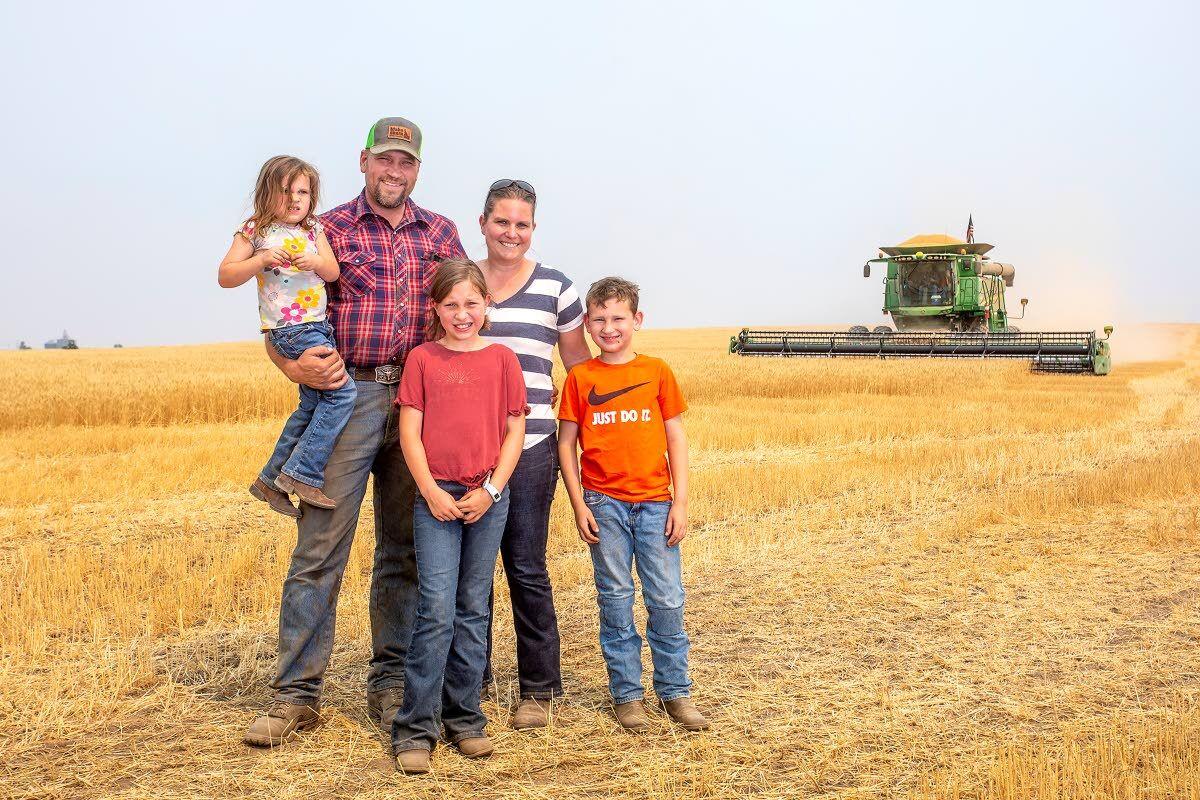 Katie Uptmor (from left), 4, Neil Uptmor, Leah Uptmor, 10, Amy Uptmor, and Cody Uptmor, 8, stand for a photo in their field as a combine prepares to pass by harvesting wheat. 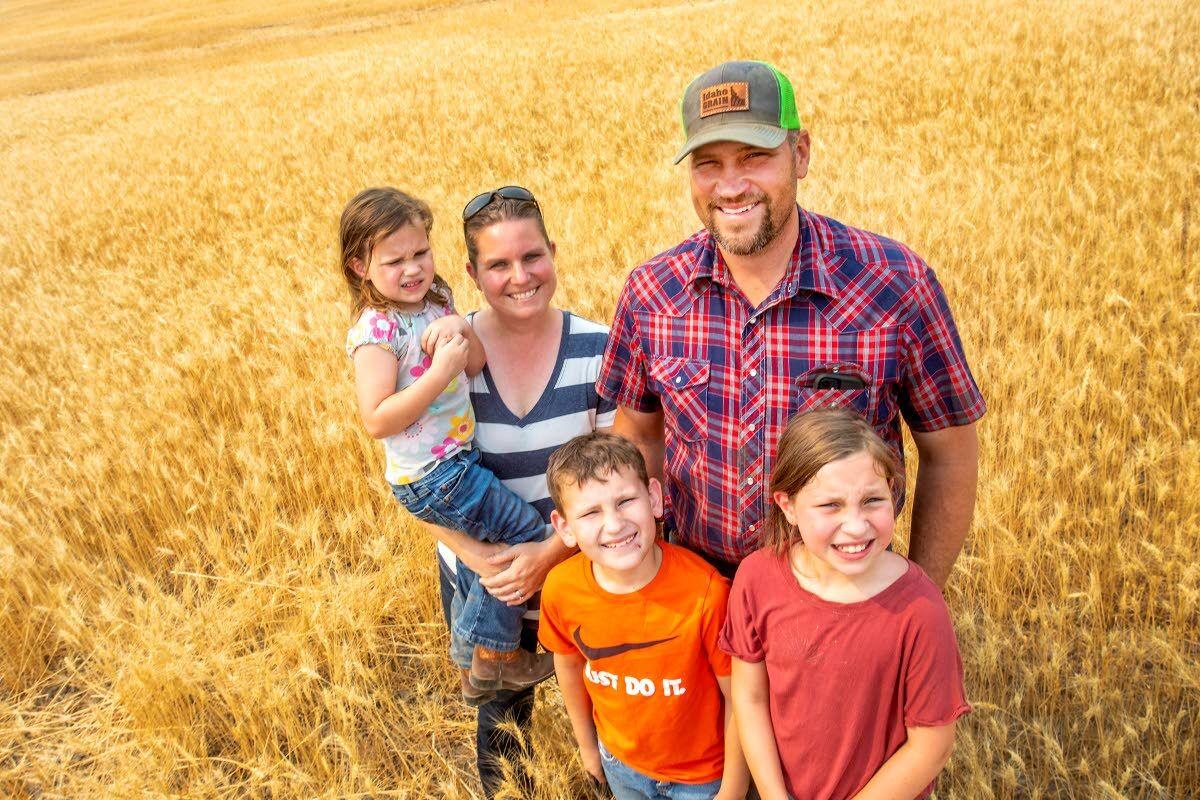 Katie Uptmor (from left), 4, Neil Uptmor, Leah Uptmor, 10, Amy Uptmor, and Cody Uptmor, 8, stand for a photo in their field as a combine prepares to pass by harvesting wheat.

Trucking a bushel of wheat 45 miles to the Port of Lewiston from Neil and Amy Uptmor’s Camas Prairie farm on a ridge above Peck costs 30 cents.

Barging that same bushel of grain about 360 miles from Lewiston to Portland on the Snake and Columbia rivers runs 66 cents, Neil Uptmor said.

Those pennies loom large in the debate about breaching the four lower Snake River dams, an issue that has been pushed into the spotlight in recent months.

Breaching may or may not work, Simpson has said, but without dramatic action he believes the fish will likely go extinct.

Farmers, who in recent years have gotten about $5 to $7.50 a bushel for soft white wheat, are the ones who stand to lose the most if slack water disappears.

Most of the wheat raised in north central Idaho and southeastern Washington is shipped to Portland where it is loaded onto oceangoing vessels that take it to buyers overseas who make it into inexpensive foods like Asian noodles.

The affordability of getting wheat to Portland, along with fertile soil and a climate uniquely suited for raising wheat, makes farming sustainable on the Palouse and Camas Prairie, said the Uptmors, who are sixth-generation farmers.

That economic reality has prompted agricultural organizations such as the American Farm Bureau Federation to come out against a $33 billion plan from Simpson. The congressman has proposed breaching Lower Granite and Little Goose dams in 2030 and Lower Monumental and Ice Harbor dams the following year.

Included in the $33 billion is $3.75 billion for farmers, agricultural cooperatives, ports in the Lewiston-Clarkston Valley and the Tri-Cities, and barging companies.

Simpson has noted he isn’t drafting legislation that would make his thoughts a reality. He wants the industry to create a plan about how to meet the challenge of getting grain to market if the dams were breached and has shared two scenarios that involve putting grain on barges at the Tri-Cities instead of Lewiston.

“With coming advances in electric trains, we might be better off and closer to zero emissions in replacing barging to the Tri-Cities with zero emission trains,” he said in an email last week.

The Uptmors have been pressing Simpson and his staff for more details in a discussion conducted by email, telephone calls and a meeting Simpson attended in McCall of the Idaho Grain Producers Association.

They are among the grain producers encouraging Simpson to visit the area. They want Simpson to learn more about the heavy toll his proposal would take on individual farmers, field questions about his plan and see the numerous steps farmers are taking to save fish.

Simpson hasn’t indicated if he will travel to north central Idaho and southeastern Washington.

He has had many discussions with farmers and others in the agricultural industry in four years of learning about the issue, Simpson said.

The Uptmors are concerned about their way of life. And they worry about families oceans away who might go hungry if they couldn’t afford foods made from grain raised in the Pacific Northwest.

“It’s interesting how capital intensive farming is,” said Amy, an engineer who works for JUB Engineers in Moscow.

“We pretty much throw all of the money we make in farming back into the farm,” she said. “We’re able to live off my wage. … As a family we can certainly survive, but we wouldn’t have the farming lifestyle.”

Her husband said he feels the same way.

“There’s too many changes to even know how it could affect us, and I guess that’s why we’re not willing to even talk about that as an option,” said Neil, who works full time on the farm. “The other frustrating thing is even when you talk to (breaching supporters) they say they can’t guarantee it will bring back fish numbers,” he said. “Why are we talking about doing something that might not work that’s going to cause such massive turmoil?”

As the Uptmors talked in a shop where they repair and maintain farm equipment, Amy’s dad was driving a combine harvesting spring wheat in a field in the Tammany area that has been in her family for decades. Her cousin, Terry Wagner, was delivering the grain to the family’s storage bins.

Their children eavesdropped as they played nearby. Katie, 4, volunteered what she likes about harvest.

“You get to see the header cut the wheat,” she said. “Our combine goes fast.”

Her sister, Leah, 10, said she likes the opportunities she has to be outside and would be interested in someday inheriting the operation.

“You have plans for the day and then something could break down, and then you have to find something else to do,” she said.

The questions the Uptmors have about breaching reach beyond the impact it might have on their family.

Key players need to be sure they have enough information to make sound decisions, the Uptmors said.

They believe the net impact would be harmful, not helpful to the environment, between the loss of power generated by dams and the increase in carbon emissions associated with getting grain to the Tri-Cities with trucks and trains.

If the environment were a tree, fish would be a branch of the tree, Amy said.

“There’s other branches of the tree, and if we just focus on that fish and ignore the rest of the tree, pretty quick our tree is dead,” she said.

Simpson has a different point of view.

His belief, he said, is that Palouse and Camas Prairie farmers can be protected now and into the future with resources on hand instead of waiting until it’s too late to save the fish, and no money or options are available.

“In the coming years, I believe, climate change is going to require more adaptation in a lot of these areas to mitigate the impacts on salmon and the ports,” he said. “We are seeing snowpack depleting earlier in the mountains and reducing moisture in the West. Each summer it seems the fire seasons are getting worse.”

The Uptmors also want to know more about how Simpson arrived at the amount in his proposal allocated for shippers and farmers. They fear the actual cost of bolstering rail lines and other infrastructure could be much more than the $3.75 billion identified for that purpose.

More facts aren’t the only thing that’s missing in the debate about breaching, the Uptmors said.

There needs to be recognition for the practices many farmers already follow to help fish.

The Uptmors, for example, build small dams in gullies that prevent soil from eroding and depositing in rivers.

“We try to catch water before it starts accumulating speed and volume,” Neil said. “Then you pipe it underground to a safer place.”

They also spend $12 to $15 per acre on a stabilizer that prevents nitrogen fertilizer from running off the fields in water. The product helps by making the nitrogen more available to crops, but it also prevents the fertilizer from polluting waterways.

“We do all of the things the experts say we should do because we want this to last for our families,” Neil said. “We can’t squander this and not be able to pass it on to someone.”

Neil Uptmor, 42,is the owner of Neil Uptmor Farms. His wife, Amy Uptmor, 39, does the bookkeeping for the business and works at JUB Engineers as an engineer where she has projects such as helping the rural communities of Cottonwood and Nezperce comply with the Clean Water Act.

Educations: He has an associate degree in auto mechanics from Lewis-Clark State College. She has a bachelor’s degree in civil engineering from the University of Idaho.

Career histories: He grew up on a family farm in Keuterville and started driving tractor around the age of 5, learning self-reliance. His dad told him to work until he broke down, then shut down and get help. He worked for a utility contractor after college, then as owner of Intermountain Feed until he sold in 2008 to begin farming. She went to work at JUB Engineers in 2005.

Civic involvement: Members of All Saints Catholic Parish in Lewiston.

Business history: The Uptmors run two farms, one on the Camas Prairie near Peck that has been in the family for six generations and another in Tammany that has been in the family for four generations. They raise soft white winter and spring wheat along with dried peas, canola, garbanzo beans, barley, alfalfa and lentils as rotational crops. They also raise cattle near their Camas Prairie farm and at Lewiston.

U.S. Rep. Mike Simpson, an Idaho Congressman, has shared two scenarios about how $3.75 billion in his breaching proposal for the agricultural industry and shippers might be used.

A total of $3.75 billion would be placed in a nonprofit Agriculture Transport Trust this year. Assuming a 3.75 interest rate, that would grow to $5 billion by 2030 when two of the four dams would be breached.

At that stage, the fund could generate $188 million annually, which would be enough to give farmers from the Camas Prairie and the Palouse a $1.99-per-bushel credit on grain they put on barges at the Tri-Cities. That compares with the 50 cents- to 75 cents-per-bushel cost to barge grain from Lewiston to Portland now, according to Simpson’s scenarios.

No infrastructure upgrades are included in that scenario.

The numbers are based on 95 million bushels annually, a figure attributed to a five-year average from the Army Corps of Engineers.

The board of the trust would include agriculture directors from Washington, Idaho, Oregon and Montana, as well as farmers, shippers and deans of the departments of agriculture from the four land-grant universities in those states.

The board could direct the annual annuity from the fund for things other than the credits, like university research.

This scenario would put $2.3 billion in the trust, which would reach $3 billion by 2030, resulting in a credit of as much as $1.21 per bushel to qualifying farmers.

Another $1.5 billion would be used to update rail, storage, port and barge infrastructure.