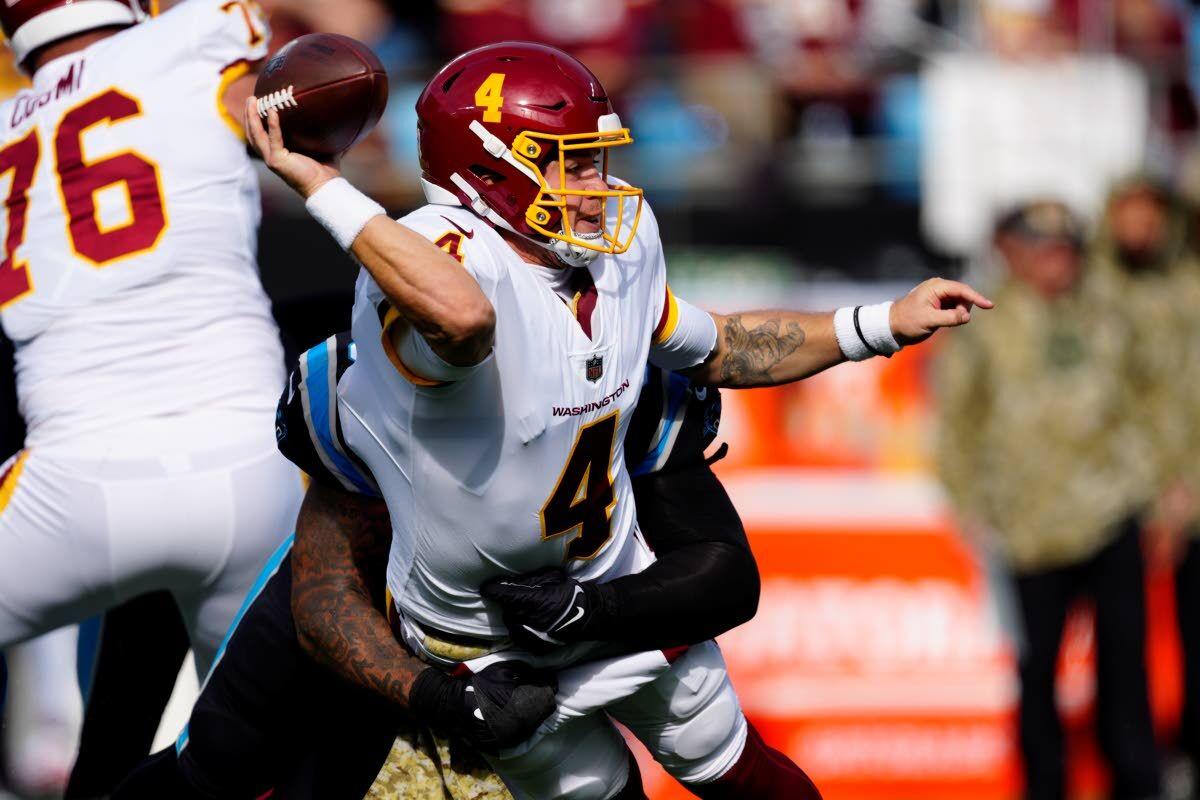 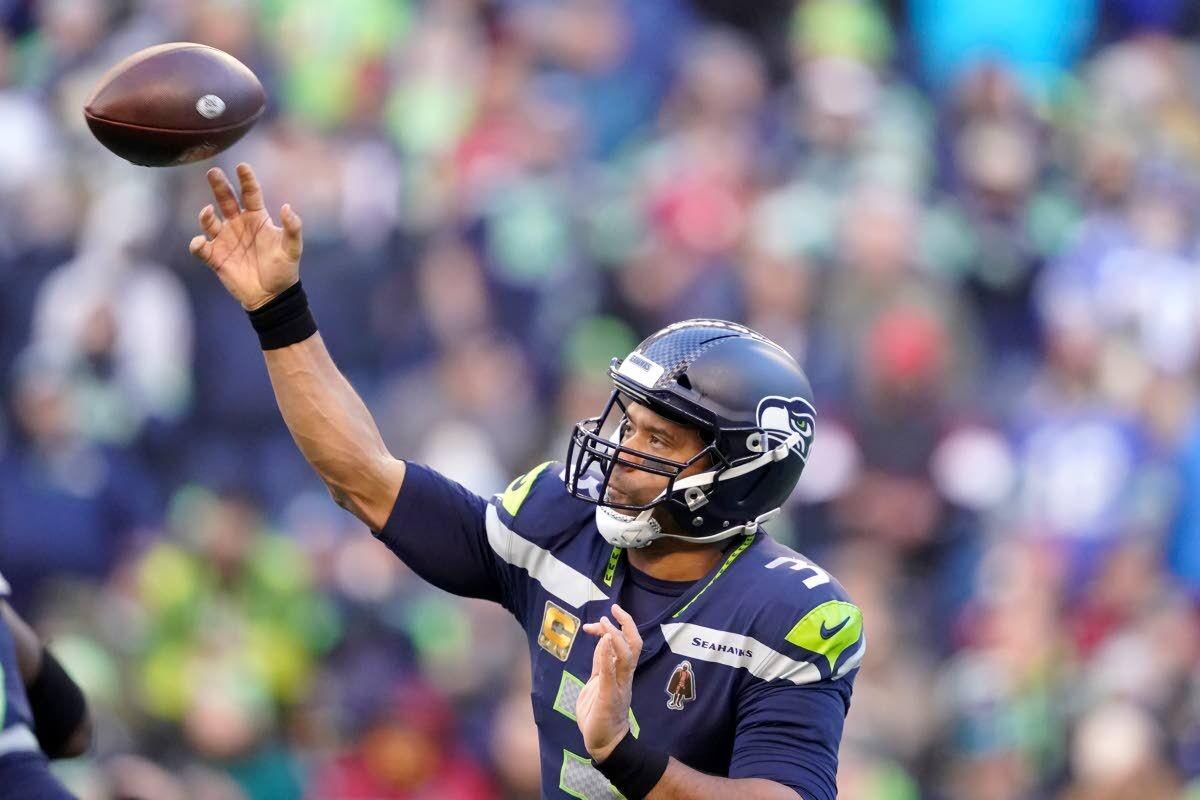 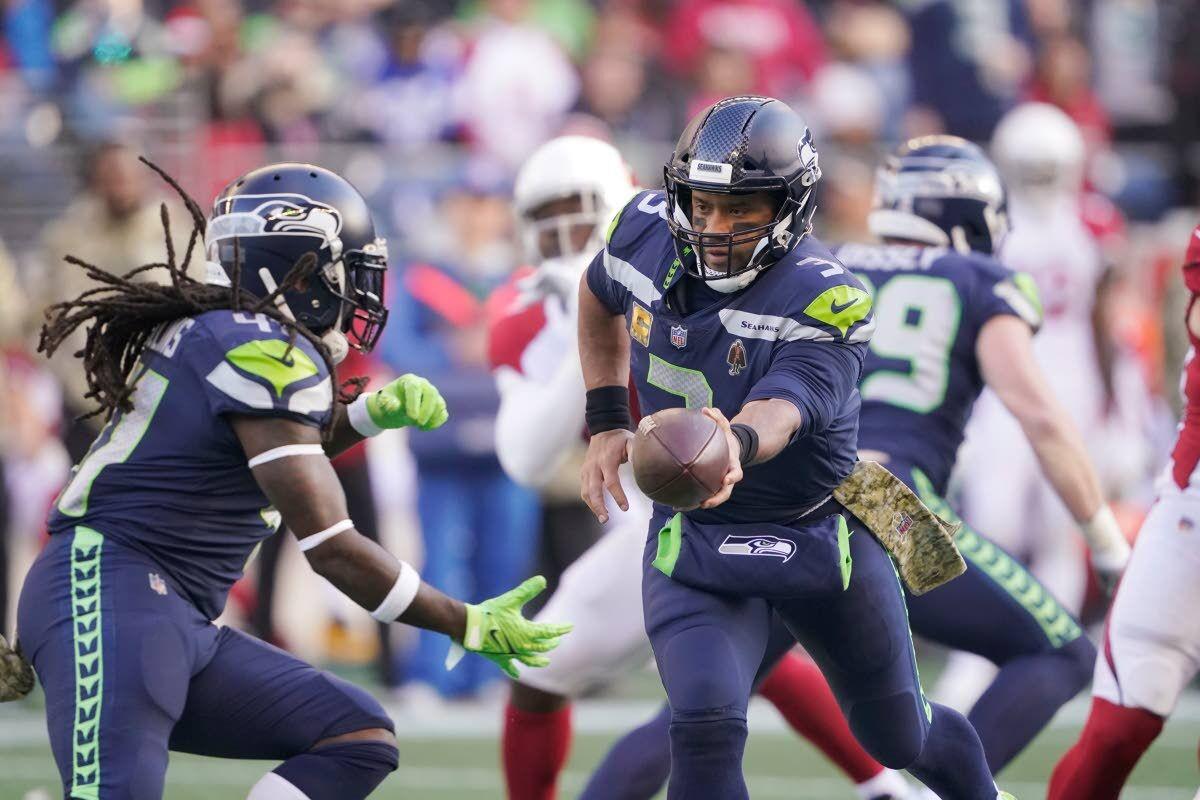 Seattle Seahawks quarterback Russell Wilson, right, hands off to running back Alex Collins against the Arizona Cardinals during the first half of an NFL football game, Sunday, Nov. 21, 2021, in Seattle. (AP Photo/Ted S. Warren) 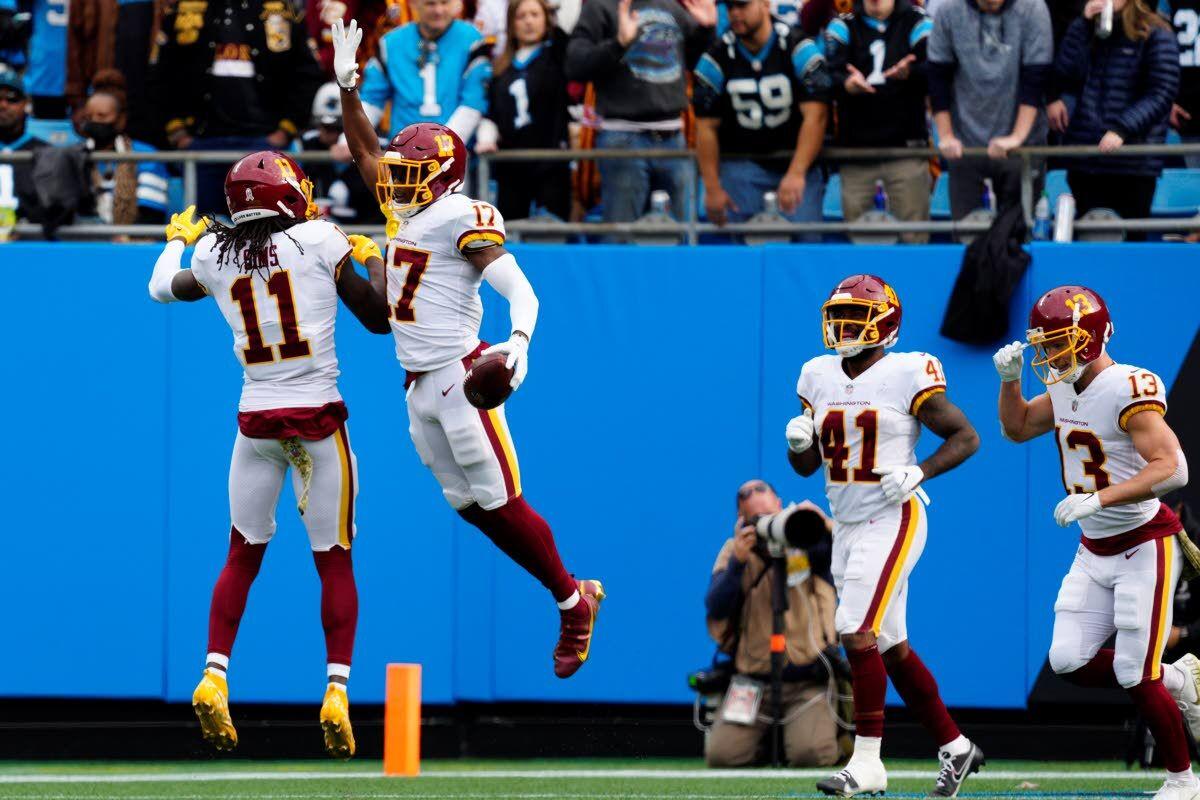 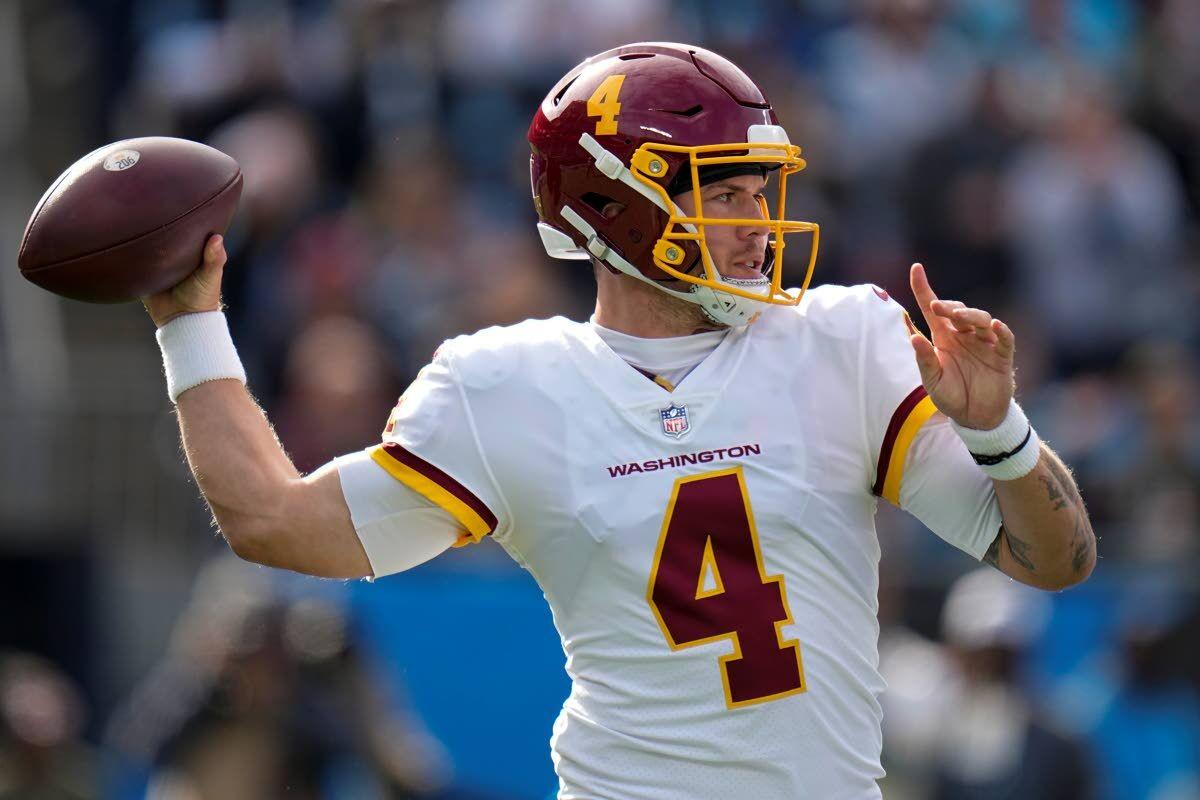 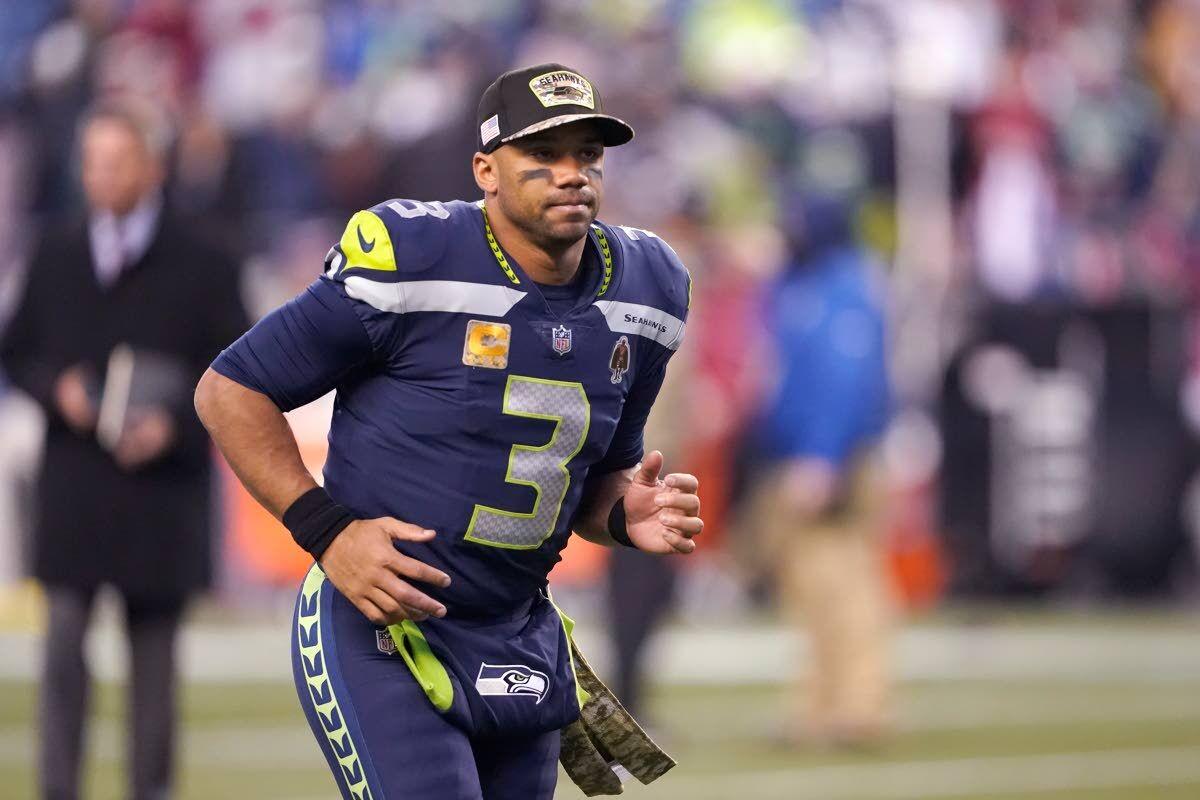 Seattle Seahawks quarterback Russell Wilson runs off the field after his team lost to the Arizona Cardinals in an NFL football game, Sunday, Nov. 21, 2021, in Seattle. (AP Photo/Ted S. Warren)

Seattle Seahawks quarterback Russell Wilson, right, hands off to running back Alex Collins against the Arizona Cardinals during the first half of an NFL football game, Sunday, Nov. 21, 2021, in Seattle. (AP Photo/Ted S. Warren)

Seattle Seahawks quarterback Russell Wilson runs off the field after his team lost to the Arizona Cardinals in an NFL football game, Sunday, Nov. 21, 2021, in Seattle. (AP Photo/Ted S. Warren)

LANDOVER, Md. — Taylor Heinicke saw what Russell Wilson was doing in college and the NFL and wanted to emulate him as a mobile quarterback.

Heinicke will get that opportunity Monday when he and Washington host Wilson and the struggling Seattle Seahawks. Washington has won two in a row to move to the fringe of the NFC playoff race, while the Seahawks are off to their worst 10-game record under coach Pete Carroll and are looking to avoid their first three-game losing streak with Russell as the starting quarterback.

It’s another big stage for Heinicke, who a year ago was out of football and seems to raise his game under the bright lights. Washington has not won a Monday night home game since 2012 when Robert Griffin III was the team’s quarterback as part of the notable rookie class that also included Wilson.

“Anytime you get to play at night, prime-time television, everyone’s watching,” Heinicke said. “It’s an exciting time, and everyone in that locker room understands that it’s an opportunity for us to show what we’ve got to the rest of the world. We played well the last two weeks and we just wanted to keep that rolling.”

Washington has rejuvenated some postseason hopes by beating defending champion Tampa Bay and Carolina to improve to 4-6. Things are less sunny for Seattle, which is coming off losses to Green Bay and Arizona since Wilson returned from a finger injury.

“Some of the games that we let slip away, a lot of it has come down to us getting in our own way, whether it’s been from penalties, or mistakes that we have made,” Seahawks linebacker Bobby Wagner said. “A lot of times, if you listen to the outside world and the people that are not in the building, they are talking about the end of the season. You can’t talk about the end of the season because the moment you look forward, you miss the moment in front of you, and a team that shouldn’t beat you will beat you.”

Should Washington beat Seattle? The Seahawks opened as a 3½-point favorite on FanDuel Sportsbook, with the betting line quickly moving to Washington minus-1.

The recent play of coach Ron Rivera’s team has shifted the perception of Washington from an also-ran to potential playoff contender. The NFC East looked out of reach, but a victory would put Washington within two games of division-leading Dallas with two games against the Cowboys — plus two against the Eagles and one more against the Giants — left on the schedule.

“If we can put ourselves in position to get to December where we have five divisional games left, who knows?” Rivera said. “We have to take care of our business.”

CORNERBACK QUESTION — Seattle’s starting cornerback opposite D.J. Reed was an unsettled position through the first quarter of the season until rookie Tre Brown got healthy. It’s back to being unsettled after Brown was lost for the rest of the regular season because of a significant left knee injury last week against Arizona. Brown underwent surgery to repair the patellar tendon.

Sidney Jones stepped in after Brown went down and played much better than he did earlier in the season. Jones seems likely to start, but Seattle’s situation is exasperated by Reed’s status. Reed didn’t play against the Cardinals because of knee and groin injuries.

ESTABLISH THE RUN — Carroll keeps saying Seattle needs to be more consistent with the run game, but for whatever the reason it’s not translating to game day. Seattle seemed intent on establishing the ground game last week against Arizona, then abandoned that plan in the second half.

Seattle had just seven run plays in the second half against the Cardinals and finished with 19 rushes in the game. It doesn’t help that the Seahawks rank last in the league in total offensive plays by a wide margin, so there’s been less opportunity to get the run game started.

When they do run the ball, he Seahawks are averaging 4.3 yards a carry, right around the middle of the pack in the league. But the Seahawks have failed to top 100 yards rushing as a team in four consecutive games.