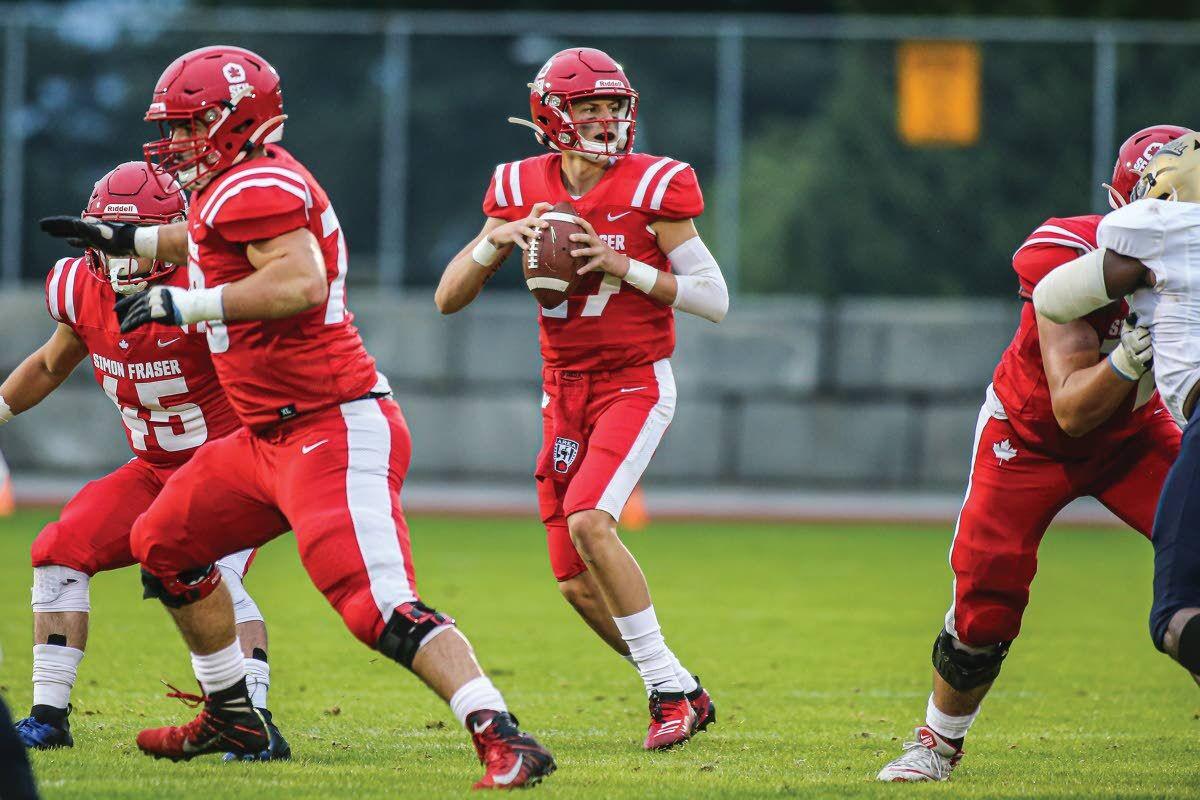 Simon Fraser sophomore quarterback Brandon Niksich drops back to throw during a 2019 game. Niksich will lead SFU into its first game in two years Saturday at the Kibbie Dome against Idaho. 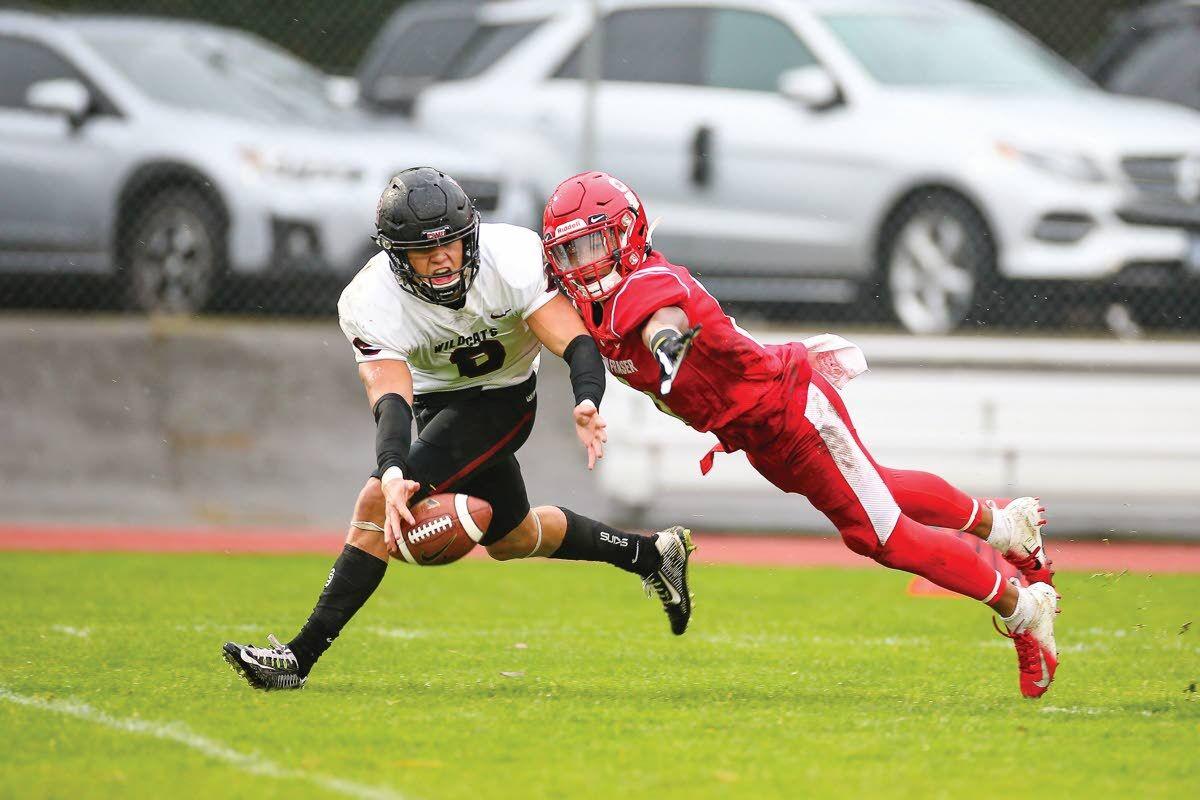 Simon Fraser defensive back Jerrell Cummings attempts to make a play during a 2019 game. Simon Fraser will be playing its first game in two seasons Saturday when it takes on Idaho at the Kibbie Dome.

Simon Fraser sophomore quarterback Brandon Niksich drops back to throw during a 2019 game. Niksich will lead SFU into its first game in two years Saturday at the Kibbie Dome against Idaho.

Simon Fraser defensive back Jerrell Cummings attempts to make a play during a 2019 game. Simon Fraser will be playing its first game in two seasons Saturday when it takes on Idaho at the Kibbie Dome.

Simon Fraser University is home to one of the most unique situations in college football.

The Division II program out of the Great Northwest Athletic Conference is the only team in Canada competing in the NCAA.

Simon Fraser, which is undergoing a nickname change from its previous moniker, the “Clan,” will play its first football game in almost two years at 1 p.m. Saturday against Idaho in the Kibbie Dome.

“We are the only team outside of the United States that plays American football in the NCAA, so it’s really exciting, it makes us unique,” first-year coach Mike Rigell said. “We kind of feel like it’s kind of our own Canadian Olympic team.”

Rigell faced a tall order when he took over a 1-9 Simon Fraser team in March 2020. He took the job just two days before COVID-19 shut everything down.

During the next 16 months, Rigell and his staff had to implement their style, conduct recruiting and make sure their players were set academically and mentally all without really being able to meet as a team.

Talk about coaching — and preparing — on hard mode.

“You’re a coach, but you’re really making sure you’re taking care of your team and your program’s mental health as well as try to prepare them physically for when they do get the opportunity to go back out there and play football,” Rigell said.

Playing in another country, playing for the first time in two seasons, implementing a new coaching staff and playing a Football Championship Subdivision-level team all str obstacles Simon Fraser will have to overcome if its to beat Idaho for the first time in program history. The Vandals are 2-0 all-time in the series.

Rigell said he’s trying to keep things in perspective in a matchup with numerous unknowns.

“Every team always starts off 0-0 so there’s always a lot of excitement, a lot of hope,” Rigell said. “And I mean shoot, I get to do my debut game against coach Petrino, you know. What could be better than that?”

Here are four things to watch from Simon Fraser on game day:

Rigell is used to going up against Big Sky schools in the recruiting game. Before taking charge, the former BYU player was Simon Fraser’s receivers coach and recruiting coordinator.

“Our team is really excited for the opportunity ’cause we have guys from Washington and guys and Oregon and a few from California, so we have guys that were recruited by Big Sky schools,” Rigell said. “You always have kids who may have fallen through the cracks or whatever it may be, but when you’re playing football in high school, you always envision being a Division I player in some type of form.

“So it’s a great opportunity for our guys to play against DI players and have that opportunity to really see what it looks like.”

Both teams to play multiple quarterbacks?

Simon Fraser could be in a similar situation.

Two quarterbacks have significant experience for the Canadian team in sophomores Brandon Niksich, from Federal Way, Wash, and Justin Seiber from Covington, Wash.

Niksich stepped in and played the entire 2019 season after Seiber went down with a broken ankle, passing for 1,926 yards with 10 touchdowns and 10 interceptions in nine games.

Seiber hasn’t played significantly since 2018, when he passed for 1,116 yards with seven touchdowns and seven interceptions in eight games.

“They both have a full year of playing,” Rigell said. “Now, you don’t have a quarterback that (is a) deer in the headlights.”

Girl kicker can boot it

Female football players have been breaking into college football in recent years, but it’s still a rarity to see one on the field.

It was only in December that Vanderbilt kicker Sarah Fuller made history as the first female player to score in a Power Five football game.

Simon Fraser has its own female kicker, Kristie Elliott. The sophomore from North Vancouver, British Columbia, still is behind senior Metselaar Kees on the depth chart, but apparently she has a big leg that’s waiting and ready when needed.

“She is a football player, and at the end of the day that’s what she wants to be known as,” Rigell said. “We’re not hesitant to ever put her in the game ’cause we trust and believe in her and we know that not only can she kick an extra point, but she damn sure can kick some field goals too.”

How will SFU adjust to atmosphere?

Simon Fraser hasn’t played since falling to Central Washington 51-14 on Nov. 16, 2019. It hasn’t faced a Division I opponent since a 70-7 walloping by Portland State on Sept. 7 that same year.

SFU will have to adjust on the fly to a return to playing in front of fans on a stage bigger than they’re used to.

Rigell said the focus will be on keeping things simple — don’t go out and try to “be a hero.”

“Our team is just excited to go out and play again,” he said. “It doesn’t really matter who we’re playing. I think just being able to see officials out there, have a fanbase in the stands, actually be in a real situation in a real game is just a blessing in itself.”