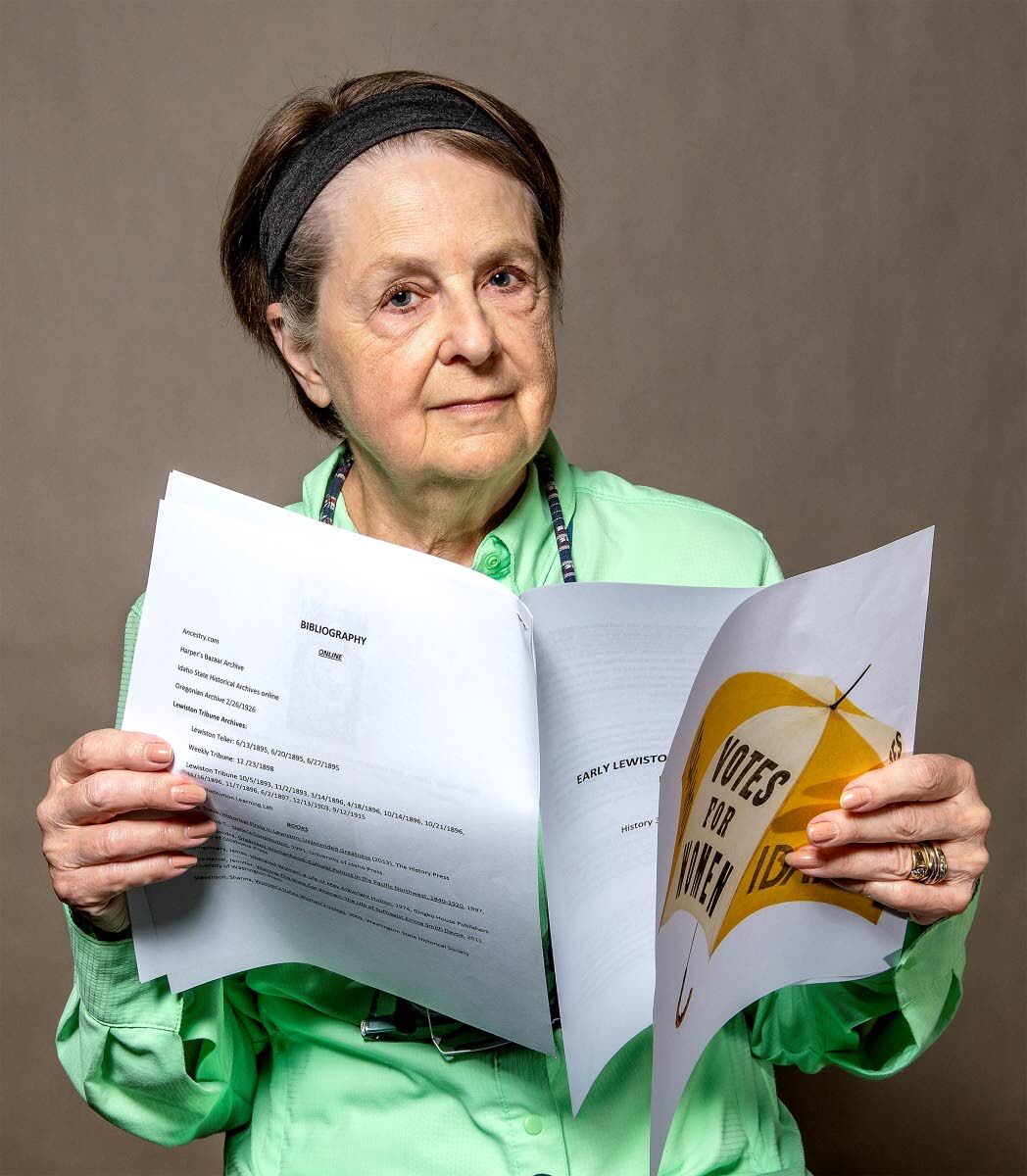 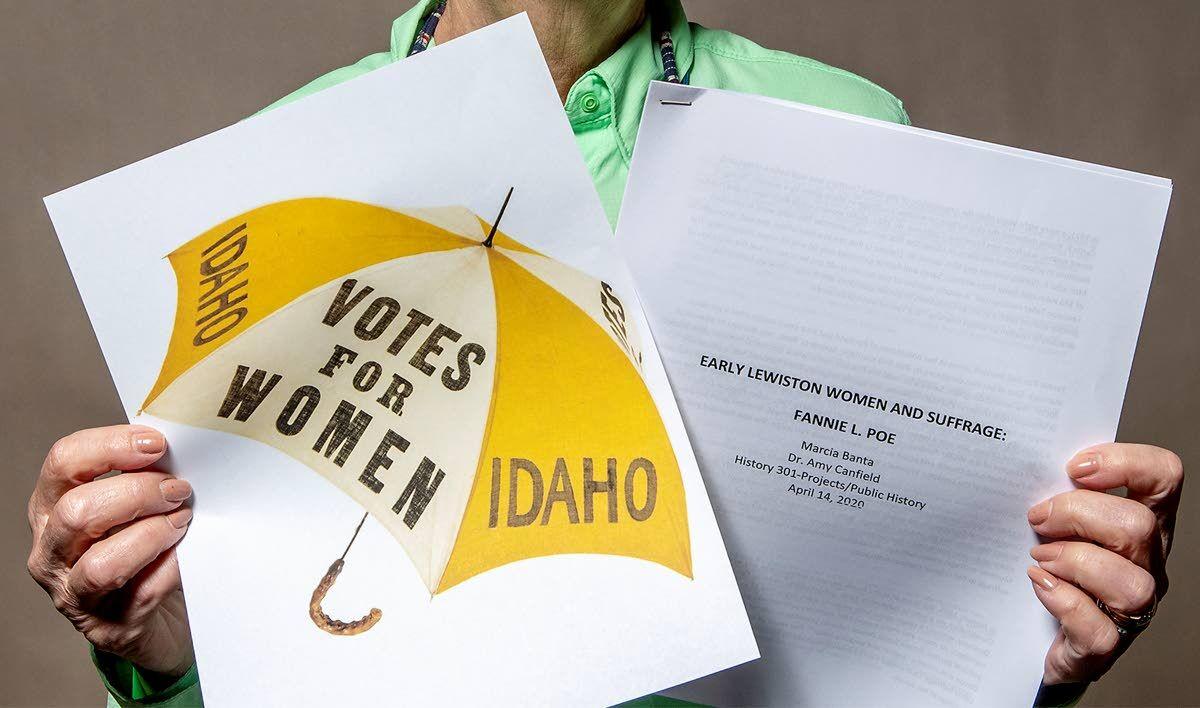 Marcia Banta found the story of early Lewiston women's suffrage figure Fannie Poe so interesting, she continued to research her even after completing a term paper she did for a class at Lewis-Clark State College.

Marcia Banta found the story of early Lewiston women's suffrage figure Fannie Poe so interesting, she continued to research her even after completing a term paper she did for a class at Lewis-Clark State College.

Fannie Poe helped found a Methodist church in Lewiston, led the town’s women’s suffrage movement for a time and had a daughter who married a prominent physician.

Yet just a few generations after her death, she is in many ways a mystery — even to those who have worked to learn more about her accomplishments.

One of those who did was Marcia Banta, a retired teachers’ union staff member. Banta learned about Poe when she did a paper for a history class at Lewis-Clark State College last winter and spring.

She hoped to learn a little about the people in Lewiston who helped Idaho become the fourth state in the nation to give women the right to vote in 1896, 24 years before national women’s suffrage.

Banta was drawn to Poe because she made herself prominent in the circles where women were permitted in her time and tried to expand that space.

“She was clearly pushing the boundaries,” Banta said.

Poe was the first head of the Lewiston Women’s Suffrage Association, a group “led by some of the most important women in town,” according to Banta’s paper.

She was the wife of James Poe, an attorney, who served as a judge.

Fannie Poe had two children, from one or more previous marriages, when she became James Poe’s wife, she said.

Similar to many other suffrage supporters, both Poes also championed temperance, Banta said.

Much of what Fannie Poe did, however, was behind the scenes. Banta never located a picture of Poe or of the other members of Lewiston Women’s Suffrage Association.

Newspapers at that time hardly ever attributed information to people using their names.

The association did place a letter in a section of the Lewiston Tribune called the “Women’s Tribune,” on Oct. 14, 1896.

It reads in part: “Did it ever occur to you, my friends, that through all of the ages no thought from a woman’s mind or soul has ever been breathed into a creed or code? And yet both church and state have always demanded more of women than of men.”

The anonymous writer continues, reminding the men who are reading the letter that “we are merely asking to be recognized as people, and have the rights of people.”

Every congressman represents 170,300 people and half of them are women, the letter states.

“The women are counted as people to form the congressional district, and required to pay their share of the congressional salary, but they are not allowed to say what kind of a man they desire for a congressman!”

If Poe wrote or edited that letter likely will never be known. Poe and another female leader of the association ran unsuccessfully for school board. Questions were raised about their ability to make financial decisions.

“That wasn’t really (considered by some to be) in their realm of womanly things,” Banta said.

Often suffrage groups turned into chapters of what is now known as the League of Women Voters.

What part Poe played in that transition has been lost to history. One of the next times Poe surfaced was in the 1910 census, where she is listed as widowed and living with one of her daughters in Portland.

Her husband appears in the same census as married and living alone at the Hotel De France at Second and D streets in Lewiston.

That discrepancy is only heightened by the obituary of James Poe in 1915 that states he doesn’t have any relatives in the Lewiston area.

Those two tantalizing clues prompted Banta to continue her research after she finished her paper.

She wonders why the Poes were living in separate towns and if it was marital discord, an illness or something else that prompted them to sever ties so completely.

“There are dozens of possibilities,” Banta said.

Fannie outlived her one-time husband by 11 years. Her death was documented in a Portland newspaper.

How she spent her time in Portland also is a mystery. Newspapers and historical archives are silent, and Banta’s attempts to find family failed too.

Poe doesn’t appear to have any ties with the Poes who continue to live in the region.

“I could find no activities or anything at all,” she said.

One of Poe’s granddaughters did eventually achieve the kind of stature that Poe had seemed to approach when she participated in the suffrage movement. Louise Carter became assistant dean of women in 1923 at the University of Idaho and served in several roles at the school, finishing her career as the dean of women from 1945-57.