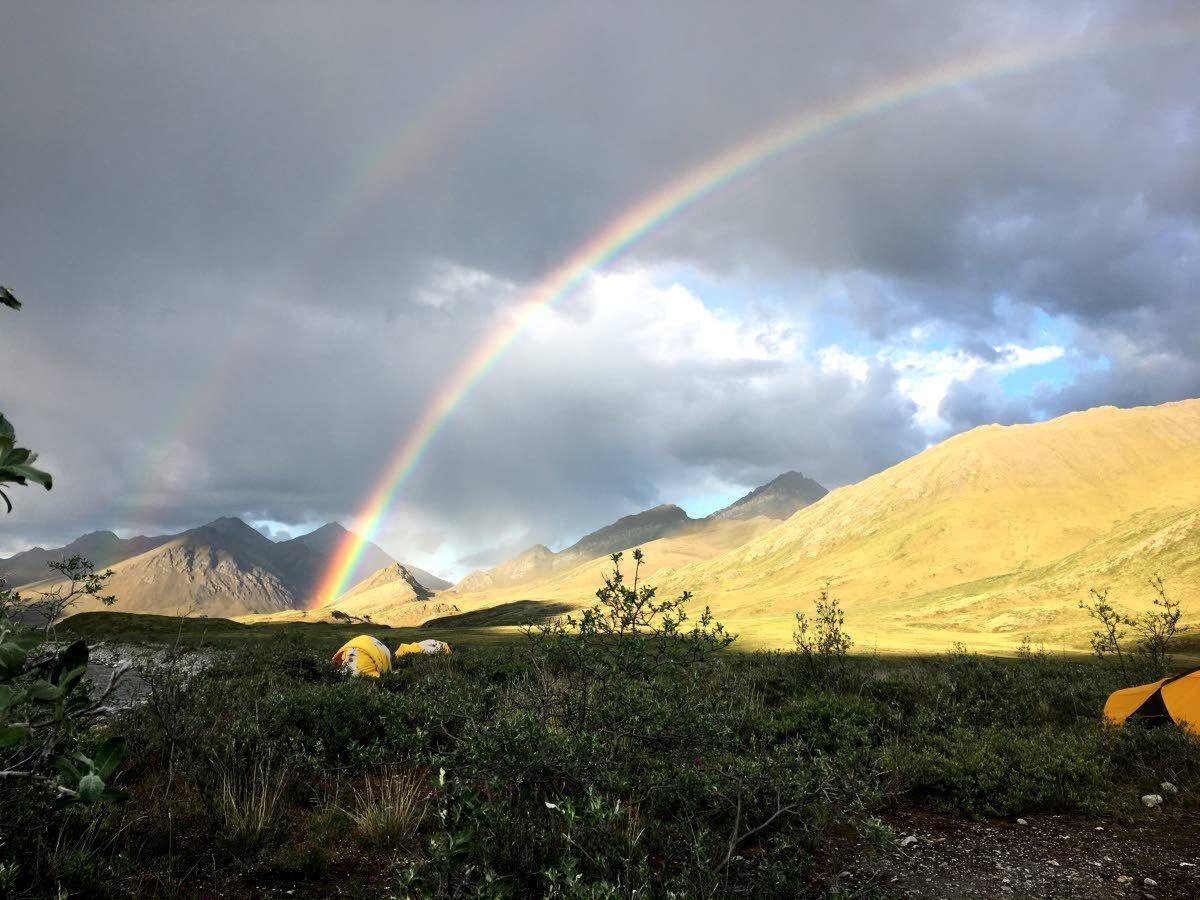 A double rainbow touches down near the Hula Hula River at the northern end of the Brooks Range in Alaska. 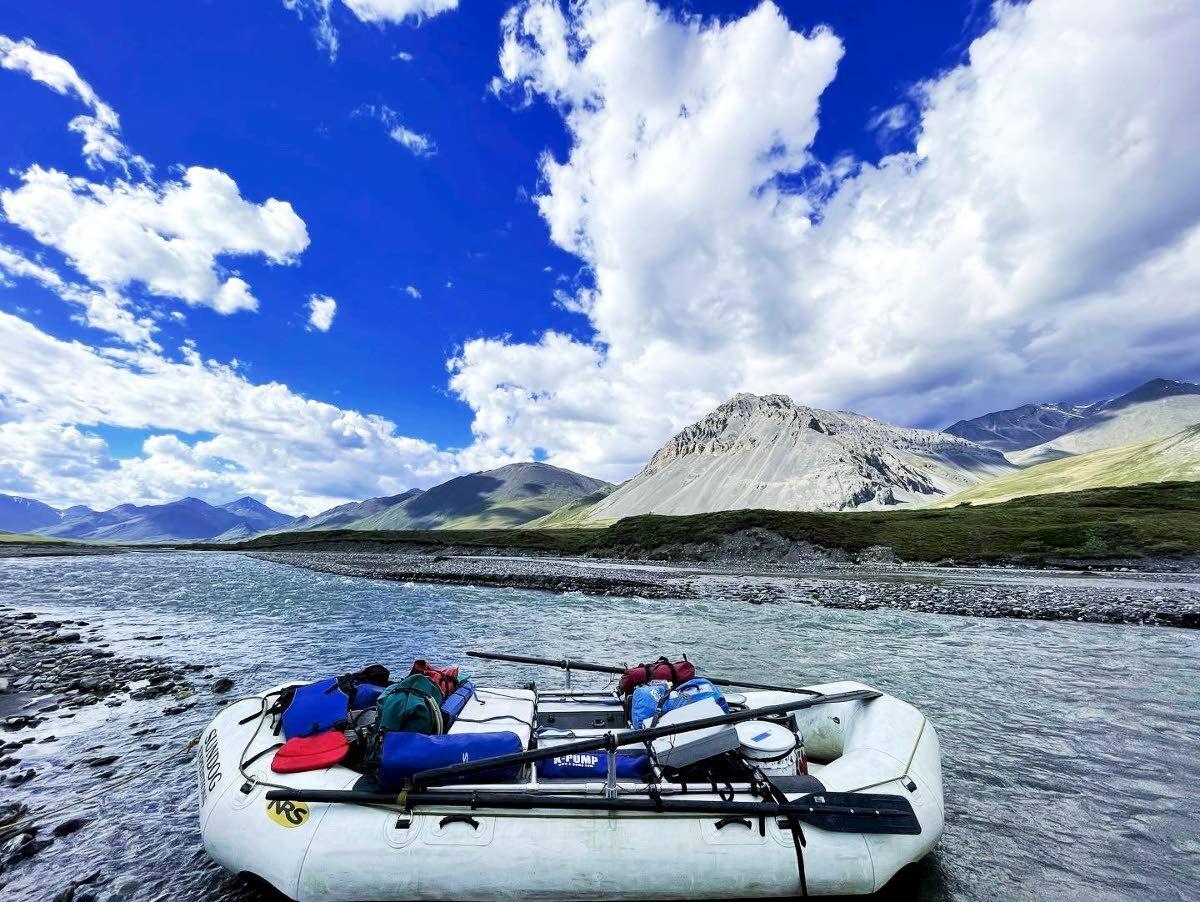 A lone gear boat awaits its next outing. Guide Hannah Binninger rowed this boat 100 miles down the Hula Hula River in Alaska. 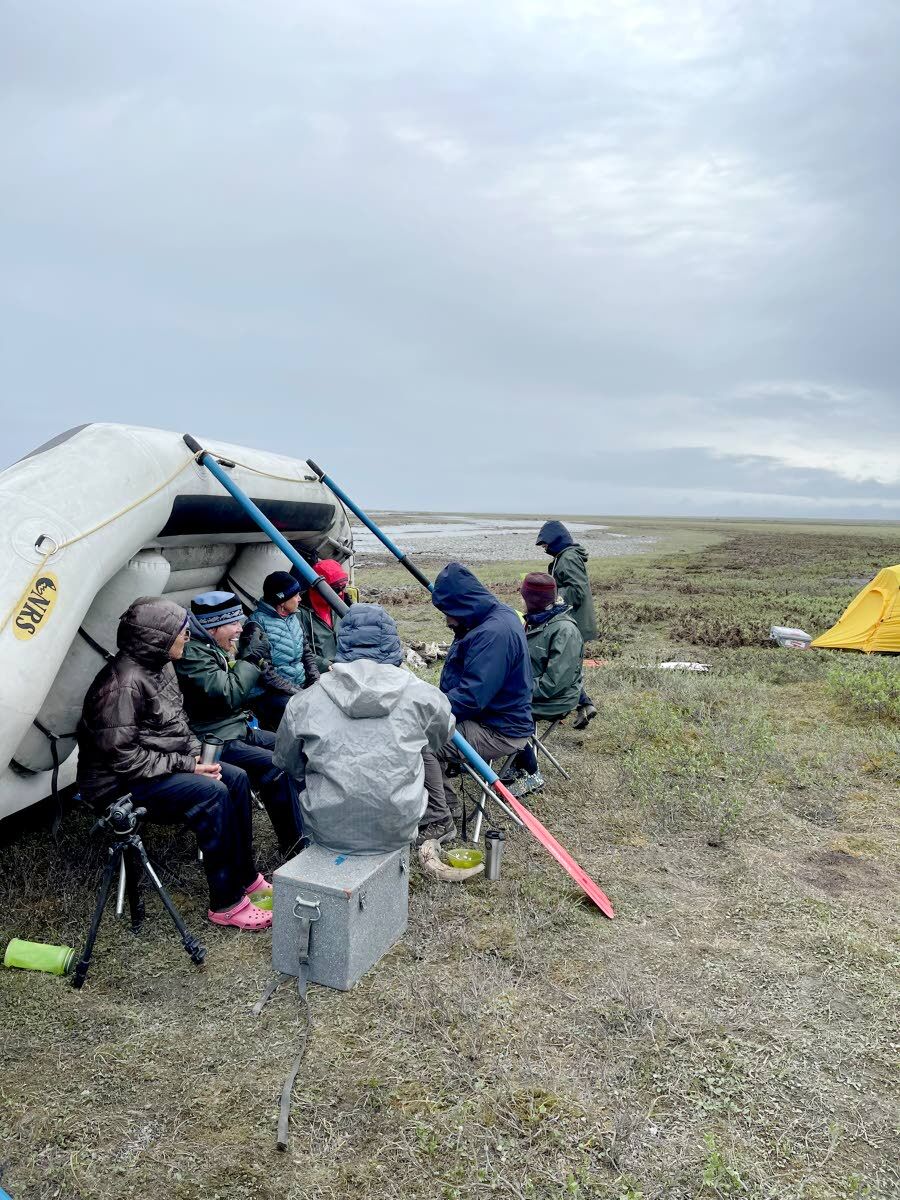 With no trees to break the fierce Arctic wind, the rafting group had to improvise for shelter. 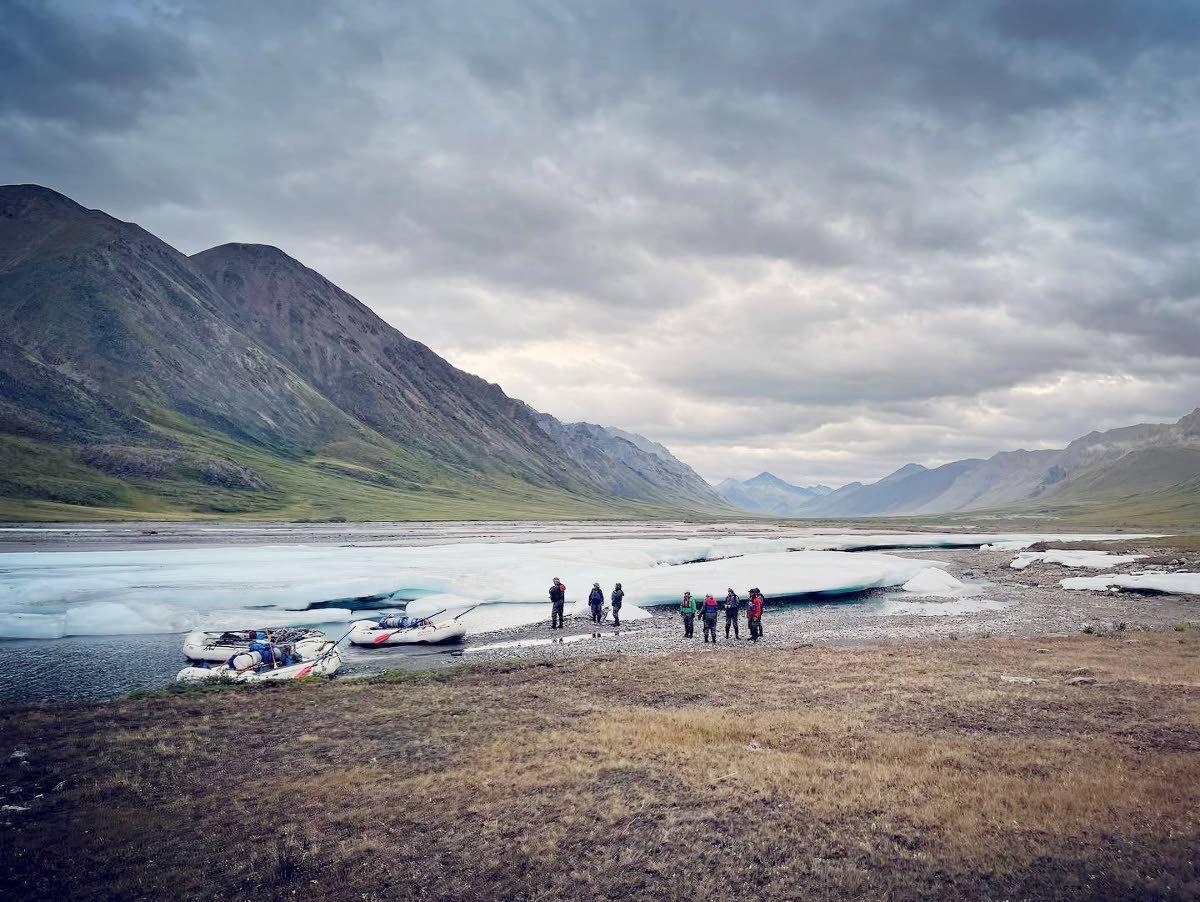 A double rainbow touches down near the Hula Hula River at the northern end of the Brooks Range in Alaska.

A lone gear boat awaits its next outing. Guide Hannah Binninger rowed this boat 100 miles down the Hula Hula River in Alaska.

With no trees to break the fierce Arctic wind, the rafting group had to improvise for shelter.

As the calendar descends to the darkest days of the year, a few Moscow, Pullman and Lewiston area residents are still buzzing from a memorable river trip last summer. Their voyage down the Hula Hula River, in far northern Alaska, began on the summer solstice, and for 12 days in a row, the sun never set.

It was a 100-mile journey filled with vast sweeps of blooming wildflowers, majestic scenery and glimpses of the world as it used to be. There were hardships as well, with a five-day Arctic storm, an unexpected waterfall and a last-chance portage. It was a true wilderness adventure, filled with setbacks and successes, laughter and misery.

“It’s really wild, really remote country,” says Hannah Binninger, one of the guides who rowed a heavy gear boat by herself (see related story at right). “When the weather comes in, it is extreme. When the wind blows, it really blows.”

“But there was no darkness,” Binninger adds, “so the light was fascinating.”

“It is the most amazing country, and I want to go back again,” says Tom Besser, a Washington State University professor who was on the trip. In fact, it was Besser’s second river trip in northern Alaska — and he still hasn’t gotten his fill.

The scale of the landscape is staggering, which is the norm for Alaskan rivers. The Hula Hula flows north from its headwaters in the Brooks Range, carving a jagged path across the North Slope of the arctic plain before emptying into the Beaufort Sea, which is effectively part of the Arctic Ocean. Along the way, it courses through the 19.2-million-acre Arctic National Wildlife Refuge (ANWR) which, at that time of year, is the venue for enormous animal migrations — particularly caribou.

The trip was organized by Moscow-area outfitter Lonnie Hutson and his company, Sundog Expeditions. In addition to Hutson and Binninger, there was one other guide and seven guests who paid about $6,300 apiece. Over the course of 12 days, the group encountered only two other parties: another commercial raft trip and a small, private group paddling pack rafts.

After gathering in Fairbanks, the Sundog Expedition flew in small bush planes to a lumpy swath of tundra next to the Hula Hula. Weight limits were strictly enforced, so the entire expedition — including three rafts, all the equipment, food and humans — didn’t exceed 3,750 pounds.

When the last plane departed, there was only one direction for the party to go.

The group was hoping to see some of the vast caribou migrations for which the area is famed, “but this trip was a little low on wildlife,” Hutson says. “ANWR is unpredictable that way, because we’ll see thousands and thousands of animals on some trips, and then other times it’s just a few hundred.”

The caribou had already shifted east, into arctic Canada, by the time the group arrived. When they did see caribou, they were usually in bands of six to eight animals.

For Besser, who works in the vet school at WSU, the paucity of caribou was offset by the profusion of birds.

“Some of the coolest birds we sometimes/often see on the Palouse in mid-winter were doing their breeding/nesting things on the tundra,” Besser said in an email. Along the way, he spotted Longspurs, Golden Plover, Golden Eagles, Peregrine Falcons, Rough-legged Hawks, Snowy Owls, Northern Shrikes, Parasitic- and Long-tailed Jaegers and the wonderfully named Wandering Tattlers.

For much of its length, the Hula Hula loops and braids across the Arctic tundra. New channels are etched through gravel beds and old channels are abandoned. Always silty, the river plunges through two distinct canyons that generated several big whitewater days, Binninger says.

The rapids were well within the guides’ abilities, but there was another navigational hazard that kept them on edge: vast sheets of ice, as much as six feet thick, known as aufeis.

A German term that translates as “ice on top,” aufeis is formed by groundwater discharge from the wet, boggy tundra. Water wells up from the earth, then freezes when temperatures are low — which they usually are in the Arctic. In its growth phase, aufeis expands vertically as new ice is created underneath.

The upshot is enormous sheets of ice, sometimes miles long.

When temperatures rise and the ice begins to melt, danger appears in the form of cold, fast-moving streams. One minute, a stream of meltwater can be burbling along at the surface, but the next minute it can disappear under a sheet of ice exactly like a river flowing beneath its frozen surface.

Anyone unfortunate enough to be in the water would be swept under the ice, likely to die.

One of the spookiest episodes of the entire trip occurred out on the tundra, when high winds forced the party to stop for the night.

“In exploring around the camp, we found that we had been in a channel diverted by the aufeis that was actually cutting across the tundra,” Besser says. “There was a waterfall just a quarter mile downstream from our camp that we would have encountered if we hadn’t stopped.”

The waterfall was formed when the wayward river found its way back to the original channel, cascading down the bank to rejoin the streambed.

“It was the first tundra waterfall I’d ever encountered,” Hutson says, “and it was a big, powerful waterfall that would have flipped any of our boats.”

The group’s original goal was to paddle all the way to the Beaufort Sea, but the last few miles demand a big, open-water crossing that didn’t seem like a good idea at the time.

“There was a north wind blowing and it was awful cold,” Hutson says, adding, “It’s a risk to do that crossing.” So the party pulled out and waited for the bush planes about five or six miles shy of the salt water.

“It was a hard decision to stop,” Binninger recalls, “because a lot of people wanted to go all the way.

“But I didn’t see it as a failure. I’d say it was a smart decision.”

Brock is an avid paddler and occasional writer who lives in Pullman.

“It is the most amazing country, and I want to go back again.”

“It’s really wild, really remote country. When the weather comes in, it is extreme. When the wind blows, it really blows. ... But there was no darkness, so the light was fascinating.”

Hannah Binninger, Pullman resident and one of the trip guides

You run into them now and then, people doing the same juggling act as everyone else — consumed by kids, careers and the commitments of daily l…