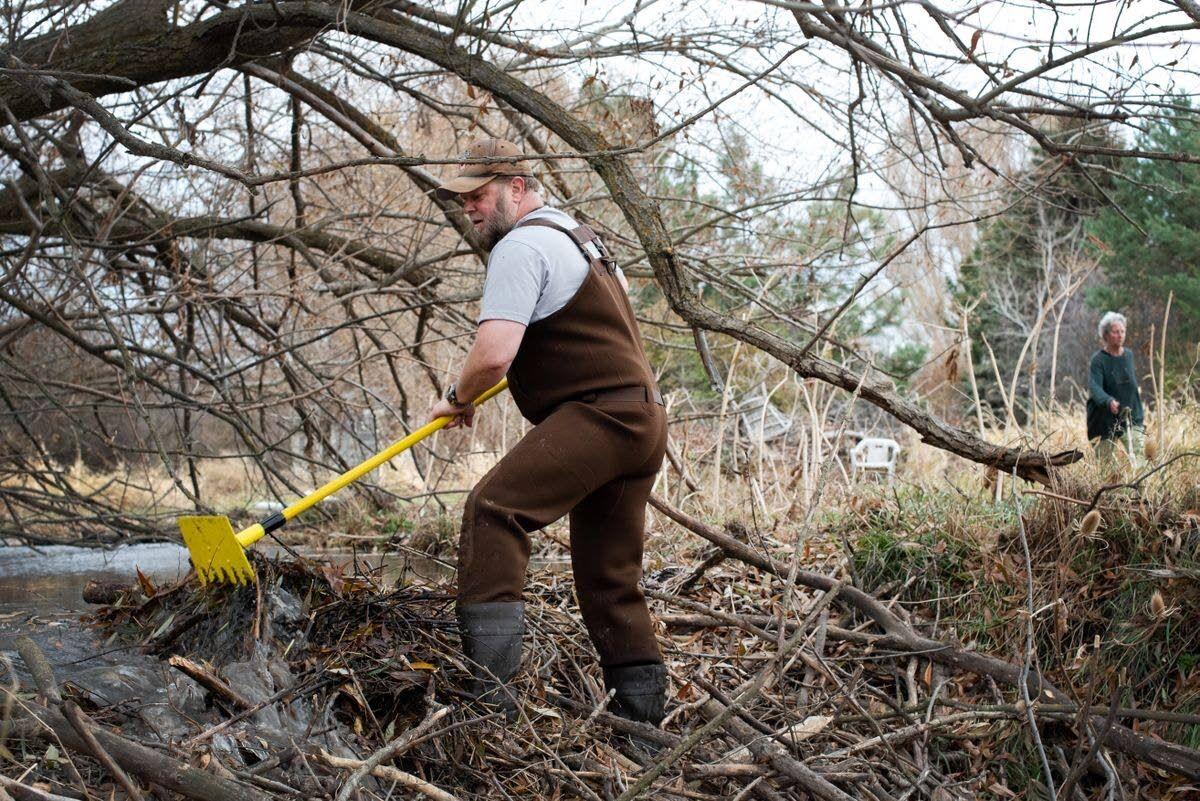 With landownder Linda Jovanovich looking in (background, far right), Chris Bachman breaks holes in a beaver dam to lower the level of the pond it created. He then installed a drain pipe to keep the pond from growing too large. 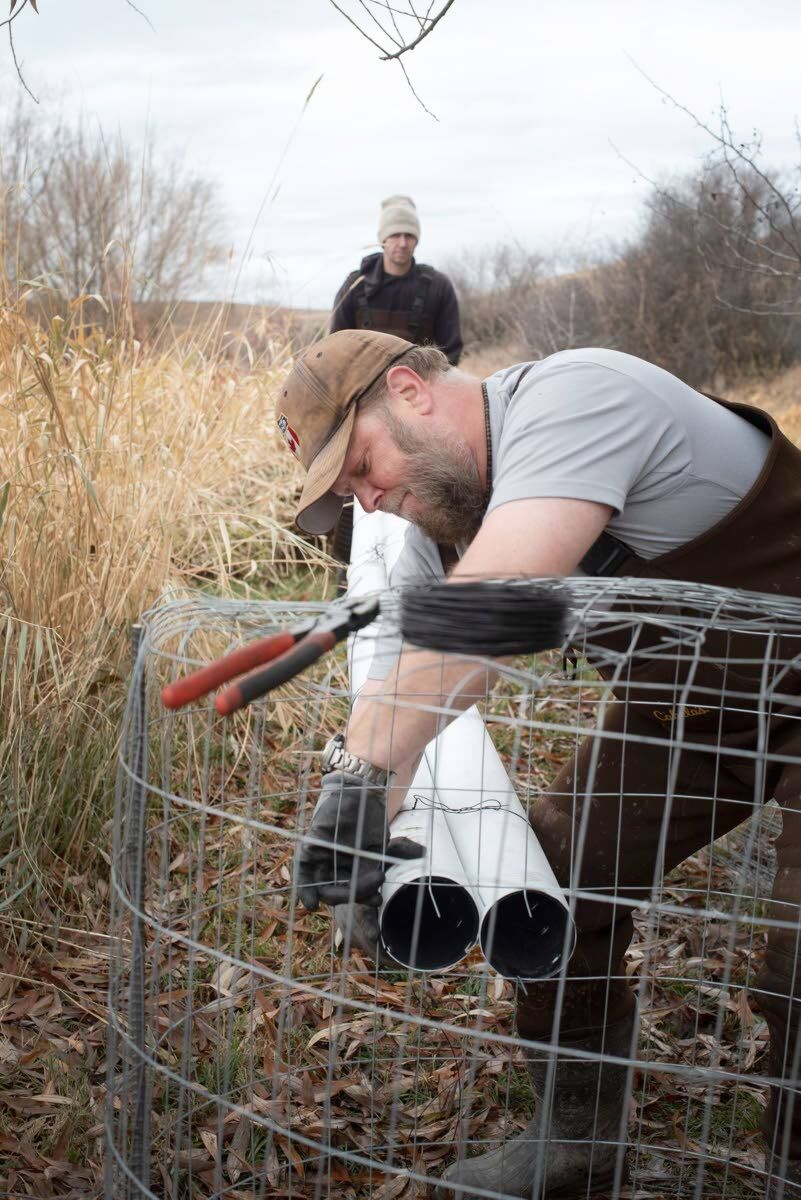 Bachman, the wildlife director for the Lands Council, and Ben Goldfarb, the author of “Eager: The Surprising, Secret Life of Beavers and Why They Matter,” build a flow-mitigation device 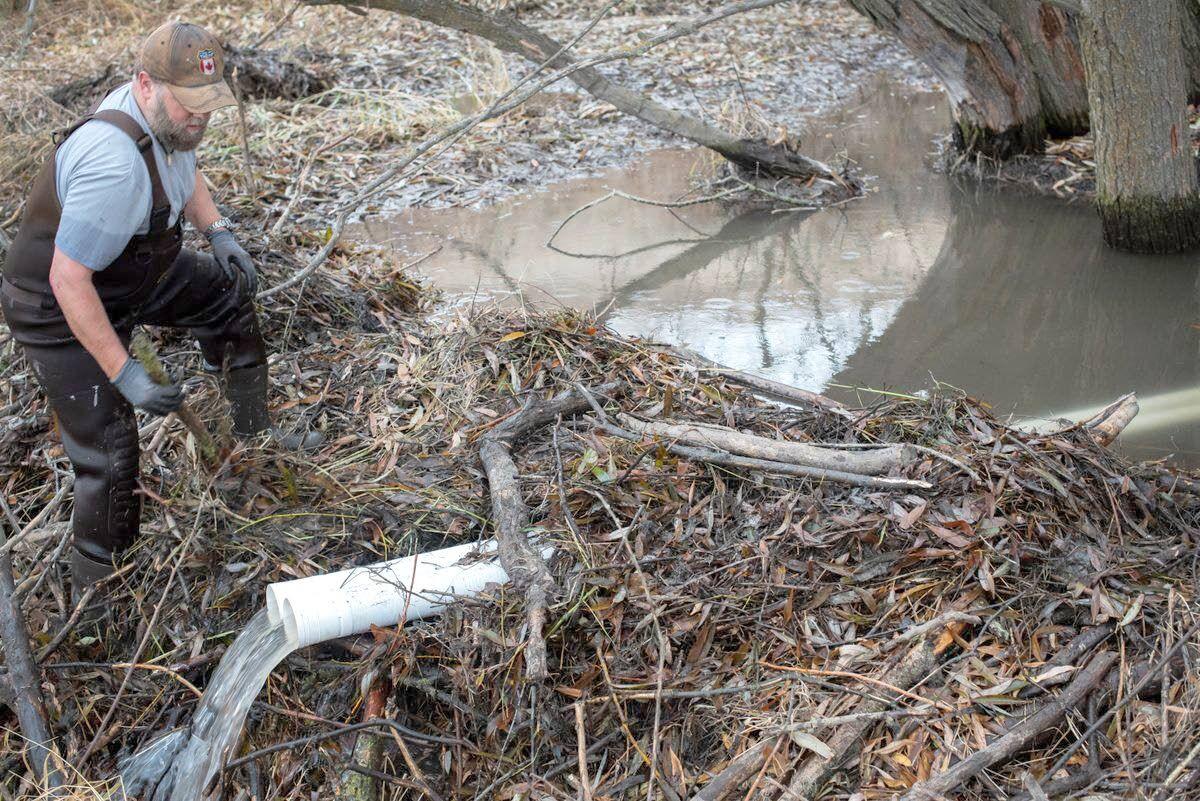 Chris Bachman, the wildlife director for the Lands Council, stands next to a pipe that is shunting water through a beaver dam on the Palouse on Nov. 5, 2020.

With landownder Linda Jovanovich looking in (background, far right), Chris Bachman breaks holes in a beaver dam to lower the level of the pond it created. He then installed a drain pipe to keep the pond from growing too large.

Bachman, the wildlife director for the Lands Council, and Ben Goldfarb, the author of “Eager: The Surprising, Secret Life of Beavers and Why They Matter,” build a flow-mitigation device

Chris Bachman, the wildlife director for the Lands Council, stands next to a pipe that is shunting water through a beaver dam on the Palouse on Nov. 5, 2020.

When Linda Jovanovich bought a 7-acre slice of land on the Palouse 25 years ago, it was nearly treeless, other than the obligatory row of pines and a few mountain ash planted to block the wind.

A straight and deep no-name stream cut through the loamy topsoil, its only decoration a long-abandoned car.

Wedged between a basalt hill and surrounded by farms, the land had been cleared long ago for agricultural interests.

Jovanovich is no farmer. She had run a landscaping business for years in Pullman and then worked as an elementary school librarian. In a college geology course, she’s become enamored with the natural world.

So, she started planting aspens, willows and other vegetation along the little no-name creek.

Two-and-a-half decades later, that work has paid off. Her property is a wildlife oasis among rolling fields of wheat. Piles of tree limbs dot her land, providing shelter for rodents and birds, coyotes and raccoons.

So, when beavers showed up eight years ago, she had mixed emotions.

On one hand, she was thrilled. She knew streams slowed by beaver dams and lodges create better habitat for animals and insects, collect silt and store and cool water, among other things.

On the other, their ponds flooded her little creek and threatened to drown her beloved trees.

The council trapped the beavers and relocated them to the Colville National Forest, which was the go-to coexistence tool at that time, said wildlife program manager Chris Bachman.

This time around, the Lands Council tried a different approach.

“The first question is always, can we keep the beaver here,” Bachman said. “Because usually when you find a place where you have beaver, you have beaver there because it’s good beaver habitat.”

So, on Nov. 5, Bachman drove to Jovanovich’s home and started breaking small holes in the beavers’ dam. These breaches, over the course of an hour, dropped the water level about a foot. Then he built a cage out of chicken wire with the help of Ben Goldfarb, a journalist, Lands Council board member and the author of “Eager: The Surprising, Secret Life of Beavers and Why They Matter.”

From the chicken wire cage, Bachman ran two 4-inch pipes, placed two cinder blocks at the bottom of the cage, dropped the entire thing into the pond and put the pipes through the beaver dam.

Voila, water rushed from the pipes.

In theory, the pipes will siphon enough water through the dam to keep the pond-level manageable. At the same time, the pond won’t drain completely, keeping the entrances to the beaver lodge submerged and the beavers defended from predators.

On Jovanovich’s 7 acres, the project seems to be working. Although the pond level dropped, it remained deep enough to protect the beavers from would-be predators, a fact nicely illustrated when Goldfarb, while trying to get a closer look at the beaver lodge, took a step too far, flooding his waders with cold water and sending him to shore.

Although the Lands Council has been working with beavers for a decade, using these types of tools, which are broadly known as flow-mitigation devices, is a new trick and reflects a shifting attitude toward coexistence in Washington.

Although Washington has a history of beaver tolerance, coexistence has relied mostly on keeping beavers and humans apart.

In 2006, a bill in the Legislature legalized the nonlethal relocation of “nuisance” beavers in Washington. It was a progressive bill, one that acknowledged the oft-ignored importance of Castor canadensis.

“Relocating beavers into their historic habitat provides a natural mechanism for improving the environmental conditions in Washington’s riparian ecosystems without having to resort to governmental regulation or expensive publicly funded engineering projects,” the 2006 bill states.

While that so-called “Beaver Bill” didn’t become law until 2012, it set the stage for Washington to become the beaver leader in the United States.

“Today more than half a dozen groups, agencies, and native tribes are transplanting beavers in the Evergreen State, the country’s most sizzling hotbed of castor relocation,” Goldfarb writes in his book “Eager.”

That’s partly because since 2019, the Washington Department of Fish and Wildlife has run a pilot beaver relocation project. Under the pilot, the agency issues beaver relocation permits. It urges landowners to “take measures to tolerate or mitigate beaver activity whenever possible” before they move the creatures.

Enter flow-mitigation devices, which take advantage of an interesting bit of beaver behavior discovered in the 1960s.

At that time Lars Wilsson, a Swedish biologist, raised several baby beavers (called kits) in isolation hoping to discover whether dam building was a learned or innate behavior. He released these lonely kits into some running water. They built near-perfect dams, despite having never met another beaver.

During the course of this experiment, Wilsson noticed something odd. When the kits were placed in stagnant or slow-moving water, they did nothing.

Nothing, that is, until he played the sound of moving water over a loudspeaker. Suddenly, the apathetic beavers started building a dam over the speaker. Wilsson even installed a translucent pipe showing water silently running through the dam. The beavers still opted to build over the speaker.

This behavioral insight is the basis behind flow mitigation devices and allows landowners like Jovanovich the chance to live alongside the rodents.

Beavers obsessively maintain their dams. But a pipe moving water through their dam, can go unnoticed, or if wide enough, unplugged.

There are sound ecological reasons, particularly in Washington’s farm country, to keep beavers on the land. Jovanovich’s little slice of creek cuts its way through the Palouse’s rich and deep topsoil, the deposited effluent of the unimaginable Missoula Floods. While some of the most fertile soil in the world, it’s prone to erosion. In an intact ecosystem, trees and other plants grow alongside these streams, helping anchor the soil.These deep and relatively straight channels mean that in the spring, snow melt rushes in one headlong dash, carrying soil and whatever else along for the ride. This mad runoff is visible as a deluge of dirt-filled water entering the Spokane River at the confluence with Hangman Creek.

Restoration efforts on the part of Trout Unlimited and the Coeur d’Alene Tribe near Hangman’s headwaters are focusing on restoring native vegetation to the banks and slowing the creek dow.

Sediment from their dams will, over time, fill in incised creeks, not to mention trap water. This in turn raises the water table, promotes growth along the stream banks and increases fish habitat, said Bachman.

And, if nothing else, it provides her yet another chance to commune with the natural world.

“I’ve always wanted to attract birds and wildlife,” she said, adding “We just should find a better way to live with them.”