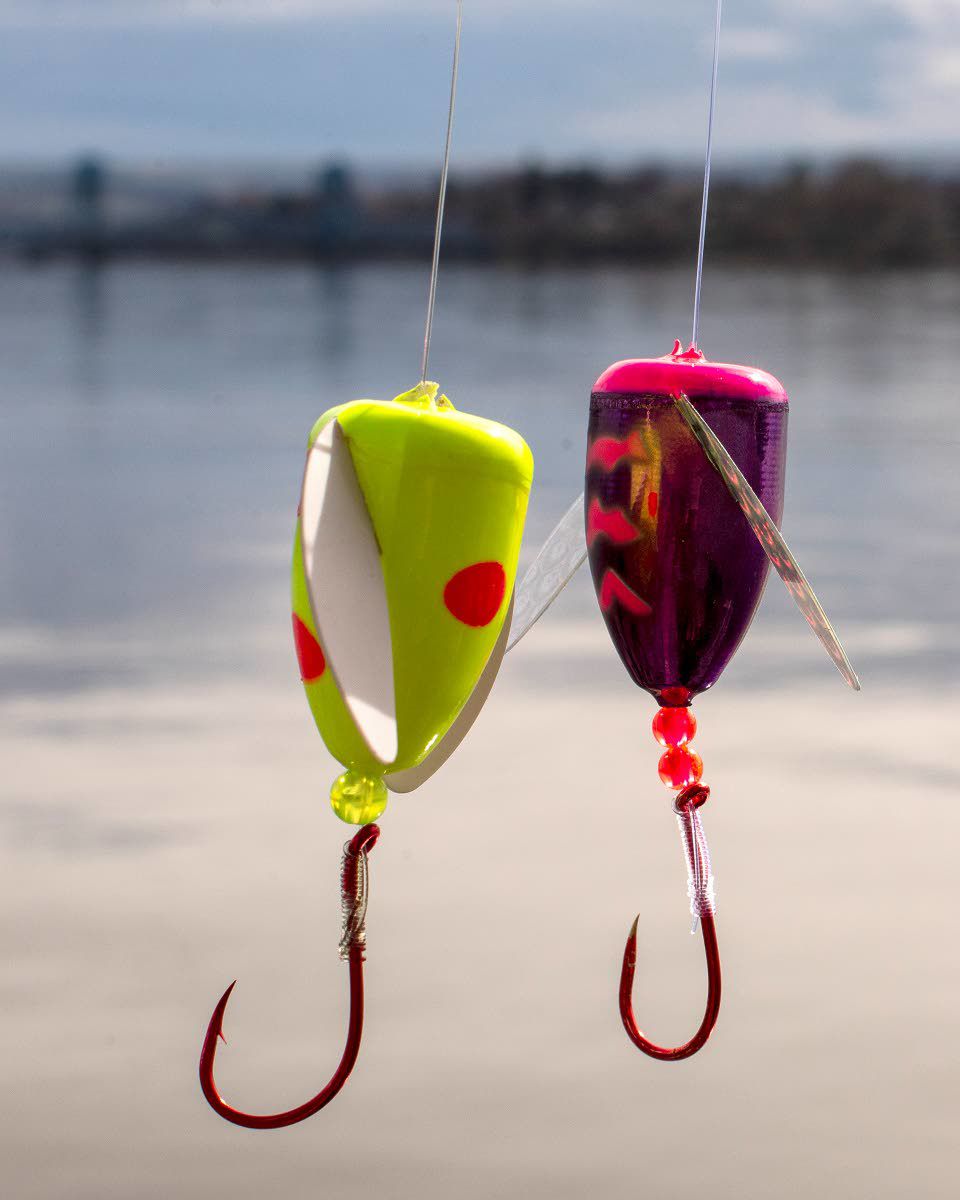 Anglers in Washington may soon be able to use barbed hooks, like the one on the left, while fishing for salmon, steelhead and other species, according to a move made by the Washington Fish and Wildlife Commission. 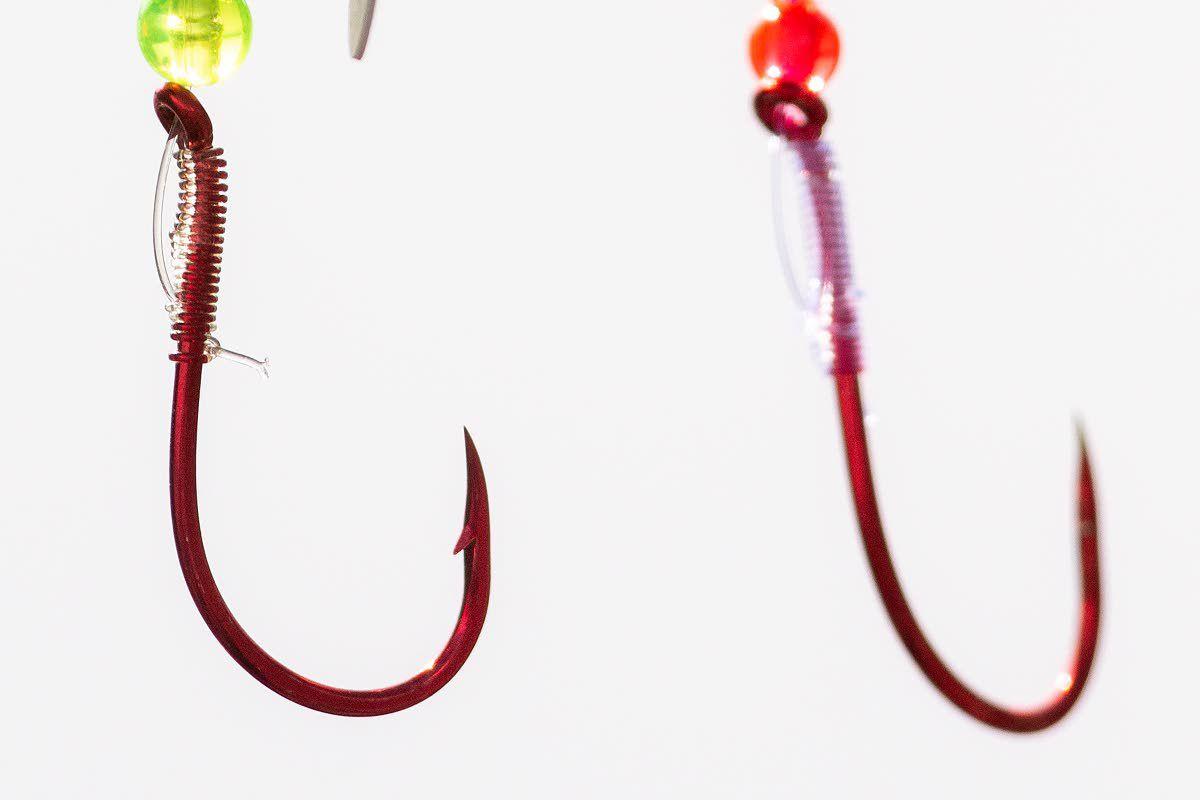 A barbed hook (on the left) versus a hook that has had its barb pinched down. Anglers fishing for salmon and steelhead have long been required to use barbless hooks, but that could be changing in some Washington rivers.

Anglers in Washington may soon be able to use barbed hooks, like the one on the left, while fishing for salmon, steelhead and other species, according to a move made by the Washington Fish and Wildlife Commission.

A barbed hook (on the left) versus a hook that has had its barb pinched down. Anglers fishing for salmon and steelhead have long been required to use barbless hooks, but that could be changing in some Washington rivers.

Anglers in Washington could soon have the choice to fish with barbed hooks while pursuing salmon, steelhead and other species in much of the Columbia River Basin.

In some areas, such as the Snake River and its tributaries, the use of barbless hooks has been required for decades as a means to reduce harm to wild fish protected under the Endangered Species Act. Wild fish must be released by anglers, and barbless hooks make it easier to do that. In other places, like the lower Columbia River below Bonneville Dam, the barbless rule has only been in place since 2013.

Last month, commissioners told fisheries managers at the Washington Department of Fish and Wildlife to implement the change as soon as possible or by June 1. It was born out of a five-year review of Columbia Basin salmon and steelhead policy by a joint committee of Washington and Oregon fish and wildlife commissioners.

Bill Tweit, a special assistant for the Washington Fish and Wildlife program at Olympia, said in making the change commissioners cited studies that show little or no survival benefit associated with the use of barbless hooks. They also pointed to feedback from lower Columbia River anglers who told them barbless hooks are unpopular.

The department is scrambling to implement the sweeping policy change, but first must comb through its various permits from the National Oceanic and Atmospheric Administration to ensure allowing anglers to use barbed hooks doesn’t violate agreements with the federal agency. States must obtain permits from NOAA Fisheries to hold fishing seasons on hatchery or nonlisted salmon and steelhead stocks in the same rivers where listed fish are present.

“The first thing we have to do is check and see if our ESA coverage is specific about the use of barbless hooks. Obviously if it is, ESA coverage trumps the (commission’s direction,)” Tweit said. “We are doing an inventory of all of our tributary fisheries to see if there are ESA compliance issues.”

Before making the change, Tweit said commissioners wanted to know what scientific studies had to say about the use of barbless hooks and whether they lead to increased survival of caught-and-released wild fish.

“We reported back that all the studies available at the time and some additional studies indicated hook placement was such a dominant variable that it accounted for most of the overall difference in mortality,” he said. “It was really hard to detect if barbless hooks provided any additional protection for fish that were going to be released.”

For example, he said when a fish is hooked in the gills or tongue, there is a high chance it will die, regardless of hook type.

Tweit said there is a line of thinking that using barbed hooks may mitigate incidental mortality of wild fish. According to that reasoning, Tweit said, the use of barbless hooks — particularly in chinook fisheries — leads to a lot of hooked fish getting off prior to being landed. That means that anglers often must fish longer to reach their bag limits. The longer they fish, the more wild salmon or steelhead they may encounter, and that could increase the number of protected fish hooked.

“There is some evidence and a lot of anecdotal information that because fish get off so much more with the use of barbless hooks that it does increase the amount of time anglers spend to get a bag limit,” he said. “So you increase the encounter rate (of wild fish), and that probably has some counterbalancing effect to whatever survival benefit you might get from the use of barbless hooks.”

Clarkston-based fishing outfitter Adam Hocking of Steel Dreams Guide Service agreed that the use of barbed hooks would increase landing rates for anglers fishing for chinook. Like a lot of outfitters, Hocking travels far and wide in Washington to participate in different fishing seasons.

He often targets chinook in the lower Columbia River and said going to barbless in 2013 made it more difficult for anglers to land spring chinook there.

On steelhead fisheries, Hocking said being able to use barbed hooks probably wouldn’t make much of a difference in angler landing rates, and he may not switch out his steelhead hooks because he has so many already tied up. He added that he hasn’t noticed it being any more difficult to release fish when using barbed hooks and noted that Alaska allows the use of large barbed hooks even on catch-and-release salmon seasons on the Kenai River.

“It’s not a big deal to pull those hooks out of fishes’ mouths quickly and easily, and we are ruining seven-ought hooks. Those fish release really well, and they swim off strong.”

He believes that barbless treble hooks are more damaging that barbed single hooks.

“I’ve seen more fish get messed up on treble hooks than anything else.”

Not all anglers are thrilled with the change. Josh Mills of Spokane, a board member of the Wild Steelhead Coalition, said anglers need to do everything they can to make sure they are not harming wild fish. He’s flabbergasted that the commission doesn’t agree.

Will Godfrey, a Lewiston fly fisherman who often fishes in Washington, said allowing barbed hooks will make it more difficult for those who use them to release wild fish.

“When push comes to shove, I’m a guy who would say the least amount of handling is the best,” Godfrey said.

Hocking, who was involved in last fall’s lengthy drama over Idaho’s steelhead season that was nearly scuttled because of the threat of a lawsuit from environmental groups, said the department must make sure the move to voluntary barbless rules doesn’t expose Washington to litigation.

“I like the idea of getting to fish barbs, but they have to make sure they are not going to open up a can of worms with the verbiage in the permits,” he said.

The conservation groups that threatened to sue Idaho over its expired steelhead permit said they are closely watching Washington’s effort to make barbless hooks voluntary.

“That is going backwards in our opinion, so we are going to fight that one pretty hard,” said David Moskowitz, executive director of the Conservation Angler based in Portland.

The guidance from the commission applies to all fisheries in the Columbia Basin. Tweit said the commissioners were discussing the use of barbed versus barbless hooks in the context of lower Columbia River fisheries, but the way the direction reads it would apply to all seasons, even catch-and-release trout streams. Even so, he said there will be some fisheries that still require barbless hooks. For example, he said sturgeon anglers are likely to be required to stay barbless.

“The science is a little different there,” he said.

The change has already been implemented in some places, like the Kalama River in southwestern Washington, but is proving tricker in other places, especially rivers with shared jurisdiction between Washington and other states.

Fish and wildlife agencies from states that share jurisdiction on boundary waters, such as Washington and Oregon on the Columbia between the Tri-Cities and its mouth and Washington and Idaho on the Snake River from Clarkston upstream to the Oregon/Washington state line, try to write their fishing regulations so they are concurrent between jurisdictions.

Tweit said the Oregon Fish and Wildlife Commission hasn’t moved to make barbless hooks voluntary, and if it doesn’t Washington could go back to barbless.

“I think the commission made the recommendation with the understanding Oregon would likely follow suit. If Oregon doesn’t follow suit, I would assume our commission will go back and revisit it,” he said. “That is just my assumption; they didn’t say that.”

Commissioner Jay Holzmiller is concerned the change may cause problems between Idaho and Washington on the Snake River. For that and other reasons, Holzmiller said commissioners may soon choose to revisit the change.

“We are going to be doing the barbless thing,” he said of the commission’s meeting today and Saturday in Olympia. “I’m going to say it’s a very, very high probability that we will be barbless in the Snake and its tributaries.”

However, Lance Hebdon, anadromous fish manager for the Idaho Department of Fish and Game at Boise, said while having concurrent regulations is ideal, Idaho doesn’t see a problem with the change.

“It’s an angler’s responsibility to know what the rules are under the license they are fishing with, so it’s not a problem with us,” Hebdon said.