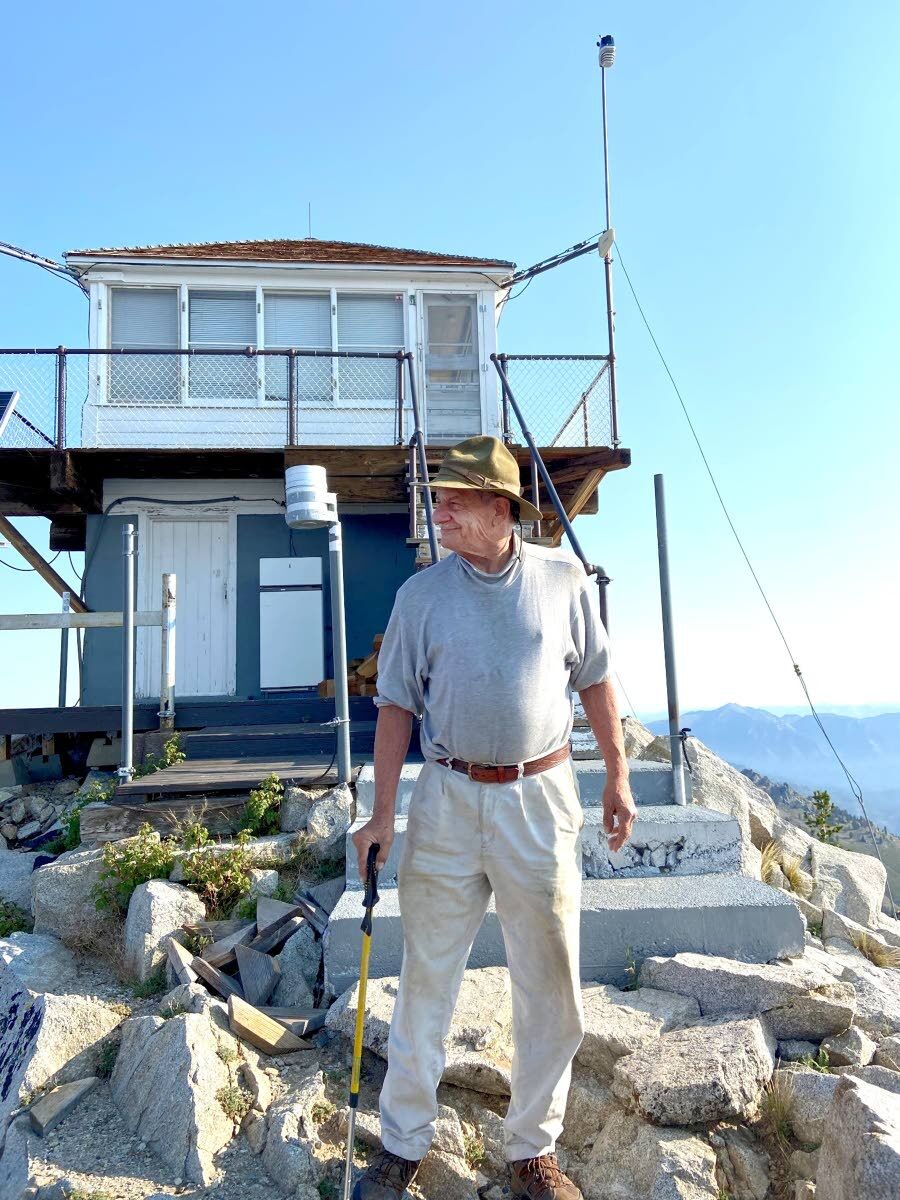 Jon Fredland pauses for a picture Aug. 4 in front of the fire lookout at the top of Trinity Mountain in Boise National Forest. The climb marked his 3,000th summit. 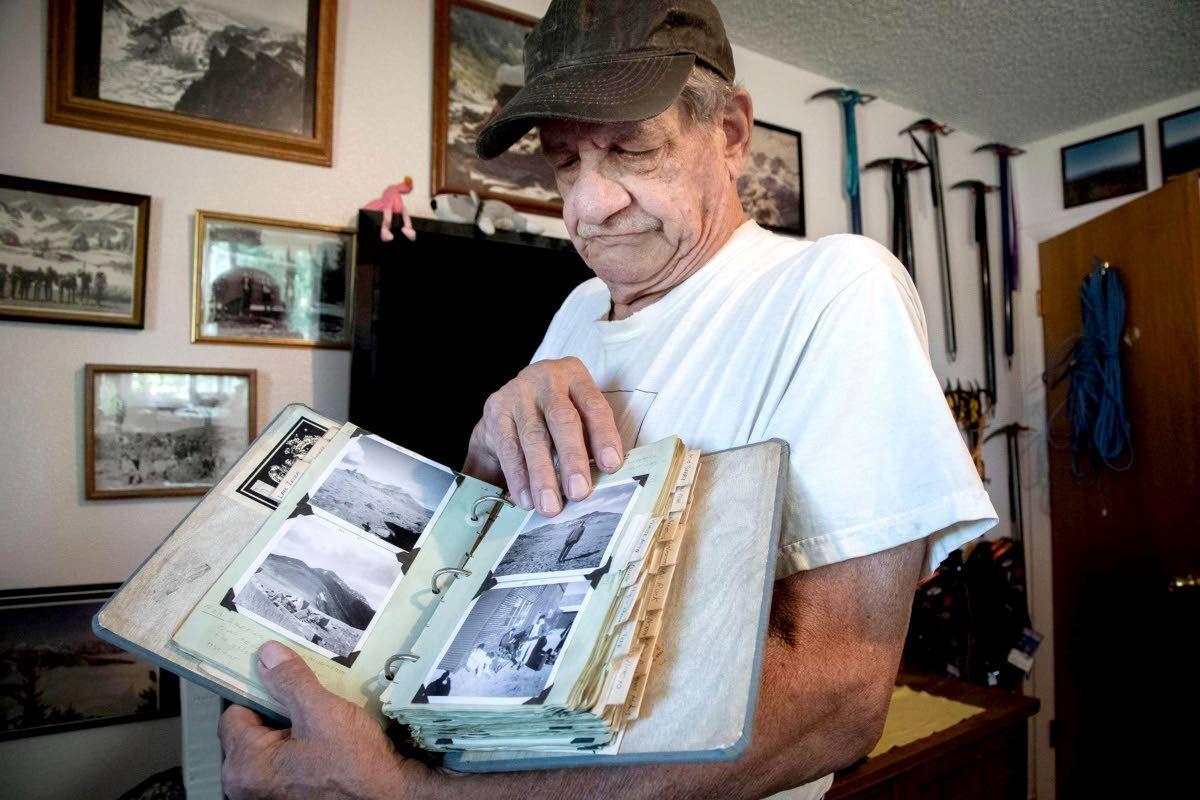 Jon Fredland, 70, thumbs through a photo album of pictures from his many hikes. “Like the bulldog that refuses to give up, I manage to get it done,” he said. 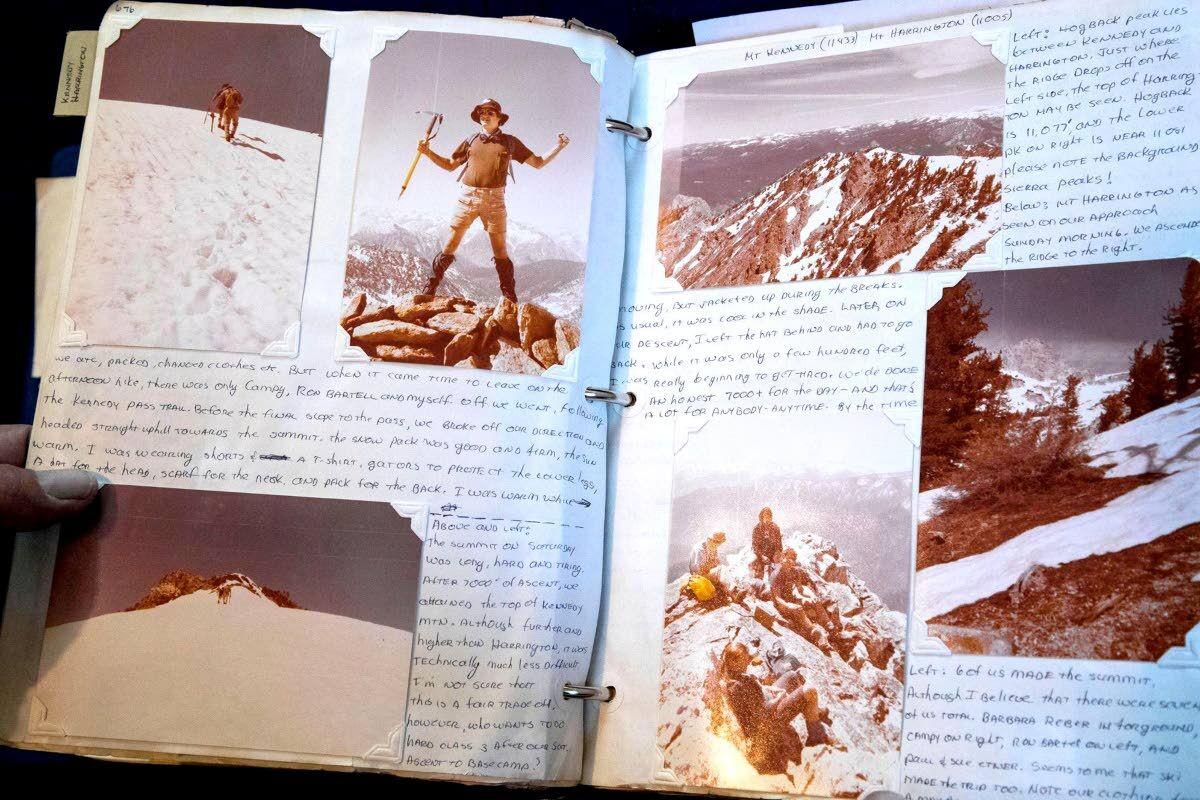 Notebook pages show John Fredland atop Mount Kennedy in the Sierra-Nevada range in 1974, and climbing Mount Harrington — one of his favorite peaks to climb. The photo colors are fading, but his journals keep a lifetime of adventures vivid in memory.

Jon Fredland pauses for a picture Aug. 4 in front of the fire lookout at the top of Trinity Mountain in Boise National Forest. The climb marked his 3,000th summit.

Jon Fredland, 70, thumbs through a photo album of pictures from his many hikes. “Like the bulldog that refuses to give up, I manage to get it done,” he said.

Notebook pages show John Fredland atop Mount Kennedy in the Sierra-Nevada range in 1974, and climbing Mount Harrington — one of his favorite peaks to climb. The photo colors are fading, but his journals keep a lifetime of adventures vivid in memory.

Just a few days after his 70th birthday, Jon Fredland hit another milestone.

The Nampa man ascended his 3,000th mountain peak, an achievement that speaks to countless days spent in the outdoors.

Fredland and a group of friends and loved ones climbed Trinity Mountain last month, a 9,451-foot mountain in the Boise National Forest. Fredland said he was looking for peaks high enough to escape the wildfire smoke that has plagued the Treasure Valley for much of the summer. But other than that, he said in a phone interview, he didn’t put much other thought into selecting the momentous mountain.

“I do so many peaks, it just came up on me so fast,” Fredland said. “Suddenly, the next trip it’s going to be there.”

Fredland’s love for the outdoors started early. He grew up in Southern California, where he was a Boy Scout and also got involved with the Sierra Club. He could be in the Santa Monica Mountains in just a few minutes or swimming in the Pacific Ocean in a similarly short time.

“I had to decide if I was an ocean guy or a mountain guy — and the mountains won out,” Fredland said. “Getting up to the mountains was something special.”

He continued his mountain explorations in Utah while attending college at Weber State. There, he instilled his love of hiking and mountaineering in his fellow students.

“The first thing I noticed about him when I met him in college (was that) he knew exactly where the trail was, he knew how steep the terrain was,” said Jeff Gray, who met Fredland in college and ascended Trinity Mountain with him Aug. 4.

With Fredland’s know-how, the friends went on frequent expeditions in the Wasatch Range.

“We were in the mountains seven days a week, either in canyons or on top of peaks,” Gray said. “When it snowed, we went out to desert mountains.”

After college, Fredland worked as a manager for Kmart and moved all around the West, spending time in Bend, Ore.; Casper, Wyo., and Tucson, Ariz., among other places.

In each place, he made it a point to explore the mountains nearby. A self-described “peakbagger” (Fredland’s license plate even reads PKBAGR), he methodically recorded each ascent in a series of notebooks that now serve as a scrapbook of his accomplishments.

Their pages contain photographs, reflections and descriptions of peaks like Picacho del Diablo, the highest point in Baja California; Oregon’s Castle Rock (“It’s an island in the sky”) and the Sierra Nevada Range, which is Fredland’s favorite.

Of course, Fredland’s prolific ascents extend to Idaho, where he has lived since 1988. It’s how he met another mountaineer who accompanied him on his birthday ascent of Trinity Mountain: Tom Lopez, author of “Idaho: A Climbing Guide” and founder of the website by the same name.

“I was climbing some peaks in the Trinity Mountains, and the first two I did, I found cookie-can registers,” Lopez recalled in a phone interview. “(Jon has) left registers all over the place, always in cookie cans. I saw the name, so when I got back home, I looked on Facebook and found him.”

The two have been climbing together since, with Fredland leaving cookie tin registers — logbooks for climbers to sign when they reach a peak — along the way. Gray jokingly calls Fredland “Jonny Register,” a play on Johnny Appleseed.

For Fredland, the registers were a way of making his mark.

“Around here, if you find some of those registers, chances are I’m the guy that put it there,” he said.

He was inspired by famed climber Norman Clyde, who set records and made first ascents around the Sierra Nevada and other mountain ranges in the mid-1900s.

“You climb a hard mountain that takes four days to get to ... and at the top here’s a little pile of rocks and a little aluminum film can (with a register that says) Norman Clyde,” Fredland said. “When you see that you just go, ‘Yeah buddy, sign me up for that.’ So maybe someone will find mine in 2120 and go, ‘Who is that guy?’ ”

His friends reckon Fredland will be remembered for much more than his summit registers.

“I doubt very many people get to 3,000 ascents. It puts him in a pretty small group of people,” Lopez said.

“I just felt good for Jon (climbing Trinity Mountain),” he said. “I knew Jon had put his heart and soul into climbing mountaintops. That’s quite an accomplishment — 3,000 peaks in one lifetime.”

Fredland said the support from his friends made the Trinity Mountain peak special, but a month later he has already put the milestone behind him. Since his 3,000th peak, he has ascended more than a dozen more mountains.

“It’s really just another peak along the way,” he said.