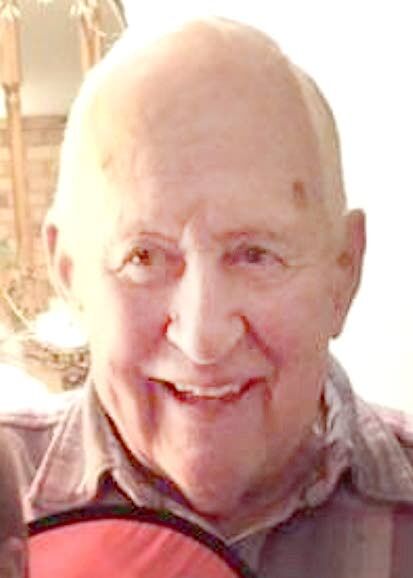 James Joseph Gehring, a lifelong Keuterville and Cottonwood resident, died of congestive heart failure on the morning of Nov. 11, 2021, (Veteran’s Day) at the Royal Plaza long-term care with his son Tim by his side. He was 93 years old.

Jim was born to Ted and Inez (Luchtefeld) Gehring on Dec. 27, 1927. He joined big sister Ethel, and was later followed by Bob, Dorothy, Mary, Dave, Vic and Carol. Little Mary only lived to be about 6 months old, a victim of whooping cough. Jim attended the Point School, and the Pine View Country School and later went on to graduate from St. Gertrude’s Academy. Throughout Jim’s youth, he was a member of Holy Cross Catholic Church in Keuterville and later St. Mary’s Church in Cottonwood.

Jim served in the U.S. Navy from March or April of 1946 to January of 1948. When he returned from the Navy, he began working for his dad and in 1950, Jim, his brother Bob and cousin Ken Gehring purchased the Fountain Place. At this time, he began to date Bette Bales and on Nov. 29, 1951, they were married at St. Mary’s Church in Cottonwood. They made their home in Cottonwood and raised four children, Kathy, Tim, Beth and Ted. Bette died Feb. 4, 2000.

He loved his ranch life and was a partner with his brother Bob. Later his son Tim and Bob’s son Tom joined the partnership. He retired from the ranch in the early 1990s, although his heart remained with the ranch and kept in close contact, being interested in daily activities. He had a deep love of the Salmon River Country and was a proud landowner and rancher of that area. He was very proud that in the early 1970s he, his brother Bob and Father Ted hosted the Grassman’s tour. He also served as president for the Idaho Cattleman’s Association in that same era.

He had an amazing memory right up to the time of his death. His talents included playing the harmonica and accordion (self-taught) for his children and then his grandchildren and great-grandchildren. He was an avid reader of local history and was a true cowboy right down to his trademark cowboy hats and boots. He had a quick, dry and witty sense of humor, and he didn’t know a stranger. In his later years, he enjoyed his morning coffee with his friends.

Rosary will be at 10 a.m. Nov. 22 at St. Mary’s Catholic Church. Mass will follow at 10:30 a.m. Burial will be held at Cottonwood Catholic Cemetery. A dinner at the Cottonwood Community Hall will follow. Blackmer Funeral Home is in charge of arrangements. Send condolences to the family to blackmerfuneralhome.com.