More than 60 area residents interested in beekeeping attended a gathering in Clarkston Saturday for the first meeting of the Valley Beekeepers Association. 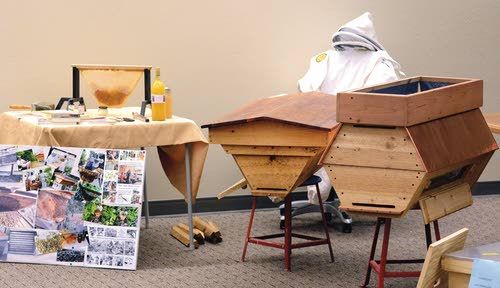 Various hives and beekeeping equipment were on display at the Valley Bee Keepers Association’s first meeting Saturday in Clarkston. 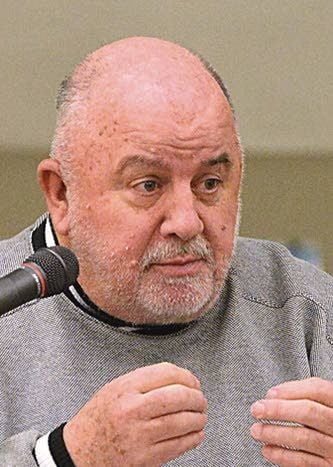 John Freeman is known in some circles as “ the bee whisperer.” 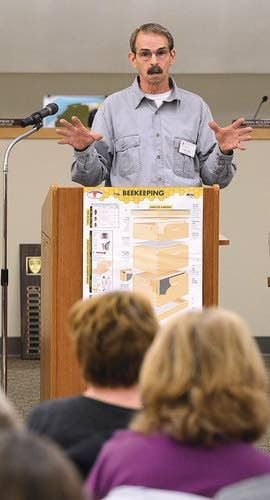 More than 60 area residents interested in beekeeping attended a gathering in Clarkston Saturday for the first meeting of the Valley Beekeepers Association.

Various hives and beekeeping equipment were on display at the Valley Bee Keepers Association’s first meeting Saturday in Clarkston.

John Freeman is known in some circles as “ the bee whisperer.”

What can you say about bees?

A lot, it turns out.

"These guys can talk about bees and beekeeping all day long," said master gardener Janet Marugg, at the opening of a Saturday presentation at the Clarkston City Council chambers that kicked off the first official gathering of the Valley Beekeepers Association.

The topic of the 10 a.m. meeting was colored yellow and black. The discussion laudatory.

"They are a mystical creature," beekeeper Larry Nelson told the more than 60 people who packed into the council chambers.

Marugg, WSU Asotin County master gardener, the presentation's mediator and official timekeeper, said her office received so many calls over the past several months from people interested in keeping bees it was hard to keep up.

"It quickly became apparent that the valley needs a beekeeper's association," she said.

The association plans a beekeeping class in Clarkston beginning in February for anyone interested in building hives and rearing tens of thousands of honeybees. That is how many bees work in a single hive in the summer months, said newly appointed Valley Beekeeper Association president John Freeman, who Marugg referred to as "the bee whisperer."

Freeman led the audience through a seasonal look at bee activity in a typical hive, starting with the frenzied summer months, when drones travel as far as three miles to gather pollen and nectar. At night, the worker bees store the pollen and nectar, and the cycle continues until a drone's 45-day life span caps and new bees emerge from larva and eggs.

"They work themselves to death," Freeman said.

Each worker makes about one-twelfth of a teaspoon of honey in its lifetime, Freeman said.

"That gives you an idea of how many teaspoons you have in a jar of honey," he said.

Forester Bob Hassoldt drove from Kendrick to attend the morning presentation and test the feasibility of raising bees to pollinate a nearby orchard and his own berry farm. Collecting honey would be a sweet by-product from the bees if he decided to raise them, Hassoldt said.

Bees don't need a lot of colorful flowers to make honey, he learned. They see only white, blue, yellow and black, and they prefer weeds such as loose strife, dogbane, burdock and thistle.

Roses aren't on the hit list of nectar or pollen gatherers. Neither are many other beautiful, ornamental variety blooms, said master garden and educator Deloris Jungurt-Davisson. Bees just don't like them.

Weeds and sage among them, she said. And bees are a necessary pollinator of squash, strawberries and tomatoes.

"If you don't have bees, you don't get very good tomatoes," she said.

As much as the gathering crowd - standing room only at times - loved honeybees, the famous insects known to civilization since people wrote things down have their share of enemies. Mites, fungus and bacteria, along with skunks, bears and raccoons, can lay low a once-active hive, said Pomeroy bee afficionado and keeper Larry Carey.

And wasps, he said, also stalk and kill the fecund honeybee.

Then there are the efforts of keepers themselves who may inadvertently, mostly through inexperience, spell a bee's demise.

Neighbors may not like them either, but that is only because they don't know much about them.

"Backyard beehives are a wonderful way to get to know your neighbors," Carey said.

Saturday's presentation included three varieties of hives, an assortment of tools, books and a bottle of mead - an alcoholic beverage made with fermented honey.