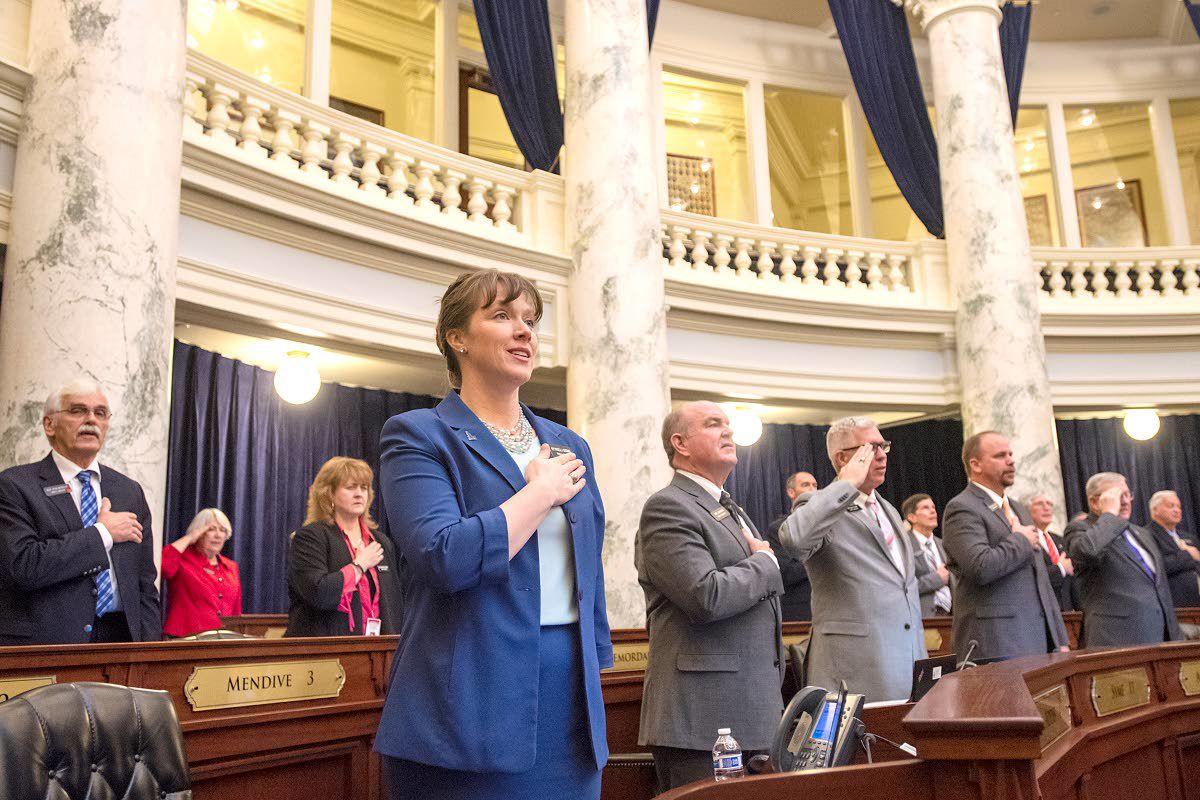 In this Feb. 13, 2019, file photo, Rep. Priscilla Giddings, R-White Bird, places her hand over heart as the Pledge of Allegiance is recited prior to the start of a session in the Idaho House of Representatives in Boise. 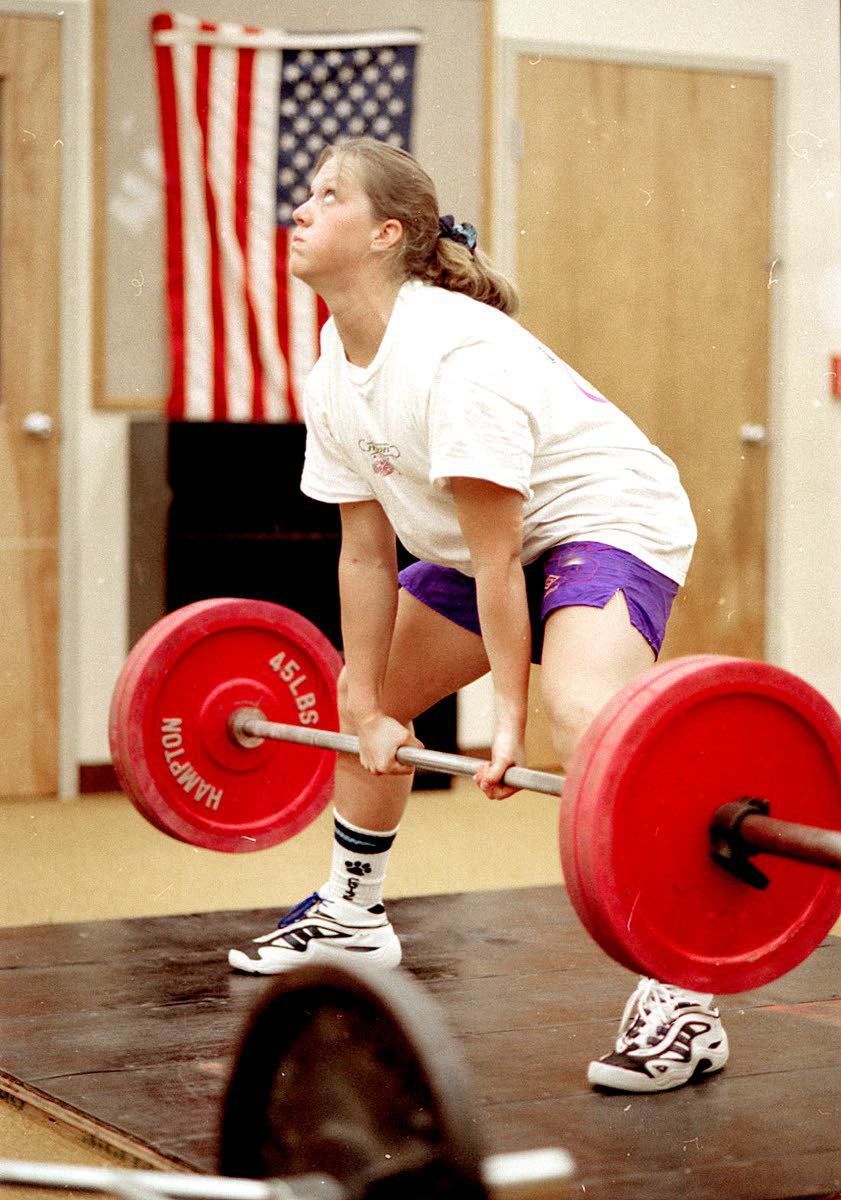 Priscilla Giddings, shown in this 1999 file photo practicing her powerlifting, set records in the sport as a 16-year-old. 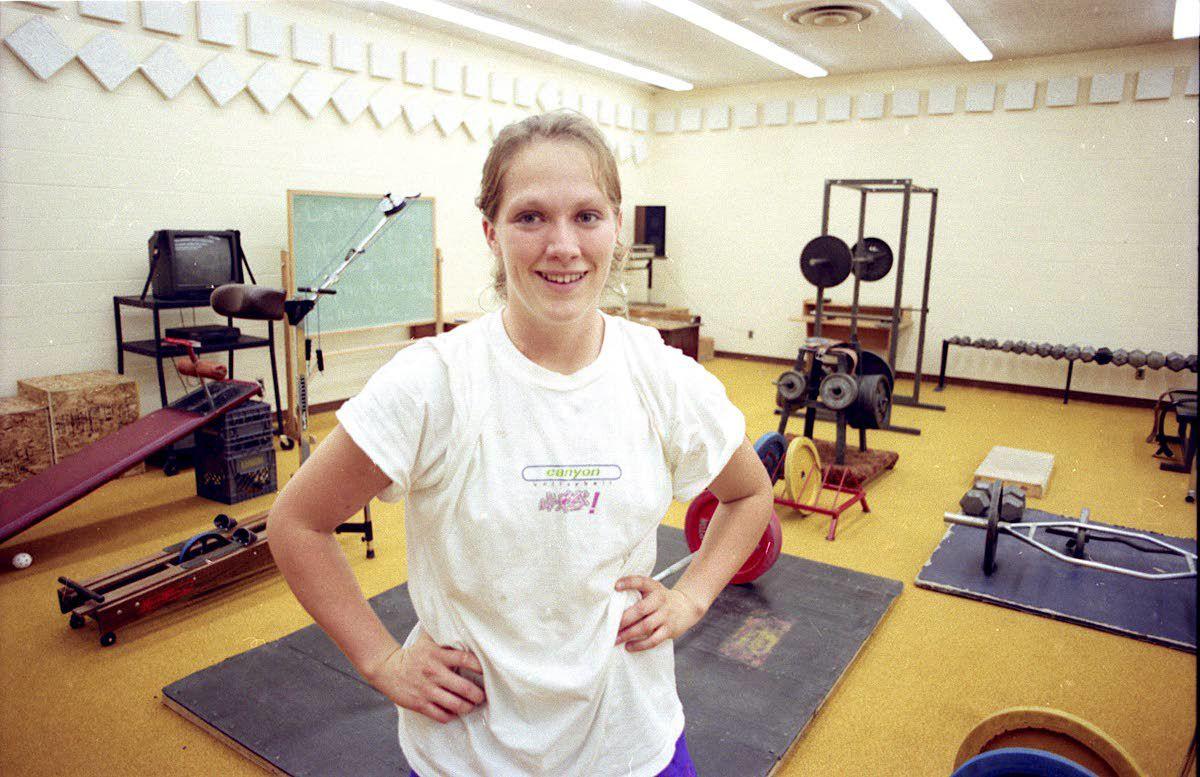 Priscilla Giddings, 16, takes a break from powerlifting in this 1999 file photo. 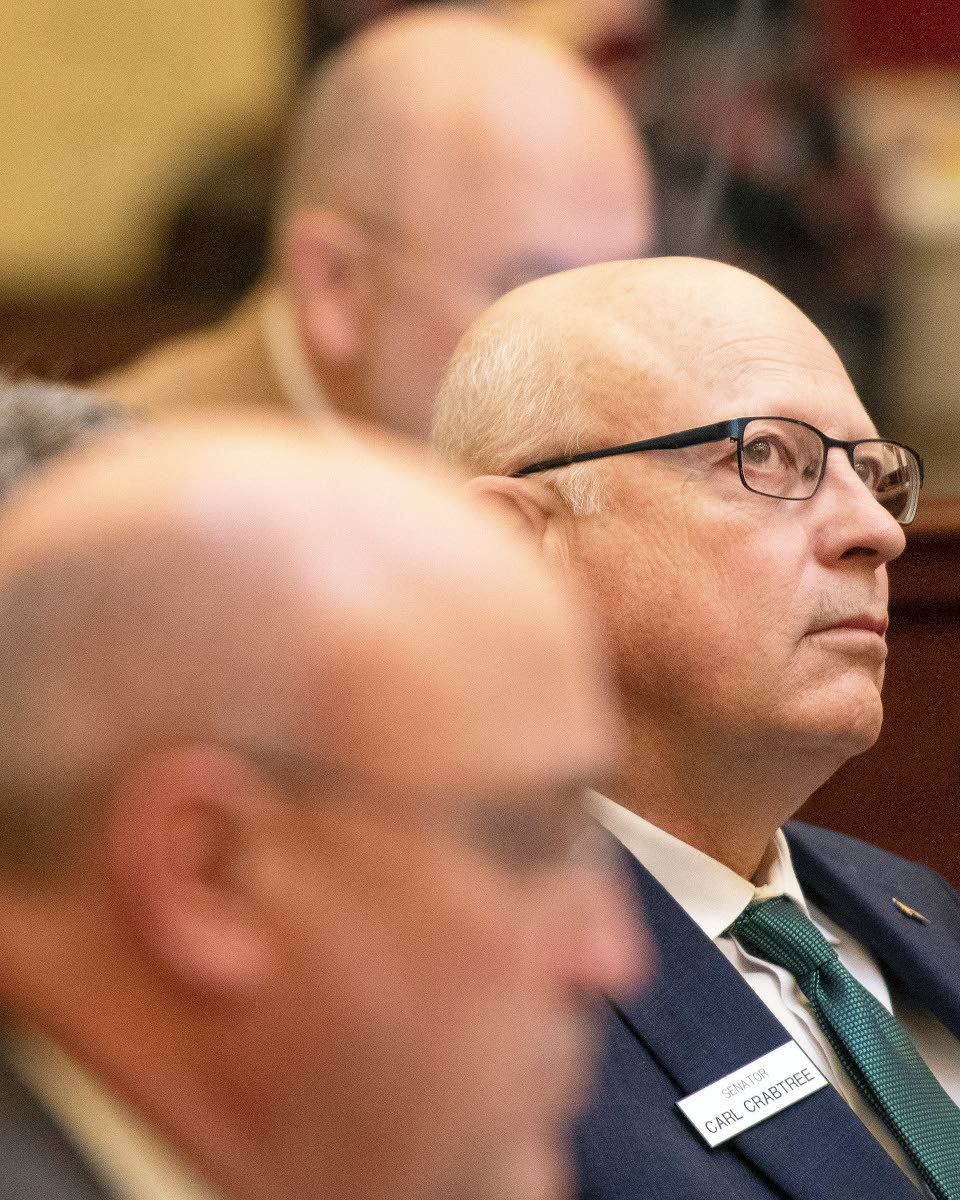 Carl Crabtree, shown in the Idaho Senate in this Feb. 27, 2019, file photo, grew up on Battle Ridge, near Kooskia, where there was never a question that his mother, Loretta Crabtree, was in charge. 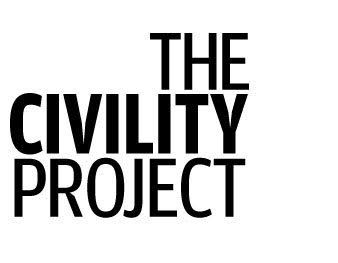 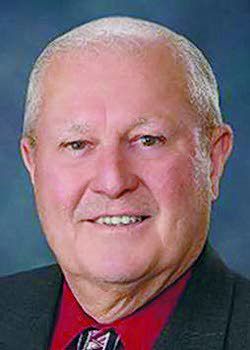 In this Feb. 13, 2019, file photo, Rep. Priscilla Giddings, R-White Bird, places her hand over heart as the Pledge of Allegiance is recited prior to the start of a session in the Idaho House of Representatives in Boise.

Priscilla Giddings, shown in this 1999 file photo practicing her powerlifting, set records in the sport as a 16-year-old.

Priscilla Giddings, 16, takes a break from powerlifting in this 1999 file photo.

Carl Crabtree, shown in the Idaho Senate in this Feb. 27, 2019, file photo, grew up on Battle Ridge, near Kooskia, where there was never a question that his mother, Loretta Crabtree, was in charge.

BOISE — Priscilla Giddings saw her first bomb scare when she was 10 years old.

Now a two-term state representative from White Bird, Giddings was living in Israel at the time. She spent a year there after her mother got a job as a guidance counselor at the American International School near Tel Aviv.

“I was at an age when I was starting to see beyond myself,” she said. “It was a perfect time to experience a completely different culture. I was going to school with kids from all over the world.”

One of the more educational incidents, however, occurred outside of school, when she and her mom were walking home from the grocery.

“There was a bomb scare at a bus stop,” Giddings said. “The police cordoned off the street and rolled out a bomb-detecting robot. I’d never seen anything like it. Growing up in America, that wasn’t something I had to worry about.”

Although people were pretty nonchalant about it — the “bomb” turned out to be a frozen chicken — the contrast between that experience and the freedom she’d grown up with in America made an indelible impression on her.

“The fear-freedom comparison was a big wake-up call,” Giddings said. “That was when I decided I wanted to go to the Air Force Academy.”

As one of the nation’s five service academies, admission to the U.S. Air Force Academy is extremely competitive and requires a congressional nomination.

Carl Crabtree isn’t sure when he first realized that women don’t always run the world, but the discovery came as a shock.

Growing up on Battle Ridge, near Kooskia, he and his brothers never had any doubts about who was in charge.

“My mother had managerial skills like no other,” said Crabtree, who is in his second term as state senator for the 7th Legislative District. “She could have been a corporate executive. When I went to college and heard about women’s lib, I didn’t understand what they were talking about. My whole life experience told me women were in charge of everything.”

Loretta Crabtree, now 94, still lives on Battle Ridge — and still exerts an oversized influence on her son’s worldview. Virtually every character trait he values in himself and others stems from her.

One trait he has that perhaps didn’t come from her? A sense of humor.

“She wasn’t necessarily the most likable person,” Crabtree said with a laugh. “There were two ways of looking at the world: her way and the wrong way.”

After graduating from Clarkston High School, Loretta Crabtree taught in a one-room schoolhouse in Ravendale, Calif., in the high desert near the Oregon border. That’s where she met her husband.

“Dad was an old-time cowboy,” Crabtree said. “He was only happy if he was on a horse, riding into the sunset.”

They moved to Battle Ridge after his mom got a job teaching in Kooskia. She was apparently a great favorite of her students, but the supportive, encouraging demeanor she had in class wasn’t always evident at home.

Crabtree remembers one occasion where he slipped up and got a ‘B’ on his report card. His mom waited until that evening, when family was all around the kitchen table, to ask, “Now Carl, what can we as a family do to help you with this class you’re having trouble in?”

“She had this passive-aggressive approach,” Crabtree said. “It was like thumb screws.”

The respect for women he learned at home stayed with him, though. Years later, after Crabtree became president of the Idaho Cattle Association, he appointed Carolyn Troy — now a state representative from Genesee — as the first chairwoman of a cattle association committee.

Rising nearly 200 feet from the first floor to the capitol dome, the central rotunda is one of the most visually appealing architectural features in the Idaho Statehouse.

A massive Idaho flag currently hangs in the space. During the holiday season, it’s also the location of the capitol Christmas tree.

“My dad always used to provide the tree,” said Riggins Rep. Paul Shepherd. “I’d help him wrestle a 30-foot tree into the building. I never imagined I’d end up serving here. I think of that every time I look down (from the third-floor House railing).”

Shepherd grew up in Boise, working in the family sawmill business and attending Boise High. That’s where he met his wife, Dawn. They were married between his junior and senior year.

After high school, Shepherd drove trucks for about five years. He and Dawn also raised livestock, buying calves, grazing them and then selling them. By 1963, when he was 25, they’d saved up enough to buy a small sawmill.

“I always wanted to be in business,” he said. “I’d grown up in a family mill, and it was such a good life I wanted the same for my kids.”

When he and Dawn were still dating, they spent a lot of time talking about the future, about the kind of business they wanted, how many kids, what kind of home.

“We were making plans — and it all turned out,” Shepherd said. “We’ve been able to live our dreams.”

One of his main concerns as a legislator is ensuring that other young families have that same opportunity. He worries about the shift from a mom-and-pop economy to a “collectivist” system dominated by large corporations.

“The corporations are cutting out opportunities for thousands or millions of people,” Shepherd said. “They go to work for corporations and become part of that collectivist system, rather than being self-employed.”

To him, that’s the death of a dream.

This is the first in a series of stories this Idaho legislative session talking with elected officials about the formative experiences in their lives. The stories are based on the work of the National Institute of Civil Discourse, which maintains that it’s harder to demonize people when you know something about their journey in life.