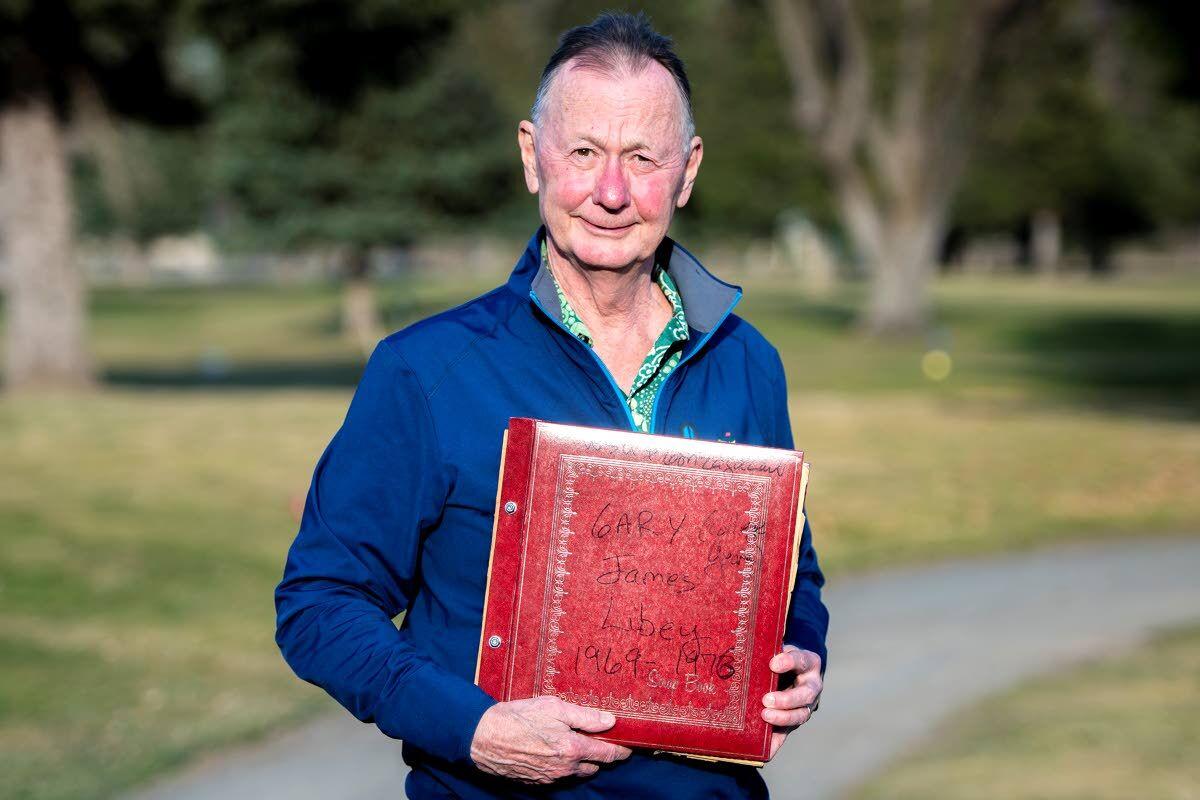 Judge Gary Libey, of Colfax, poses for a portrait outside of Colfax Golf Club with his scrapbook covering events from 1969-76 while he attended college. Libey was friends with five Washington State University students who died during a sailboat trip on April 14, 1971. 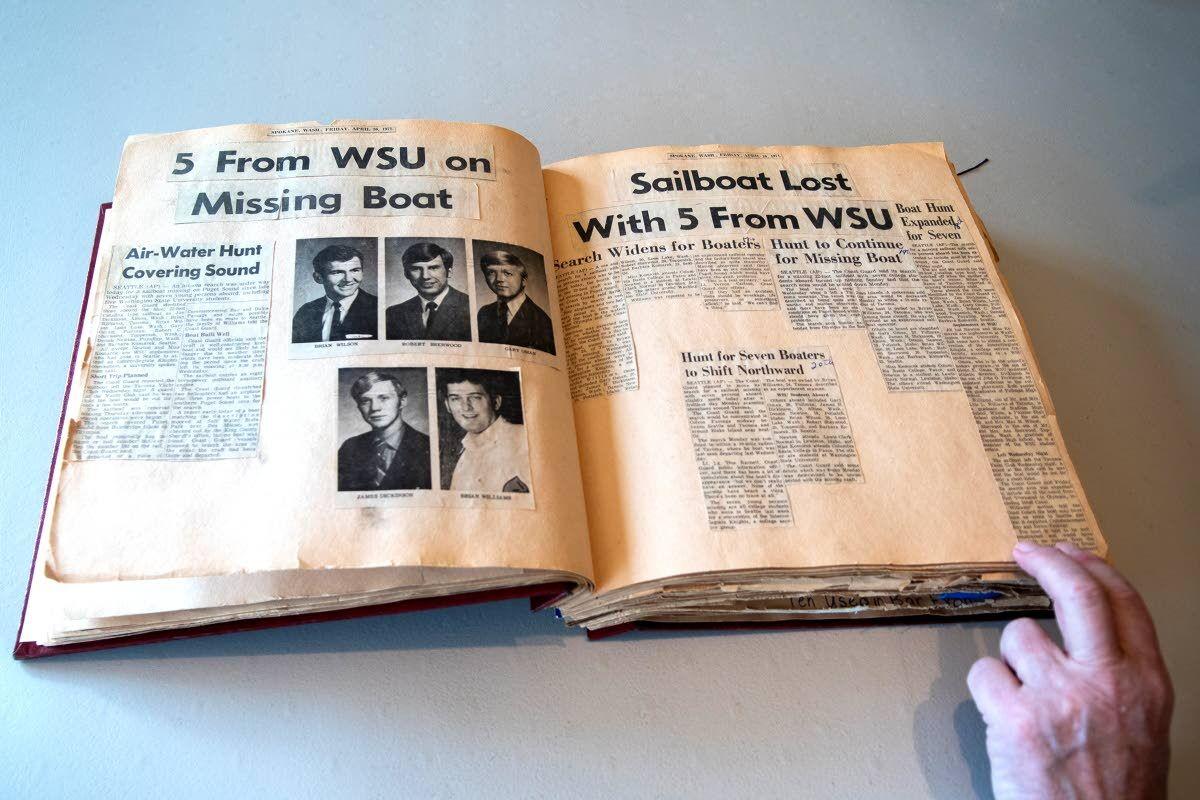 Judge Gary Libey flips through pages of his scrapbook as he shares memories about a tragic boating accident on Puget Sound that took the lives of seven college students, including five from Washington State University, 50 years ago.

Judge Gary Libey, of Colfax, poses for a portrait outside of Colfax Golf Club with his scrapbook covering events from 1969-76 while he attended college. Libey was friends with five Washington State University students who died during a sailboat trip on April 14, 1971.

Judge Gary Libey flips through pages of his scrapbook as he shares memories about a tragic boating accident on Puget Sound that took the lives of seven college students, including five from Washington State University, 50 years ago.

COLFAX — The young Washington State University students who died five decades ago had bright futures ahead when their sailboat mysteriously vanished in the murky waters of Puget Sound.

The wreckage and bodies were never recovered, but memories of the fateful evening cruise continue to surface.

Luckily, the future lawyers and longtime Colfax residents were not aboard the 22-foot Catalina-type boat when it disappeared after an evening launch from the Tacoma Yacht Club on April 14, 1971. Five of the seven young adults on deck were from WSU.

“Seven kids went out that night and never came back,” Libey said in a recent interview. “The boat has never been found, but we think it was hit by one of those huge freighters in the Tacoma Narrows and immediately sank. This is a very sad anniversary for everyone who remembers the tragedy.”

The list of those who perished includes Jim Dickinson, of Albion; Brian Williams, of Tacoma; Brian Wilson, of Loon Lake, Wash.; Gary Oman, of Pullman; Robert Sherwood, of Toppenish, Wash.; Dennis Newton, of Potlatch; and Barbara Komarek, of Seattle.

Newton attended Lewis-Clark State College and Komarek was a student at Columbia Basin College in Pasco. The rest of the crew were WSU sophomores with ties to the region. Oman and Dickinson graduated from Pullman High School, and Wilson grew up in Palouse.

The WSU group was in the Seattle area for a national Intercollegiate Knights convention, and Libey’s future wife, Melanie Heacock, had been invited to go out on the boat, which belonged to Williams.

Heacock, who had been crowned as the Intercollegiate Knights’ “duchess,” didn’t answer the knock at her door that night in Tacoma, opting to stay at the hotel.

Now a Liberty Lake resident, Heacock, 69, said she decided to skip the cruise because she was a “little spooked” to be on the water at night, and she had a big day ahead and needed to be ready for the convention by 8 a.m.

“It was a very eerie thing,” Heacock said in a phone interview. “Selfishly, I didn’t go because I’m not a night person. I was typing a speech for a guy who was running for office, and I had long hair and had to be up early to wash it the next day, and I didn’t want to get home late. If I had short hair, I might’ve gone.”

Frazier, now 70, and Libey, 69, were back in Pullman when they heard the devastating news.

“We were all in shock,” Libey said. “Life changed for a lot of people 50 years ago. The guys in that group were just outstanding, along with their parents. They had great lives ahead. If Melanie had been on that boat, my life would have been completely different. I would not have my two kids and five grandkids. I probably wouldn’t have ended up here, and I never would’ve met Trudy.”

Libey and his second wife, Trudy, recently celebrated their 30th anniversary. Recalling the loss of his friends and how the tragedy could have drastically altered his own path still evokes emotion.

“It was heartbreaking for many of us, and something you never forget,” Libey said.

Frazier, who is now retired from the Superior Court bench, said the sailing incident was “extremely shocking.”

“I knew about everyone on the boat,” Frazier said. “The fellow who owned the boat was in our fraternity. Nobody had any idea what had happened. There were rumors that they were dodging the draft in the Vietnam War and went to Canada, which was the last thing on earth any of them would do. Looking back, I’m glad I didn’t go to the conference because I’m sure I would’ve been out on that boat.”

The Coast Guard searched the water for many days, along with helicopters and airplanes. The extensive effort covered Puget Sound, from Bainbridge Island to Olympia, according to newspaper clippings in Libey’s scrapbook. Weather wise, the coast was clear for sailing on the night the boat slipped into oblivion.

“I can tell you those kids were not drinking,” Heacock said. “We were a service organization, not a drinking group, and we were underage. The captain, Brian Williams, had his license and was fully capable of taking that boat out. They were all really nice guys, and I’ve always wondered what really happened.”

As the days wore on, the search shifted northward, as far as the San Juan Islands. The shorelines around Tacoma had yielded no clues, nor did the Colvos Passage, midway between Seattle and where the sailboat was launched.

The people aboard the boat were legally declared dead seven years after it disappeared.

“I know Brian’s mother really worked hard trying to figure out what happened,” Heacock said. “She didn’t let it die. My heart ached for her. It’s not something you forget. I haven’t talked about it a lot, but from time to time, I have thought about it and wondered about my purpose in life. Why did it turn out that way? Why am I alive today and they aren’t?”