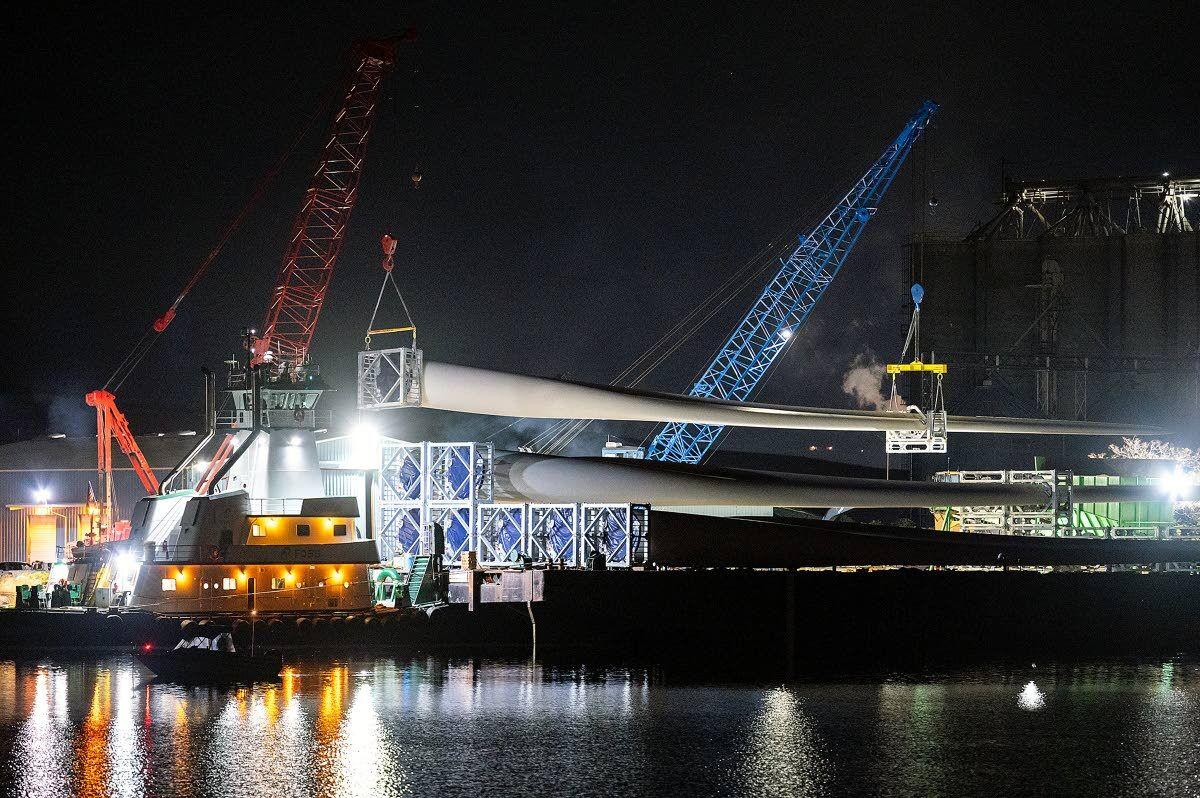 A fishing boat slowly moves down the Clearwater River late Monday night as two large cranes remove the first of eight wind turbine blades from a barge at the Port of Lewiston. The blades soon will be transported from Lewiston to Alberta, Canada. 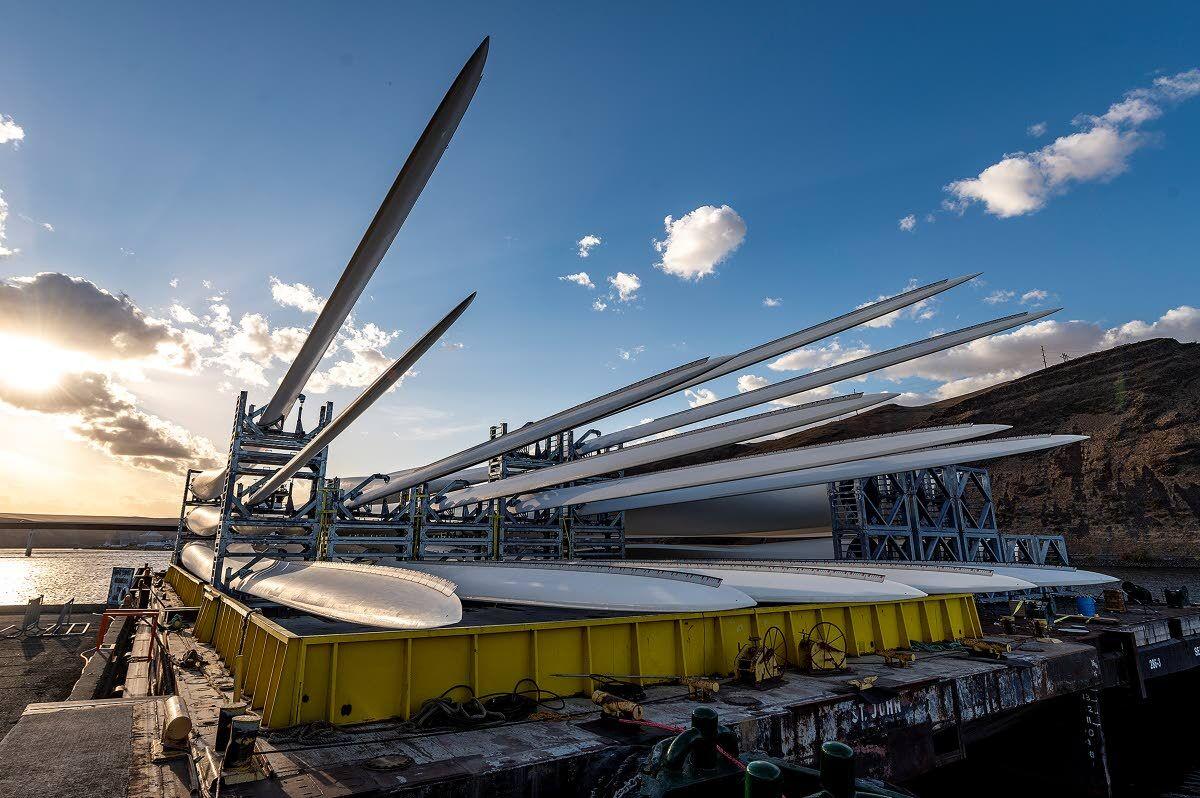 Giant blades for wind turbines sit idle at the Port of Clarkston on Monday evening as workers prepare them to be moved to the Port of Lewiston where the 300-foot-long blades will be removed from the barge.

A fishing boat slowly moves down the Clearwater River late Monday night as two large cranes remove the first of eight wind turbine blades from a barge at the Port of Lewiston. The blades soon will be transported from Lewiston to Alberta, Canada.

Giant blades for wind turbines sit idle at the Port of Clarkston on Monday evening as workers prepare them to be moved to the Port of Lewiston where the 300-foot-long blades will be removed from the barge.

Extra-long components for a wind farm being constructed in Canada will create evening traffic delays on north and north central Idaho roads in the coming months.

The first of 301 trucks carrying wind turbine blades or tower segments are scheduled to begin the land portion of their journey this week, said Megan Sausser, a spokeswoman with the Idaho Transportation Department in Coeur d’Alene.

A test run without any of the components is set for tonight. If that goes well, the first shipment will leave the Port of Lewiston at 7 p.m. Thursday, one of as many as seven trucks that will go each night Sunday through Thursday, Sausser said.

The components have been arriving at the Port of Lewiston since September after being barged up the Columbia and Snake rivers from the Port of Longview, in southwestern Washington.

“These loads will be traveling at night to limit the impacts to the traveling public,” Sausser said. “We do expect traffic to flow between each load.”

Each truck will spend a night on a route going from the Port of Lewiston, north on U.S. Highway 95 to Coeur d’Alene, then east on Interstate 90 to Mullan, Idaho, near the Montana border. Their ultimate destination is somewhere in Alberta, Canada.

Traffic will be stopped for 10 to 15 minutes at the base of the Lewiston Hill when the trucks leave Idaho State Highway 128 and turn onto U.S. Highway 12/95, Sausser said.

“We will require they take precautions to make sure the traveling public is safe,” she said.

The trucks hauling the turbine blades will be 270 feet long, and the vehicles hauling the tower components will be anywhere from 118 feet to 181 feet long. A standard semitruck and trailer is 75 feet long.

They will be as wide as 14 feet, compared with a standard highway lane width of 12 feet, but that dimension isn’t expected to create issues for motorists, Sausser said.

“The unusual quality to these shipments is how long they are, not how wide they are,” she said.

All of the shipments are expected to leave the Port of Lewiston by the end of December, depending on weather.

“The actual timing isn’t up to us and could change again,” she said.

The update from the Idaho Transportation Department about the wind farm equipment comes one month after the Port of Lewiston announced the cargo was being unloaded at its facilities in a deal anticipated to generate about $100,000 for the port.

Port and transportation department officials have said they don’t know where the parts were manufactured, the exact location of the wind farm or the name of the company constructing the wind farm.

In addition to the Port of Lewiston and ITD, the Port of Clarkston, has been involved in the project.

Two barges with turbine blades were moored at the Port of Clarkston’s 14th Street dock before heading to the Port of Lewiston.

The work demonstrates the importance of having a water route for large vessels between the Portland, Ore., area and Lewiston, according to a news release from the Port of Clarkston.

“The Columbia/Snake River navigation channel has helped move (this equipment) more efficiently and with greater safety than by other methods of transportation,” according to the news release.