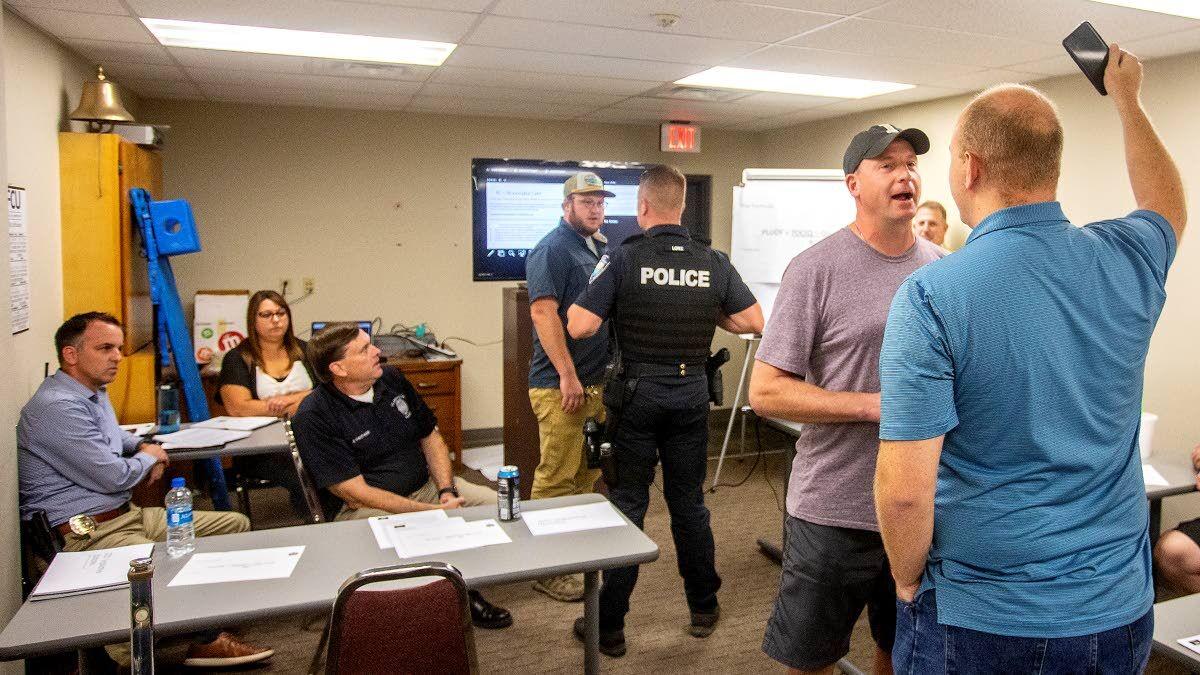 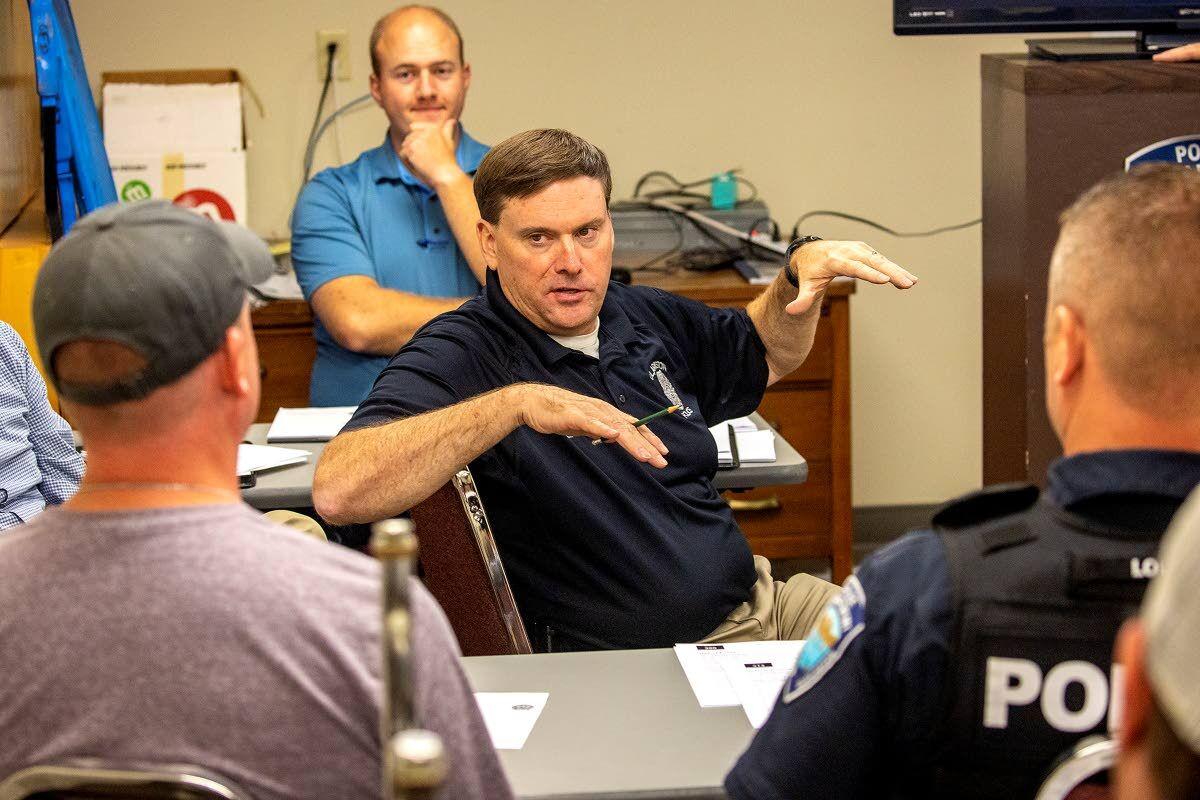 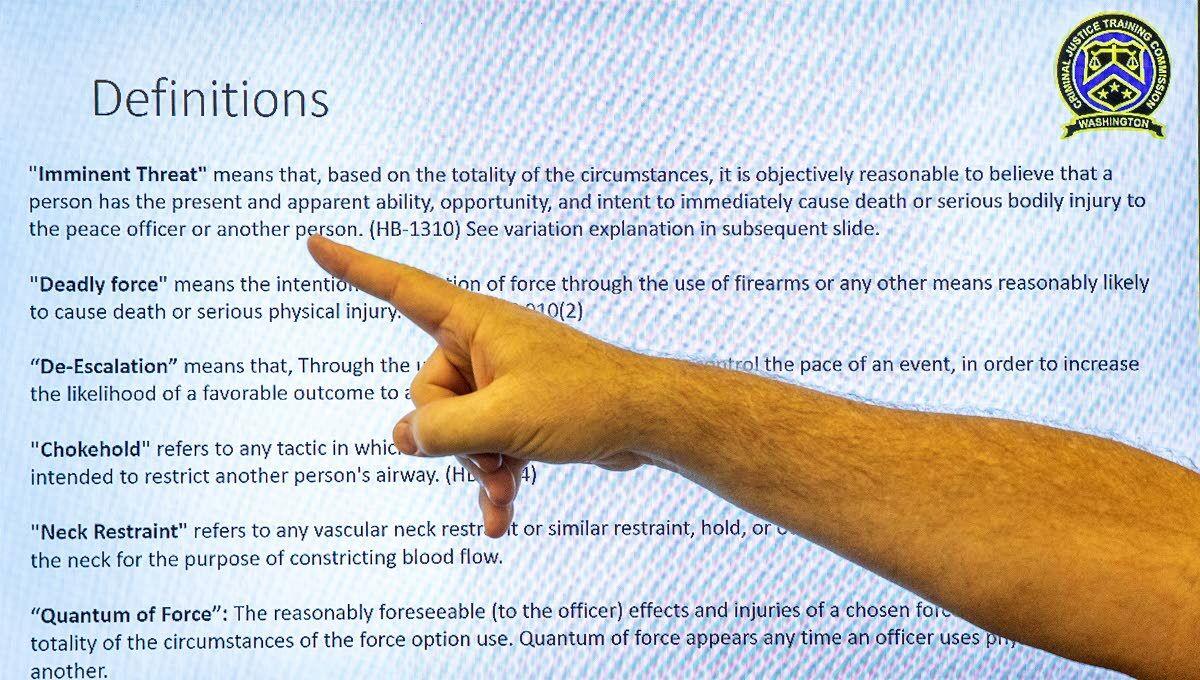 Clarkston City Attorney Todd Richardson points to definitions as he leads a training at the Clarkston Police Department. 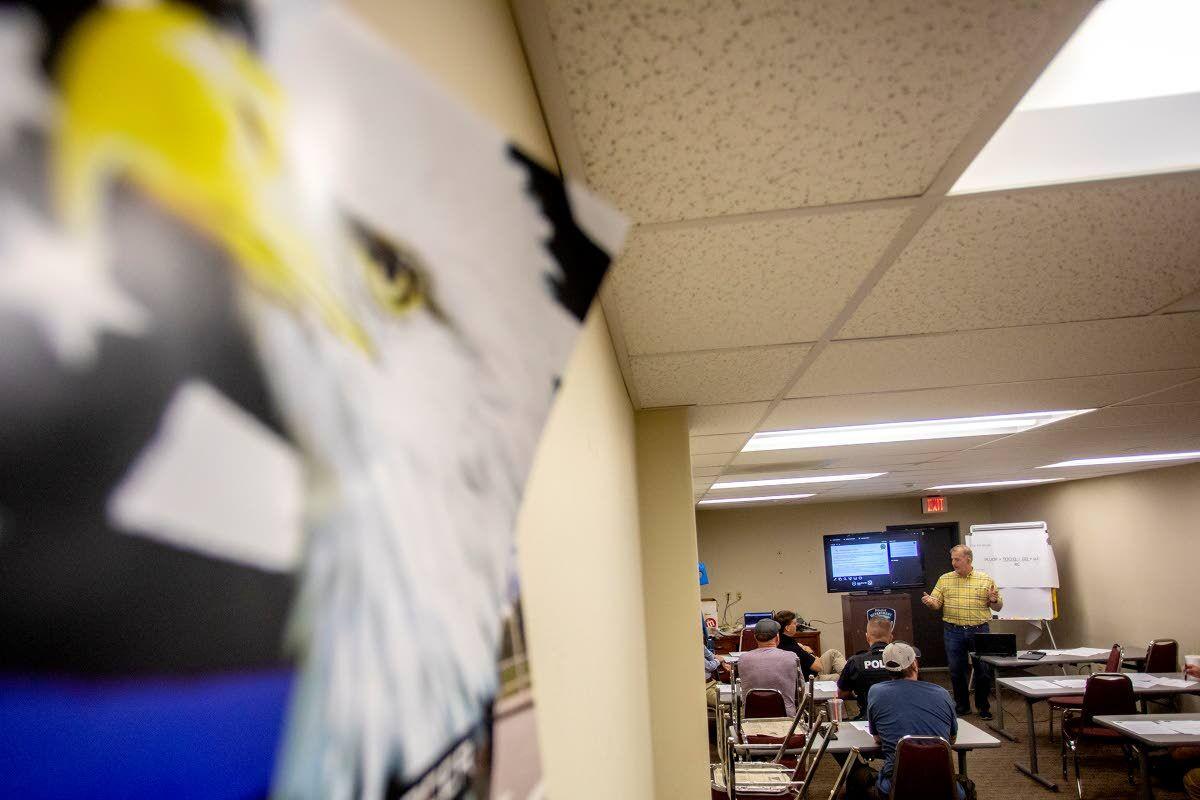 Clarkston police attend a training Thursday at the Clarkston Police Department. The officers reviewed changes to Washington state law that affect how they respond to various types of incidents. 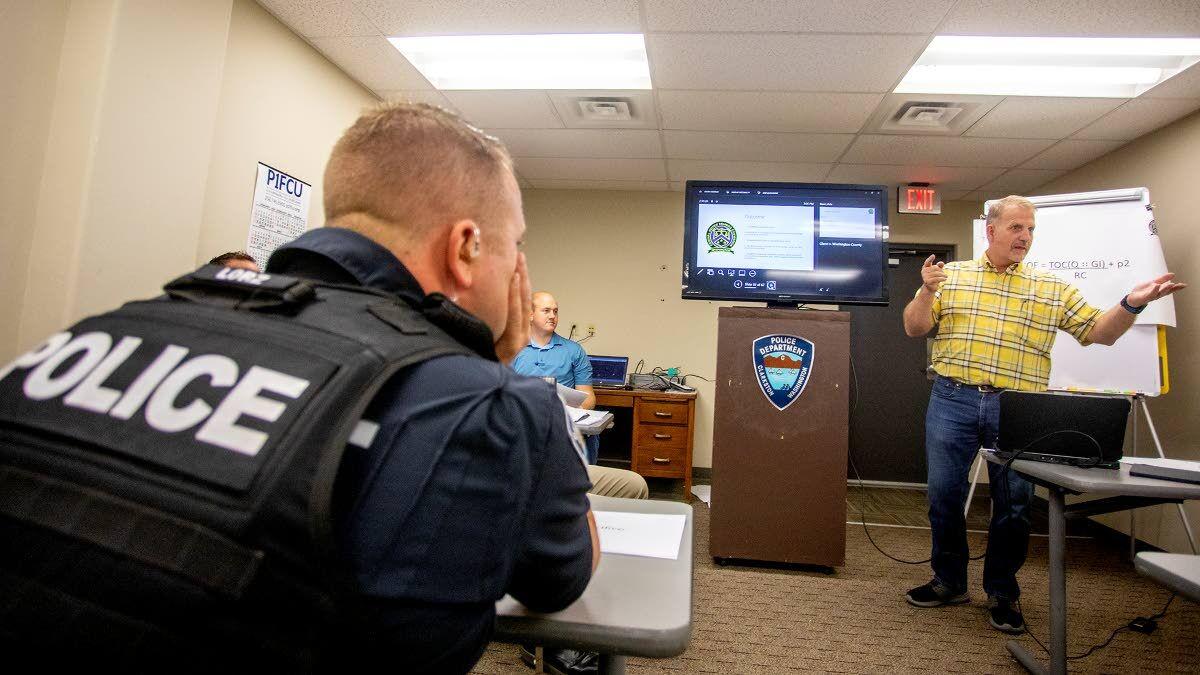 Clarkston City Attorney Todd Richardson points to definitions as he leads a training at the Clarkston Police Department.

Clarkston police attend a training Thursday at the Clarkston Police Department. The officers reviewed changes to Washington state law that affect how they respond to various types of incidents.

Clarkston police, and every other jurisdiction in the state of Washington, has a new set of laws to follow today.

Police accountability legislation, prompted by the deaths of George Floyd, Breonna Taylor and others, include bans on use of chokeholds, neck restraints and no-knock warrants.

In addition, the dozen police reform bills signed by Gov. Jay Inslee require officers to intervene if another law enforcement official engages in excessive force — a law inspired by the officers who didn’t stop Minneapolis officer Derek Chauvin from pressing a knee to Floyd’s neck for more than nine minutes.

The bills create an independent office to review the use of deadly force by police, make it easier to decertify police for bad acts and require officers to use “reasonable care,” including exhausting deescalation tactics, when carrying out their duties. The use of tear gas and car chases are restricted, and it’s easier to sue officers when they inflict injury.

Clarkston Police Chief Joel Hastings said his department has been preparing for the changes and underwent training last week to adapt and “continue to provide the best services possible under the new laws.”

“We can do this,” Hastings told his officers. “We’re up to the challenge. As a whole, these bills may have a positive impact on violent interactions between law enforcement and the public.”

Agencies across the state have concerns about the unintended consequences, but the Clarkston Police Department is focusing on following the rules and educating the public about the changes, he said.

Law enforcement now must have probable cause to arrest someone before using force, the chief said. In the past, reasonable suspicion was enough to warrant force to detain an individual.

For example, if police respond to a shoplifting case or vehicle prowl at Walmart, and an officer sees a person matching the description of the suspect, they may have to let them walk away, rather than detaining the individual.

“A lot of investigations will now have to take place after the crime,” Hastings said.

The Mark Domino case at Walmart may have been handled differently under the new laws. Police were called about a suspected vehicle prowl, and Domino was tased and arrested after reportedly obstructing a police officer and resisting arrest. He had been getting into his own car, and was later awarded $25,000 in a settlement with the city of Clarkston.

“We’re still going to respond and lay eyes on the situation,” Hastings said. “We will continue to respond to behavioral health episodes as we have in the past. If there is an imminent threat, officers will attempt deescalation and take appropriate actions.”

As for the ban on chokeholds, Hastings said his officers didn’t use that tactic anyway. He also can’t recall a no-knock warrant being executed in the city, so that rule won’t affect his department.

The Blake decision, which makes drug possession a misdemeanor, is already in effect. If an officer sees a person at a local park using heroin, the officer now has to take it away and give the user a referral list for drug rehabilitation help, rather than making an arrest.

“If the same person is caught a third time, the individual can be cited for a misdemeanor,” Hastings said. “The intent is to get more people into rehab, but we have concerns over our ability to effectively impact neighborhood drug problems. We receive lots of drug house complaints, and letting people go is going to create confusion.”

The current Asotin County Jail doesn’t have room to hold people charged with misdemeanors, so most are booked and released.

During last week’s training, Clarkston police responded to a variety of scenarios, based on the new laws. City Attorney Todd Richardson, who outlined the bills in detail, said the officers controlled the scene and their response was “exactly correct.”

Officers are required to have a less-lethal option on hand and to make decisions about whether the suspect is an imminent threat. They were instructed to write detailed reports, explaining their decision-making and any use of force.

“You’re going to be put in some situations that were more dangerous than the past,” Hastings said.

Use of tear gas is limited to riots or a hostage situation and must be considered as a last resort. Before tear gas is used, Clarkston officers must first get permission from Mayor Monika Lawrence. Other agencies, such as the Asotin County Sheriff’s Office, will have to get the green light from the top elected official in the jurisdiction, the chairman of the board of county commissioners.

Uniformed officers must be identifiable with names and badges. Vehicular pursuits are limited to violent crimes, a sex offense or escape. If an officer has reasonable suspicion of a DUI and the person poses an imminent threat to the safety of others, a pursuit can be authorized by a supervisor.

Officers cannot fire a weapon at a moving vehicle unless it is necessary to protect against an imminent threat.

Use of force is limited to preventing an escape, making an arrest based on probable cause and protecting the safety of an officer or the public. When a serious use-of-force incident occurs, the agency must report it to the Office of Independent Investigations.

Starting next week, the Office of the Attorney General will establish an advisory group to develop and implement a statewide use-of-force data program. The Office of the State Auditor will begin conducting compliance audits of any deadly force investigation.

At the local level, the police chief doesn’t expect to see any major shifts on how his department operates.

“We will continue to make keeping the community safe our priority and uphold the laws to the best of our ability,” Hastings said. “We will adapt and do our best under these new laws, but we also recognize the challenges.”