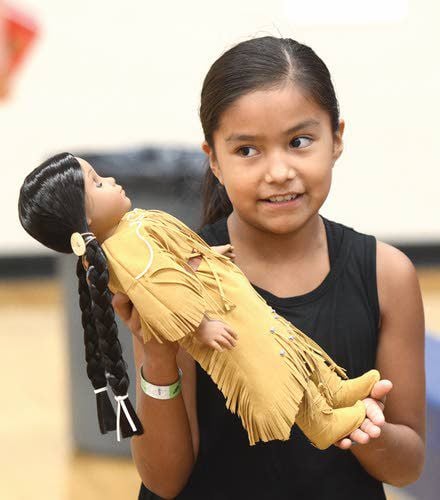 Madden Bisbee, 9, of Lapwai, cradles the Kaya doll she received at the 15th anniversary celebration of the American Girl doll and books based on the Nez Perce Tribe’s history. 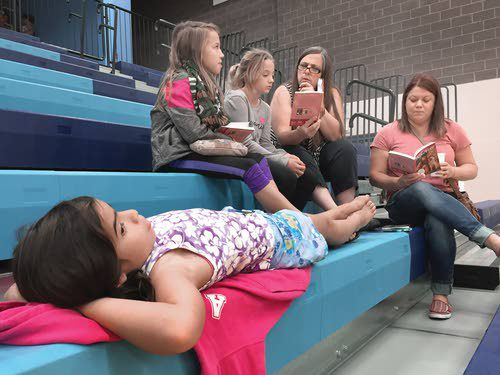 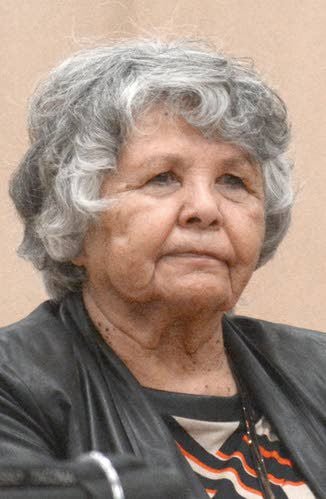 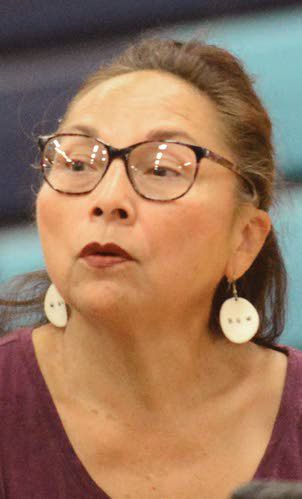 Madden Bisbee, 9, of Lapwai, cradles the Kaya doll she received at the 15th anniversary celebration of the American Girl doll and books based on the Nez Perce Tribe’s history.

The girls were arriving for the 15th anniversary celebration of Kaya, a fictional Nez Perce girl whose story fills the pages of several books and whose likeness is embodied in the 18-inch-tall dolls manufactured by American Girl.

More than 60 fourth-graders from Lapwai, Kamiah, Orofino and Culdesac participated in a two-hour Kaya read-a-thon before members of the advisory board who helped create the Kaya story presented them with Kaya dolls of their own.

Madden Bisbee wasted no time freeing her doll from the box. The 9-year-old Lapwai student held the doll aloft, examining her beaded dress and braided hair.

Natalya Greene, 9, of Lapwai, hugged the box that held her new doll.

American Girl donated 100 of the $115 dolls with books, the rest of which will go to students at Clearwater Valley Elementary School in Kooskia, area public libraries and to the tribe for a raffle.

Lapwai Superintendent David Aiken, a former teacher, said the doll and books spoke to both girls and boys when he had them in his third- and fifth-grade classrooms.

"It's amazing how Kaya has played such a big role in my experience here." Aiken said. "I used the Kaya series to integrate Nez Perce language and culture."

Jodi Goldberg, director of content for American Girl, traveled from Madison, Wisc., for the event.

"It was just an amazing advisory board that came together to create this character," Goldberg said.

The company, now owned by toy giant Mattel, sent Goldberg to Lapwai to meet with tribal members during the six-year process of developing the Kaya doll and books. She became close with many on the board, and Friday they presented her with a Pendleton blanket in thanks for her efforts.

Tribal members lauded the doll and accompanying books for accurately portraying Nez Perce culture when the series debuted 15 years ago, and those sentiments were reiterated Friday.

"My main focus was in the storyline, the accuracy of things," Mallickan said. "I feel like the storyline was very, very important - and it's actually part of our healing."

Mallickan said she doesn't see young girls playing with dolls as much today as when she was young.

"I was a real tomboy, but I still had dolls," she said.

The Kaya dolls, though, seemed to capture the girls' imaginations Friday.

Cynthia Picard, 9, of Lapwai, said she'd never read the Kaya books before, but she was excited to get the doll - and she was sure her 4-year-old sister would want to play with her, too.

Brynnlee Hanna, 9, has other American Girl dolls at home, but she wasn't familiar with Kaya before the event.

"I learned that Kaya was from the Nez Perce tribe," said Hanna, of Orofino, "that she's a brave girl and she's very independent."

"I look out and see a bunch of Kaya dolls sitting out there, and they're all so beautiful," Miles told the girls. "I just want you to follow your dreams and be leaders of your people."

Miles got a hug from grandniece Emily Arthur, 9, after the doll presentation. Arthur said she was excited to get a Kaya doll and read about a Nez Perce - or Nimiipuu - heroine.

Arthur was joined during the read-a-thon by Julie Clark, a behavior intervention coordinator for the Lapwai School District.

"I volunteered to come down here, because I was so excited to get to read with the girls," Clark said. "What's really been fun, though, is the kids have been making connections to their own culture."

Other students connected to challenges in Kaya's story.

Kaya got in trouble, said 9-year-old Jessica Bateman, when she disobeyed her parents and rode her horse when told not to.

The scenarios and characters in the books are historically accurate, Kristen Bateman explained, but the Kaya character is fictional.

Jessica wasn't so sure.

"It just sounds so real that you think it's actually real," she said. "And it might have been."