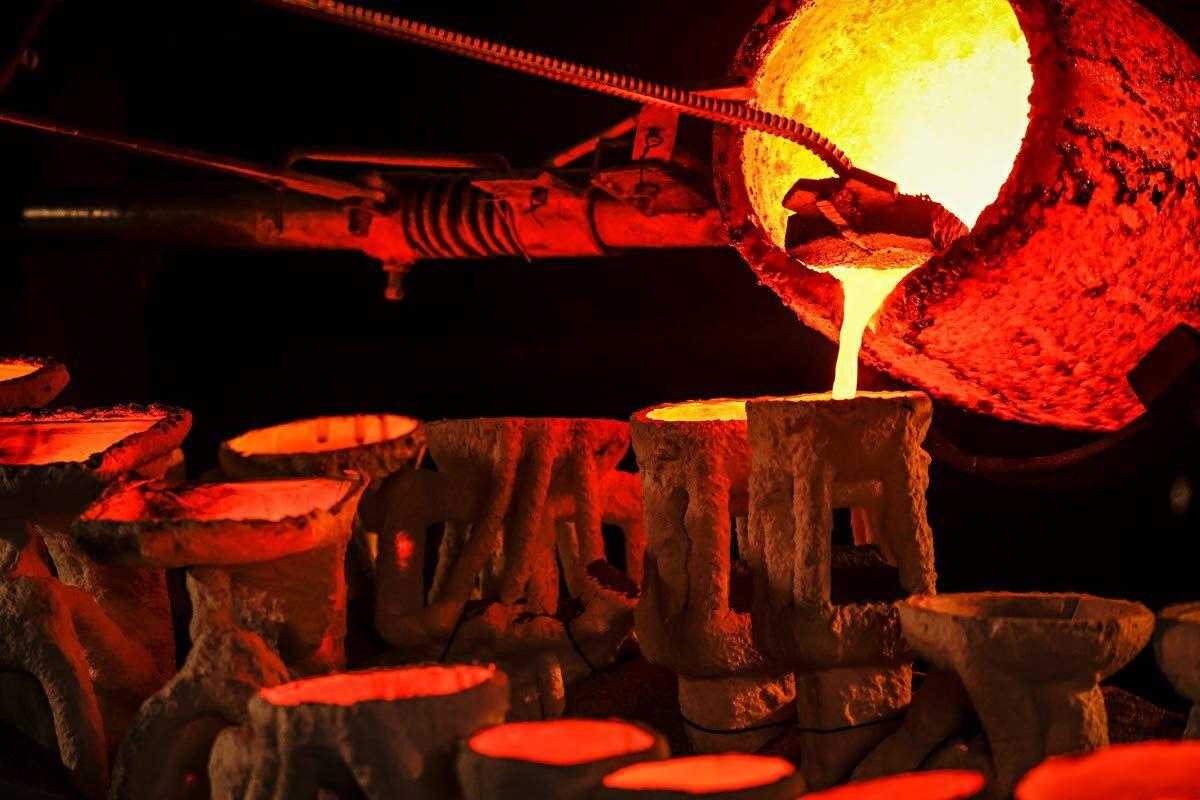 Molten bronze is poured Nov. 4, 2021, from a crucible into molds at 2,000 degrees at Kalispell Art Casting Inc. in Evergreen, Mont. 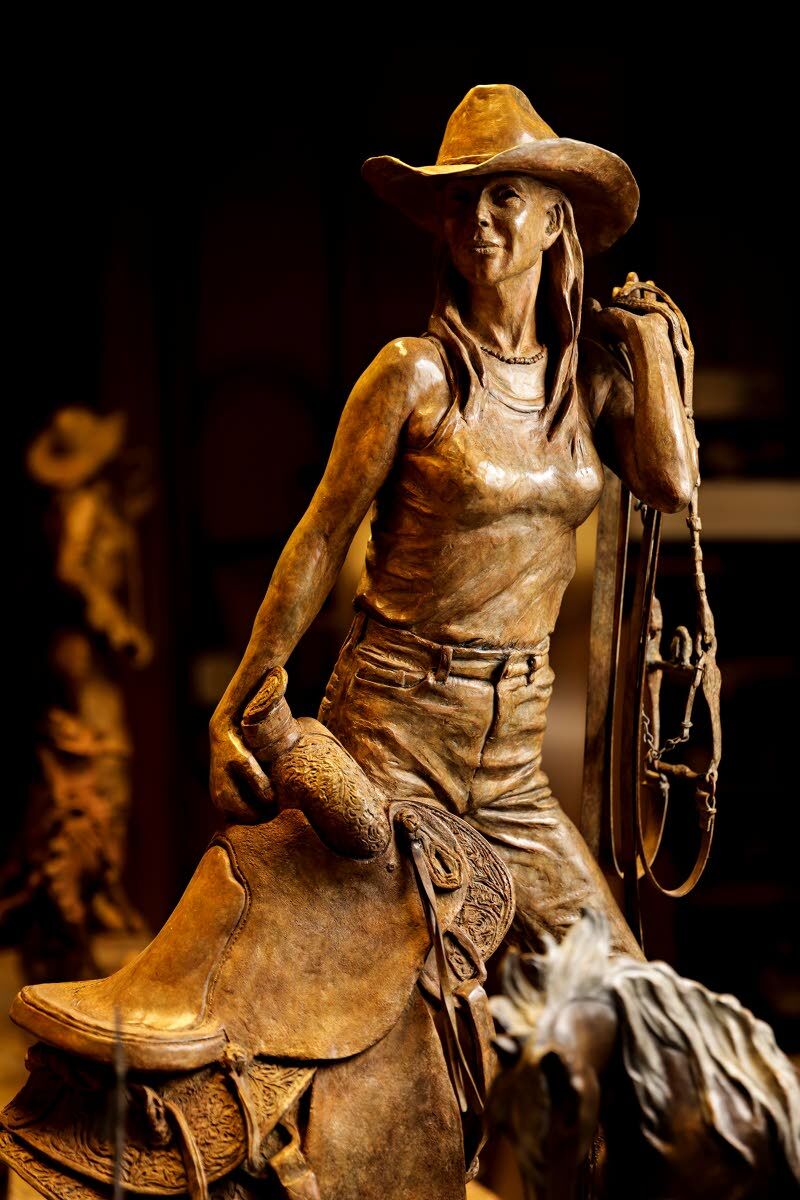 A completed bronze casting i son display at the Kalispell Art Casting in Evergreen, Mont., on Nov. 5, 2021. (Hunter D'Antuono/Flathead Beacon via AP) 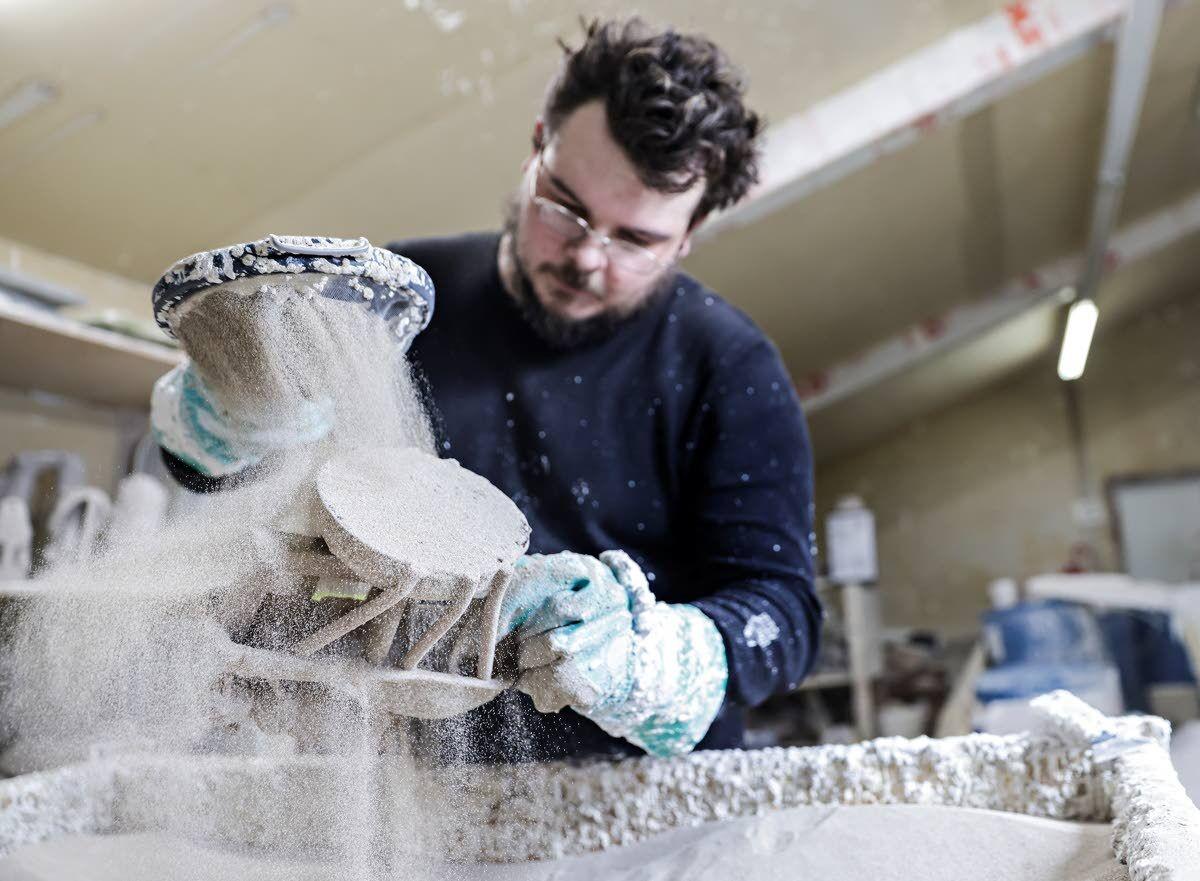 Molten bronze is poured Nov. 4, 2021, from a crucible into molds at 2,000 degrees at Kalispell Art Casting Inc. in Evergreen, Mont.

A completed bronze casting i son display at the Kalispell Art Casting in Evergreen, Mont., on Nov. 5, 2021. (Hunter D'Antuono/Flathead Beacon via AP)

Inside the building, the rumble increases as the reverberations drum against the walls. The room is dark except for a cauldron of florescent green flames in one corner, the source of the thunder.

Between the noise, the intense heat emanating from the corner and the singed, acrid air, it’s easy to feel like a character in the climactic final chapter of the Lord of the Rings standing near the entrance to Mount Doom.

Mike Stephan, the foundry’s co-owner, and two employees stood around the inferno in leather aprons, thick gloves and face shields.

“Fair warning, it does splash around and it’s coming out at 2,000 degrees,” Stephan told a Flathead Beacon reporter, as he shut off the conflagration and fastened a six-foot metal frame to a thick crucible of molten soup.

It took two men to walk the 380-pound crucible a few feet over to an elevated sandbox full of plaster moldings. Carefully, Stephan tips the crucible over each mold and pours out a white-orange stream of liquid bronze. A few splashes of bright metal flies across the floor of the foundry, quickly cooling into blackened metal drops.

By the time a dozen molds are filled to the brim, the exposed bronze shows a fully chromatic range, darkening with each cooling moment.

“You can tell how hot the bronze is by how quickly a penny will melt,” Stephan said, flipping a coin onto one of the recently cast statues.

For a moment the coin did nothing but appear as a dark circle on a dull red background. But soon it began sparking and glowing, a mini fireworks show that served as a finale to a fiery process.

Kalispell Art Casting — part studio, part foundry, part gallery— sits on two acres of space in Evergreen, just off U.S. Highway 2. With 20,000 square feet of floor space, it’s the largest foundry in the state and one of the largest west of the Mississippi. Stephan recently took partial ownership of Kalispell Art Casting from Jack Muir, who founded it in 1979.

In an era of digital art and NFTs, bronze might not appear to be the most popular of mediums for artists, but Stephan said around 20 to 30 artists actively work with the foundry, and he sees close to 3,000 different artists at some point each year.

Bronze has been used to cast objects for millennia. A skilled artisan can use the copper and tin alloy to replicate a model with enough detail to capture any subtleties of design.

“I can mold a fingerprint,” Stephan said. “I could mold each strand of your beard. We can be very, very intricate with this process.”

The actual casting of the metal is the midpoint in the process, called the “lost wax process,” of crafting a bronze sculpture, one that involves numerous people and several stages, each laid out in a different room of Kalispell Art Casting.

Artists will approach the studio with a model sculpture they want to see in bronze. The models can be made from anything Stephan said, but wax or clay is the most common medium.

From there it is photographed and, depending on the size, cut into pieces based on how it will be cast. Stephan says that the largest pieces that can be cast on-site measure about two feet wide, meaning large-scale creations, such as the life-size moose that guards Sportsman and Ski Haus in Kalispell, are assembled from many parts.

Once the model is sized, the clay is covered in a silicon rubber with a hard plaster shell. From there, it goes through a series of switching between wax copies and plaster molds.

“It’s a series of positives and negatives until eventually, we have a full positive that will be in bronze,” Stephan said.

Inside Kalispell Art Casting, there are hundreds of statues at some stage of the process at any given time.

The penultimate positive is a wax copy that is dipped into a paste and then coated in three types of sand with increasing levels of coarseness. This sandy shell hardens in a kiln and the wax melts and flows outside leaving a hollow negative, ready for bronze. Stephan said the foundry will go through a metric ton of bronze in about a month, which based on the global economics of bronze can cost between $4 and $6 per pound. Depending on how busy the foundry’s schedule is, firings will take place multiple times a day to once or twice a week.

Prior to casting, the final molds are fired in the kiln one last time, the white shells giving off a cherry-red glow before they are placed upside down in the sand to await their molten filling.

Kalispell Art Casting’s staff will then work to weld sculptures together and make further refinements to the bronze, chipping, sandblasting and buffing away imperfections. Each piece is assessed by Stephan throughout the process for quality control.

“It’s a unique process and I know way too much about it at this point,” he said.

Stephan doesn’t consider what he does in the foundry to be “art,” instead styling himself and his coworkers as the middlemen of the artistic process, although he budges on this humility when it comes to the final steps of adding patina — liquid chemicals torch-burned into the metal to add color — which he’s been doing for just over a year.

“This is one of the hardest parts for me because I really have to be in the mind of the artist to see what they want the final statue to look like,” Stephan said. “What the artist has in his mind in terms of the color of plumage on an eagle, might look different to me, but it’s fun figuring that part out.”

Kalispell Art Casting has shipped statues around the world — and the work produced there is on display in museums and public installations around the country including Glacier National Park, the National Museum of Wildlife Art in Jackson Hole, Wyo., and the Denver Zoo.

“The work is just so fun and cool, but the reason I put myself in the front end of the business now is that I like dealing with the artists,” Stephan said. “Artists are just super cool people who have a different way of thinking. I love working with smart and quirky people like that.”