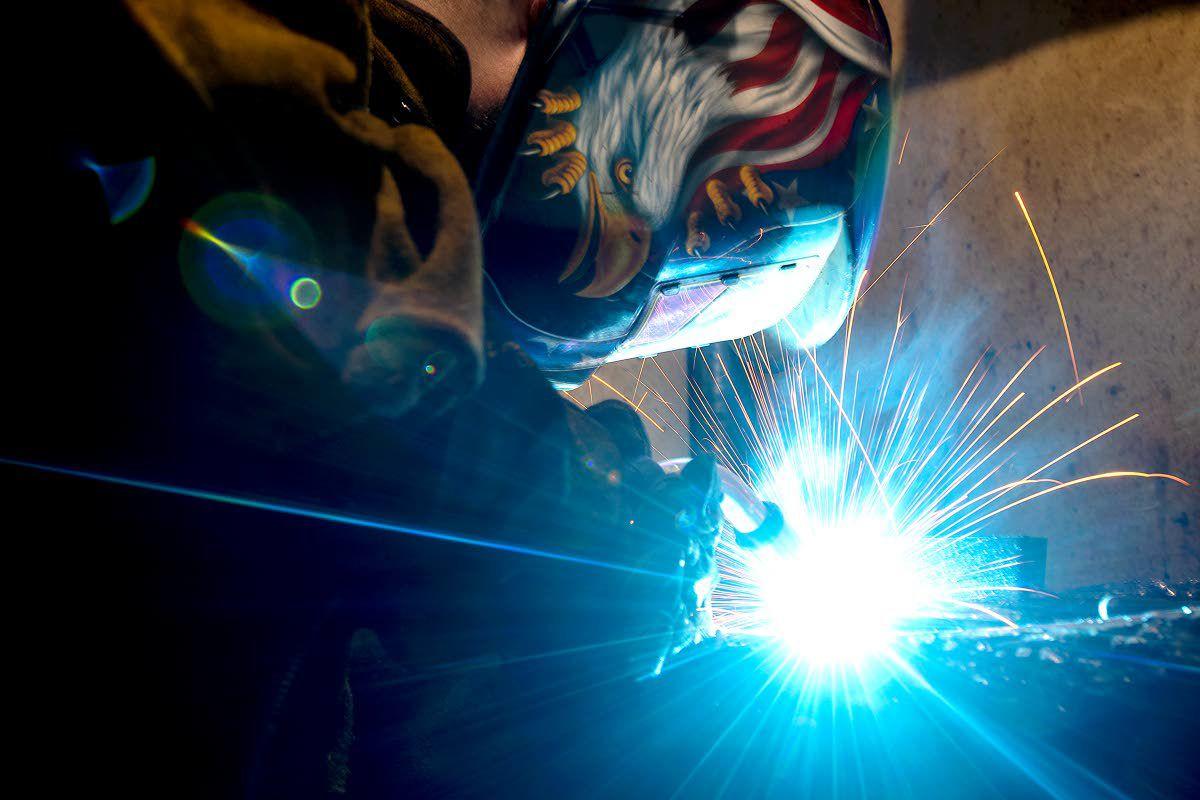 TOP PHOTO: Andrew Blanchard, a student at Lewis-Clark State College’s Career and Technical Education program, welds in class on Wednesday afternoon in Lewiston. ABOVE LEFT: An artist’s drawing of the college’s new planned Career Technical Education center. ABOVE RIGHT: Francisco Perez, of Pullman, looks to graduate from the program in spring 2020. 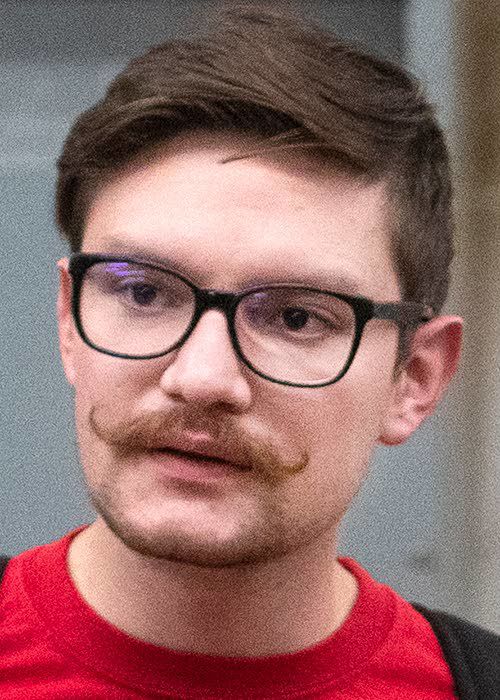 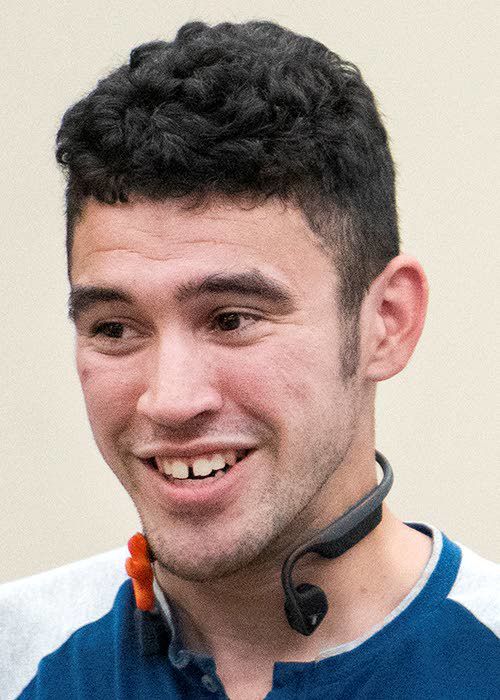 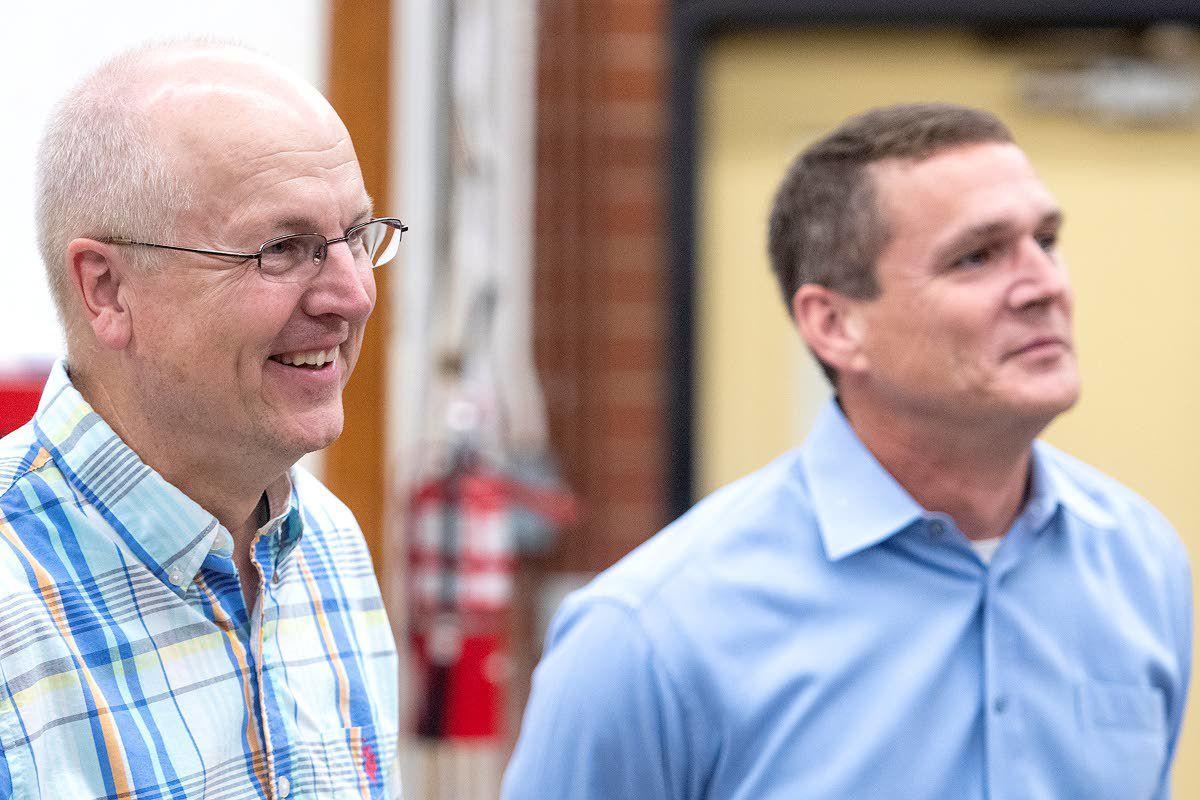 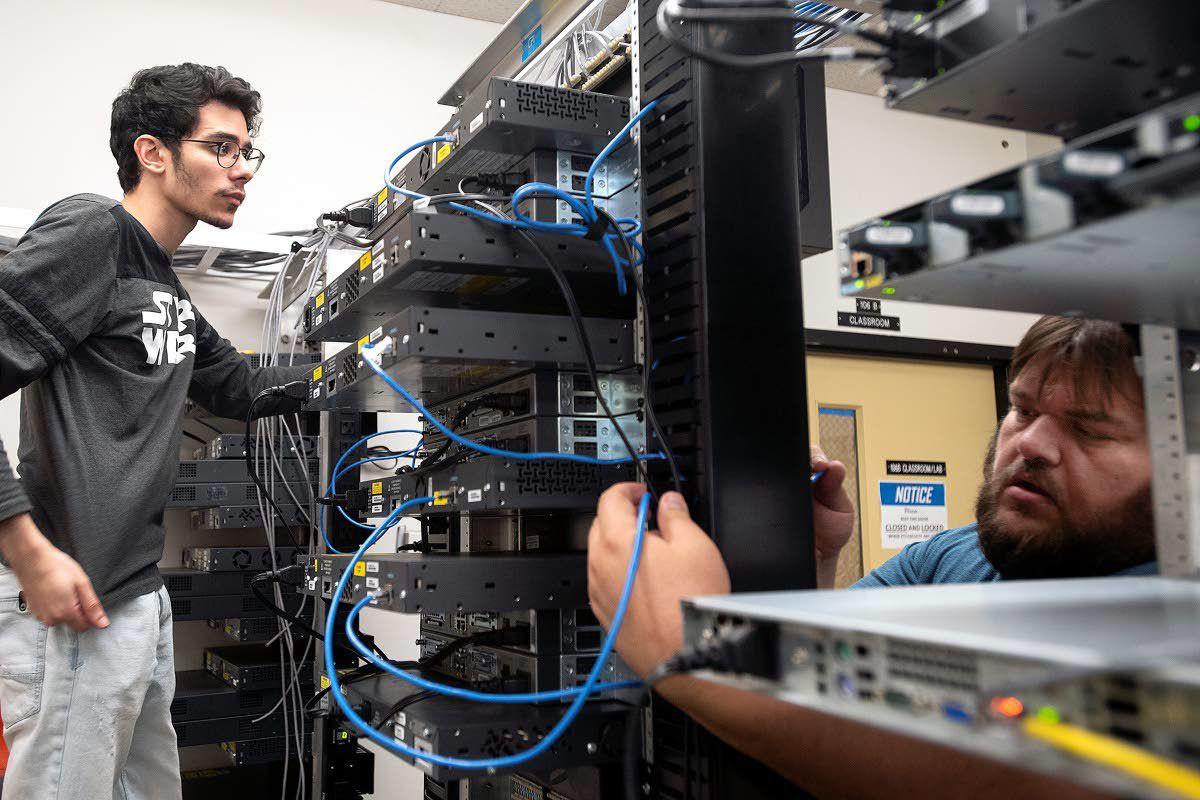 Lewis-Clark State students Sultan Almulla (left) and Anthony Cole set up set up servers for their class's internet connection on Wednesday afternoon in Lewiston. Both Almulla and Cole are studying Information Technology at LCSC's Career and Technical Education program. 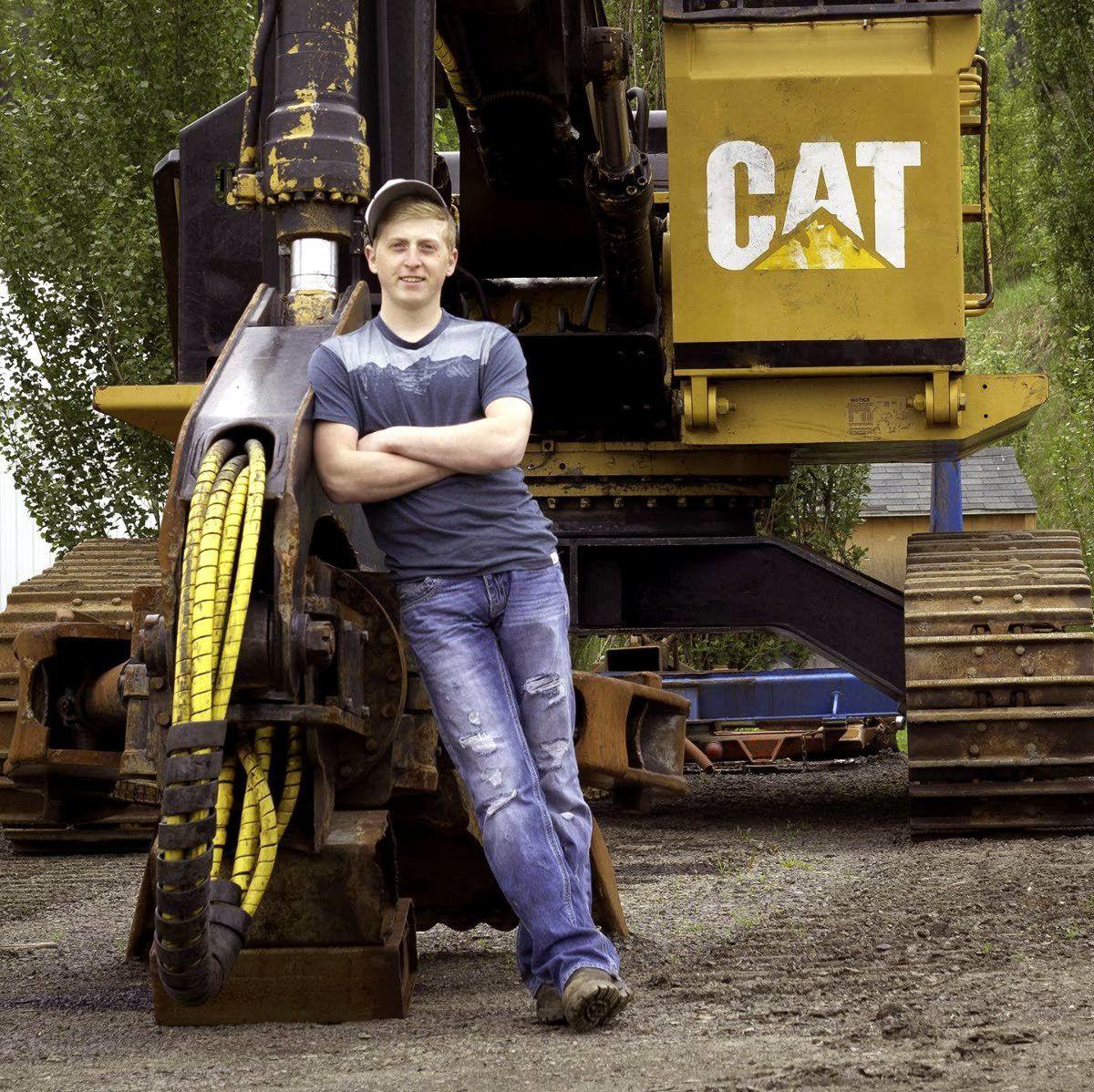 TOP PHOTO: Andrew Blanchard, a student at Lewis-Clark State College’s Career and Technical Education program, welds in class on Wednesday afternoon in Lewiston. ABOVE LEFT: An artist’s drawing of the college’s new planned Career Technical Education center. ABOVE RIGHT: Francisco Perez, of Pullman, looks to graduate from the program in spring 2020.

Lewis-Clark State students Sultan Almulla (left) and Anthony Cole set up set up servers for their class's internet connection on Wednesday afternoon in Lewiston. Both Almulla and Cole are studying Information Technology at LCSC's Career and Technical Education program.

Francisco Perez envisioned himself in the medical field, but that all changed when he took a metal shop class at Pullman High School his freshman year.

Now, Perez is the only student pursuing a bachelor’s degree in Lewis-Clark State College’s welding program.

Perez, 21, of Pullman, already has his associate degree in welding.

Once he graduates in spring 2020, he plans to join a boilermakers union in Seattle — a city with a population that’s exploding.

He’d like to dabble in every branch of welding, from the aerospace and jetboat industry to pipeline and structural welding, one day furthering his skills to also try hyperbaric, or underwater, welding.

“I’ve met a lot of people who don’t seem to think it’s important,” Perez said. “But we build the world, really. Anything from bridges to buildings to boats, so I feel we have a pretty big responsibility to provide people with safe infrastructure and safe products for either personal use or industrial use.”

As industries struggle to fill high-wage trade jobs, there is a big demand for students like Perez.

Each of LCSC’s about 30 career and technical programs has an advisory committee that reviews curriculum and makes sure students are learning the skills they need to be successful in their future career.

And all have expressed a need for more workers, according to Jeff Ober, dean of career and technical education at LCSC.

“I don’t think there’s anywhere there’s not a high demand,” he said.

The gap between skilled workers and available jobs is expected to grow, with fields like health care, manufacturing and natural resources struggling to get the workers they need.

There will be 138,000 new jobs created in Idaho by the year 2024, while the population of 18 to 65 year olds will only grow by 89,000, according to numbers provided to the Idaho State Board of Education last month by Dwight Johnson, state administrator of Idaho Career and Technical Education.

“Of that 138,000, we know that two-thirds of that will require some sort of training or education beyond high school for those workers to be successful in the knowledge-based economy that we’re in,” he said. “So we need more bachelor’s degrees and we need more graduate degrees, but a big chunk — almost 50 percent of that amount — can be met with something less than a bachelor’s degree.”

Mark Smith, the technical and industrial division chairman at LCSC, said 90 to 95 percent of students within career and technical education can acquire a job with an associate degree, although he said it depends on the type of program. Those pursuing fields in information technology or engineering technician have a more even split with 50 to 60 percent of students seeking an associate degree, while the rest pursue bachelor’s degrees.

Idaho is set to celebrate next year the state’s 100th year of providing career and technical education.

As the state approaches that landmark, two Lewiston educational institutions are boosting their offerings. In 2020, the Lewiston School District and Lewis-Clark State College are set to open new career technical centers in the Lewiston Orchards.

The school district’s approximately 38,000-square-foot building will locate all of its current career and technical education programs next to its new high school, and just 300 yards south of LCSC’s planned 75,000-square-foot career technical building.

“From the perspective of our board of directors, which includes all the biggest employers in the valley, talent and a qualified workforce is becoming our No. 1 issue we have to address with economic development, because it’s really becoming a barrier to local companies’ growth,” Dye said. “It runs the gamut from even introductory labor jobs and lower skilled positions, all the way up to different positions that require four-year degrees.”

The centers in Lewiston are anticipated to become a regional hub for students focused on career technical fields like precision machining, construction, health occupations and business education, among others.

Both facilities have received substantial grant funds — almost $662,000 for the school district and $1.52 million for LCSC — from the U.S. Department of Commerce’s Economic Development Administration.

Estimates released with the school district’s grant announcement state the new center is expected to create or retain more than 385 jobs, while stimulating more than $9 million in private investment. The college’s projected impact is even larger, with an estimated 391 jobs being created and the retention of 423 jobs, while generating $14.7 million in private investment.

‘You can point your finger and go anywhere’

Myles Simon is another LCSC student working to get his bachelor’s degree in career and technical education. Simon is studying information technology and plans to graduate in the spring.

He’d like to go to officer training school with the U.S. Air Force, afterwards.

Simon said his interest in the field didn’t blossom until after he graduated from Mountain View High School in Boise.

At LCSC, he began to study computer science, but that wasn’t for him, so he switched to information technology.

“If you are a kinesthetic learner, you’re going to be better at learning with your hands, and that’s what they kind of offer you over here in the vo-tech side,” Simon said. “You get hands-on experience with a lot of stuff, whereas you don’t get that in academia.”

Many students choose career and technical fields because they are set on what career they’d like to enter.

“Most of them come to CTE because they already know the job they want. They know they can get two years of training and get that specific job,” Ober said. “Most of them are very, very focused on getting the two years and getting that job.”

Now a diesel mechanic at David Henderson Logging, headquartered in Juliaetta, Zwerneman graduated from Lewiston High School. He went to Blue Mountain Community College in Pendleton, Ore., where he got his associate degree in applied science and diesel technology.

“It was just something that came pretty easy to me,” he said. “I had a lot of family that had been in this kind of industry, and so it kind of inspired me to do it.”

If he hadn’t decided to become a diesel mechanic, Zwerneman said he’d probably still be in college chasing his bachelor’s degree and likely acquiring debt.

But instead, he’s working in a well-paying field.

“As far as coming out of college with a (career technical) degree like that, depending on which field you’re in, you can be making $50,000 right off the bat, more or less. I make more than that,” he said. “And it’s not uncommon to be in this five or eight years and be making six figures, but that of course depends on how hard you want to work, what you put into it and how dedicated and motivated you are.”

Zwerneman knows his job will always be in high demand.

“Every industry has tons and tons of jobs,” he said. “You can point your finger and go anywhere.”

“It’s hard for them to find people,” he said. “They’re looking for past graduates, or even current students who can do an internship.”

The future of CTE and industry

The career and technical program, which offers basic certificates to bachelor’s degrees, boasts a 97 percent placement rate for its graduates.

“In many CTE fields, our graduates have jobs in the field before they actually finish their training at LC through opportunities such as internships and job visitations,” according to information provided by the college.

Lewiston High School will align its programs and coordinate with the college and regional industries, Hansen said. Students at the high school are required to take a career/technical credit in order to graduate. Numbers show there are 901 ninth- through 12th-grade students in the district enrolled in one or more career technical courses.

“Our goal is to maximize the offerings that are available because of the opportunity presented by the new building, and that includes the programs that we have,” Hansen said.

Partnerships have formed with area businesses to get students specifically trained for the work at hand.

Schweitzer Engineering Laboratories, based in Pullman, is one example. The company will work with LCSC to expand the school’s electronic technician offerings as its new career and technical education center comes online.

Other partnerships and an increased capacity for students at both centers will help create a “talent pipeline” of sorts for local industry, Dye said.

It will take time before the impact of the increased focus on career and technical education in the Lewiston-Clarkston Valley can be measured, but Dye said the new facilities are a step in the right direction to ensure retention of industry, as well as the addition of new industry.

“It’s really retention first, keeping the great companies we have, while removing the barriers to growth,” Dye said. “If we do a good enough job and have access to a supply of talented labor force, we can use it to to bring companies in that would move here specifically for that talent.”