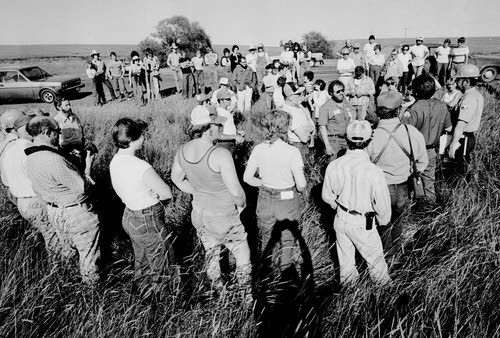 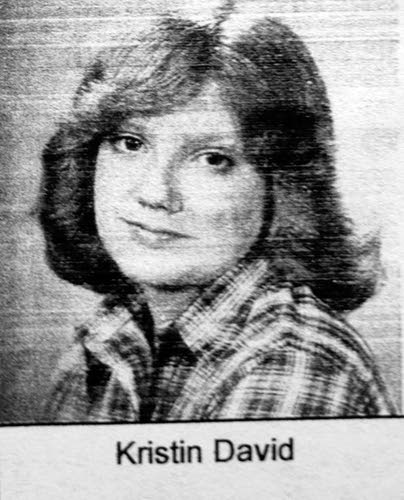 The evidence collected 27 years ago after Kristin David died is carefully maintained by the Federal Bureau of Investigation in Salt Lake City.

Some of it is in cold storage; all of it has been reprocessed by the FBI lab at least twice, once in the 1990s and again last year.

As technology advances, says FBI Special Agent Ron Miller, of Lewiston, "we tried to look back and see if there's anything we can develop as new evidence."

He will not divulge if anything new was found, however, because the case is still on the active list.

"But we continue to look at this," Miller says. "It's not just something that's sitting around. We continue to investigate it."

David, 22, disappeared June 26, 1981, while riding her bicycle from Moscow to Clarkston. She was a senior majoring in broadcast journalism and political science at the University of Idaho, headed to the valley where much of her family lived.

She was reported missing the following day, and searchers walked the roads and ditches for days, searching for any sign of her or her bicycle.

Then, on July 4, a headless human torso and a leg were found by a boater on the shore of the Snake River about a half-mile west of Chief Timothy State Park and six miles below Red Wolf Crossing. The remaining body parts were found the following day, some near the first, others just three miles below the bridge.

Initial news reports said there were multiple stab marks. Law enforcement even now, even officers who have been retired for 25 years, refuse to say how she died. They say only that it is being withheld in case someone confesses or is arrested.

If someone makes a mistake and says how she died, please don't print it, Miller asks.

Blood was found on the railing of Red Wolf Crossing, but officers have declined to confirm it was David's.

Her bike was never found.

Blood was found in a Lewiston motel room. It apparently had no connection, but the place where David died was never found, and DNA testing was still a couple years away.

No one was ever arrested, despite work by officers in four counties and two states and at least a couple of cities. That multi-jurisdictional quagmire led to the FBI taking over the case although those other departments didn't quit working on it.

One of the strongest leads for a time was a report by a Genesee man, under hypnosis, who said on the day she disappeared he saw a man in a dark brown van with Oregon license plates who looked like he had stopped to help a young woman on a bike south of Genesee on U.S. Highway 95.

In the days that followed, brown vans with any state's plates were stopped frequently. One man reportedly quit driving his after repeated stops by law enforcement officers.

"We got on it right away because she kept in contact with a lot of people," says Michael Goetz, who had just started his second term as sheriff of Latah County. "I think we got where she was last seen on her bicycle," and then search and rescue teams and other volunteers walked the sides of the highway and back roads, checking empty buildings, just looking for anything out of the ordinary.

They found nothing, until the Fourth of July.

"The thing I remember is how frightening it was," Goetz, now 58, said in a telephone interview from his home in the Tacoma area. He had two small daughters, and it really hit home, he said. "I went home that night and, ... you don't sleep good."

He resigned later that fall and took a law enforcement job in Tacoma, where he still teaches driver education. That case follows him still, every time he hears of some drifter arrested in a similar case.

When people talk about the David case, it's frequently lumped in with two others, two years earlier and 15 months later. Christina White, 12, disappeared from the Asotin County Fair April 28, 1979, and three people went missing from the vicinity of the Lewiston Civic Theatre Sept. 12, 1982.

White and her bicycle haven't been seen since.

The bodies of the two women, stepsisters Kristina Nelson, 21, and Jacqueline (Brandi) Miller, 18, in the civic theater case were found in March 1984 at the bottom of a steep embankment near Kendrick, but the third person, Steven Pearsall, 35, has never been found. Police believe he is dead.

Law enforcement officers believe the same person was involved in White's disappearance and the civic theater cases even though they've never been able to charge him. But they have mixed feelings about the David case.

The suspect in the other cases was driving between the valley and the Palouse frequently and had access to a van. David had worked for a time at the civic theater and they could have known each other.

And there were the little oddities, like the similarities in three of four female victims' names.

"Three of the four, all about the same height, same name, you kind of start looking at that like, yeah, maybe," says Willie Russell, 65, a Lewiston police detective at the time.

Russell believes the same person likely killed all five. "What you think and what you can prove are two different things," he says.

"Not the same killer," says Don Schoeffler, 62, of Yuma, Ariz., who as a Lewiston police detective worked the cases almost exclusively for a year or more.

"Marginal. It's not as strong as the other two," says Alan Johnson, who was responsible for the Lewiston Police Department's part of the case for many years. He now is chief deputy at the Nez Perce County Sheriff's Office.

Schoeffler and a Whitman County deputy flew to Texas to talk with Henry Lee Lucas, then to Florida to see Ottis Toole. Both were spewing out confessions to a joint killing rampage across the United States that may or may not have been true. Schoeffler is satisfied they had no connection to David's death.

He's not so sure about another suspect, however.

An unsolved Colorado case came across the teletype one day that had some similarities. He contacted authorities about a suspect in that case, compared notes, traced the suspect through his military career and multiple transfers. "There was an indication he was in this area at the right time."

The Quad Cities' murder task force reviewed his findings and the FBI interviewed the man. Schoeffler recalls he was told there wasn't enough evidence to make an arrest.

"They didn't necessarily rule him out. Just no evidence."

He would feel better if he had been there for that interview, Schoeffler says, "just to convince me."

The case is entered into the Washington and FBI Violent Offenders databases, called VICAP. It's been checked against cases in California and Oregon and other locations. One looked like a strong possibility until a person was arrested in that case but couldn't have been involved here.

Detectives looked at serial killer Robert Yates of Spokane and Harry Anthony Hantman, who also lived in the Northwest, including Joseph, Ore., for 20 years under the alias Thomas Andrew Dorian. He had escaped in 1973 from a hospital for the criminally insane, where he was being held for the rape and murder of an 11-year-old girl. He was arrested in Lewiston in 1993.

"We lived and breathed those cases," Schoeffler says, repeating the words and sentiment of every other officer. "And to this day, it still bothers us."

No one, though, lives it as much as the families.

David had two sisters, a mother and stepfather in the Lewiston-Clarkston Valley who now live in California and a father and stepmother in western Washington.

"There's not much you can say," says John David of Kelso, Wash., her dad. "I'm 75 years old now. I was always hoping it would be solved before I left.

"I know it's not on the front burner, and not for many years. But I wish they could have kept working on it - continuously as far as I'm concerned."

He knows all the rumors - about the van, the possible connections to other cases, the people who were questioned in other parts of the country. He believes one person was probably responsible, someone acting alone.

"It's just something you never get over."

He sighs deeply. "I just wish it could be solved."