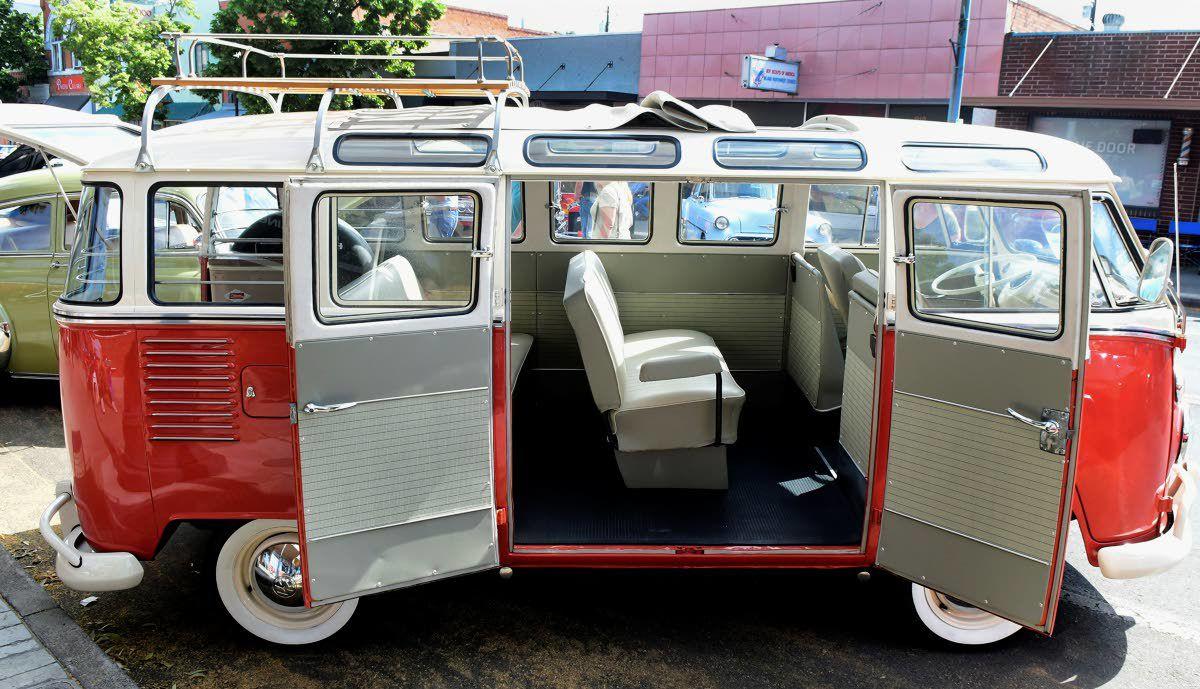 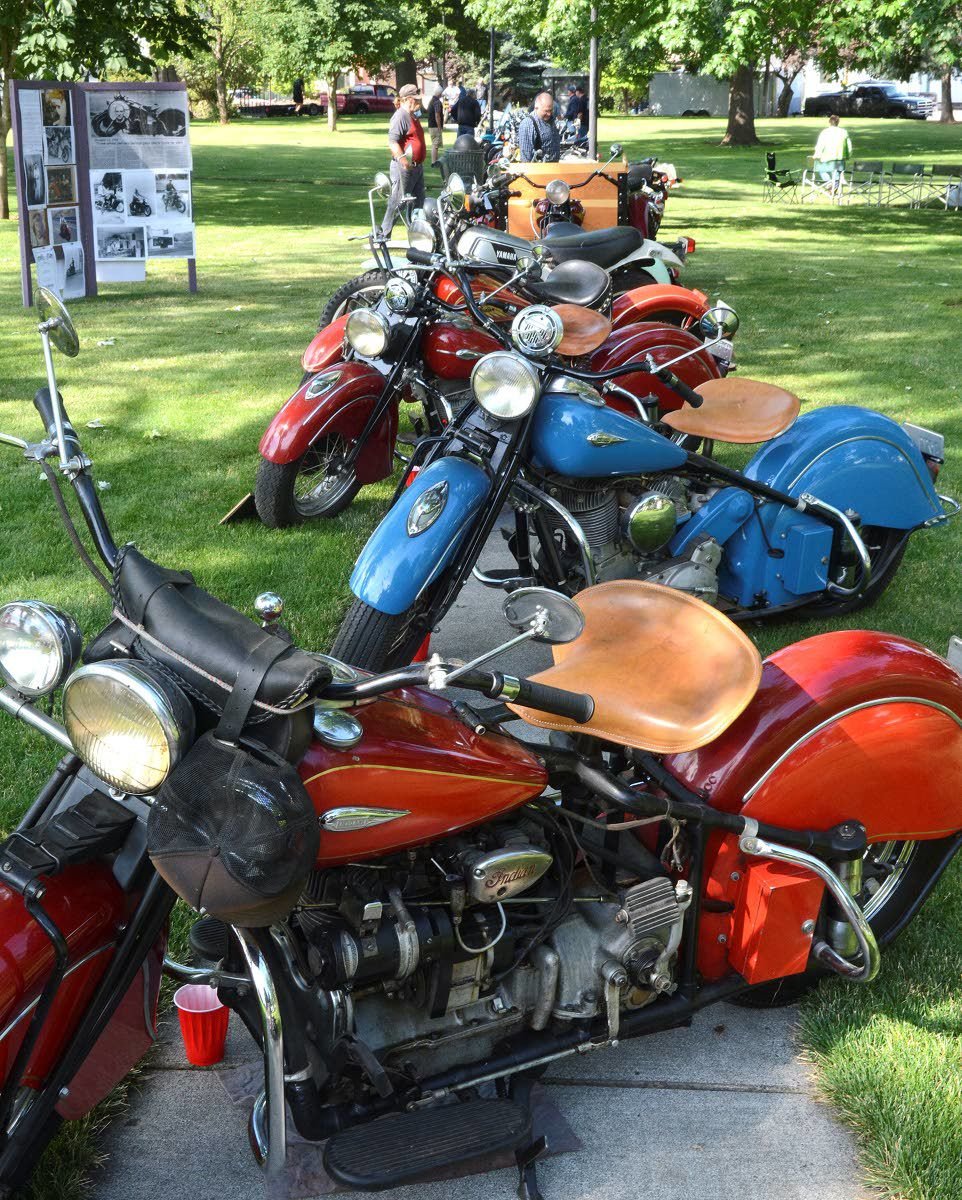 Vintage motorcycles covered the diagonal walkway through Vernon Park, giving the two-wheelers a wide perspective of their favorite mode of transportation. The display included Mac McClain's antique Indian Motorcycles (foreground) and most other brands and sizes that were 25 years and older. 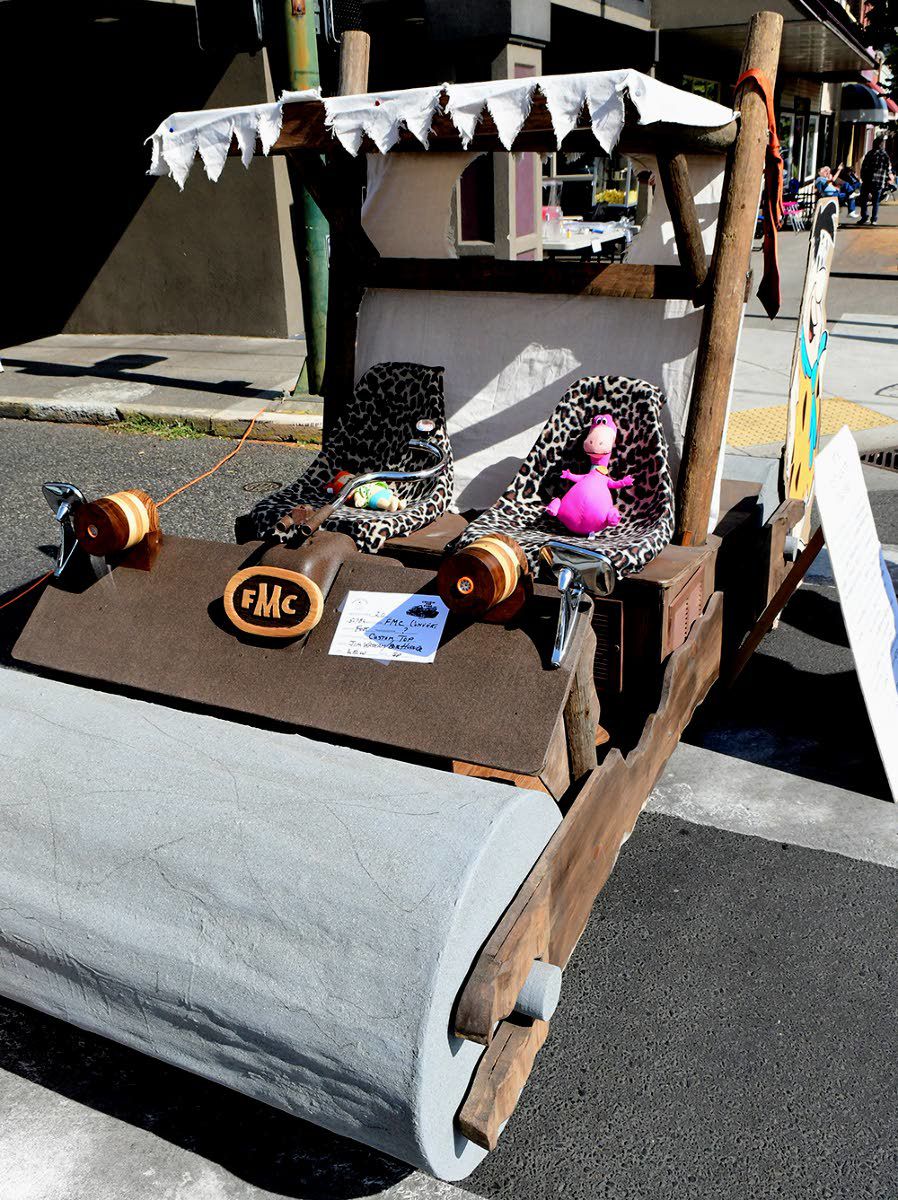 Jim Washam and Bob Hoover conconcted the idea for their Flintones car in a local bar.

Vintage motorcycles covered the diagonal walkway through Vernon Park, giving the two-wheelers a wide perspective of their favorite mode of transportation. The display included Mac McClain's antique Indian Motorcycles (foreground) and most other brands and sizes that were 25 years and older.

Jim Washam and Bob Hoover conconcted the idea for their Flintones car in a local bar.

It’s hard to know what’s more interesting at a car show: the classic vehicles themselves or the people who own them.

Bob Kesler of Lewiston could be a case in point. He’s not just the current owner of a Saturn Gold 1972 Oldsmobile 442, but the original owner who bought it off the showroom floor. A semi-professional musician who worked days at a grocery store at the time, Kesler said the purchase was no small feat.

The muscle car has been with him for all of the intervening 47 years, but not in the same condition that the droves of onlookers saw on Clarkston’s Sixth Street. Marriage was one of the first things that happened to Kesler after the Olds came his way.

“I’ve had the car a little bit longer than my wife,” he said, adding that he and Gerri Kesler took the car on their honeymoon to San Francisco.

It then moved with them to Inkom, just outside of Pocatello, for 16 years while Kesler was a teacher. When they came back to north central Idaho, he parked it on the road outside their Lewiston Orchards home. It wasn’t long before the requests to buy the car started coming in. But Kesler wouldn’t make a deal.

The car may have been his baby, but it wasn’t quite babied. It was their runner around town, picking up groceries and shuttling the family about. Kesler even mounted a trailer hitch and used it to tow a camper around the mountains on summertime vacations. And when they lived in southeastern Idaho, it was frequently left in the elements.

Down the street, Teresa Benner’s 1963, 23-window Volkswagen van was also turning heads. She bought it recently when it came up at a Barrett-Jackson auction in Arizona. She was smitten at first sight.

“I freaking love it,” Benner exclaimed after initially using another F-word to describe her affection. “It’s just the whole being of it, being in that era of life. Driving it, you just sit there and it’s straight as an arrow. It never shimmys. It’s fun. That’s what it is. Super fun.”

The retired Asotin resident has had a long association with VWs, dating back to the Thing she owned in 1974. And just to let any current Thing owners know, she’s on the prowl for another one. Benner also owned a Dasher after her Thing, and her parents once hauled her around in a Beetle.

“I’m a Volkswagen fanatic,” she said.

Jim Washam, one of the show’s many organizers, entered two vehicles. One was a shiny red 1970 Ford Mustang convertible that got plenty of attention. But the other ride was even more popular because it was unique: an old three-wheel Harley Davidson golf cart converted over last winter into Fred Flintstone’s signature wood-and-rock footmobile.

Now called the Flint 1 Roadster, it sports a model year of 507 B.C. Washam and drinking buddy Bob Hoover cooked up the prehistoric plan to build the car over more than a few snorts at BoJack’s in Lewiston.

It’s made of several kinds of wood – from old fence posts to richly grained zebrawood – door screens, fiberglass and a lot of good-natured fun. Washam wants to take it golfing, but hasn’t gotten up the courage yet.

“I’m afraid people will be aiming at me instead of the green,” he said.

He and Hoover decided to build the roadster so kids could climb all over it and pose for pictures, since they’re usually scolded for touching the vehicles at car shows. Washam said the 16-year-old show had 134 entries last year, and he expected to break that mark this year.

Another contingent of motor vehicle enthusiasts gathered just around the corner at Vernon Park for the Mac McClain Memorial Motorcycle Show, in honor of the founder of Mac’s Cycle. Together, the events brought a heavy turnout of both owners and oglers on the sunny, cool morning.

Kesler and his Oldsmobile were both in fine condition Saturday. The rain and sun wreaked havoc on the car’s exterior during its Inkom days, so he took it apart piece by piece and had mechanics restore it. Then he put it back together and had a body shop mix up the exact color of the original for a fresh paint job.

He sits on the car show’s board of directors, so he’s no stranger to the mindset that routinely brings people like him together to drool over each other’s machines. The one thing they all have in common?

“Nostalgia is a lot of it, I think,” Kesler said, noting the rollicking good time about 80 of the entrants had at the show’s social event the night before. “A lot of these people went back and bought the same kind of cars they had in high school and restored them.”

Gerri Kesler even got in on the act recently with the purchase of a turquoise 1963 Ford Falcon Futura convertible.