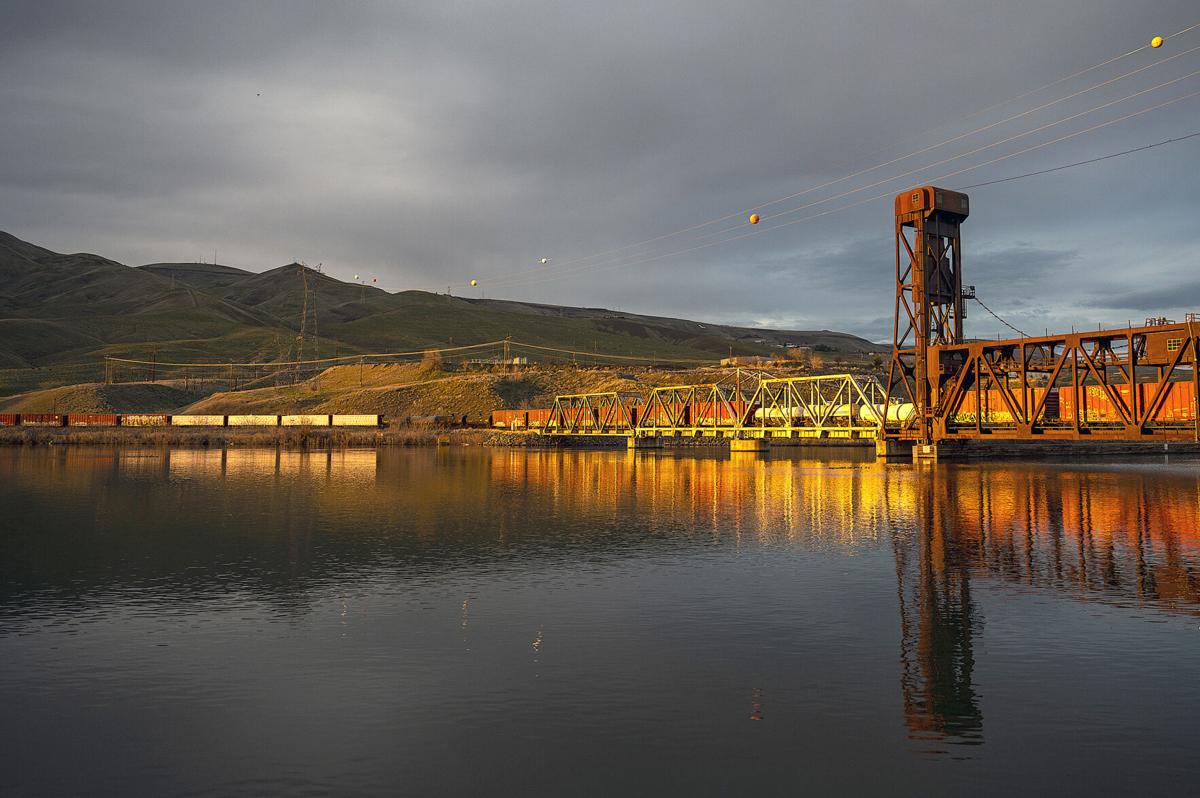 Evening sunlight beams onto the Clearwater River Railroad Bridge as a train headed eastbound crosses on Thursday, March 18, in Lewiston. 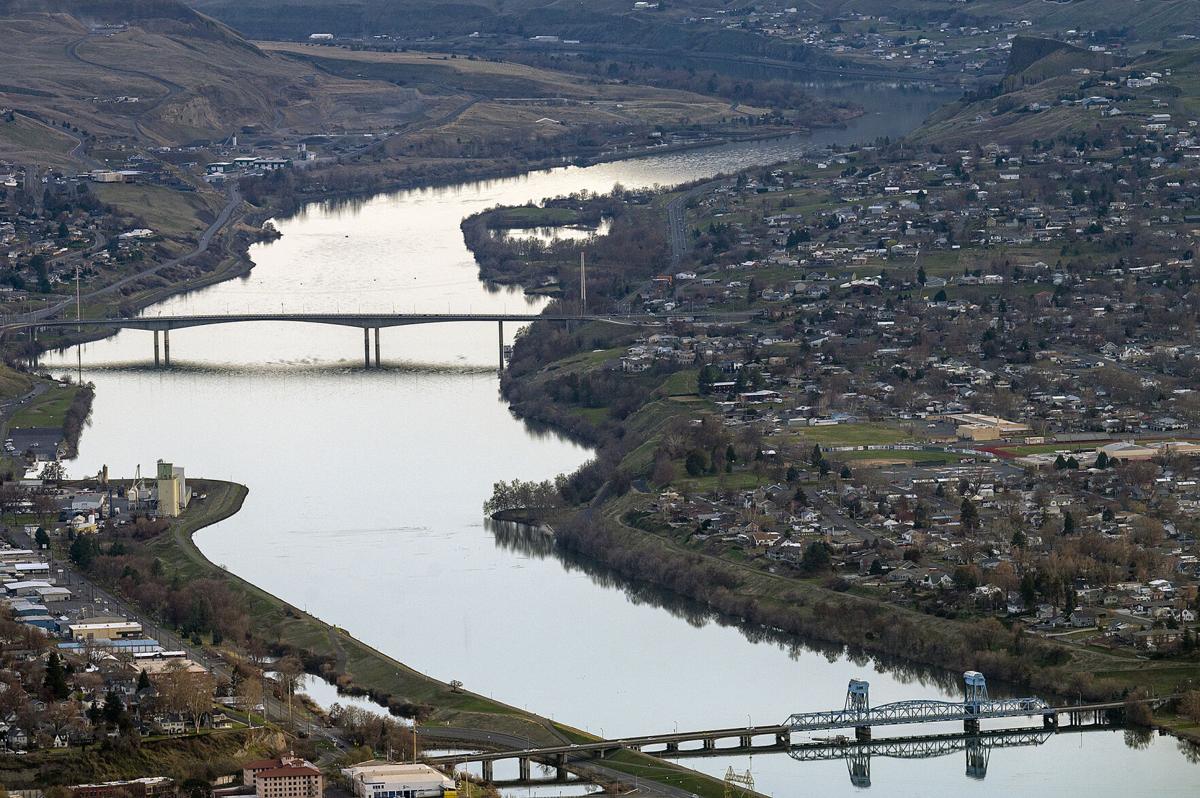 Slack water on the Snake River is seen in between Lewiston and Clarkston on Wednesday, March 17, from the Lewiston Hill. 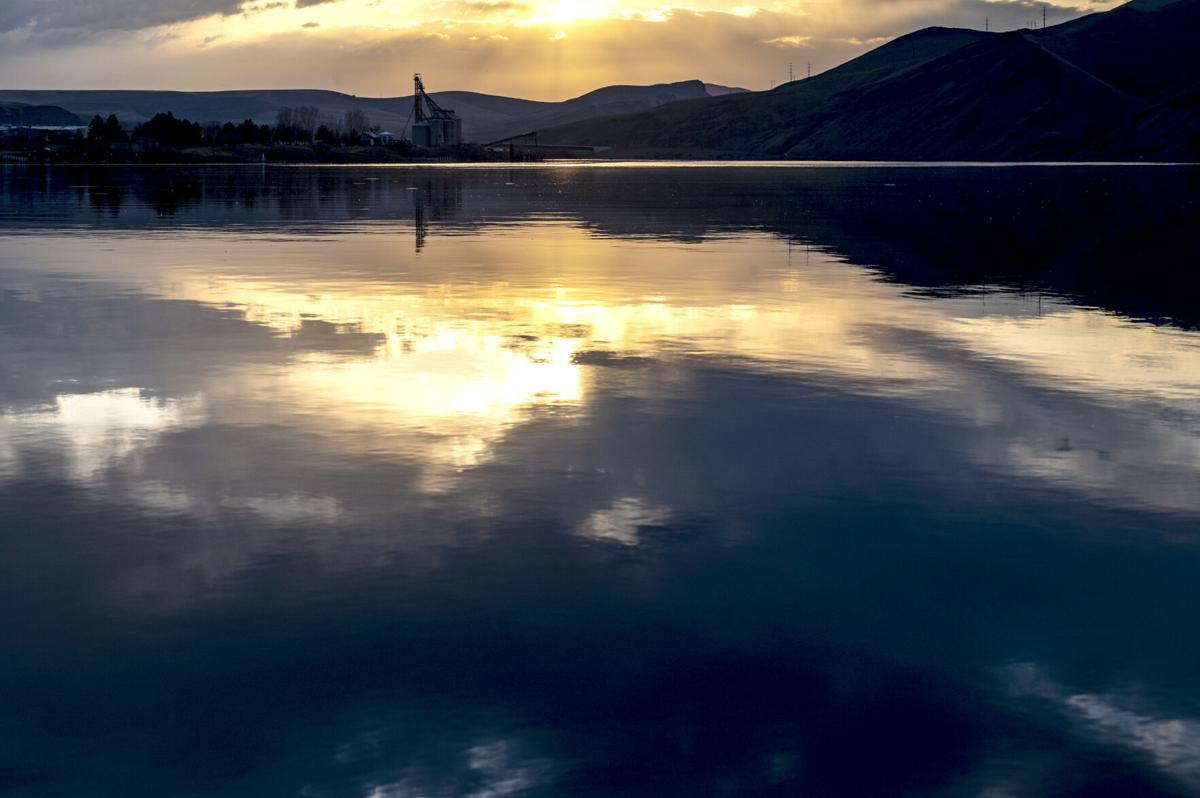 An evening sunset is reflected in the slow-moving waters of the Snake River on Wednesday, March 17, in Clarkston. 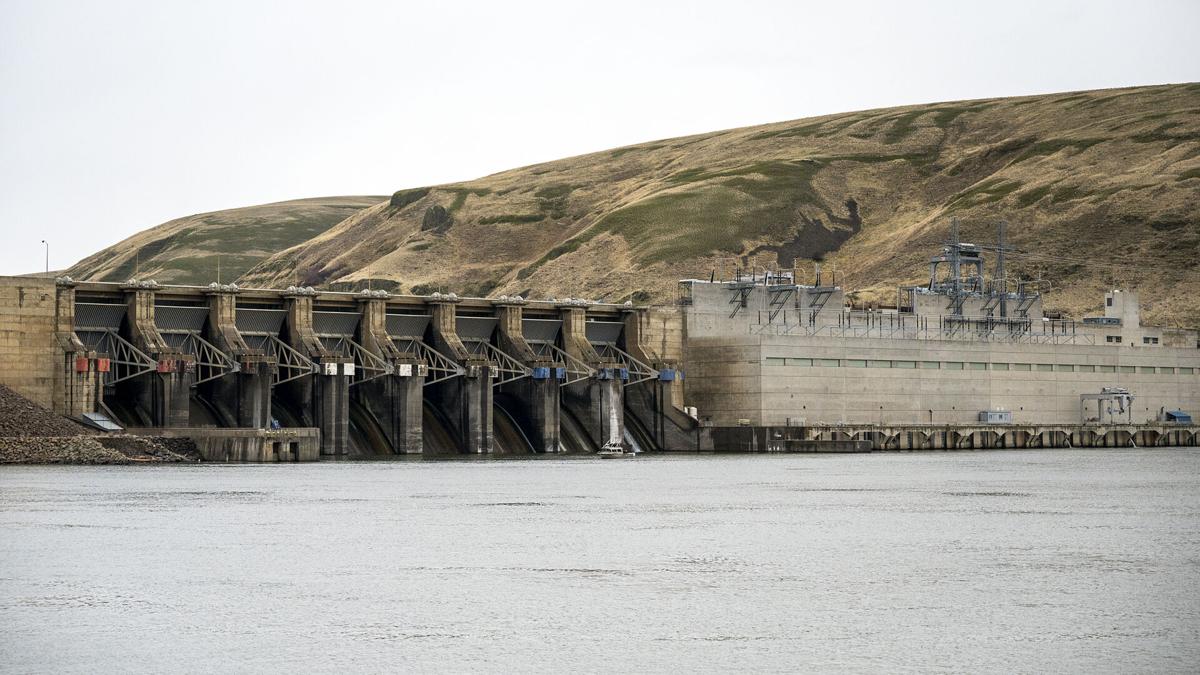 The Little Goose Dam is seen Feb. 2 along the Snake River near Riparia, Wash.

Evening sunlight beams onto the Clearwater River Railroad Bridge as a train headed eastbound crosses on Thursday, March 18, in Lewiston.

Slack water on the Snake River is seen in between Lewiston and Clarkston on Wednesday, March 17, from the Lewiston Hill.

An evening sunset is reflected in the slow-moving waters of the Snake River on Wednesday, March 17, in Clarkston.

The Little Goose Dam is seen Feb. 2 along the Snake River near Riparia, Wash.

It’s big and complex, carries a massive price tag and is politically risky.

Perhaps that is why Rep. Mike Simpson finds himself on a lonely piece of ground.

Last month, the Republican representing Idaho’s 2nd Congressional District unveiled his $33 billion concept for saving Snake River salmon and steelhead by breaching the four lower Snake River dams — something many fisheries scientists say is necessary not only to recover the threatened and endangered fish but to keep them from going extinct.

But restoring the river to its free-flowing state would eliminate about 1,000 megawatts per year of carbon-free power production and end tug-and-barge transportation between Lewiston and the Tri-Cities. Simpson’s concept would spend billions to replace the lost power, upgrade the Northwest’s electrical grid and help farmers, ports and riverside communities like Lewiston and Clarkston adjust to life without slackwater. It includes a 35-year moratorium on salmon-related lawsuits at remaining dams in the basin and extends their federal operating licenses. It charts a path for the Bonneville Power Administration to become more financially stable.

As he explains it, the plan aims to save the fish, end the salmon wars, reinvest in the Northwest’s power and transportation infrastructure and keep all interested parties whole.

Simpson’s plan is short on many details and long on aspiration. He wants to give Northwesterners the resources to create their own solutions. That approach affords a lot of flexibility but also comes with a heap of questions and limited time for answers.

No wonder none of the powerful senators and representatives from the Pacific Northwest who Simpson is counting on to help him turn the concept into legislative reality have stepped forward to put their political weight behind his idea. In fishing terms, he just hooked a 30-pound chinook in fast water. The big-shouldered brute is screaming downstream and peeling off line. Without some help, Simpson will get spooled. So far none of his congressional colleagues have grabbed a net.

“It’s obviously concerning, but it doesn’t really surprise me,” he said. “This is such an all-encompassing proposal that I think a lot of people are having a hard time getting a grasp around it. I think they want to sit back and see where the chips fall.”

Standing by or ducking for cover

Shortly after Simpson’s announcement, the four Democratic senators representing Oregon and Washington released a politically safe statement neither endorsing nor panning the idea: “All communities in the Columbia River Basin and beyond should be heard in efforts to recover the Northwest’s iconic salmon runs while ensuring economic vitality of the region.”

A month later, they’ve shown little enthusiasm for helping him land his trophy.

“This is an important regional conversation that requires careful consideration, and my focus right now is on listening to the many stakeholders and communities involved,” Sen. Patty Murray said.

Sens. Maria Cantwell, of Washington, and Ron Wyden, of Oregon, are sticking to the statement, and aides for Sen. Jeff Merkley, of Oregon, failed to respond to a request for comment.

Sen. Mike Crapo has expressed reservations but appears to be giving his fellow Republican some room to maneuver. Sen. Jim Risch and Idaho Gov. Brad Little oppose Simpson's plan. So do some of Simpson's Housemates like Russ Fulcher from Idaho’s 1st Congressional District and Cathy McMorris Rodgers and Dan Newhouse from eastern and central Washington, who have lambasted the plan.

In Idaho and eastern Washington, state and local politicians have lined up to express their dismay. So, too, have agriculture organizations like the Idaho Farm Bureau and port and shipping interests such as members of the Pacific Northwest Waterways Association, including the Port of Lewiston. Freshman Idaho state Rep. Aaron von Ehlinger even called Simpson a traitor.

Tribal leaders, Govs. Jay Inslee of Washington and Kate Brown of Oregon, and Oregon Rep. Earl Blumenauer have been more receptive. Brown said she supports the concept, and Inslee welcomed its bold thinking. Blumenauer said he is intrigued by the idea and that it deserves thoughtful consideration.

Native American tribes in the basin are largely backing the plan, including the Nez Perce Tribe and Shoshone-Bannock Tribes, of Idaho.

Shannon Wheeler, chairman of Nez Perce tribal government, said he is communicating with members of Congress, impressing upon them the mitigation in Simpson’s proposal and the urgency for action.

“If the dams stay in place, the fish outlook is very, very dire and bleak,” Wheeler said. “The transportation and the power — if the dams are breached, they are still going to survive. The agriculture and the wheat farmers, you are still going to be able to produce wheat. Those things will live on.”

But if support from tribal governments and Inslee and Brown is swaying members of Congress beyond Blumenauer, it’s yet to become obvious.

“Everybody is just really nervous right now, and you knew that would happen just because of the scope of this proposal,” Simpson said.

Joseph Bogaard, executive director of the Save Our Wild Salmon Coalition at Seattle, is urging politicians and stakeholders to view the concept as malleable.

“Salmon and fishing advocates I think view it as a really significant opportunity that isn’t perfect in the form that Mr. Simpson served up, but it’s a good framework and a good starting point, and we are reaching out to elective leaders to pick it up and seize the opportunity,” Bogaard said.

There is some quiet diplomacy happening, some behind-the-scenes engagement. Some stakeholders are providing feedback. Still others are objecting but at the same time trying to bend the proposal more to their liking.

Kurt Miller, executive director of the Northwest River Partners, said while his group doesn’t support the plan, it is still looking at ways it might be improved in case it moves forward.

“My organization and the people I represent are very interested to see how Simpson’s concept might be expanded to address state water quality standards and instream temperatures,” Miller said. “I really believe that is the next frontier of litigation.”

He would like the litigation moratorium to be longer-lasting, perhaps 50 years instead of 35.

“The decades peel off really quickly,” he said.

Will Hart, executive director of the Idaho Consumer Owned Utility Association, another group not in support of the plan, said many power interests like parts of Simpson’s concept, even if they are skeptical of it on the whole.

“There are other interesting parts of the concept, that I think a lot of power entities in the Northwest would be open to — capping fish costs at a certain amount per year, taking that responsibility off the Bonneville Power Administration and putting it on other entities, working on BPA borrowing authority and debt — those are all things we lobby and continue to work for on a regular basis, regardless of the four lower Snake River dams.”

Some are curious about the process for the plan announced a month ago. People are informally talking about it, but they aren’t sure how or if it will move, or how they can shape it.

“I ask this question whenever I talk to anybody, ‘What do you see as the next step? Where do folks go from here?’ And nobody knows,” said Paul Arrington, executive director of the Idaho Water Users Association.

Aaron Lieberman, executive director of the Idaho Outfitters and Guides Association, has the same question.

“What’s next is important,” Lieberman said. “It can shape the discussions going on right now.”

Simpson is working to convince those reluctant to engage that backing the status quo could come with a price. If nothing happens, he says the salmon wars, where lawsuits are the weapon of choice, will continue for as long as the dams are in place. Those lawsuits could bring more court-ordered constraints at the dams that would make them economically unviable and lead to their breaching without all of the mitigation he is proposing. For proof, Simpson points to the environmental groups fighting his plan because of its moratorium on lawsuits.

“This is a cottage industry they have, and they don’t want to lose that right to sue,” he said.

He also looks to dams in the Klamath Basin of Oregon and California as an example.

“They had an opportunity to reach a basinwide settlement, and Congress was unable to finalize the deal. Now, a decade later, four dams on the Klamath River in California and Oregon are in the process of being removed by 2024, and the stakeholders never received a ‘deal,’ ” Simpson wrote recently. “This is a situation I am trying to avoid.”

Congress appears to be ramping up to work on President Joe Biden’s Build Back Better infrastructure plan. Simpson sees that legislation as a vehicle for his salmon and dams plan. But if none of his colleagues steps up to help him, the moment passes and that big fish shakes the hook, he said he plans to keep fishing.

“(Oregon and California officials) had an opportunity to reach a basinwide settlement, and Congress was unable to finalize the deal. Now, a decade later, four dams on the Klamath River in California and Oregon are in the process of being removed by 2024, and the stakeholders never received a ‘deal.’ This is a situation I am trying to avoid.”