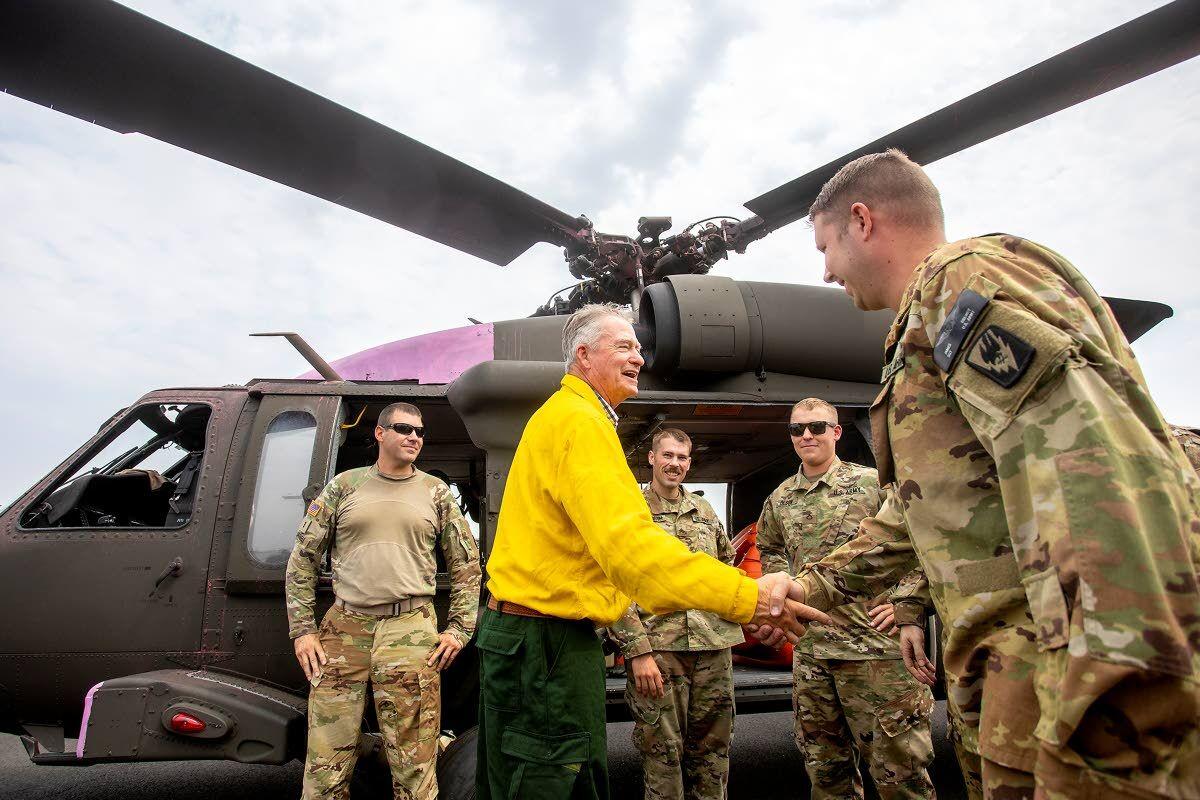 Idaho Gov. Brad Little shakes hands with an Idaho National guardsman next to one of two Black Hawk helicopters at the Hillcrest Aircraft Co. at the Lewiston-Nez Perce County Regional Airport on Tuesday. Little got a tour of wildfires in the area Tuesday morning. 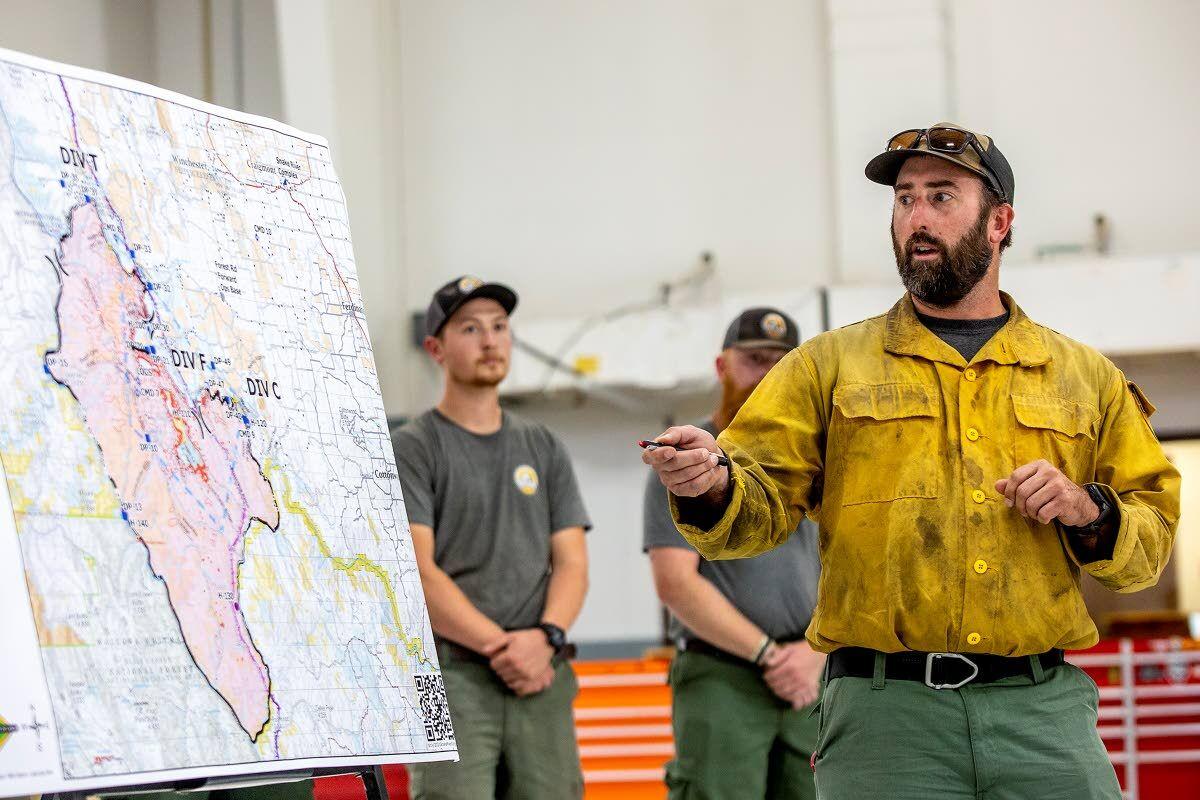 Jeremiah Miller, the incident commander on the Snake River Complex, talks about the fire Tuesday at the Hillcrest Aircraft Co. in Lewiston. 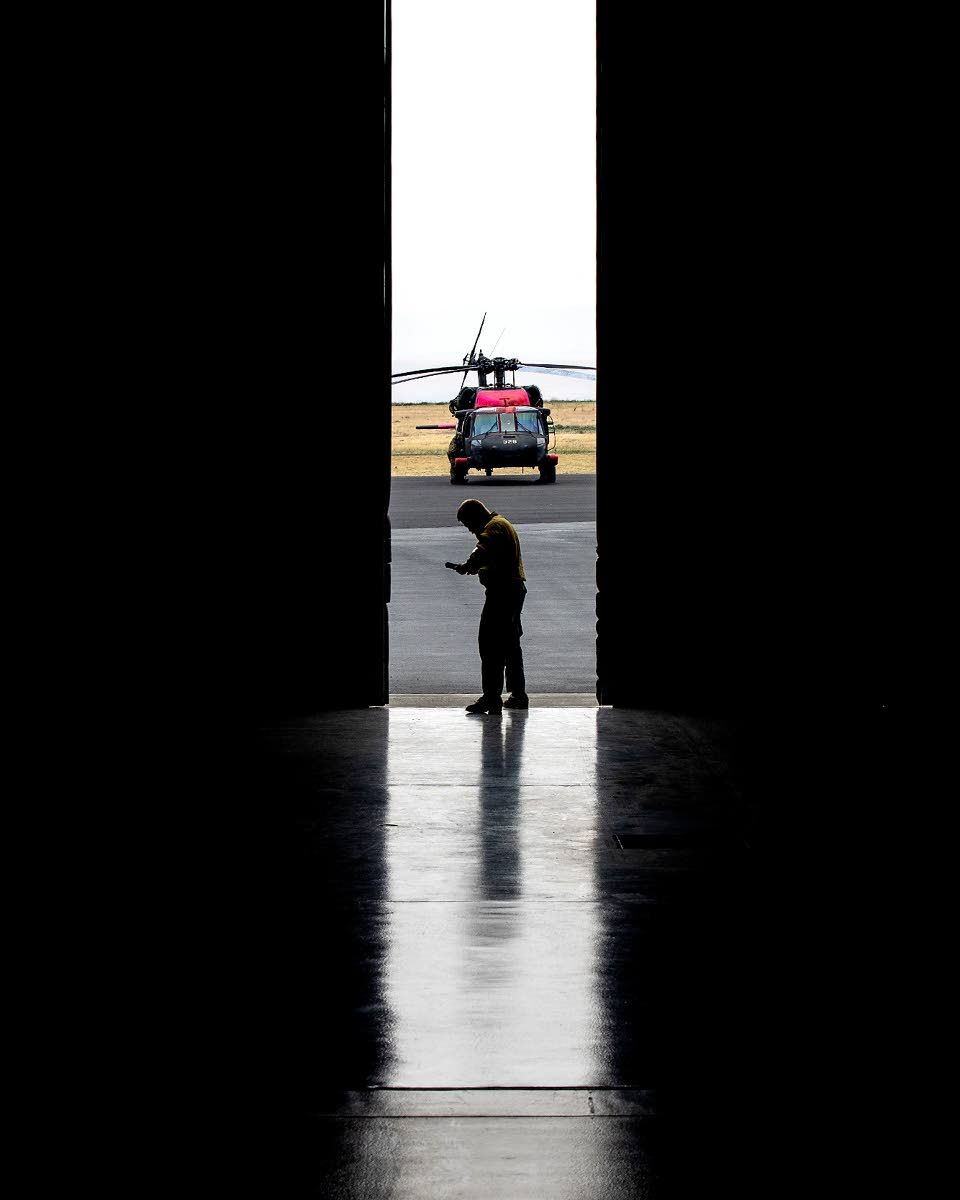 A wildland firefighter stands at the hangar doors of the Hillcrest Aircraft Co. below one of two Black Hawk helicopters that have been helping with fire efforts in Idaho, during a visit from Idaho Gov. Brad Little on Tuesday.

Idaho Gov. Brad Little shakes hands with an Idaho National guardsman next to one of two Black Hawk helicopters at the Hillcrest Aircraft Co. at the Lewiston-Nez Perce County Regional Airport on Tuesday. Little got a tour of wildfires in the area Tuesday morning.

Jeremiah Miller, the incident commander on the Snake River Complex, talks about the fire Tuesday at the Hillcrest Aircraft Co. in Lewiston.

A wildland firefighter stands at the hangar doors of the Hillcrest Aircraft Co. below one of two Black Hawk helicopters that have been helping with fire efforts in Idaho, during a visit from Idaho Gov. Brad Little on Tuesday.

When the lightning-caused fires that would become the Snake River Complex south of Lewiston roared to life earlier this month, fuels were dry, the weather was scorching hot and, like so many places in the West, the landscape was unusually receptive to flames.

“The fires made huge runs, blew out of the top of a major drainage up there called Corral Creek and then proceeded to kind of march across the top of Craig Mountain,” said Jeremiah Miller, fire warden on the Craig Mountain Area of the Idaho Department of Lands. “It’s the first time I have seen that since I have worked here in the past 15 years and the first time (anyone has seen it) since 1967 — so some pretty unprecedented fire behavior.”

Fire managers across Idaho, the Pacific Northwest and beyond are using that word frequently this year. They are seeing extreme fire behavior and a volume of fire that is without precedent. The combination is stretching firefighting personnel and equipment to the limit. Everything from aircraft to hoses is in short supply.

Idaho Gov. Brad Little noted firefighters from state, federal, tribal and local agencies always work together to fight fires and are doubling down on that effort this year. It’s late July and they have already been at it for weeks.

“It’s really important we keep all these people safe and not have too much fatigue given we are really, generally, at the start of the fire season. The end of July, the first of August is generally when we’ve had our big fires,” Little said at the Lewiston-Nez Perce County Regional Airport after touring the Snake River Complex by helicopter Tuesday morning.

“Flying over and seeing the houses, the size of the fire, it’s a testament to the hard work and dedication of everyone who has been part of the firefighting effort,” he said.

A few days before flames raced across Craig Mountain, firefighters from the Nez Perce-Clearwater National Forest were trying to hold on to a lightning-caused fire that started just outside the tiny community of Dixie.

“Air attack watched that fire start. In 10 minutes, we had heavy air resources hitting it. Within two hours, we had two interagency Hotshot crews and two heavy equipment task forces on scene,” said Cheryl Probert, supervisor of the 4-million-acre forest. “To get those folks out there so quickly is a real testament to how we work across boundaries.”

But the dry fuels and sheer number of fires meant they couldn’t catch them all. Probert noted in the first two weeks of July, there were 140 fire starts in north central Idaho. About half of them started from the same series of lightning storms. Some like the Dixie Fire and Snake River Complex evaded initial efforts and grew large.

Probert said firefighting managers from a mix of agencies coordinated to send people and equipment to fires that most threatened communities.

“We operate across jurisdiction lines and we move resources that have the highest values at risk.”

That meant many Forest Service crews were dispatched to battle blazes on state or private land like Snake River Complex that was threatening homes at Waha, the Too Kush 2 Fire near Kooskia and the Dixie Fire bearing down on the tiny communities of Comstock and Dixie.

While they amassed resources to protect homes and private property on those fires, dozens of others burning in remote areas went largely unattended. But that is changing.

Probert was recently able to secure one of just four National Incident Management Organization, or NIMO, teams to help with those remote fires and assist her forest logistically support fire management efforts across the forest.

“We needed help with the backcountry fires and needed somebody to focus on those while our initial attack resources were focused on the front country and our communities with our partners,” she said.

The team headed by Jay Kurth is working on the Storm Theatre Complex, which includes the Storm Fire southeast of U.S. Highway 12 near Lolo Pass and nearly two dozen fires burning in the upper reaches of the North Fork of the Clearwater River drainage.

The seven-person team is identifying things like campgrounds, fire lookout towers, pack bridges, outfitter cabins, work centers and cabins that may be threatened by the flames. In some cases, they will set up sprinkler systems to saturate the areas. In others, they will wrap buildings with fire-resistant foil to ward off the flames.

“We prioritize those values in terms of where we want to make investments to defend those values,” Kurth said. “That is called point protection.”

Probert said the team means more of her people can focus on fighting fires near communities and be prepared to pounce on new starts.

“We are keeping our resources where they can be available for initial attack and extended attack in those priority areas where we have communities and homes and private property and private timber land.”

During his Lewiston appearance, Little said the public can support the effort by being extra vigilant when they work or play outdoors.

“Your favorite hunting, camping, or fishing spot could be at risk if we have another big outbreak of fires,” he said. “I know that this time of year people want to be outdoors, but please think of the potential consequences of unwanted human-caused fires. Fires can endanger the lives of firefighters and endanger communities.”

Kurth and Probert said people who do head to the mountains should educate themselves on nearby fires and be prepared to leave quickly.

“There could be fire anywhere and everywhere,” Probert said. “It is moving fast and fire behavior is extreme.”