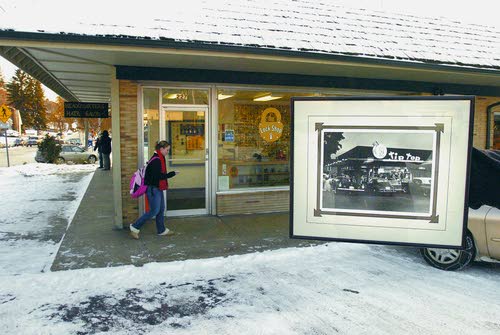 ABOVE: The Lock Shop and Headquarters Hair Salon are now in the space once occupied by the Tip Top Cafe in Moscow. The murder of waiter Janice Lynn Foiles on Dec. 28, 1969, at the small-town eatery is still unsolved.Tribune/Kyle MillsLEFT: Foiles’ gravestone in the Moscow Cemetery. 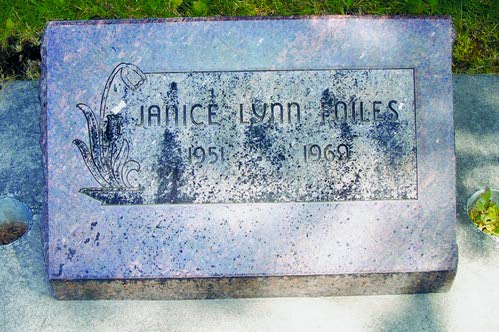 Foiles' gravestone in the Moscow Cemetery.

ABOVE: The Lock Shop and Headquarters Hair Salon are now in the space once occupied by the Tip Top Cafe in Moscow. The murder of waiter Janice Lynn Foiles on Dec. 28, 1969, at the small-town eatery is still unsolved.Tribune/Kyle MillsLEFT: Foiles’ gravestone in the Moscow Cemetery.

Foiles' gravestone in the Moscow Cemetery.

MOSCOW - The Tip Top Cafe was a typical small-town eatery in late 1969, with both sit-down and drive-in menus served by waitresses and carhops.

And then, during the Sunday evening of Dec. 28, after all the customers had left and 18-year-old waitress Janice Lynn Foiles was preparing to close, a yet-to-be-explained tragedy struck. Foiles, a Moscow High School graduate and freshman at the University of Idaho, was found bludgeoned to death behind the cafe counter.

"We believe this is an isolated incident," Moscow Police Sgt. Dave Williams told news media after the killing. "It does not seem to be the work of a psychopath."

One month later, Moscow Police Capt. Robert Means was quoted in news stories as saying, "Our investigation has turned up several productive leads. We believe we're narrowing the field."

This year will mark 45 years since Foiles died, and while the case is not closed, police still have no suspects and it remains inactive.

The Tip Top Cafe, located in what is now the Post Office Square Shopping Center at the corner of Third and Jefferson streets, went out of business decades ago. In its place, The Lock Shop and Headquarters Hair Salon continue to operate on opposite sides of a wall that divides what used to be the cafe.

On that wall, a black-and-white photo of what the Tip Top Cafe once looked like hangs in The Lock Shop next to rows of uncut keys.

"I think just behind this wall is where the counter would have been," Gary Crabtree, owner of The Lock Shop, said in 2008. "Where the hairdresser is now."

Crabtree recently said the shop's previous owner, Jeff Beckett, was the one who told him most of what he knows about the Foiles case.

"Everything I know is at best third- or fourth-hand (information), if not more so," Crabtree said.

Headquarters owner Toni Latham has worked at the salon in its current location for almost nine years, and in that time she has heard a few customers mention the case. It's not an everyday - or even weekly - occurrence, but it's a story she's heard several times over the years.

"Occasionally, some of our elderly clients will remember back to when it was the Tip Top and they'll mention that case," Latham said.

Latham said all she really knows about the case is a waitress was at the restaurant alone one night, "something about a hammer," and the girl being bludgeoned to death.

Police say a claw hammer was most likely the murder weapon. Such a hammer, with one claw missing, was reportedly kept behind the cafe counter and used for small repairs.

"And that (the hammer) came up missing and was never found," said former Moscow Police Chief Dan Weaver, who worked as a reserve for the department in 1969. "So it was assumed by investigators that that could have been the instrument used."

The day of the murder had apparently been a slow one at the Tip Top, with students home on holiday break and people getting ready to celebrate New Year's later in the week. Foiles, according to newspaper accounts at the time, was said to have been found clutching the day's receipts in her hand - a total of $17.

"Looking at the crime scene photos," Lt. Dave Lehmitz said after reviewing the case file in 2008, "it would appear that obviously robbery or some kind of sexual assault was not the motive. So that would more than likely lead you to believe it was a crime of passion. Obviously, with the multiple blows, too, there's some rage involved."

Perhaps the work of a spurned boyfriend?

But none rose to the level of suspect.

If the killer was a peer, he or she would now be more than 60 years old.

"It makes you hope that maybe, on their death bed or something, they'll confess," said Weaver, who retired in 2010. "Things like that have happened in the past."

Foiles, who was born in Coeur d'Alene, spent two of her high school years in Boise and her last two at Moscow High School. Her picture is in the "Bear Tracks" school yearbook, arranged alphabetically among her classmates and annotated with credit for being a member of the French and Pep clubs, as well as active in American Field Service, the school's foreign exchange program.

"Janice had always been a quiet girl, never taking much part in school activities or dating," her father, Marvin Foiles, was quoted as saying in a newspaper story almost two months after his daughter's death. "She was just beginning to come out of her shell and have fun in her life when this happened."

Marvin Foiles and Randall Foiles, Janice's brother, found her at the Tip Top. When she failed to come home on that Sunday night, they eventually went looking. Their discovery, around 3:30 the next morning, was at least six hours after the crime, according to police reports.

Around 8:40 on the night of the murder, a Moscow police officer making routine rounds noted that lights were still on at the Tip Top, according to press accounts at the time. But that wasn't unusual for closing time, and he didn't check.

"The lights were on and they believe she was in the process of closing," Lehmitz said, "because it looked like, at least it appeared she was counting the till out."

Crabtree said police over the years would come into his lock shop to look at that old picture and ask a few questions. He was told once that every time a new detective was hired, they'd be asked to look into some of the unsolved cases.

"But it's been a long time since that's happened," he said, adding he doesn't think much more will come of the case.

A similar sentiment was expressed by Marvin Foiles - who is now deceased - at the time of his daughter's death.

"I don't suppose we'll ever get over it," he said.

Janice Foiles' mother, Carma Foiles, all but confirmed her late husband's prediction when asked about it in 2008. She did not provide further comment at the time, saying she and other family members have tried to move on.

As for the investigation, police say Janice Foiles' murder has never been and never will be permanently shelved, until and if it's solved.

"All our cold cases have been looked at by other agencies, including state and federal," Lehmitz said in 2008. "This one as well."

More than 15 years ago, police reinvigorated the case by publicly disclosing the murder weapon may have been a claw hammer.

"And, of course, people were bringing in claw hammers from all over," Weaver recalled.

None proved to be the missing and suspected hammer. There haven't been any new ones brought to police in quite some time, either.

"If someone brought one in, we would still look at it and still test it," Fry said.

If the truth be known, Lehmitz said, police know more about the case than they're willing to disclose. For example, he said, the crime scene hasn't been really described.

"That's a piece you hold back, in case a person wants to confess, you want to be able to corroborate their confession with what was at the scene," Lehmitz said.

In Fry's mind, there would be nothing better than being able to close out this case - and others like it - to provide the family with some answers and bring someone to justice. He said police would love it if someone with information who was maybe too scared to come to them at the time would come in now.

"A lot of these cases, that's what it comes down to - you've got to get that one tip that gives you the information to follow up on," he said.