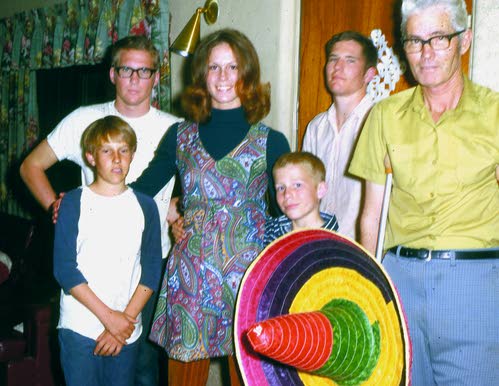 ABOVE: In April 1971, three months before her murder, Joyce LePage poses with (from left) cousin David, brother Bruce, brother David, brother Steve and their father, Walter LePage. Bruce had just dropped out of college to run the farm while Walter recovered from a broken kneecap.photo courtesy Bruce LepageRIGHT: LePage’s dead body was found wrapped in a carpet stolen from Stevens Hall at WSU.Tribune/David Johnson 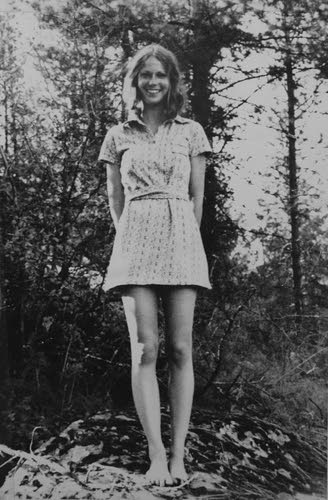 ABOVE: Joyce LePage as a student at Washington State University. 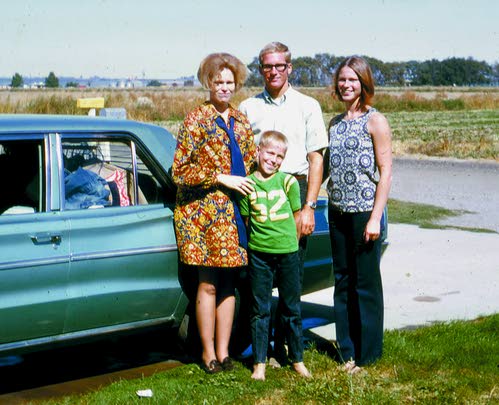 Joyce LePage (blue top) with her sister Phyllis and brothers Bruce and David (green shirt) in 1971 after Joyce packed her car to return to WSU. 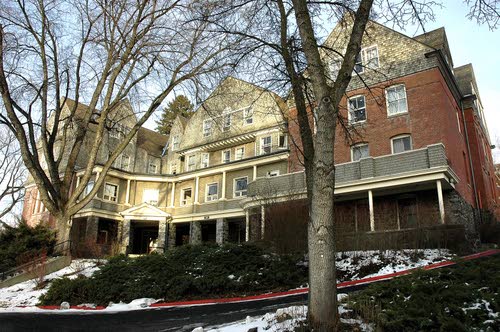 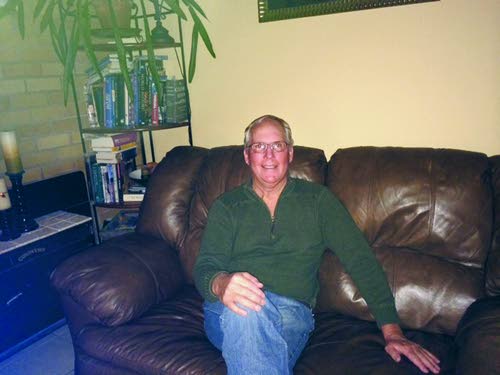 photo courtesy Bruce LepageJoyce’s younger brother Bruce, in a recent photograph. Now retired from farming near Pasco, he has assumed the burden of keeping the case alive from his father.

ABOVE: In April 1971, three months before her murder, Joyce LePage poses with (from left) cousin David, brother Bruce, brother David, brother Steve and their father, Walter LePage. Bruce had just dropped out of college to run the farm while Walter recovered from a broken kneecap.photo courtesy Bruce LepageRIGHT: LePage’s dead body was found wrapped in a carpet stolen from Stevens Hall at WSU.Tribune/David Johnson

ABOVE: Joyce LePage as a student at Washington State University.

Joyce LePage (blue top) with her sister Phyllis and brothers Bruce and David (green shirt) in 1971 after Joyce packed her car to return to WSU.

photo courtesy Bruce LepageJoyce’s younger brother Bruce, in a recent photograph. Now retired from farming near Pasco, he has assumed the burden of keeping the case alive from his father.

PULLMAN - It's been almost 43 years since Bruce LePage's sister was murdered, but he still has difficulty talking about her.

Joyce LePage was a 21-year-old Washington State University student when she disappeared in the summer of 1971. Her decayed body was found nine months later, wrapped in a carpet and dumped in a ravine south of Pullman.

Had she not been killed, she could have lived her life three times over by now. She would have been 64, two-and-a-half years older than Bruce.

"She was a very friendly, outgoing girl," said LePage, who retired several years ago after farming his family's land near Pasco. "She was a profuse writer. If she were still around, I think she'd have been a high school or college English professor."

There's some question about where exactly Joyce died, but the carpet she was wrapped in came from the Stevens Hall women's dormitory. The assumption is that's where she was killed.

WSU officials say this is the only homicide - solved or unsolved - to have taken place on the Pullman campus. The search for her killer is the oldest active cold case for the university police, as well as the Whitman County Sheriff's Office. It's been handed down from one generation of investigators to the next - and now, thanks in part to her brother's efforts, it's been taken up by a third.

When his father was alive, Bruce deferred to him, letting him decide how hard to push the investigation. After he died three years ago, though, Bruce felt the burden passed to him - and if whoever killed Joyce is still out there, he wants them found.

"I wouldn't be doing my sister right if we didn't take another look at all the persons of interest and eliminate them to the best of our ability," LePage said.

Joyce LePage was last seen the evening of July 22, 1971. Friends dropped her at her off-campus apartment around 10 p.m. She was expected home in Pasco that weekend for a visit.

"The Tri-City Water Follies (boat races) were being held that weekend," LePage said. "Joyce intended to come home for that. She also had a skydiving lesson scheduled in Moscow that Saturday, but never showed up."

On July 23, a Friday, a carpet was reported missing from Stevens Hall. It isn't clear how long investigators took to connect the two. Joyce wasn't officially reported missing for 10 days, and it was some time after that before police learned she liked to frequent the residence hall.

The dormitory, originally constructed in 1895, is one of the oldest buildings on campus. It was being renovated that summer. She liked sneaking in to study and write and sometimes spent the night.

LePage said his sister was in Pullman that summer to take a few courses. She'd recently completed her junior year and wanted to make sure she had enough credits to graduate the coming year.

Joyce was the second of the five LePage kids to attend WSU, he said. Her older sister earned a business administration degree there. Bruce started as a freshman in the fall of 1970.

"We have a lot of family history in that area," he said. "My mother was raised on campus. Her father taught accounting there. We all attended WSU, except for my youngest brother. For Joyce, it was like a home to her."

Bruce dropped out of school in March of '71, after his father was injured in a farming accident. The family raised wheat and clover and had a seed cleaning and processing facility. He worked there, then took a job on another farm near Yakima that summer. When Joyce went missing, he quit and came home.

The family was so busy with farming and the seed business, they hardly had time to deal with the issue, he said. They left it in the hands of police. As time went on, it became obvious that something bad had happened.

"There were no dynamics at home that would have kept her from checking in," LePage said.

A Moscow High School student hunting for garnets discovered Joyce's skeletal remains in Wawawai Canyon in April of '72. That helped the family find some sense of closure.

"That was way better than not finding the body," LePage said. "We were able to have a funeral, and friends could come and mourn."

Sheriff Myers first read about Joyce's murder years ago, while working his way up in the department. After Bruce contacted him in 2012, he began devoting time and resources to the case.

While he thinks the initial investigators did a competent job, Myers said if the murder happened today, it would probably be solved and solved quickly.

That's largely due to improved technology, he said. Students in 1971 didn't walk around with cellphones. There may not have been a single telephone in an entire dormitory, and there probably weren't security cameras in any retail stores. Investigators also didn't know anything about DNA, so physical evidence wasn't necessarily stored in a way that facilitated future analysis.

The delay before Joyce was reported missing - and the much longer delay before her body was found - added to the complexity of the case, Myers said. It led to a multijurisdictional investigation, with WSU police initially looking for a stolen carpet, Pullman police investigating a missing person, and the sheriff's office getting involved after the body was found in the county's jurisdiction.

"That makes it difficult to piece together (today) what WSU did, what Whitman County did," Myers said.

The FBI was called in to help identify the remains and to determine a cause of death. Analysts found bone markings consistent with knife wounds, so the belief is that she was stabbed to death.

"It may have been a homicide or an accidental death that was covered up, but the FBI analysis suggests it was murder," Myers said. "Certainly someone had knowledge of her death."

As a first step in pursuing the cold case, he and Officer Olmstead at WSU put together a comprehensive case file, making sure they both had copies of all the available investigative documents and narratives. Then they came up with ideas on how to proceed.

"Part of the process is just going through and making sure each person who had access, means and a possible motivation - if they're still alive - at least gets interviewed and polygraphed one last time," Myers said. "That's the least we can do for the family."

One of the biggest steps forward in the case, for example, came in December when a major suspect spoke with investigators and passed a polygraph exam.

"He was interviewed immediately after Joyce disappeared and again after the body was found, but he'd never taken a polygraph," Myers said. "He hadn't been contacted again since about 1972. We met with him and said here's how he could help. He was very cooperative and passed a polygraph. I'm confident at this point that we can focus on other avenues. That's a big change in the investigation in terms of our focus."

Myers also sent some physical evidence to the Washington State Crime Lab, which had never been done before. He's hoping something will turn up, although after more than 40 years he realizes the chances are slim.

Over the years, some investigators thought Joyce might be an unconfirmed victim of serial killer Ted Bundy, in part because he was known to be in the Pacific Northwest at that time and because Joyce was attractive and physically similar to his other victims.

That remains a possibility, but Myers said Bundy is more likely a side issue, someone investigators looked at when other leads went cold.

"There's no real evidence he was involved or in the area," he said. "It seems like any time someone was caught murdering someone on a college campus, investigators looked to see if they'd been in Pullman. There's always a chance that it was a complete stranger, but more than likely it was someone who was close and in her circle of friends. The vast majority of people who are murdered are killed by someone who knows them and who has access to them."

Attempts are now being made to contact some of the other individuals who were in Joyce's circle of friends.

"It would be nice to bring this to a logical conclusion and hold someone responsible," said Olmstead, who inherited the LePage case after WSU Sgt. Don Maupin retired several years ago. "I think that's the ultimate goal for the LePage family and for all the officers who investigated this over the years. My worst fear is what if we were never even close? What if it was someone who slipped through the cracks, who was never identified or interviewed by the early investigators?"

After nearly 43 years, LePage said he understands the difficulty of even identifying Joyce's killer, much less bringing them to justice.

"If we can weed the list down and show that someone did or didn't do it, I'm good with that," he said. "But it would be nice to have justice. Joyce had a great future ahead of her. Her life was cut off too soon."