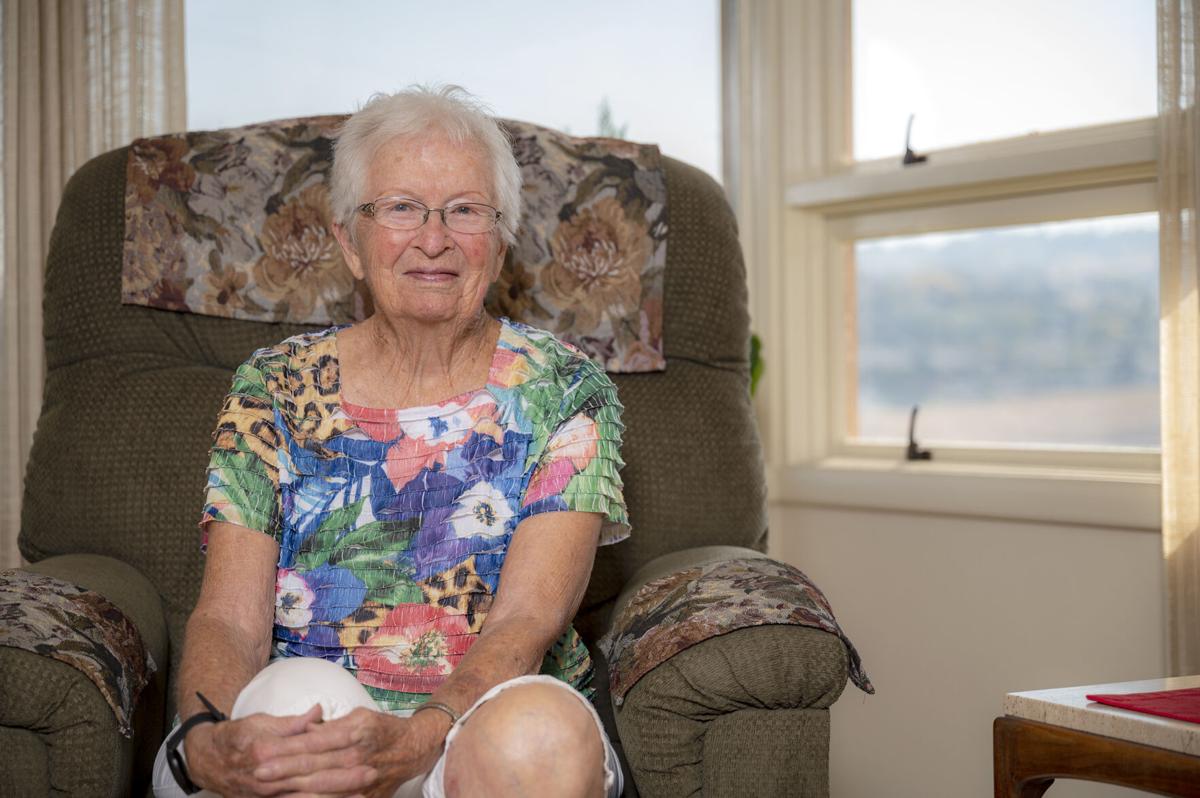 Louise LaVoie poses last month for a photo in the living room of her home in Clarkston. 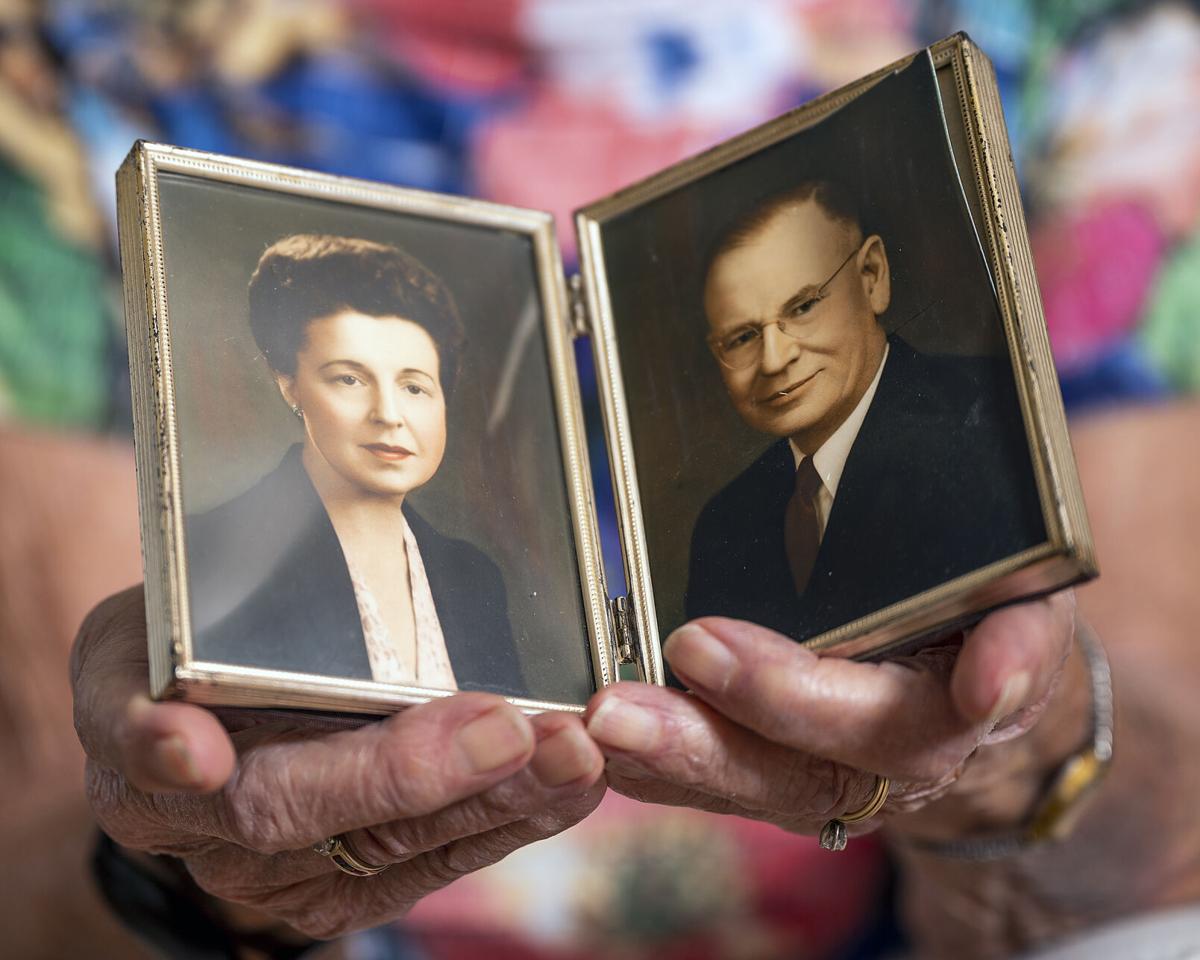 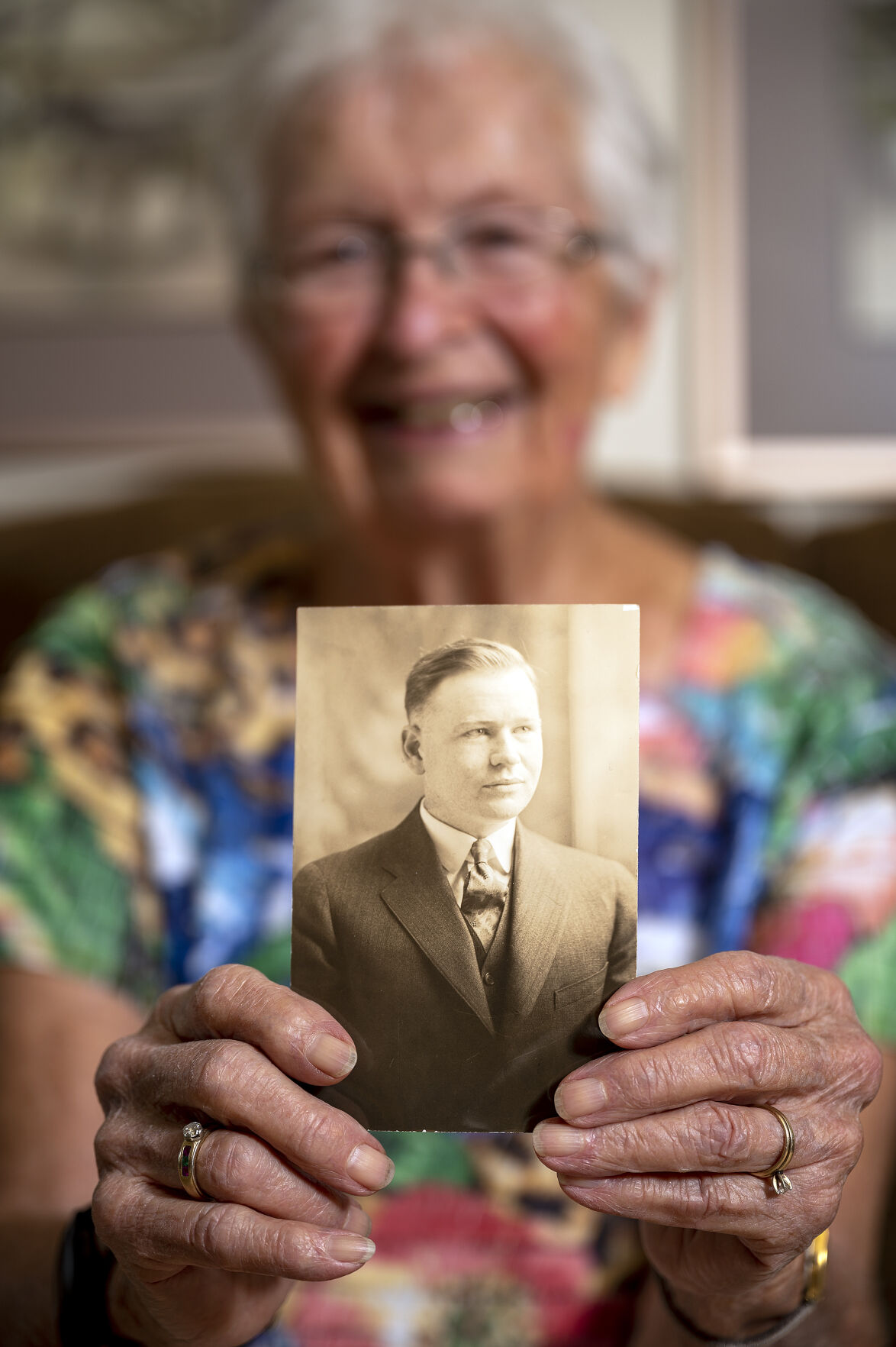 Louise LaVoie holds up a picture of her father last month while sitting in the living room of her home in Clarkston.

Louise LaVoie poses last month for a photo in the living room of her home in Clarkston.

Louise LaVoie holds up a picture of her father last month while sitting in the living room of her home in Clarkston.

Writers connect us. They connect us to the fabric of a community, and they can bring us closer than we realize to each other. And writing is what interweaves Louise LaVoie’s life stories of more than a century of the Lewiston-Clarkston Valley, through her family, friends, columns, letters and good deeds.

LaVoie’s memory of her 95 years may be a little fuzzy now, but fortunately she wrote a lot of things down, and she collected her father’s priceless letters from his days in Texas — training fighter pilots for the Great War, World War I — before he would come here to start Largent’s Appliance in downtown Lewiston.

Her family’s story connects the community, binds it together and shows how people can make a difference locally just by doing.

LaVoie’s father, Ralph Largent, was from Montana originally. With his military experience and a University of Idaho degree in animal husbandry, he came to Lewiston in 1920 and landed a job at the Mutual Creamery on the 1100 block of Main Street.

LaVoie describes the creamery business as a place that made ice that its workers loaded onto trains headed east with produce that needed to stay chilled. She remembers a room so big they built an airplane in it.

Largent wanted to move up the company ladder quickly and threatened in a letter to leave if he didn’t, she said. He started selling appliances at the creamery in 1921, then decided to set out on his own. He opened an appliance business along the 600 block of Main Street next to the Liberty Theater, where it remained until the 1940s.

LaVoie came along in 1925, and she spent a lot of time at the store. It was simply named the Appliance Center then. Later he saw fit to put his name on the business known today as Largent’s Inc., at 718 Main St. in Lewiston. The business has since expanded to Pullman. The stores offer refrigerators, dishwashers, ovens, washers, dryers, small appliances and outdoor appliances, as well as service and parts, delivery and installation. It’s still in the family, now run by three of LaVoie’s six sons.

LaVoie and her husband, George, took over the business when Largent died in the 1950s. Her sons took the reins when George LaVoie retired in 1989. He died in 2014.

LaVoie remembers her father as an innovator. “He brought refrigeration to the valley,” she said. He sold refrigeration units for the home when nobody had that sort of thing here. He also came up with the idea of renting cold-storage space in the 1920s in the area. His frozen food lockers were some of the first in the nation.

The first washer they had was bolted to the floor, and homemakers would come into the store to watch the clothes spin through the tiny window. After the appliances sold, LaVoie would go to their homes to demonstrate how they worked.

Beyond her store duties, she studied nursing at St. Luke’s in Spokane for three years after graduating high school in 1943. She especially enjoyed the training she received in the psychiatric ward. The subject still fascinates her today. While in Spokane, she wrote many letters home. A local author is turning the collection into a book titled “Dear Mom.”

LaVoie went to Chicago for a postgraduate course, then returned to the Lewiston-Clarkston Valley to work for St. Joseph’s Hospital (now St. Joseph Regional Medical Center), a job she held until her marriage.

She began dating George on Labor Day in 1947. They were married the following January. He began working at Largent’s in 1949. Together, they raised Craig, Steve, Dean, Mark, Kent and Dale. Craig, Steve and Kent remain in the valley, running the family business. Dean, Mark and Dale all live in Spokane and get together often, she says, which makes her very happy.

Craig began doing odd jobs at Largent’s when he was about 12 and started officially working there a day after he graduated from high school.

In addition to nursing, mothering and appliance sales, LaVoie wrote for the Clarkston Herald for 11 years in the 1970s and ’80s. She wrote two columns. “Gleanings” gave her the chance to share old historical pieces from area newspapers from the 19th Century. But her work on the column “Inkmarks” is where she showcased the community, its people, their emotions, their triumphs, their struggles. Through the column, she tells a lot about herself.

“I can choose to ponder all the unfinished ends in this world — or the signs of completion,” she wrote in “A Conversation with Mom” from “Inkmarks.” “I choose the latter, as I operate better when I am encouraged.”

She turned the columns into a book, “Louise’s Inkmarks: Writings from 1979.”

“I see God as present everywhere and taking an active part in my life. On occasions too numerous to count, I have gotten glimpses of Him,” she writes in her book. “These stories reflect some of the experiences in which I have gotten to know Him. My prayers shared here are very precious moments in my inner life. I choose to add these to my writings as they may have special meaning for someone else.”

LaVoie also organized her father’s letters, including some from when he trained fighter pilots, into a book — priceless work that she recently loaned to Gary Peters at the Lewiston-Nez Perce County Regional Airport. Peters had her father’s flying helmet of reinforced leather, and his WWI uniform and the letters, on exhibit at his hangar.

“The letters are unbelievable,” he said. “I think the work he did actually laid the foundation for all of the tail-wheel training throughout the war and World War II and what we still used today.”

The letters take the reader back to a time when pilots wore leather helmets and goggles, flying in the open-air cockpits of their biplanes. They’re written in cursive to family members, and they give a snapshot of fighter pilot training in WWI.

“If I would tell you of all the crashes here, you would think it a very dangerous place,” Ralph Largent wrote in a letter to his brother. It’s penned on YMCA stationary, with a U.S. flag in the top left corner. “But as a matter of fact, 95 percent of them leaves the pilots almost unhurt.”

Heeding the advice printed on the bottom of the stationary that reads “Help your country by saving. Write on both sides of this paper,” he captured a history.

LaVoie remembers from the letters that her father was preparing to ship overseas for the war, but the war ended 10 days later. She thought of his good fortune, because pilots were being killed in WWI at an alarming rate.

Later on, LaVoie and her husband traveled with Elderhostel (now called Road Scholar) groups for seniors, visiting Russia, Germany, Italy, Africa, Central America, Hawaii and Tasmania. They started the trips in the mid-’70s and continued until 2000. She describes Elderhostel service as leaving you with “no concerns at all and a safe way for seniors to travel the world.”

When she wasn’t traveling the world, LaVoie was in the Lewiston-Clarkston Valley, making a difference in people’s lives. She volunteered with Meals on Wheels for 30 years, delivering food to homebound people. She would sit and chat, she said, which makes a great deal of difference in the life of someone who doesn’t get out a lot and may not have many or anyone to talk to.

She worked to raise money to fight multiple sclerosis and is an avid birder. She walks a mile each day and keeps an eye out for birds and a neighborhood horse on her walks and from her window, which overlooks the Snake River from the Clarkston side.

She sees a lot of stories yet to be written while on her walks. She’s sure there’s an interesting story about that horse.