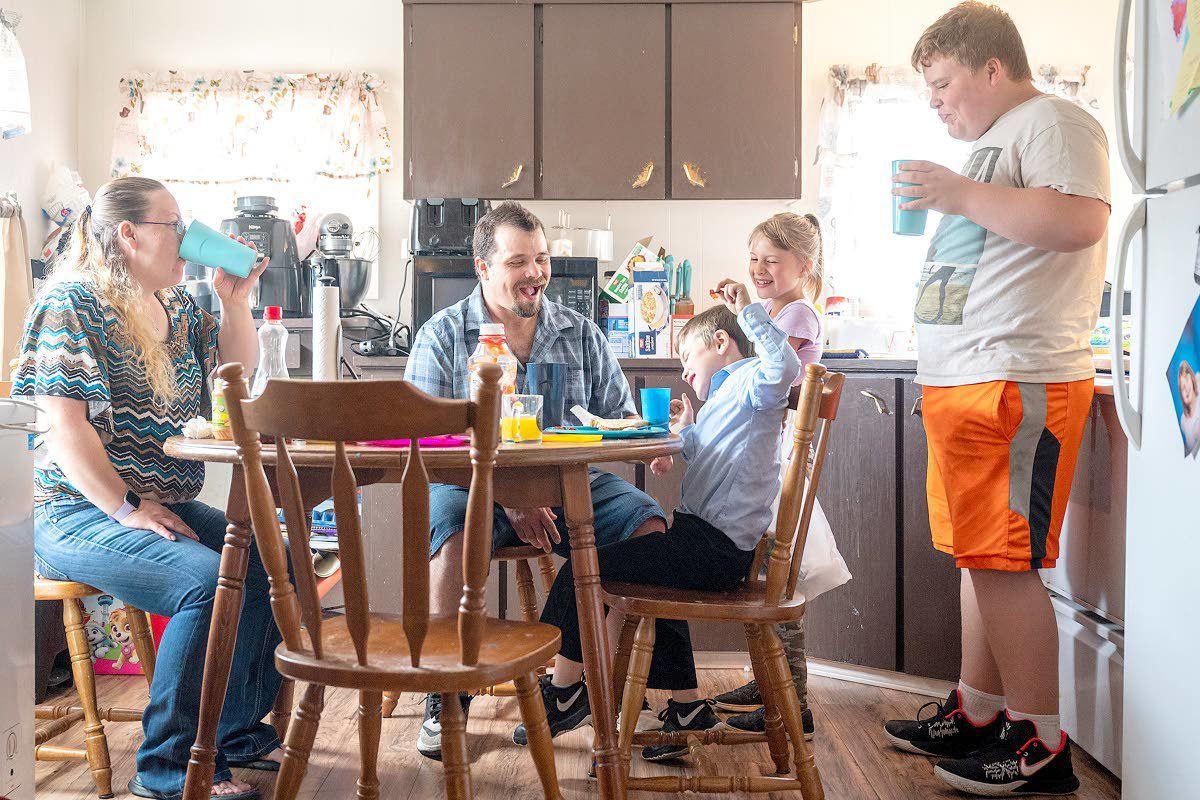 The Brotherton family enjoys a celebratory breakfast together on Friday morning at their home in the Lewiston Orchards. Kevin Brotherton (center-left), who was celebrating his 35th birthday, wins a staring contest with his 6-year-old son, Kevin Brotherton II, as his daughter Navaeh, 8, his son Harley McNish, 13, and his wife, Sunshine, all look on and laugh. Kevin Brotherton was temporarily furloughed from his job at Renaissance Marine Group in Clarkston and is seeking unemployment benefits. 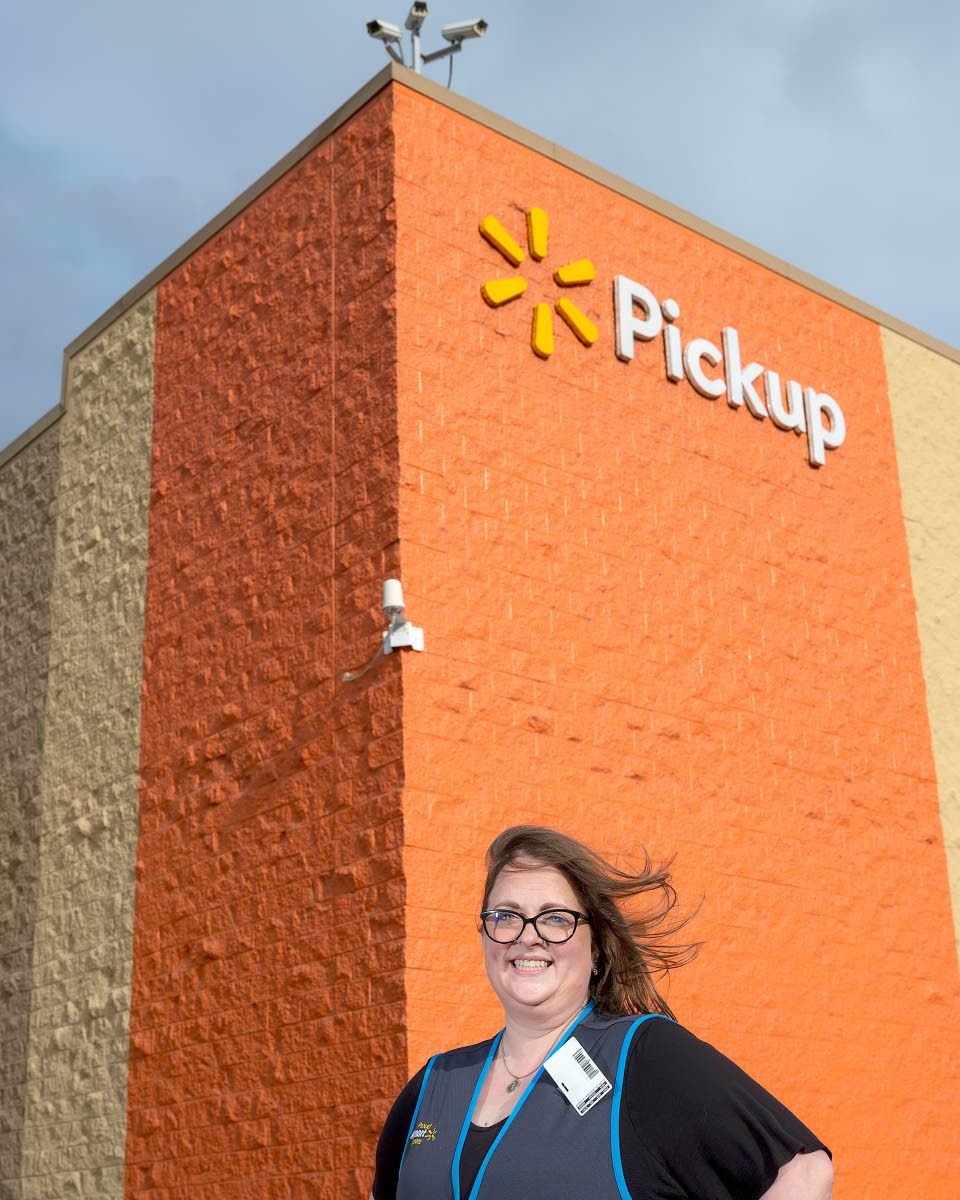 Walmart employee Molly Lewis poses for a portrait outside the pickup window at the Clarkston Superstore on Thursday morning. 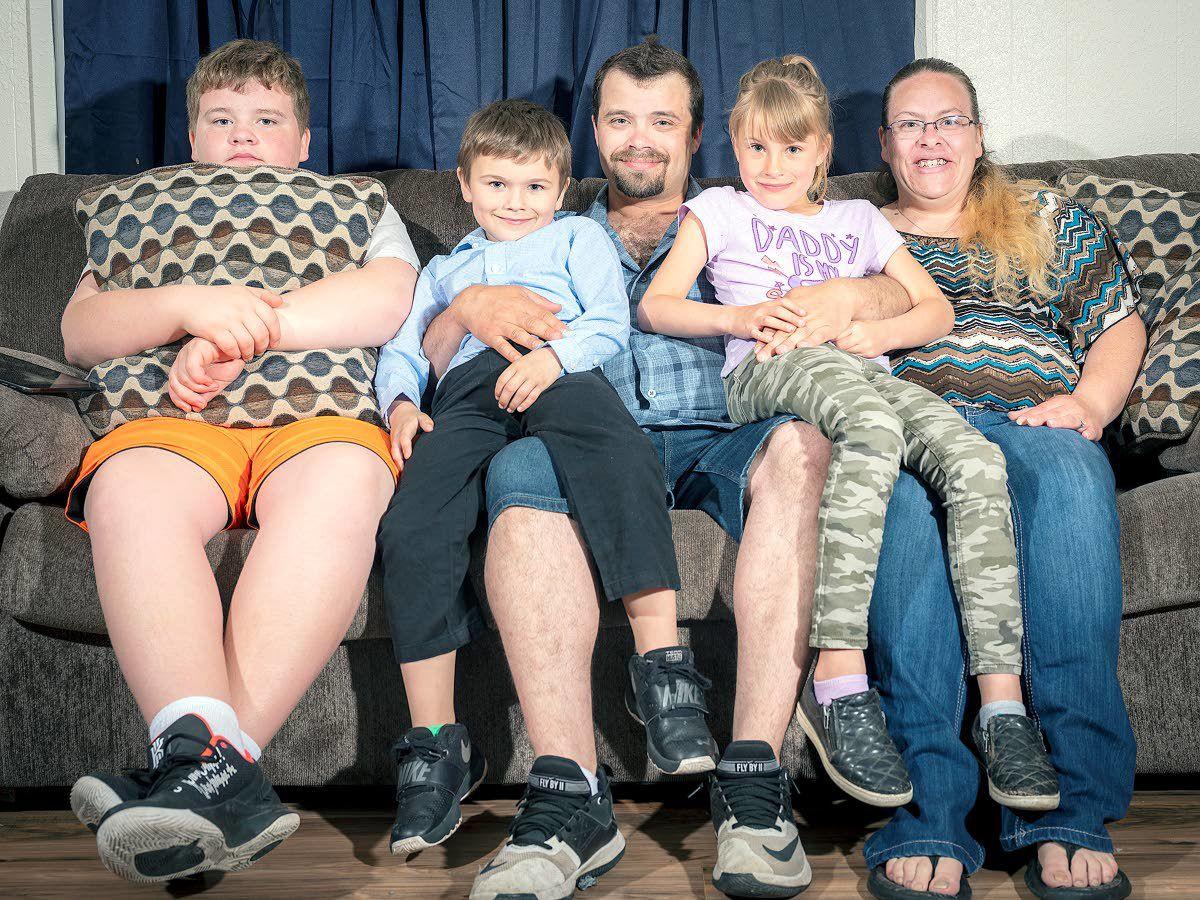 The Brotherton family enjoys a celebratory breakfast together on Friday morning at their home in the Lewiston Orchards. Kevin Brotherton (center-left), who was celebrating his 35th birthday, wins a staring contest with his 6-year-old son, Kevin Brotherton II, as his daughter Navaeh, 8, his son Harley McNish, 13, and his wife, Sunshine, all look on and laugh. Kevin Brotherton was temporarily furloughed from his job at Renaissance Marine Group in Clarkston and is seeking unemployment benefits.

Walmart employee Molly Lewis poses for a portrait outside the pickup window at the Clarkston Superstore on Thursday morning.

Molly Lewis gets her temperature checked before every one of her shifts at Walmart. Then she puts on a face mask.

Following the new routine is just one of the changes imposed on Lewis by the spread of coronavirus in the region.

A cosmetologist who has had a stable career for 20 years, the single mom unexpectedly lost her job as a manager of the SmartStyle Hair Salon inside Walmart when Washington Gov. Jay Inslee issued a proclamation that temporarily closed her business and many others to protect the public from COVID-19.

She went to work on a Monday to remove personal items from her station and let five other stylists know they too were out of work starting the next day.

“It kind of felt permanent,” she said. “It was scary not knowing where that next paycheck was coming from.”

So far, she’s avoided her worst fears. She left her telephone number with the Walmart staff and told them she was open to accepting any position as she tied up loose ends with the salon. Within a week, she was hired to help fill orders Walmart customers submit online.

“I (am) really thankful for this job,” Lewis said.

The job losses that Lewis and thousands of others in the region have experienced so far have been among the most immediate, widespread and painful consequences of the coronavirus.

More than 5,500 people in north central Idaho and southeastern Washington have filed for first-time unemployment benefits since mid-March.

That significant setback has been balanced some by the continuing strength of the region’s manufacturing sector, fueled in part by demand for toilet paper and ammunition.

Health care providers are among those hit hardest. The majority of the region’s hospitals have made budget cuts because they have had to postpone most elective procedures to have staff and supplies available to treat coronavirus patients.

Recreational boat builders, hair salons, fitness centers and bars in Washington closed temporarily because they are not considered essential businesses. Volume has dropped at hotels and restaurants as travelers canceled plans.

Those changes deprived Lewis, and others in a variety of jobs, of money they needed to buy food and pay mortgages.

She is likely one of the exceptions in finding a way to replace a significant portion of her income so quickly.

Similar to Lewis, Mike Dodson had been steadily employed in the same field since he was a teenager when his job as a line cook at Jollymore’s A Dining Experience ended.

Dodson hasn’t reported to a job in four weeks, the longest disruption in his career.

Kevin Brotherton, a husband with three children, was just getting his feet back on the ground after being incarcerated when he was temporarily furloughed from a job at Renaissance Marine Group in Clarkston. Both men are now seeking unemployment benefits.

Dodson wasn’t entirely surprised when he lost his job. Even before Gov. Brad Little’s stay-home order required Jollymore’s to shift to a takeout menu, crowds in the dining room had thinned.

“I hope it blows over and we can go back to work,” he said.

“I just love it when I get a nice compliment from the guests that the food was great,” Dodson said.

He worries about the future, vacillating between thinking restaurants will be packed when restrictions lift because people are eager to socialize or deserted because individuals will be concerned they might get sick.

“I’m not sure what to think right now,” he said.

Getting rehired isn’t the only option he’s considering. He wonders if his employment would be less vulnerable in another field and is thinking about going back to school to train as an electrician or a welder.

In his newly abundant spare time, he plays video games like Doom and has been watching the series “Ozark” on Netflix.

He’s done yard work for an aunt who is older, but even that doesn’t feel normal. He checks his temperature before he goes to be sure he isn’t sick.

“I’m going a little stir crazy finding stuff to do,” Dodson said. “It’s too weird out there.”

Brotherton is experiencing different kinds of pressures. He was making big strides after serving prison time for his part in the theft of $300 from a safe at Lewiston’s Jack in the Box, where he was an employee.

He had landed an entry-level job in January sanding welded aluminum boats before they are painted at Renaissance Marine Group in Clarkston.

“If you put the time in there, they treat you right,” Brotherton said.

But he can’t get unemployment benefits yet, because he didn’t have enough hours in when Renaissance Marine temporarily shut down.

The federal stimulus package is supposed to help people like him, but that money might not be available until he returns to work.

That leaves the wages of his wife, Sunshine Brotherton, as the only money to support them and their three children who are 6, 8 and 13 years old. She works as a certified nursing assistant at the Idaho State Veterans Home in Lewiston.

Their creditors are helping by deferring car payments and rent, but they will still have to find a way to repay those temporary loans.

“The biggest stress is how are we going to get through it?” Bremerton said.

Coronavirus precautions have created new tensions in their house. The kids miss school, and they have had difficulty finding access to computers so they can complete assignments online.

Keeping the grocery bill down is harder because the children are home more. He and his wife feel as if they have less time for each other because they are trying to keep the kids busy, organizing activities such as fishing trips to Mann Lake.

He’s also talking on the telephone with a mentor regularly and attending a sobriety support group online, wanting to prevent a relapse of the type of behavior that sent him to prison.

“It’s not the same as meeting in person at all,” he said.

With so much in flux, some say continuity has never mattered more. Lewis misses seeing her customers, but takes solace in the fact she still has a job in the same building where she has spent most of her career.

“Having a job is that security,” she said. “It’s what helps people survive.”

What she does now is vastly different from before. She walks through Walmart gathering items customers have ordered online.

Her temporary layoff from the salon followed almost 20 years of a gradual climb in the profession.

Before she became salon manager, she supplemented her wages by cocktail waitressing on the weekends and sometimes leading karaoke events.

“It has been a steady job, and it helped me buy my house four years ago,” Lewis said.

It’s hard not seeing her clients, with whom she has developed ties, and she is glad the salon is reopening as soon as the rules allow it. Kids she has given their first haircuts to often popped in to say hello with their parents when their families shopped at Walmart.

One of her customers has respiratory issues. Lewis was so worried she might get ill or not have access to groceries that she called her when everything was shutting down, offering to leave anything she needed on her doorstep.

It turns out, the woman is doing fine. Lewis recently fielded a phone call from her when she was double-checking where she should park to pick up her groceries.

“I recognized her voice instantly,” she said. “We got to chit chat. It was nice.”

At the start of the COVID-19 pandemic, Kevin and Sunshine Brotherton worried that the loss of his job at a Clarkston boat-building plant was j…