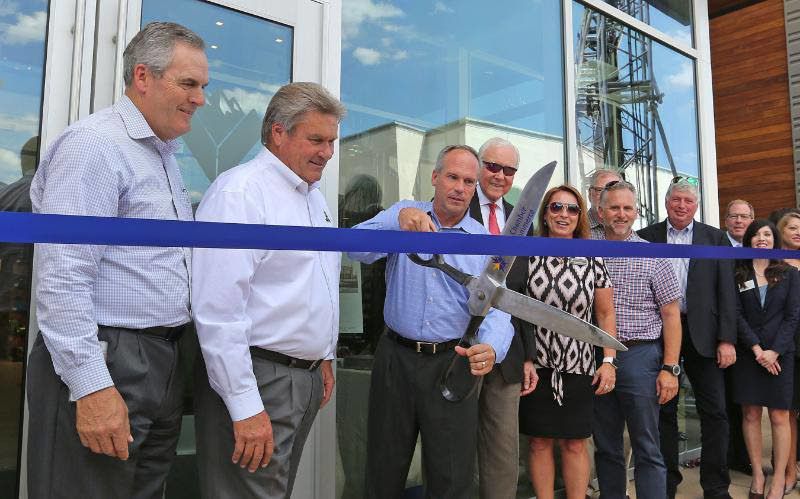 Mark DeYoung cuts the ribbon on Vista Outdoor’s new corporate headquarters in Farmington, Utah, in 2016, when he was the company’s CEO. 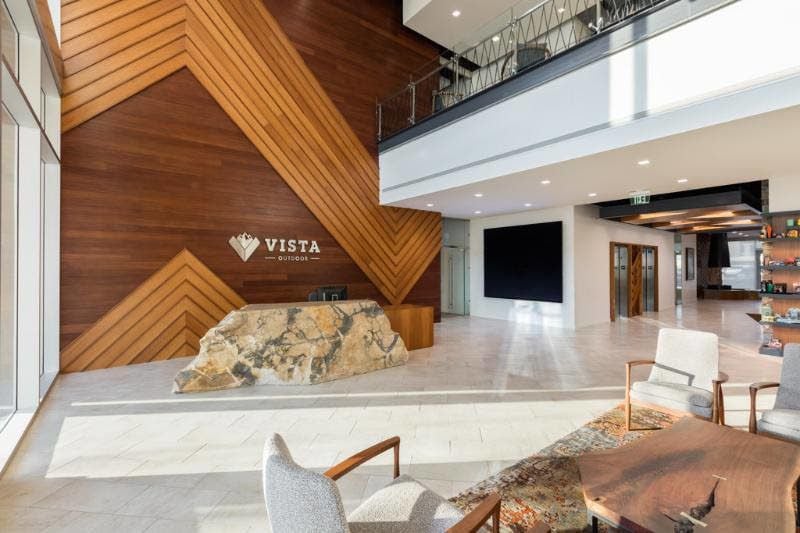 A reception desk crafted from a 9,000-pound granite stone is a focal point in the lobby of Vista Outdoor’s headquarters in Farmington, Utah. The company is shifting operations housed in the building to Minnesota and the Washington, D.C., area.

Mark DeYoung cuts the ribbon on Vista Outdoor’s new corporate headquarters in Farmington, Utah, in 2016, when he was the company’s CEO.

A reception desk crafted from a 9,000-pound granite stone is a focal point in the lobby of Vista Outdoor’s headquarters in Farmington, Utah. The company is shifting operations housed in the building to Minnesota and the Washington, D.C., area.

Vista Outdoor is closing its Salt Lake City-area headquarters in a move aimed at saving money.

The company announced the decision in a recent conference call for stock market analysts about its earnings.

“(The headquarters are) much larger than we need (and are) our most expensive piece of corporate real estate and (are) an unnecessary cost to incur during our turnaround,” said CEO Chris Metz.

Vista lost $60.2 million in the fiscal year that ended March 31, as the company grappled with dwindling demand for ammunition after the election of President Donald Trump. That trend has continued with an $85.2 million loss in the first six months of its currrent fiscal year, through Sept. 30.

The operations of the Farmington location, 17 miles north of Salt Lake City, are being split between offices in the Minneapolis area and Arlington, Va., adjacent to Washington, D.C.

Anoka, Minn., near Minneapolis, is home to Federal Premium, one of the company’s two ammunition factories. The other is its CCI/Speer factory in Lewiston, which has direct flights to Salt Lake City.

Consolidating Vista’s corporate footprint is a belt-tightening measure instituted by Metz, who took the CEO job about a year ago after serving a similar role at Minneapolis-based Arctic Cat. The move is symbolic of the shift in direction Metz has introduced at Vista.

The company debuted the 33,000-square-foot headquarters in 2016 with great fanfare, posting videos on its website and holding a ribbon-cutting attended by Utah Sen. Orrin Hatch and the company’s then-CEO, Mark DeYoung.

The design was intended to illustrate Vista’s slogan of “Bringing the World Outside,” with features such as a main-lobby atrium built from locally sourced wood and stone that has a view of the Wasatch Mountains.

A fireplace in the back lobby was a communal location for employees to gather, and seven outdoor-themed huddle rooms provided work collaboration areas. Showers and secured bike storage were part of an initiative to encourage employees to bike to work.

“We feel we picked an epicenter to put our headquarters in, and it supports all of the activities we participate in. Utah is a great place to enjoy all of the activities that our products support,” said former company spokeswoman Amanda Covington in a news release updating progress on construction.

The headquarters opened during a time period when Vista Outdoor purchased a number of businesses that make recreational products, in an effort to be a one-stop shop for big-box sporting goods stores.

After Metz’s arrival, the company shifted its approach, choosing to focus on ammunition, hunting accessories and a handful of its more recent acquisitions, such as Camelbak and Camp Chef.

It is in the process of selling the eyewear brands Bolle, Cebe and Serengeti and seeking buyers for firearms maker Savage. Other subsidiaries that may be divested include paddleboard maker Jimmy Styks as well as Bell, Giro, Blackburn, CoPilot, Krash and Raskulz, companies that make products such as ski helmets and bicycle equipment.