The small town of Bovill will once again have a place where residents can gather and hoist a cold one when the historic Elk Saloon is restored. 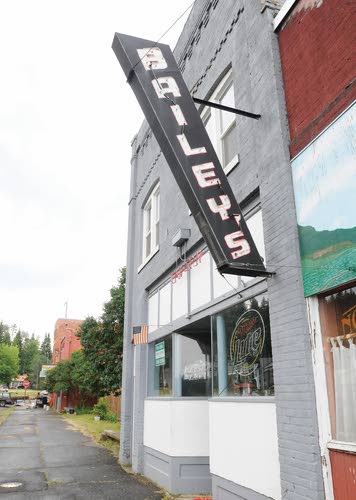 The old Bailey’s bar in Bovill remains empty and for sale after closing 18 months ago.

The small town of Bovill will once again have a place where residents can gather and hoist a cold one when the historic Elk Saloon is restored.

The old Bailey’s bar in Bovill remains empty and for sale after closing 18 months ago.

BOVILL - This tiny town has been down by one for more than a year if you believe it takes a bar, a church and a school to make a community.

The hole, however, is about to be filled. Bradley Dammerman and his business partner, Don Martin, are planning to open the Elk Saloon in August at 114 Main St.

When it opens, it will be the only business in the mountain logging town of fewer than 300 that's still reeling from the loss of Bailey's Bar more than 18 months ago. A "for sale" sign hangs on the 3,500-square-foot building that was constructed in 1914, when Bovill was thriving.

The bar was much more than a place for people to share a cold one. It was the only thing in Bovill other than a Presbyterian church, a school that goes through the third grade, a post office, city hall that's staffed twice a week and a recreational vehicle park, said Chris Childers, the bartender at Bailey's.

Cheryl Hartman, the wife of one of the former bar owners, would take shopping lists from community residents when she made monthly Costco runs to Lewiston.

"(The bar was) the answering machine," Childers said. "We cashed checks. We kept milk and bread. It was the only place kids could come and buy a candy bar. We had a counter they couldn't go by."

It wasn't just townspeople who missed Bovill having a bar. Without Bailey's, there was no Bovill run, a tradition where university students would take the back roads, stopping for drinks in Deary, Bovill and Potlatch.

"It would bring the bar pretty good money for the hour they were here," Childers said.

The people reviving the town's bar have deep ties to the community. A former logger, Dammerman raised his three children in Bovill and now owns Timberworks, a company that dismantles buildings, reclaiming lumber. A Lewiston resident, Martin, the owner of Independent Trucking Company, recently purchased a weekend home in Bovill.

Dammerman's daughter, Sheena Broemeling, will oversee the bar. She recently returned to Bovill to be office manager at Timberworks.

While the Dammerman family recognizes the bar's importance, they're not trying to replicate Bailey's. They chose a location long on history and character, a building that's more than 100 years old and was constructed as First State Bank and in the 1940s became a bar.

"The cooler where they store everything is the old vault," Broemeling said.

Their business goals may be different, too. Her dad and Martin expect the business to cover its expenses, but they don't need to it to make a profit since they have other moneymaking operations, Broemeling said.

Childers, Broemeling and other Bovill locals hope the bar is just one step in revitalizing the town, which is almost a century past its peak.

The town was first established in 1901 by Hugh Bovill, the son of an English lord, as a resort where visitors dined on tables decked out with fresh-cut flowers and linen tablecloths.

Bovill boomed into Latah County's third-largest town after the arrival of the railroad in 1907, becoming a switch point for logs headed to the sawmill in Potlatch. At various times, it was home to a hospital, a mill and a number of saloons that catered to lumberjacks from Potlatch's logging camps.

Bringing back that vitality won't be easy. The Bovill Improvement Group is gradually making progress toward restoring the Bovill Opera House, which was the town's movie theater when it closed in the early 1960s.

One of the biggest contributions so far, $25,000, came from an anonymous donor, said Sheila Loomis, a member of the group. "We're trying to raise money to get a roof on it because it leaks."

The upstairs that once housed a miniature golf course, dance floor and roller-skating rink is ruined, but the ground floor could eventually be restored as a venue for plays and weddings.

"It's going to be beautiful," Loomis said.

"As a family, we're slowly trying to bring this town back," Broemeling said.