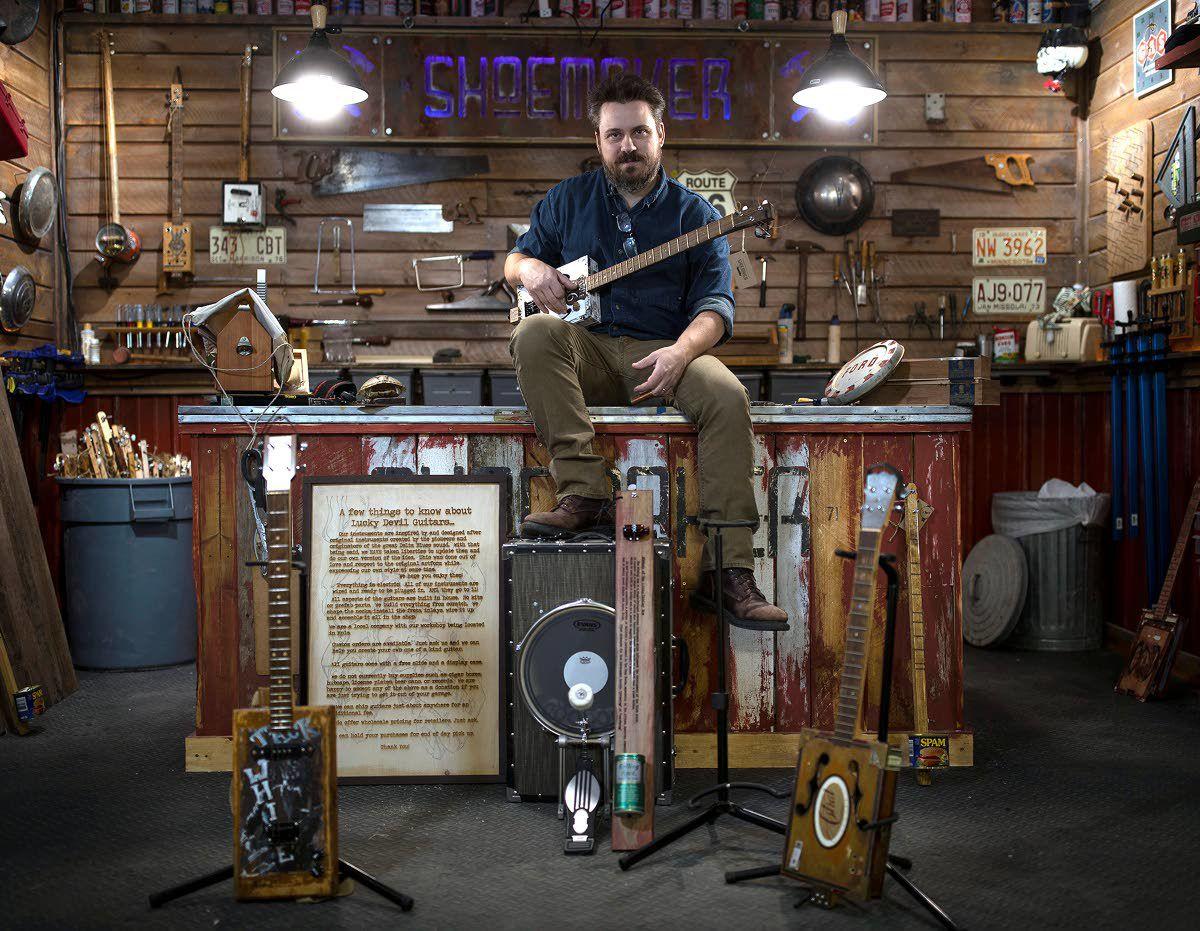 Gipson Shoemaker III perches on the counter in his Minneapolis shop holding a cigar box guitar, one of his creations. 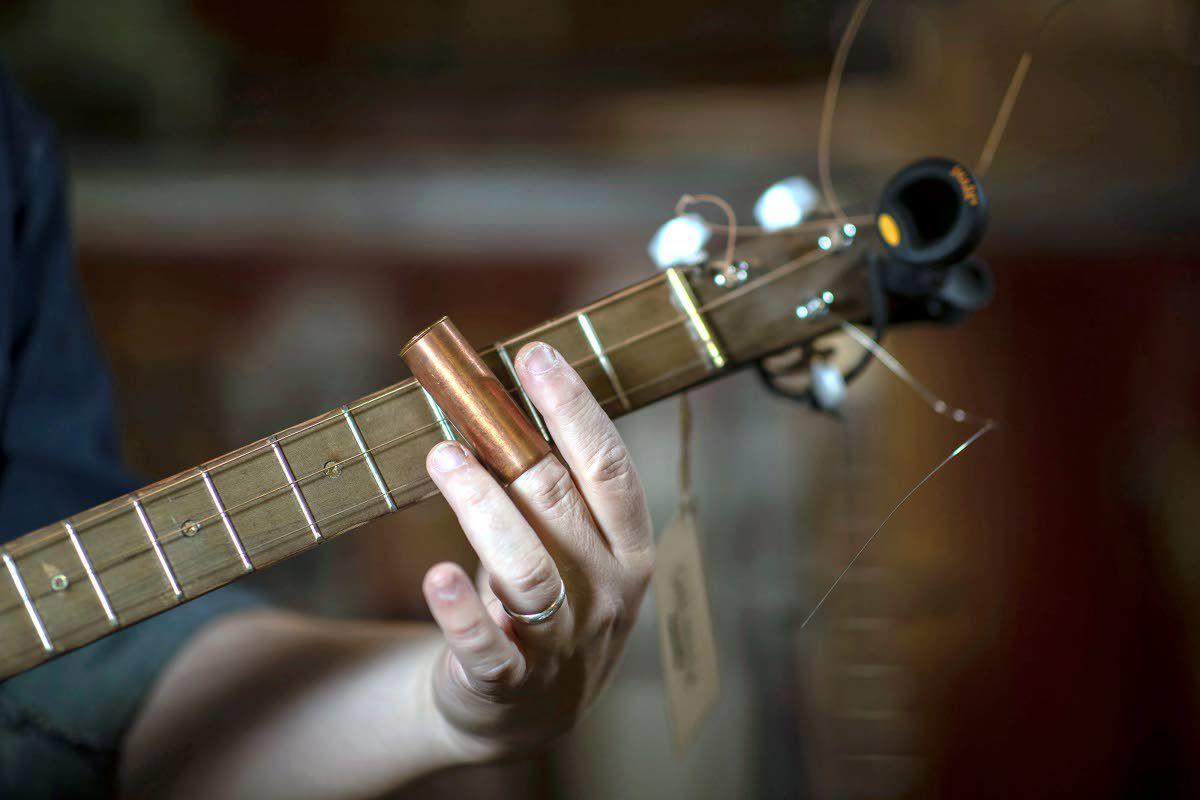 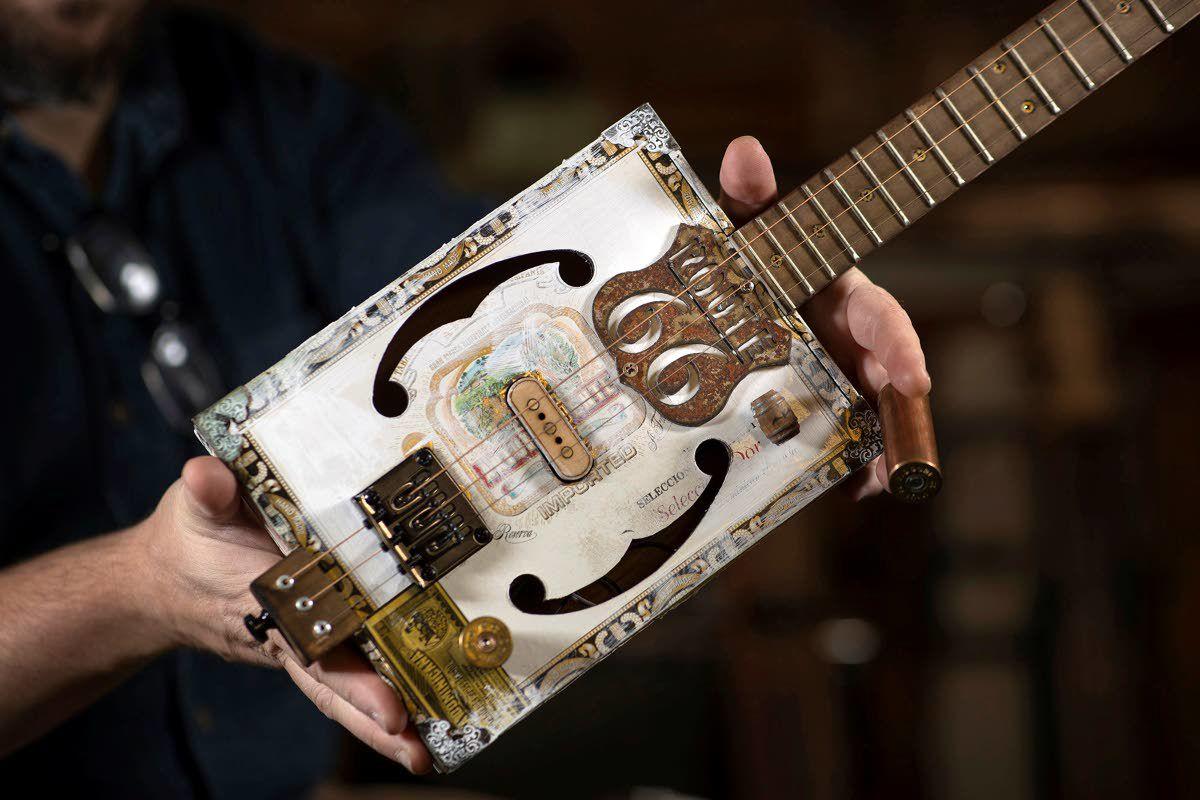 Gipson Shoemaker III perches on the counter in his Minneapolis shop holding a cigar box guitar, one of his creations.

A cigar box is just a cigar box — except when it’s a guitar.

In the hands of Gipson Shoemaker III, the simple wooden box becomes a musical instrument worth hundreds of dollars and capable of producing a raw, gritty and authentic sound.

As owner of Lucky Devil Guitars (gipsonshoemaker.com), he’s become part of a growing number of music makers who are rediscovering a folk instrument born out of poverty and ingenuity that was popular in the United States from the Civil War through the Great Depression.

For Shoemaker, it’s a passion project.

Shoemaker, 48, said he spent much of his life trying to master the six-string guitar. Inspiration struck when he saw “It Might Get Loud,” a 2008 documentary about the electric guitar.

At one point in the film, rock guitarist Jack White pounds some nails into a piece of scrap lumber, stretches a wire over a Coke bottle, installs an electric guitar pickup, plugs in an amplifier and makes it wail. “Who says you need to buy a guitar?” White asks in the film.

That was enough to persuade Shoemaker to try it himself. He built his first cigar box guitar in 2011. It took about three hours.

“When I started this, I wanted to put a stick on a box and I wanted to plug it in and play it,” he said. “I was so geeked up to hear it, I was practically trembling when I plugged it in.”

By using a guitar slide on his cigar box instrument, he found he was able to play satisfying power chords right from the start.

“It’s three notes and you’re sparking to glory,” he said.

War and want helped lead to the creation of the cigar box guitar.

Cigars used to be shipped in barrels until an 1864 revenue law signed by President Abraham Lincoln to raise money for the Civil War led to cigars being packaged in small wooden boxes, which were sealed with a tax stamp.

Once emptied, those boxes became a perfect resonator for a homemade instrument to someone who didn’t have the money to buy a guitar, banjo or fiddle, according to Shane Speal, a cigar box guitar maker, author, performer, website operator and museum curator from York, Pa. All you had to do is add a broom handle, some nails and a bit of wire.

“No matter how poor someone may be in this country, they’ll find a way to do what’s in their heart,” said Speal, who calls himself the King of the Cigar Box Guitar.

Cigar box guitars quickly spread from the Deep South to the lumberjack camps of the Upper Midwest, with instructions published in newspapers and DIY books.

“Guys have always been doing it, mostly out of pure desperation,” Shoemaker said. “When you’re making your own instrument, there’s a deep passion.”

Speal rediscovered the instrument when he got interested in the blues and wanted to hear what it sounded like in its most primitive form. He built his first cigar box guitar in 1993 and later created a website, cigarboxnation.com, which would help introduce a new generation of makers and musicians to cigar box guitars.

“I wanted something creaky, out of tune, imperfect,” Speal said. “Playing a guitar you made with your own hands, there’s nothing like it.”

Shoemaker gave the first cigar box guitars he made as presents or donated them to fundraising auctions. After he got calls from people asking him to build one for them, he took to selling them at maker shows, craft fairs and the Minnesota State Fair.

Along the way, he refined his manufacturing process by joining a co-op that gave him access to tools like laser engraving machines. He also found cigar shops that would supply him with empty boxes and learned where to buy good, hard maple that he shapes into guitar necks.

Shoemaker, who’s been selling guitars for about five years, makes about 75 of them each year. Prices range from about $350 for his signature series three-string guitar to up to $850 for a customized instrument with, for example, the image of a loved one engraved on the back or a bottle opener attached to the side.

He also makes a one-string, wire-nailed-to-a-board instrument called a diddley bow that costs as little as $50. He calls the one he makes with a tinned pork can a SpamJo.

His workspace, in the basement of an office building in the Bryn Mawr neighborhood, is full of found objects and odds and ends — old skeleton keys, Zippo lighters, bottle caps, tobacco tins, empty shotgun shells, metal drawer pulls, domino pieces, dice. All of which might be repurposed as one-of-a-kind details on an instrument built from scratch and scrap.

“If someone can think of it, I can probably make it,” he said.

St. Paul resident Cheri Fink had Shoemaker make a guitar detailed with bullet holes and an image from a spaghetti western film collection. It was a surprise college graduation gift for Fink’s son, Elliot Fink.

“We chose it because it is unique and no one else will have the same guitar and Elliot will learn new guitar playing techniques,” Cheri Fink said.

“It sounds great,” Elliot Fink said. “I’ve never really been able to get that great slide guitar sound before.”

“They do have a unique sound,” said William Jehle, a “detritomusicologist” from Muscle Shoals, Ala., who wrote a history of cigar box guitars called “One Man’s Trash.”

“Man, you’re playing a cigar box. All bets are off.”