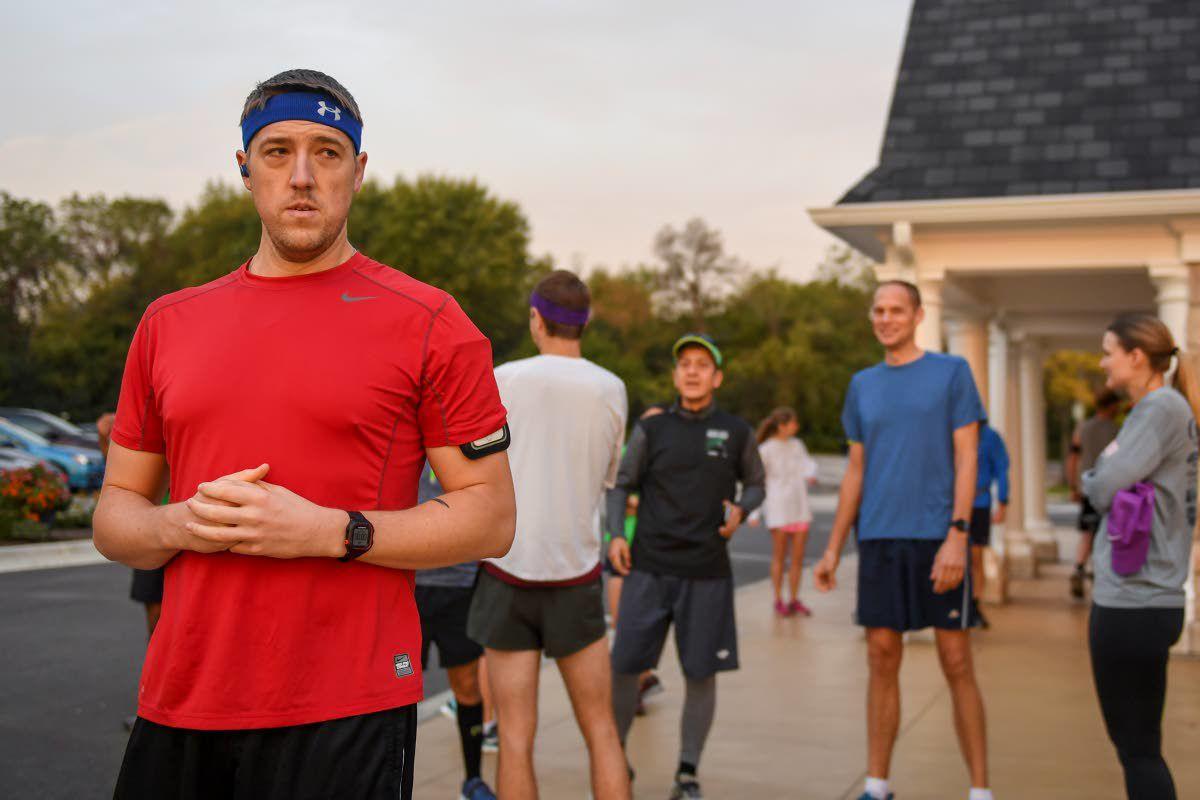 Brian Kroeter waits at Libertyville (Ill.) Metro Station with his running club Oct. 5, prior to their eight-mile training run. 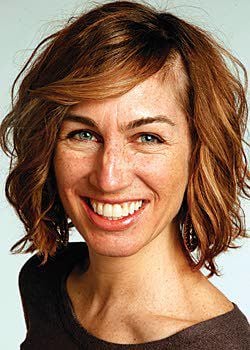 When Brian Kroeter runs 26.2 miles through Chicago’s streets today, past houses and parks and bars that won’t be open for hours and caffeinated spectators waving hand-drawn posters, he’ll do so with his sister’s name tattooed on his arm.

Her photo will be on the back of his customized race jersey: the two of them — big brother, younger sister — at University of Illinois at Urbana-Champaign. She was completing her master’s degree in social work. He was there to visit her.

Her memory will be etched in his brain, and her legacy will fuel his steps.

She was a licensed clinical social worker in the Blessing Hospital Emergency Room in Quincy, Ill. She played on the state champion high school basketball team at Quincy Notre Dame. She delivered Meals on Wheels. She looked for ways to help, always.

She didn’t show up for a shift at the hospital one day and some co-workers went to check on her at home. Brian’s dad, Craig, called him that night with the news.

“Your first reaction is, ‘No, that can’t be right. You don’t know all the facts,’ ” Kroeter, 30, said. “Everyone was totally shocked.”

She had suffered in silence. Her family members and friends didn’t know she was struggling with mental health challenges, Kroeter said. He asks himself, in hindsight, if he missed signs.

He knows that’s an impossible question to answer. He knows he can do more good by looking forward.

A year after his sister’s death, Kroeter is running the Bank of America Chicago Marathon to raise money for the American Foundation for Suicide Prevention. He wants to contribute to the group’s mission of saving lives and supporting people affected by suicide. He wants to raise awareness about suicide’s prevalence and suicide prevention.

Kroeter, who lives in Libertyville, set a goal of raising $12,500 to fund research, educate the public about mood disorders and suicide prevention and promote policies and legislation that impact suicide and support survivors of suicide loss and people at risk. By Monday, he was at $11,621.

He started training for the marathon in March, rising at 4 a.m. three days a week to squeeze in a run before work and family obligations kicked in. He and his wife, Allison, are expecting a baby in January. They also have an 18-month-old son, Lucas. Katelyn was Lucas’ godmother.

“We just had his baptism a month before she died,” Kroeter said. “In a way, I think his presence helped everyone get through that time a little bit.”

Lucas also gave him a glimpse into the weight of his parents’ grief.

“Running lets you set everything else aside for a little while and just go out and reflect,” he said. “You lace up your shoes, put on some music and just kind of leave it all behind.”

More often than not, though, Kroeter found that his sister didn’t stay behind.

Kroeter’s parents are coming to Chicago from Quincy, Ill., to cheer him on during the marathon. He has an aunt and uncle who live in the city. They’ll be there. So will another aunt and uncle from St. Louis and some friends and co-workers. His wife and son will be there.

And so will Katie. On his shirt. On his arm. On his mind and on the mind of his family and friends who knew her and miss her and want to honor her too-short life.

“My sister was always helping others,” Kroeter said. “That’s really my goal, to kind of continue her mission.”

The National Suicide Prevention hotline is 800-273-8255, or online at suicidepreventionlifeline.org.

Stevens writes for the Chicago Tribune and may be contacted at hstevens@tribune.com or on Twitter @heidistevens13.

Do you support companies retiring longtime brand names and images such as Aunt Jemima and Uncle Ben?