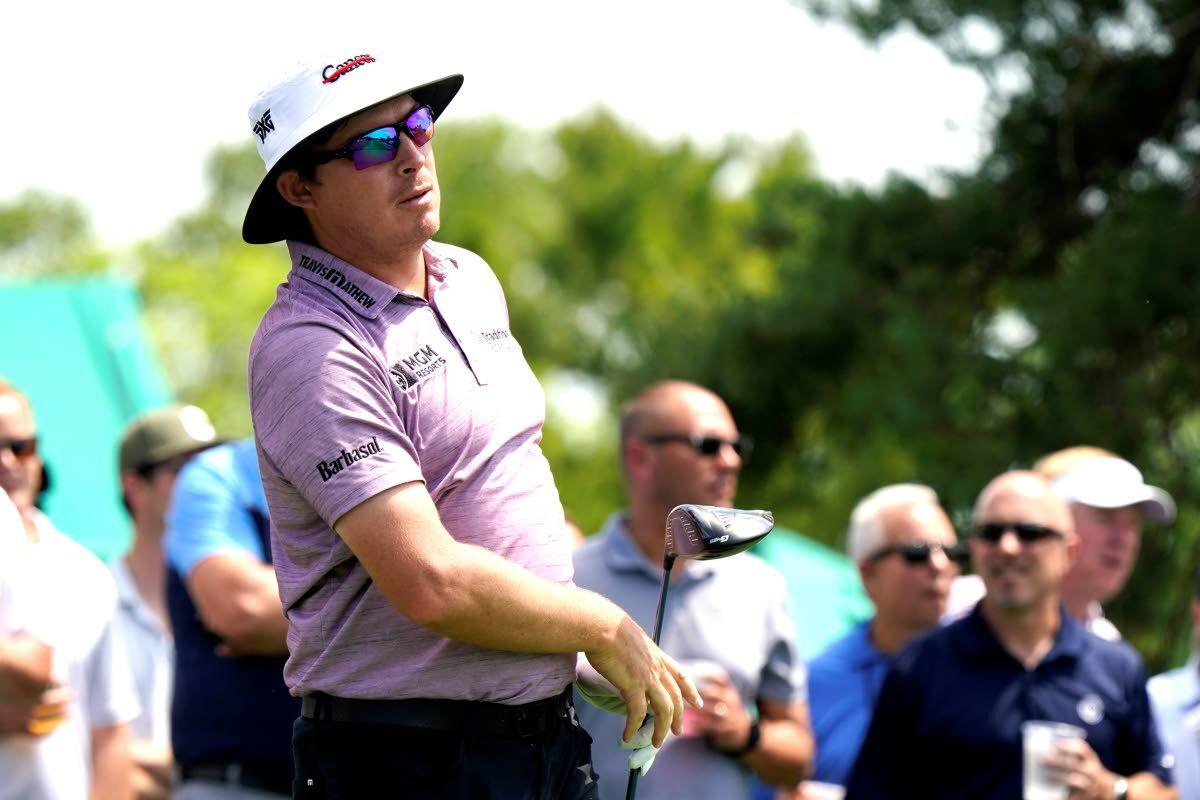 Joel Dahmen watches his tee shot on the 11th hole during the second round of the Memorial golf tournament, Friday, June 4, 2021, in Dublin, Ohio. (AP Photo/Darron Cummings) 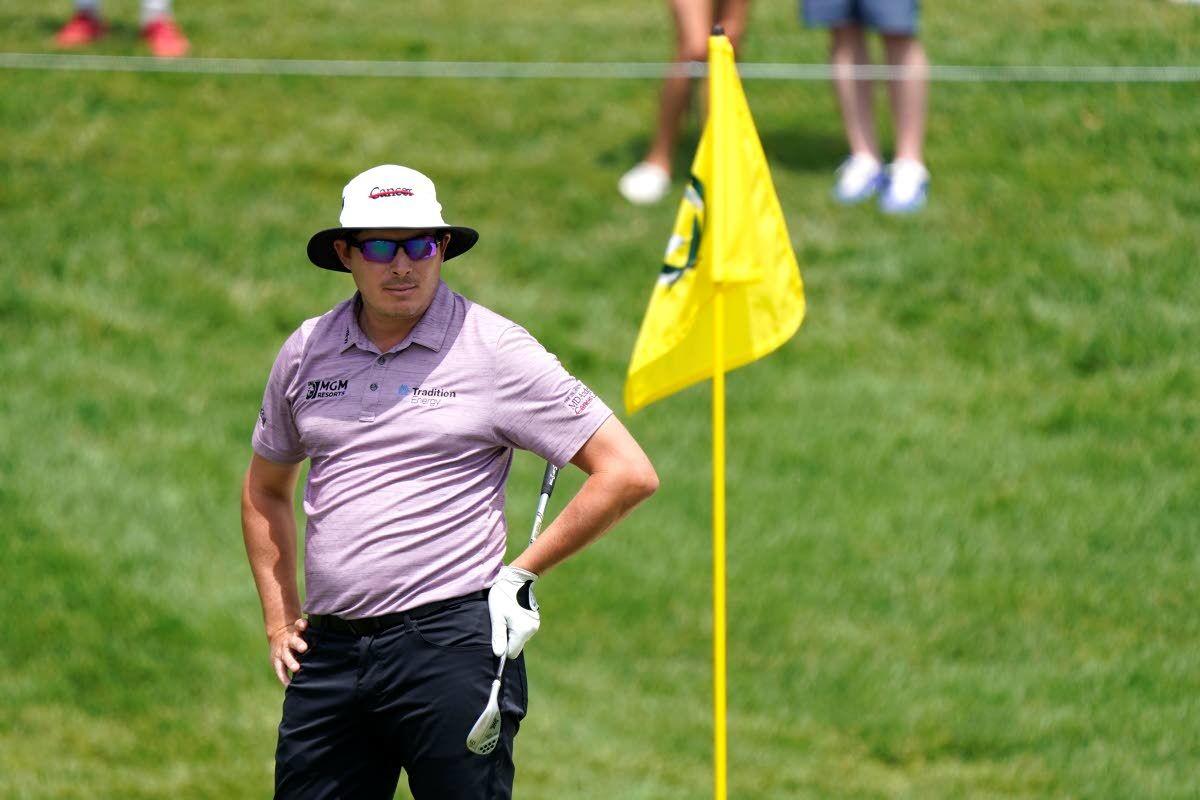 Associated PressJoel Dahmen waits to chip to the 10th green Friday in the second round of the Memorial Tournament at Dublin, Ohio. 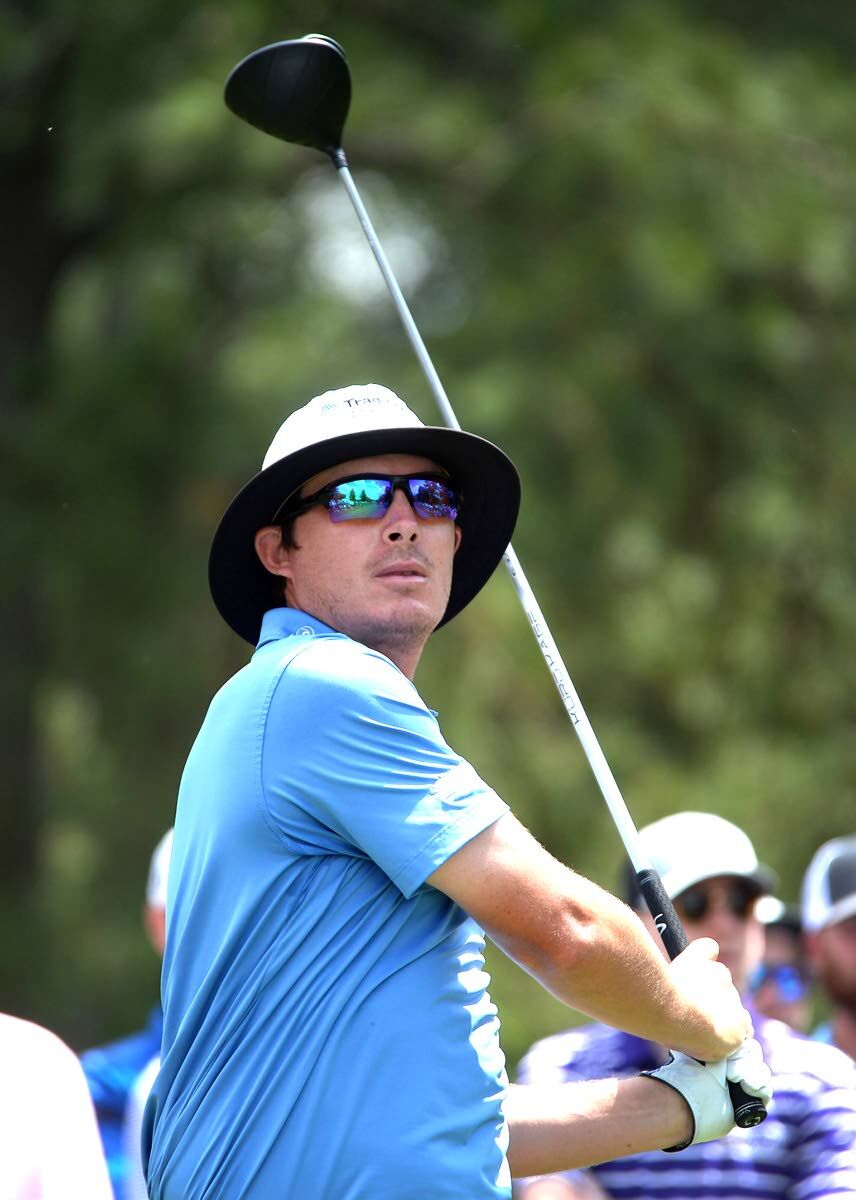 Associated PressClarkston High School graduate Joel Dahmen is shown at the 2019 Wells Fargo Championship, in which he placed second. 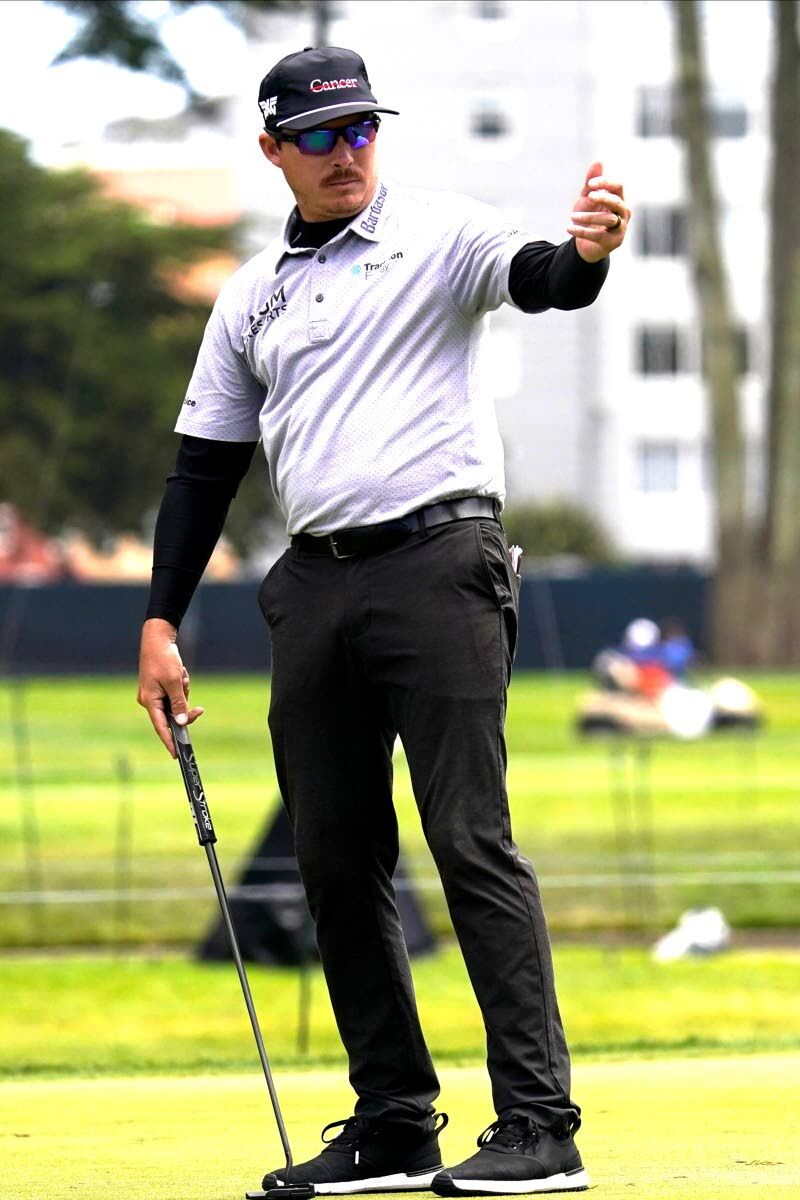 Joel Dahmen reacts after missing a putt on the second hole during the third round of the PGA Championship golf tournament at TPC Harding Park Saturday, Aug. 8, 2020, in San Francisco. (AP Photo/Jeff Chiu) 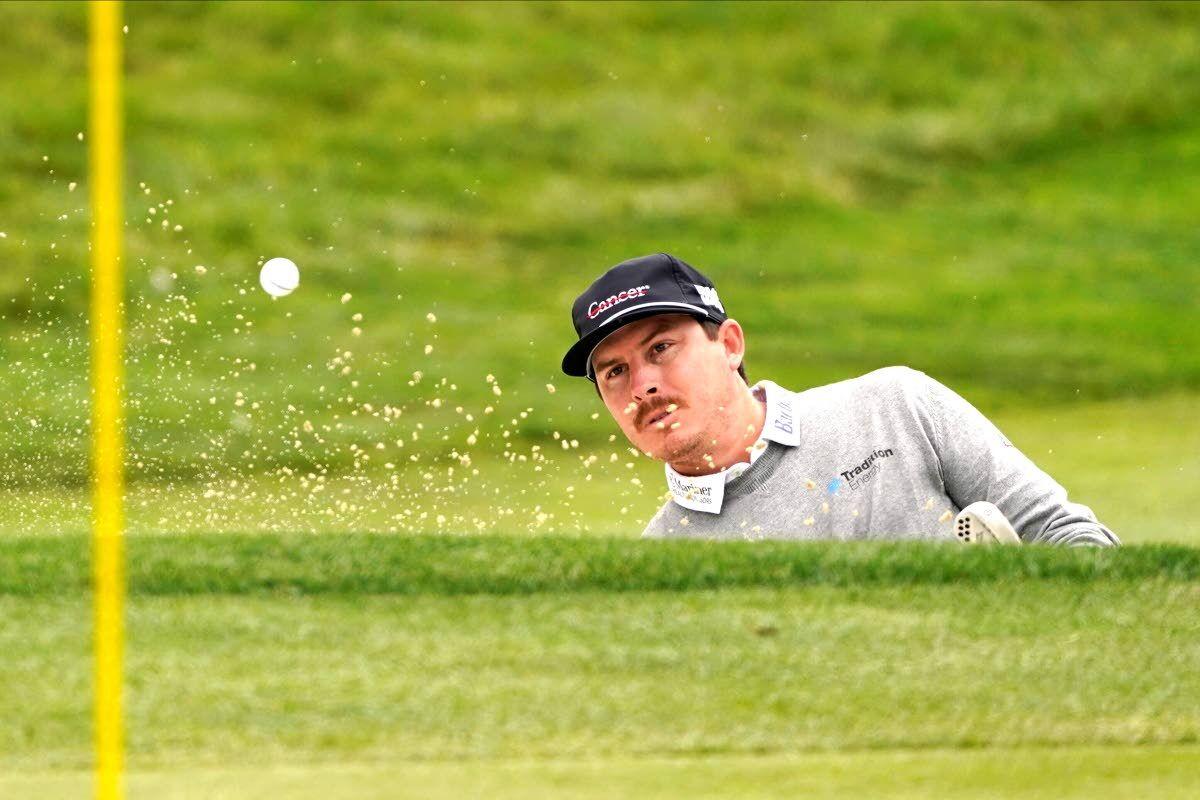 Joel Dahmen hits from the bunker on the fourth hole during the final round of the PGA Championship golf tournament at TPC Harding Park Sunday, Aug. 9, 2020, in San Francisco. (AP Photo/Charlie Riedel)

Joel Dahmen watches his tee shot on the 11th hole during the second round of the Memorial golf tournament, Friday, June 4, 2021, in Dublin, Ohio. (AP Photo/Darron Cummings)

Associated PressJoel Dahmen waits to chip to the 10th green Friday in the second round of the Memorial Tournament at Dublin, Ohio.

Associated PressClarkston High School graduate Joel Dahmen is shown at the 2019 Wells Fargo Championship, in which he placed second.

Joel Dahmen reacts after missing a putt on the second hole during the third round of the PGA Championship golf tournament at TPC Harding Park Saturday, Aug. 8, 2020, in San Francisco. (AP Photo/Jeff Chiu)

Joel Dahmen hits from the bunker on the fourth hole during the final round of the PGA Championship golf tournament at TPC Harding Park Sunday, Aug. 9, 2020, in San Francisco. (AP Photo/Charlie Riedel)

First a career milestone, and now a life milestone.

Joel Dahmen, a former University of Washington golfer and a Clarkston native, celebrated his first victory on the PGA Tour at the end of March.

It has been quite a decade since. Dahmen beat cancer (as did his brother), restarted his golf career, made his way through the mini-tours, hired a longtime friend as his caddie, married the woman who gave him the kick he needed, became one of the more popular players on the PGA Tour, and now is a winner on that Tour.

It’s a lot, but it also explains the emotional celebration Dahmen had on the 18th green with caddie Geno Bonnalie and wife Lona (Skutt) Dahmen after winning the Corales Puntacana Resort & Club Championship in the Dominican Republic in the last week of March.

“My road and my journey took me longer to get to the PGA Tour, and longer to win,” said Dahmen, 33, who lives in Scottsdale, Ariz. “But also, I have an incredible wife who has been my side for nine years, and she has been through it all, and Geno, who was one of the only guys by my side when I was going through (cancer), and those two people on the green with me have been with me since the beginning.

“It was just so much raw emotion, something we had always dreamed about.”

In 2014, the chances of Dahmen winning on the PGA Tour seemed small. He had beaten cancer but had been unable to advance out of the Canadian tour. In the fall of 2013, he failed in PGA Tour qualifying school and fell into a funk.

That’s when then-girlfriend Lona stepped in, telling him to either get back on the golf course or get a job.

“She worked two jobs to pay our bills,” Dahmen said. “She was always there, she was always pushing me — and she didn’t care if I played golf or not, she just wanted me to be the best version of myself, and she gave me a kick in the butt when I probably didn’t want to get kicked in the butt.”

The rest is history. He won two times on the Canadian Tour to advance to the Korn Ferry Tour and hired Bonnalie as his caddie.

In 2016, he earned his PGA Tour card by finishing in the top 25 of the Korn Ferry Tour standings — finishing at No. 25, $975 more than Xander Schauffele, who has also gone on to bigger things.

Dahmen started to make a name for himself in 2018, with a second-place finish, three finishes in the top 10 and 11 in the top 25 and made nearly $1.5 million. In December that year, with Bonnalie officiating, he married Lona.

It was even a better golf season in 2019, with another second-place finish, and more than $1.9 million in earnings.

He was emerging off the course as well, with a social media presence and a reputation as a nice guy — he was recently No. 23 in Golf Digest’s list of the 30 nicest guys on the PGA Tour.

“My parents taught me to treat everybody with respect,” Dahmen said. “Everyone has their own challenges. So no matter what it looks like on the outside, people are always having their own battles, whether it’s with family or relationships or whatever it is. So I just think it’s important to treat everybody with respect. It’s easy to just be kind. It’s the easiest thing in the world to do.

“Just be kind, and smile. That goes a long way as well. I think it comes from being from a small town, blue-collar type of place where I knew everybody. It’s carried over, and Geno is the same way. He’s super well-liked. It’s easier to be nice to people than be mean.”

Dahmen has a chance to impact more people as ambassador for MD Anderson Cancer Center the past two years. Considering Dahmen’s history with cancer, and the fact he often wears a bucket hat to help protect him from skin cancer, he was a natural fit for the role, and the timing was right.

“In the beginning, when I came back to golf, I didn’t want to be the cancer guy,” Dahmen said. “I wanted to be a professional golfer. I wanted people to talk about my golf game. For a couple of years, everyone wanted to bring (cancer) up all the time.”

“It transitioned at some point, and especially the last couple of years. I have a platform now, and I can share my story. I’m wearing the (MD Anderson Center) logo, I’m wearing the hats. It’s something I take seriously, and something I pride myself on.”

Dahmen said he gets many messages telling him he is making a difference.

“People are looking at me, seeing that cancer doesn’t have to be an end-all, be-all,” he said. “Hopefully, if you do beat it, and you come out on the other side, there are still great things ahead in people’s lives.”

There certainly have been for him. The one big thing missing in his career had been a PGA Tour win. Not anymore.

“We had been close before and felt like it was always going to happen, but when you get to five years (on the PGA Tour) and 111 starts — I don’t know if it was a monkey on my back, but it was definitely getting to the point where I was really wanting to win,” he said.

Dahmen, whose longtime coach, Rob Rashell, is a former UW golfer, has been back in the news since his first victory. He fulfilled a bucket-list item when he was paired with Phil Mickelson for the first two rounds of the Wells Fargo Championship in early May with the two throwing good-natured jabs at each other via Twitter beforehand.

Mickelson then shot a 65 in the first round to take the lead in the tournament. Although Mickelson faltered in that event, he stood strong for four rounds in the PGA Championship a couple of weeks ago to win that major at age 50.

“It was something I always wanted to do,” Dahmen said of playing with Mickelson. “He’s got plenty of stories, he’s super entertaining to listen to and for a kid growing up, watching Phil all the time — one of the greatest players of all time — it was really fun, and watching him win the PGA (Championship) was even better.”

Dahmen got a lot of airtime in the third round of the PGA Championship, making a nice run early in the round before faltering.

And, with less fanfare, he has marked 10 years of surviving cancer.

“The honest answer is I probably don’t think about it too much anymore,” Dahmen said of having cancer. “I was fortunate that I was young, I was healthy and my prognosis was always really good. I guess I never worried about dying. ... As far as cancer goes, I would consider myself very lucky.”