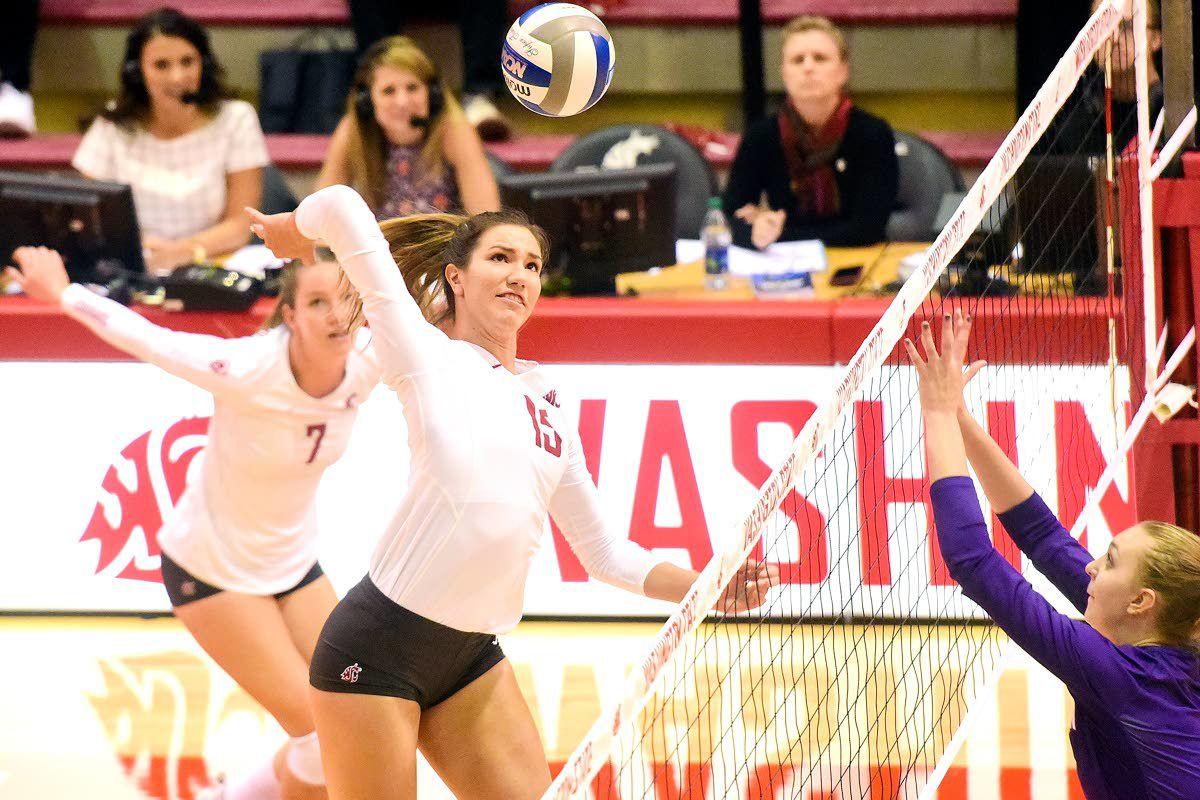 Tribune/Pete CasterWashington State middle blocker Magda Jehlarova was a first-team All-Pac-12, All-Pac-12 freshman team pick and the conference’s freshman of the year. She will help lead the Cougars against San Diego in the first round of the NCAA tournament today in Honolulu. 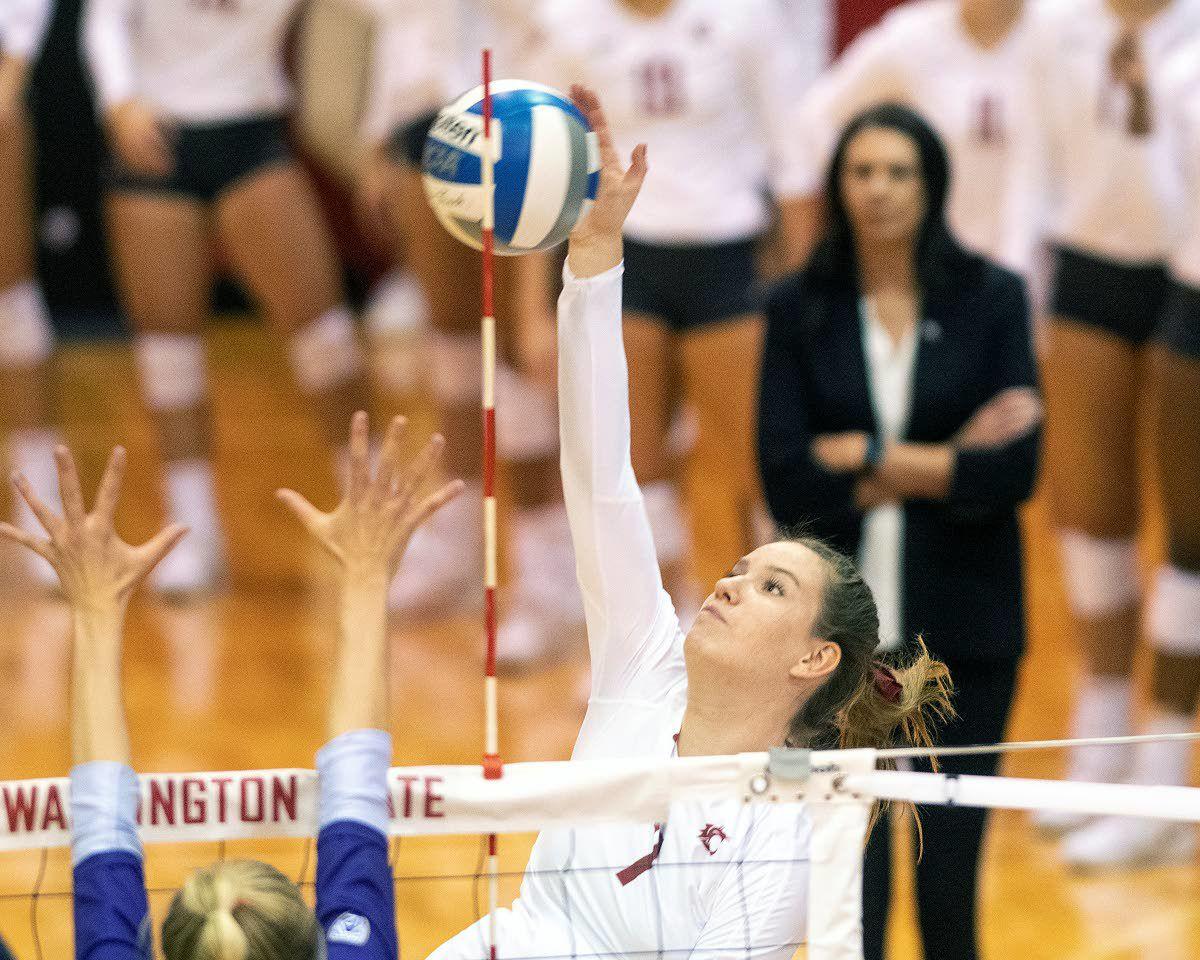 Washington State's Pia Timmer spikes the ball past a Washington defender during the first set of a Pac-12 match on Wednesday at Bohler Gym in Pullman. Timmer led the team with 14 kills.

Tribune/Pete CasterWashington State middle blocker Magda Jehlarova was a first-team All-Pac-12, All-Pac-12 freshman team pick and the conference’s freshman of the year. She will help lead the Cougars against San Diego in the first round of the NCAA tournament today in Honolulu.

Washington State's Pia Timmer spikes the ball past a Washington defender during the first set of a Pac-12 match on Wednesday at Bohler Gym in Pullman. Timmer led the team with 14 kills.

It clearly was a bit of the unknown as the Washington State volleyball team embarked on the 2019 season. With just five players who were sophomores or older, and a group of 10 redshirt freshmen or freshmen when the season began in August, it was enough to give ninth-year coach Jen Greeny cause for some trepidation.

But as the season wore on, the group came together, bonded and formed a cohesive unit and became one of the Pac-12 Conference’s strongest teams, going down to the final two weeks with a chance to finish second overall before eventually placing fifth with a 12-8 league mark and a 23-9 overall record.

The fruits of their labor were borne out Sunday, when they were selected to play in the 64-team NCAA tournament field. The Cougars (23-9), ranked No. 23 in the latest American Volleyball Coaches Association poll, will take on No. 20 San Diego (24-5) in the first round at 6:30 p.m. Pacific today at the Stan Sheriff Center on the campus of the University of Hawaii in Honolulu.

“When you have so many new people that haven’t competed at this level, it’s hard to know how the season is going to go, for sure,” Greeny said. “So I’m just really proud of the team as a whole.”

The winner will face the winner of the Northern Colorado-Hawaii matchup, which will take place later today, at 10 p.m. Pacific on Saturday.

As the team prepares for its contest with the Toreros, the conference released its all-league selections Tuesday, and it showed how much respect the Pac-12 coaches had for the WSU players and the way they competed this season.

Freshman middle blocker Magda Jehlárová earned first-team all-conference and all-freshman honors, and was named the league’s freshman of the year. Jehlárová led the conference in total blocks with 172, and in blocks per set at 1.45 overall. She finished seventh all-time in school history for total blocks in a season, seventh for block assists (143), eighth all-time in blocks per set and third all-time in hitting percentage at .363.

Dirige is the school’s all-time leader with 2,142 career digs, ranking eighth in conference history in that category, while Pukis finished the regular season with 1,073 assists, good enough for sixth overall in the conference. She also was fifth in assists per set at 9.84. Timmer currently leads WSU with 343 kills, averaging 2.93 per set, and in total attacks with 1,035 overall.

“Every time there is an individual award, especially in the sport of volleyball, it’s really because of a team effort,” Greeny said. “But I’m really, really proud of the (players) specifically who have received the awards. That’s voted on by the coaches in the conference. And there’s some really fabulous coaches in this conference that know what they’re doing. So that’s some great praise for those players, especially Magda, to come in and not only get Freshman of the Year but first-team All-Pac 12. That’s saying a lot and the coaches really respect her.”

Jehlárová led the Cougs with 12 total kills, a hitting percentage of .333, and 10 total blocks for her first career double-double. Timmer added 11 kills in 42 attacks.

“Washington is a fantastic team,” Greeny said. “Just the way that our team fought and perservered and we were able to come away with the win in a really, really tough environment was great.”

Now WSU sets its sights on San Diego, a team that won the West Coast Conference and hasn’t lost since Oct. 24 at Pepperdine. The Toreros, who finished the regular season on a nine-match winning streak and are led by WCC Coach of the Year Jennifer Petrie, feature league setter of the year Anna Newsome and freshman of the year Grace Frohling. Newsome and Frohling nailed down All-WCC first-team selections, along with senior outside hitter Thana Fayad and senior middle blocker Megan Jacobsen.

Newsome led San Diego to a team hitting percentage of .286, ranking seventh in the nation. She averaged 9.33 assists per set overall and 10.13 in WCC play. Newsome also added 240 digs. Frohling had 237 kills and a team-best 26 aces this season.

“San Diego is a really good team,” Greeny said. “They’re well-coached and they don’t make a lot of mistakes. You can see that. They won the WCC, they beat BYU twice, they had some great (nonconference) wins. So ... we’re going to have to play really well, of course.

“They have a great setter, they run a pretty fast offense, a slide. Their middles are really active. So we’re going to have to do a nice job defensively, dig some balls and get our block going as well.