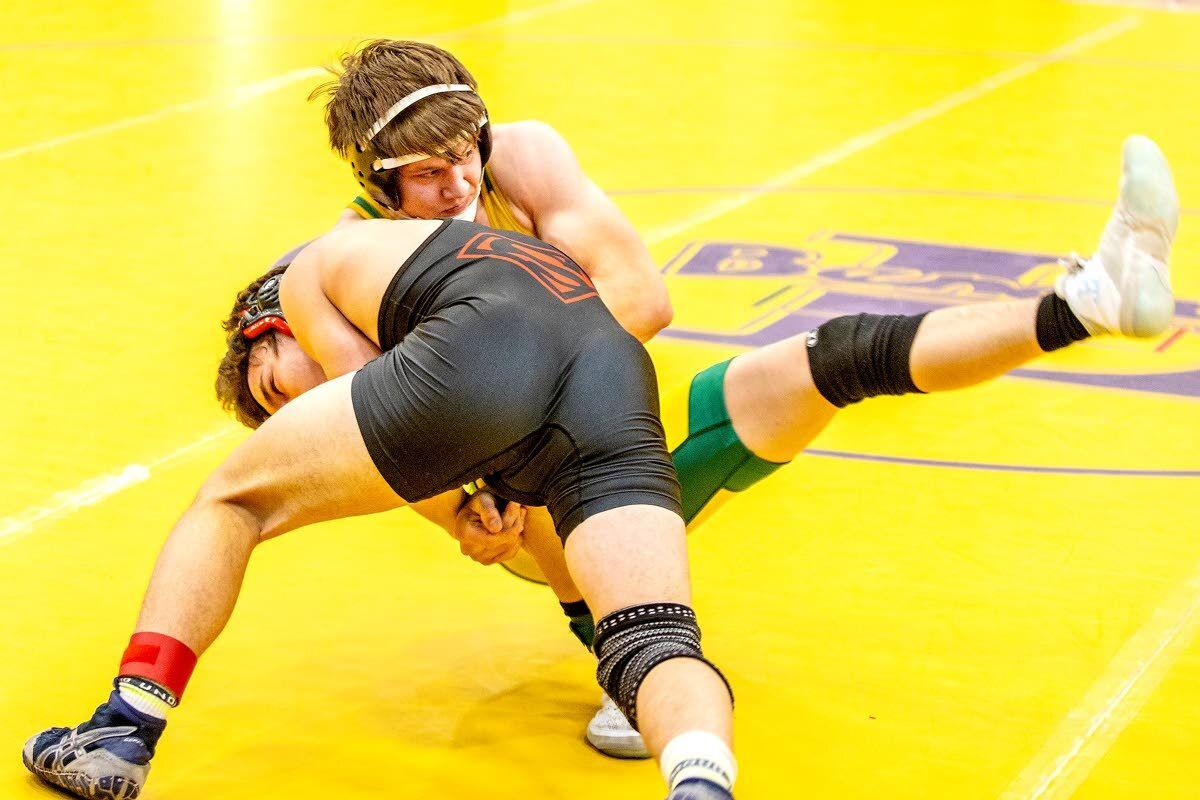 Potlatch’s Gabe Prather (back) is one of seven Loggers who will compete in this week’s state wrestling tournament in Nampa. 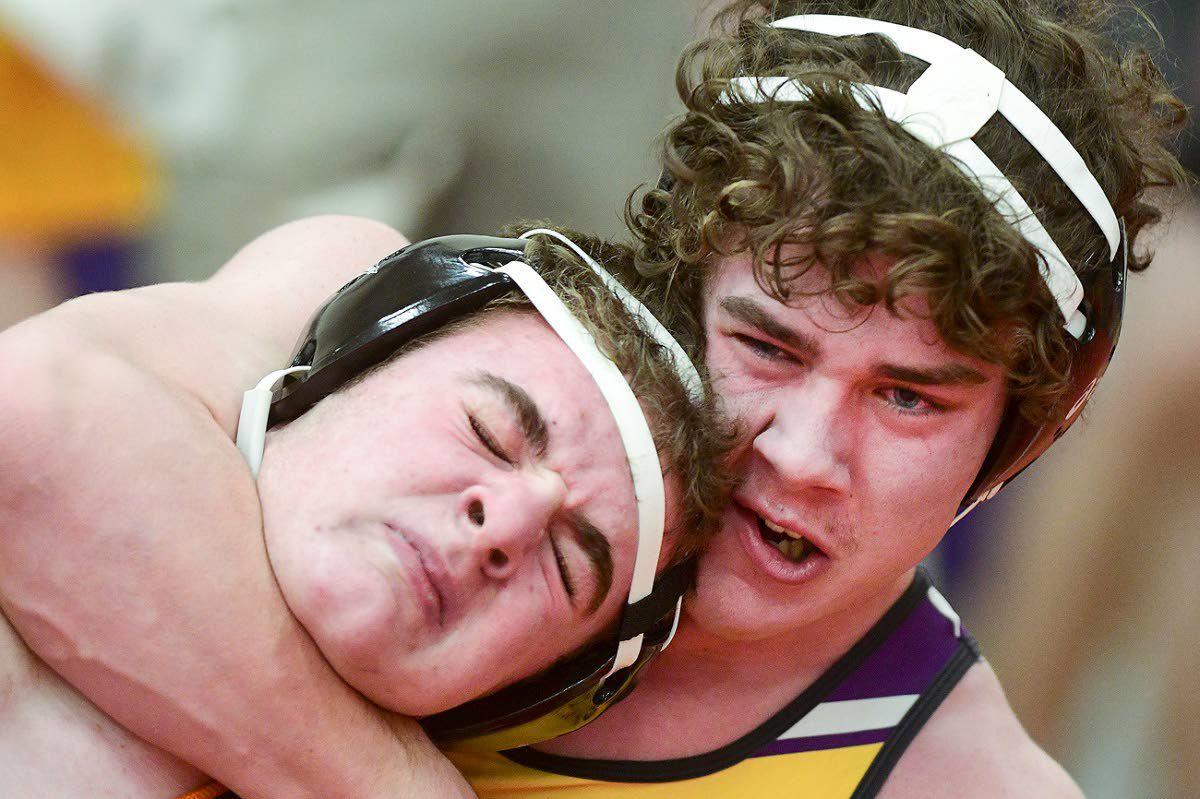 Lewiston’s Reuben Thill (right) will be going for the state title at 195 pounds this weekend at the Class 5A state wrestling meet Friday at the Idaho Center in Nampa. 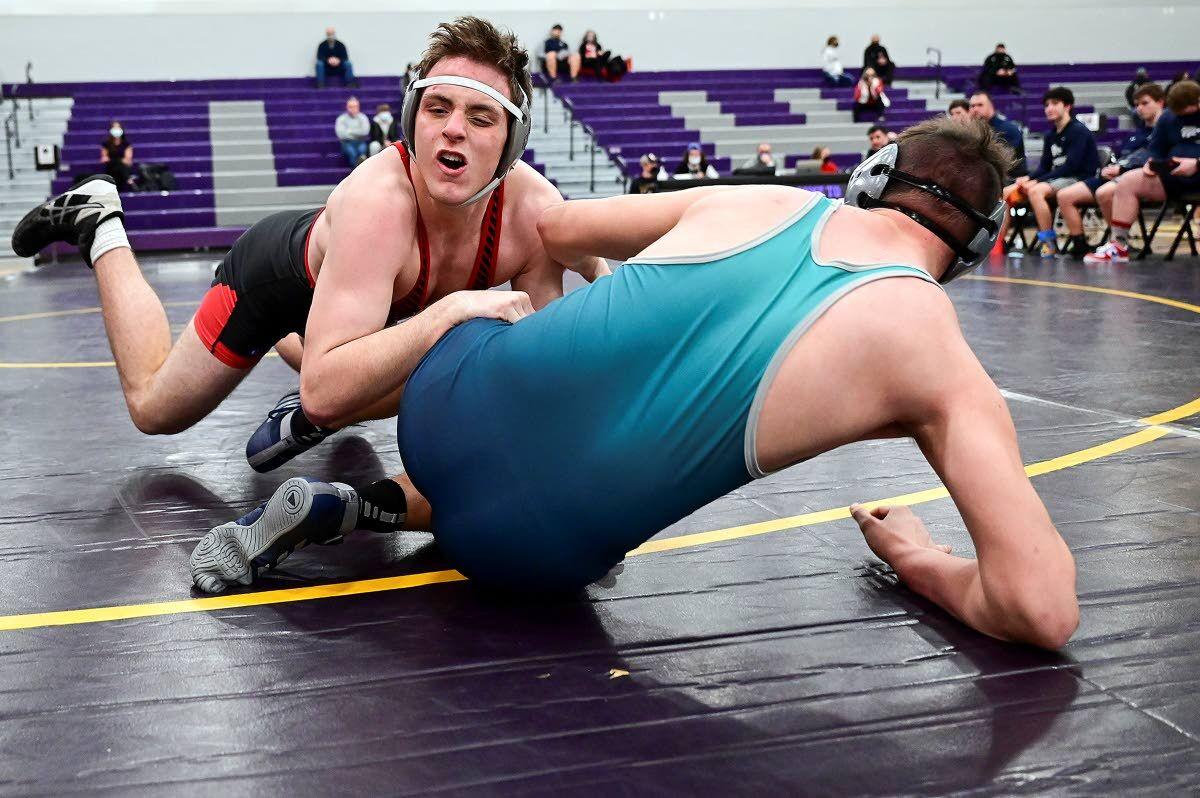 Moscow’s Logan Kearney (left) will be wrestling at 220 pounds during the Class 4A state wrestling meet Friday.

Potlatch’s Gabe Prather (back) is one of seven Loggers who will compete in this week’s state wrestling tournament in Nampa.

Lewiston’s Reuben Thill (right) will be going for the state title at 195 pounds this weekend at the Class 5A state wrestling meet Friday at the Idaho Center in Nampa.

Moscow’s Logan Kearney (left) will be wrestling at 220 pounds during the Class 4A state wrestling meet Friday.

The perils of wrestling during a pandemic couldn’t have been summed up any better than from Potlatch coach Bryan Bryngelson.

Facing a situation in which the Loggers had an opportunity to tune up for the Class 2A district tournament or possibly sit out to reduce the chances of kids getting COVID-19 or any other malady that could trip up his team’s chances of getting the most athletes out to this week’s state meet, it was not any easy decision to make.

Particularly with meets more spread out this season, the rust factor certainly played a part in what Bryngelson was thinking. But it came down one simple fact: it’s better to be cautious than to roll the dice.

“I didn’t want to take any chances,” Bryngelson said. “I wasn’t about the jeopardize the kids’ seasons. We sat out Tuesday through Thursday and we didn’t do anything. I wasn’t ­going to push the envelope on this.”

This is something most coaches in the sport have come to realize in the coronavirus era. Wrestling is a high-contact sport, where the risk of transmitting the disease plays into the decision-making of whether or not to participate in events that normally are a given.

It’s not something Bryngelson wishes would have happened.

“Did I want to do it right before the district? Obviously not,” he said. “All things considered, we got the job done, we’re moving on and we’re going to represent Potlatch at the state tournament next weekend.”

The state tournament itself, which will be conducted Friday and Saturday at the Idaho Center in Nampa, will have a decidedly different look.

For one, the tournament will be a one-day format for all classes. Classes 4A and 5A will compete at 8 a.m. Friday, while Classes 2A and 3A will conduct their tournaments at 8 a.m. Saturday.

For another, fan attendance will be limited. For the state basketball tournaments, capacity was allowed to be at 40 percent as long as masks were required and physical-distancing limitations were in place.

But the Idaho High School Activities Association is only allowing two spectators per athlete, which is what the previous guidance was for fan attendance for all sports before the state board of education lifted restrictions for regular-season events. In a statement earlier this month, the organization said it would risk losing access to state tournament facilities if it were to lift the two-spectator mandate.

On social media, the outrage has been loud. In fact, looking at one site on Facebook, parents are asking members of specific pages if they can purchase tickets for the wrestling tournament for numerous reasons.

There will be around 950 wrestlers from around the state competing at the Idaho Center. From the area, a total of 44 athletes will attempt to make their way to the top of the medal stand. Lewiston leads the way with 10 wrestlers, followed by Moscow and Clearwater Valley (seven each), Grangeville and Potlatch (six), Orofino (four), Kamiah (three) and Prairie (one).

You can make it 45 if you want to add Rylan Rogers. Rogers was a former youth wrestling standout from the Clarkston area who was at Blair Academy in New Jersey before the pandemic put sports on a pause in that state. Rogers enrolled at Coeur d’Alene for the winter semester.

He’s already made an impact, as he won the North Idaho Rumble, then the Class 5A district tournament this past weekend at Lakeland. In both events, he beat Lewiston’s Reuben Thill in the 195-pound final.

Surely, that will be some motivation for the Bengal standout, who enters with a 20-4 record and won at this year’s Rollie Lane Invitational. He finished second in the state at 182 pounds a year ago.

Kearney also will be seeking retribution. The senior, who enters the event as the No. 2 seed, will be looking to avenge a loss against Columbia’s Nico Rodriguez, the top seed and the defending champion who beat Kearney 2-0 in the 2020 title match at 220.

Bryngelson said he’s grateful his team has had the opportunity to wrestle this year, despite the fact the number of matches they’ve competed in has been cut by about 40 percent.

“It’s really hard for some of us coaches to realize how fortunate we are, so taking precautions is essential, especially this late in the year,” Bryngelson said. “Normally we go into the state tournament with 50 some matches, but this year we’re going in with 30. We just have to kind of take it one day at a time.”