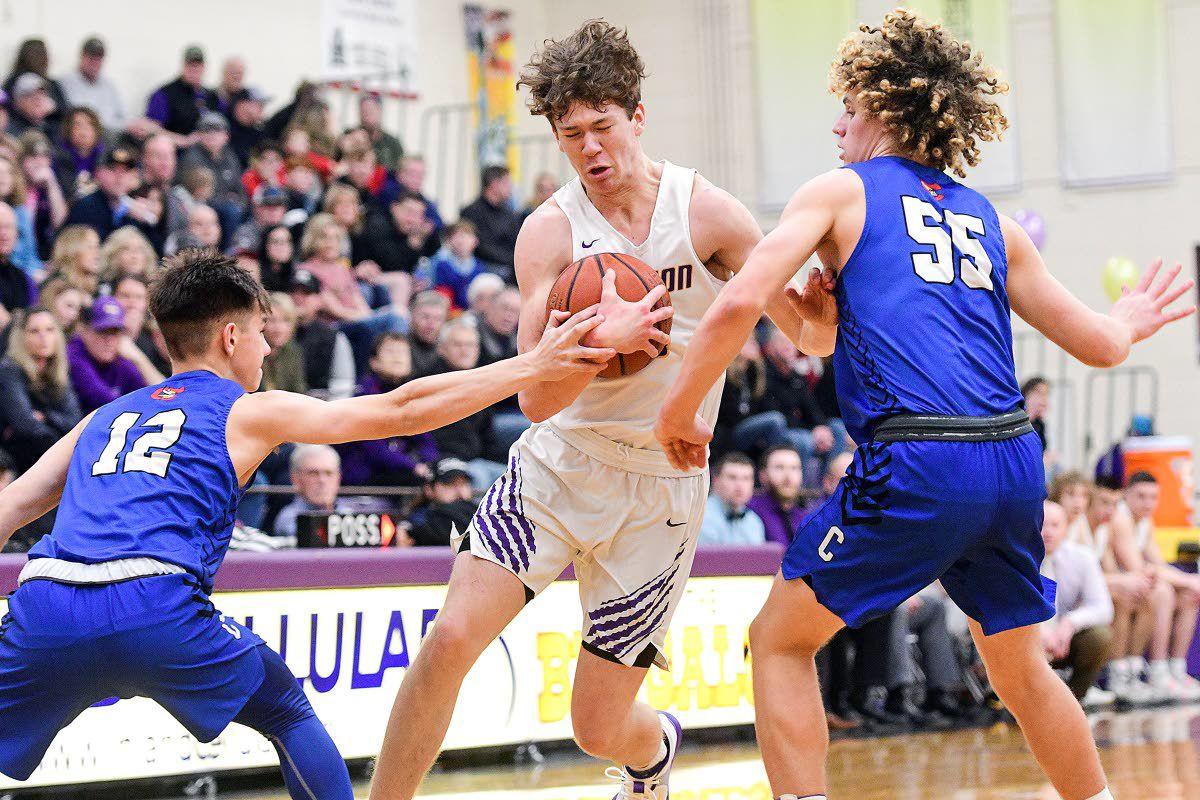 Lewiston guard Kash Lang drives to the basket between a pair of Coeur d’Alene defenders during the second quarter of a 5A Inland Empire League game Friday at Booth Hall. Lang finished with eight points for the Bengals. 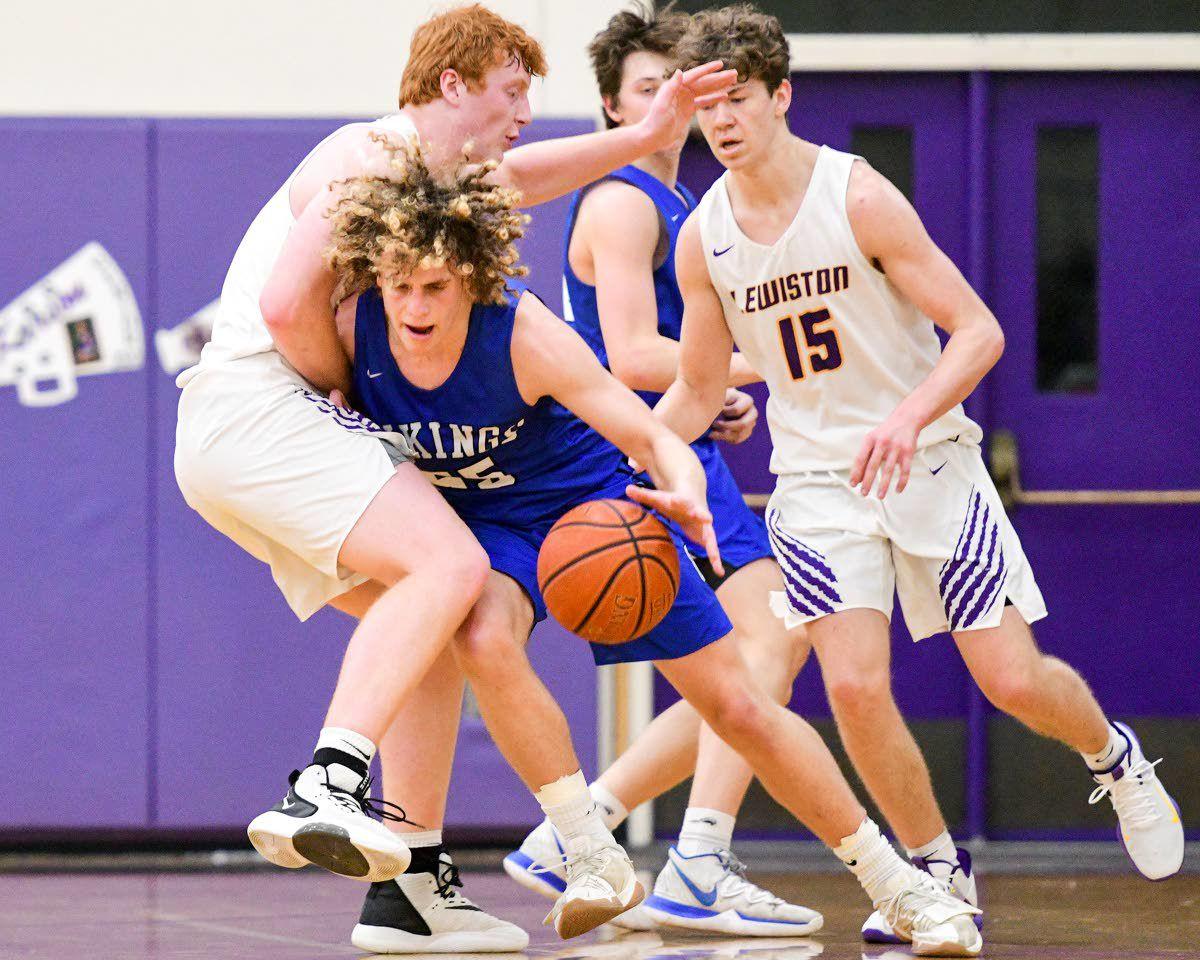 Lewiston&#x2019;s George Forsmann defends as Coeur d&#x2019;Alene&#x2019;s Luke McLaughlin attempts to dribble toward the center of the court late in the fourth quarter of a 5A Inland Empire League game on Friday evening at Booth Hall in Lewiston.

Lewiston guard Kash Lang drives to the basket between a pair of Coeur d’Alene defenders during the second quarter of a 5A Inland Empire League game Friday at Booth Hall. Lang finished with eight points for the Bengals.

Lewiston&#x2019;s George Forsmann defends as Coeur d&#x2019;Alene&#x2019;s Luke McLaughlin attempts to dribble toward the center of the court late in the fourth quarter of a 5A Inland Empire League game on Friday evening at Booth Hall in Lewiston.

When Coeur d’Alene’s boys’ basketball team earned its second lead of the night with four minutes remaining in the game, it was time to stall it out.

The Vikings, knowing neither team had been all too effective on the attack, played an efficient game of keep away, lasting three minutes. It took some air out of Lewiston.

The Bengals only had two more possessions after that Friday at Booth Hall, en route to a 34-33 loss to 5A Inland Empire League rival Coeur d’Alene.

“You expend a bunch of energy doing that, and when things don’t work your way, you get a little deflated,” Lewiston coach Jayson Ulrich said of the Vikings’ long possession.

After the Bengals’ Chanse Eke forced a turnover, finally ending the Vikings’ drain-the-clock strategy, Joel Mullikin put in a tying putback with 40 seconds to go. Coeur d’Alene’s Devon Johnson followed with a go-ahead layin on a tough drive.

On a last-ditch effort, Lewiston’s Jace McKarcher drove and drew a shooting foul with 0.9 seconds on the clock. He split at the line.

“It wasn’t overly exciting,” Vikings coach Tony Hanna said of the offensive slog of a game. “In fact, the refs said they wanted to put in a shot clock at the half. But sometimes, that’s how it’s gotta be.

“We knew if we kept it close toward the end of the game, we were gonna have a shot.”

The Bengals, after a game tonight at Lakeland of Rathdrum, will have a week to prepare before welcoming the Vikings back to Booth Hall for a district tournament matchup on Friday.

“The moment I told the kids that, they were excited,” Ulrich said. “We could get a little redemption.”

Johnson led all players with 12 points and Coeur d’Alene’s Mayson Whittaker rounded out the double-digit scorers with 11 points, six of them coming on clutch consecutive 3-pointers, which boosted the Vikings to their late lead.

Just more than a minute before Coeur d’Alene began sitting on the ball, the Bengals earned a game-high lead of seven points when Braydon Forsman faked out a defender and scurried down the baseline for a floater. Afterward, Lewiston didn’t score for four minutes.

“Like I told my guys, ‘It’s on me, I’ll take that,’” Ulrich said. “I gotta find different ways for us to score. I want their confidence up. There’s not a guy on the team I don’t want to shoot out there.”

Cruz Hepburn topped the Bengals with nine points, Kash Lang added eight, Mullikin tallied three blocks and George Forsmann tacked on six points, but was keyed in on through much of the night with 6-foot-4 standout Coeur d’Alene forward Cameren Cope out with illness.

“We were definitely undersized tonight, and we figured it’d be a little more of a grind game,” Hanna said. “Our whole goal was to keep the ball out of (Forsmann’s) hands, throw a couple of different defenses at them, keep them uncomfortable.

“(The Bengals) have really good shooters, they just didn’t shoot as well as I’m used to seeing.”

Lewiston maintained a slight lead throughout as Coeur d’Alene continued to settle for hurried 3s (3-for-10), six of which missed the rim. Much of that took place during the second quarter, but the Bengals couldn’t take advantage — they didn’t tally any points in the frame until about five minutes had passed.

The Bengals revved up early in the third, but Hanna again altered his team’s defense — which he’d been doing all night — to slow the game down and temper Lewiston’s momentum.

The Vikings chipped away incrementally until they found that opportunity to bring the game to a halt, and eventually hold on to claim an upset win.

“We just couldn’t get clean looks,” Ulrich said. “You have nights like this sometimes, and unfortunately, it was tonight in a big game.”