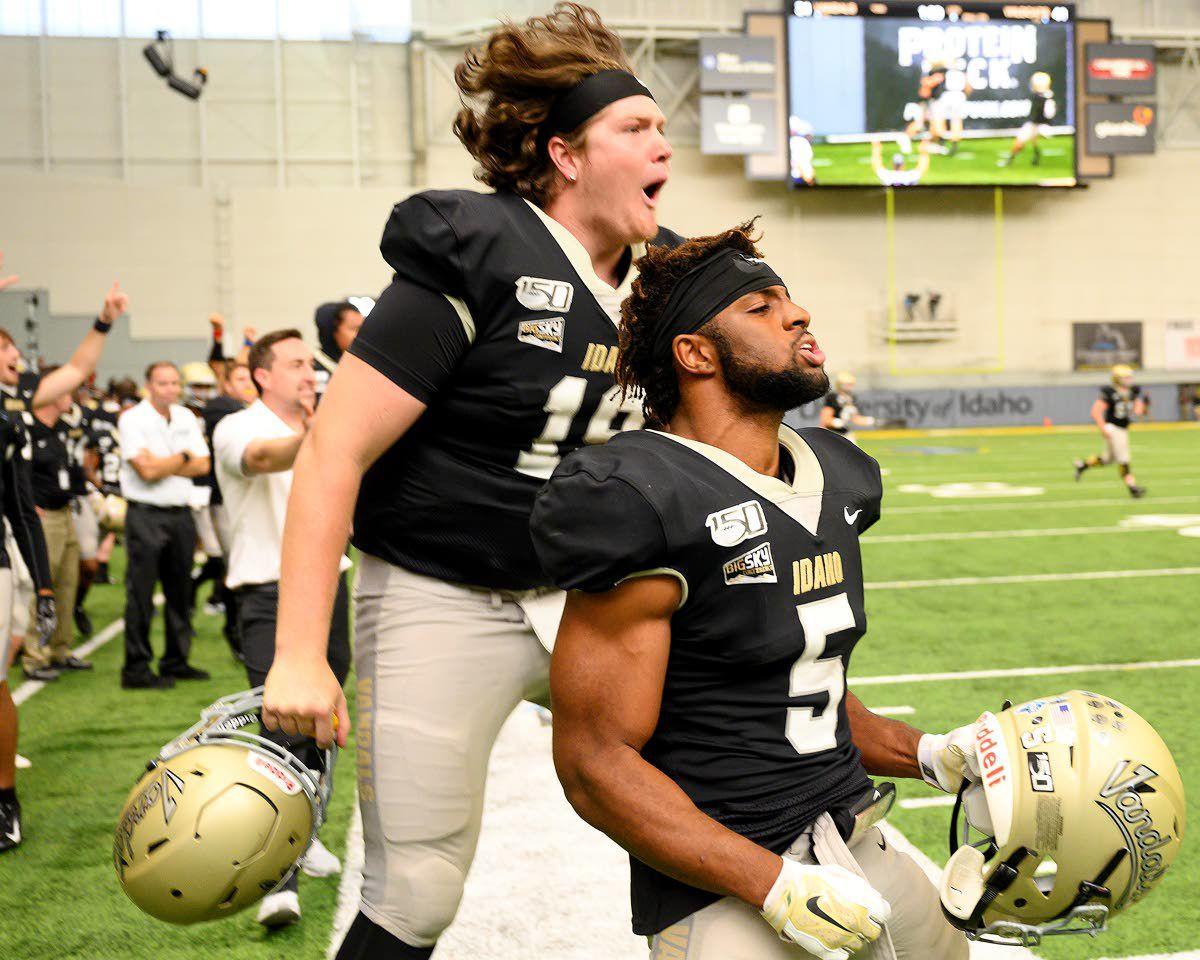 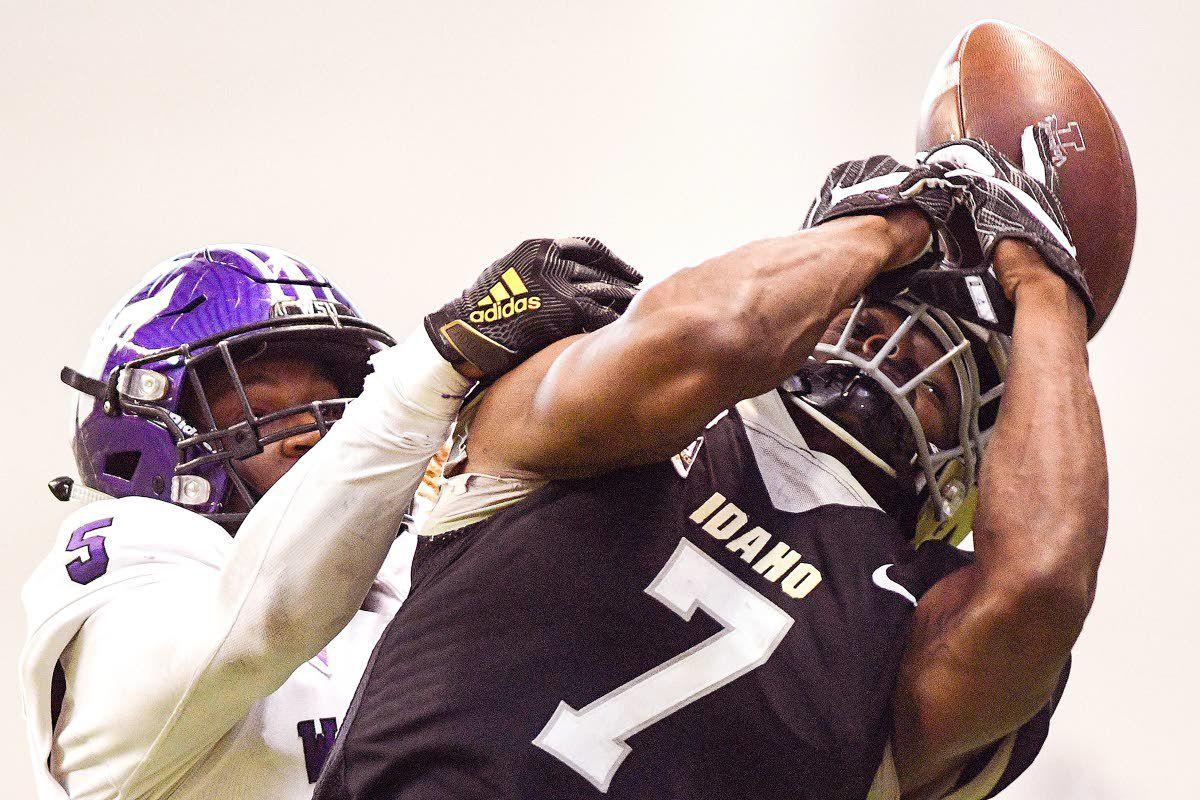 Idaho wide receiver Cutrell Haywood (7) attempts to catch a pass as Weber State cornerback Eddie Heckard (5) defends during the third quarter of a Big Sky game on Saturday afternoon at the Kibbie Dome in Moscow. 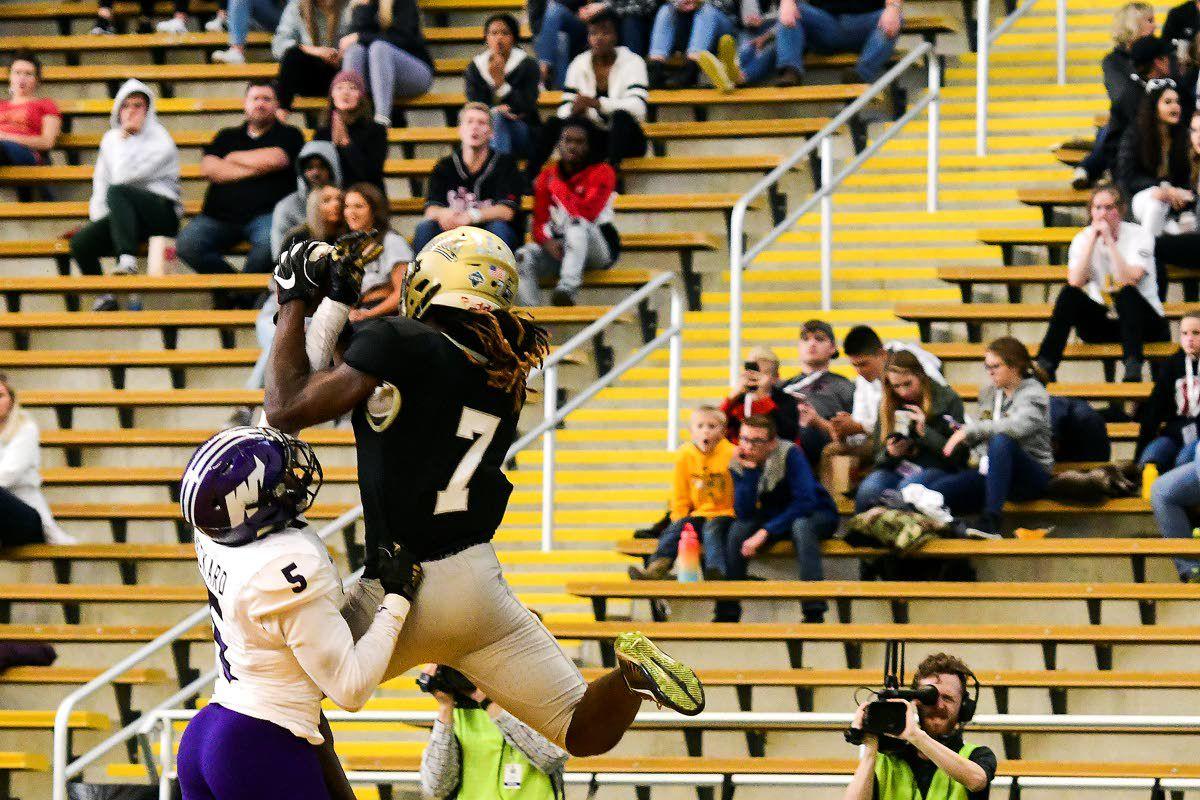 Idaho wide receiver Cutrell Haywood (7) attempts to catch a pass as Weber State cornerback Eddie Heckard (5) defends during the third quarter of a Big Sky game on Saturday afternoon at the Kibbie Dome in Moscow.

MOSCOW — On Bruce Barnum’s step-by-step chart of what to and what not to do when his Portland State football team plays host to Idaho, No. 1 is to evade that initial snare it fell into a year ago.

“I’ve never been a part of a first quarter like that; it felt like 27 minutes,” said the fifth-year coach, recalling the tone-setter in UI’s eventual 20-7 win in September 2018. “And their defense just got after us. They’re a very physical group.”

And their offense did everything it could to keep the Vikings’ youthful, springy skill players on the sideline, stamping down their gusto.

The Vandals sat on the ball for 12 minutes, gave PSU quarterback Davis Alexander a few licks, then continued to do both, only scoring what few points were needed to slip by, seven of them coming on a blocked punt returned by Lloyd Hightower.

It was a case of similarly skilled teams, but one executed its game plan — drain the clock with chip-away ball and knock some early wind out of the opponent’s green players — efficiently enough.

“They’ll have morale up, especially after last year. I’m guessing they’ll come in with a lot of confidence ’cause they throttled us at the Kibbie Dome,” Barnum said. “Their defense is better than last year, but so are we on offense.”

Now, Idaho can’t rely solely on the advantage it had last season: a broad experience gap between its defenders and PSU’s offense. The Vikings have matured, and they’ve become an also-ran almost akin to the Vandals.

But for the first time in the short history of this matchup, Portland State is favored. 5Dimes has the Viks as 1½-point favorites.

“I just think they’re more comfortable,” Vandals offensive coordinator Kris Cinkovich said. “A handful of guys that played for them a year ago look like they’ve gotten to know the scheme a bit more.”

That scheme is a replica of the “Desert Swarm,” a five-front “flex” defense run by Arizona in the early 1990s. UI coach Paul Petrino, however, is familiar with it — Utah State’s defense applied the same design when Petrino was an assistant there under John L. Smith in the mid-1990s.

Practically speaking, it’s designed to open lanes in the trenches for speedsters to rush in unscathed.

“They’ll try to do some different things with it, though, some things I haven’t seen,” Petrino said. “Little wrinkles here and there.”

PSU’s front seven is its strongest facet to combat for UI, which could be without running backs Aundre Carter and Roshaun Johnson, both of whom had limited practice reps this week. Also questionable is standout receiver Jeff Cotton, who’s fifth in the nation with 104 yards per game.

With perhaps a limited roster, the Vandals find themselves in a sticky, must-win situation against a shaky league team they never have had much trouble with, but now will need a complete effort to get by. In fact, Portland State owns the Football Championship Subdivision’s No. 1 recruiting class, according to 247Sports.com.

Really, neither group can afford another loss if they want to keep their postseason hopes intact.

“I thought our guys practiced hard last week, and I thought we were ready to play,” Petrino said. “What we gotta make sure is that we do that again, and make it even better. Can’t have a letdown.”

Despite the Vikings’ slew of three-star recruits from the prep and juco ranks, their offense appears much the same. A lot will be riding on UI’s secondary, which sits in the lower echelons of Big Sky play in terms of efficiency.

Portland State has five receivers with more than 200 yards, and all of them are mainstays. Couple that with a proficient quarterback on the run in Davis Alexander, and UI’s DBs must find reprieve from a front seven tasked to rattle the budding signal caller, who manages an offense that racks up 457 yards per game on a “50/50” mentality, Barnum said.

As a whole, the Vandals must hope they can find some fervor on the road, where they’ve yet to win a Big Sky game and are 0-10 overall since the start of 2018.

Considering PSU almost beat Arkansas from the Southeastern Conference, UI will need an enhanced showing from last year, but a replica of that first quarter couldn’t hurt.