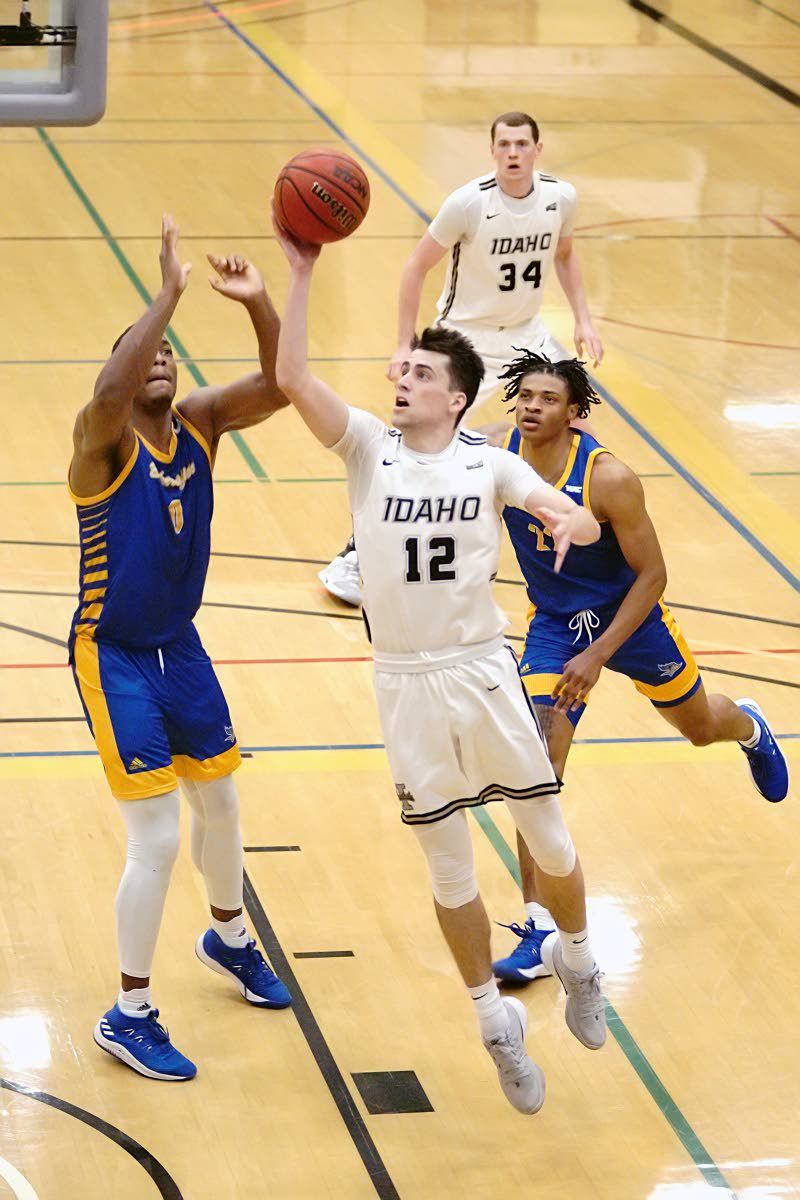 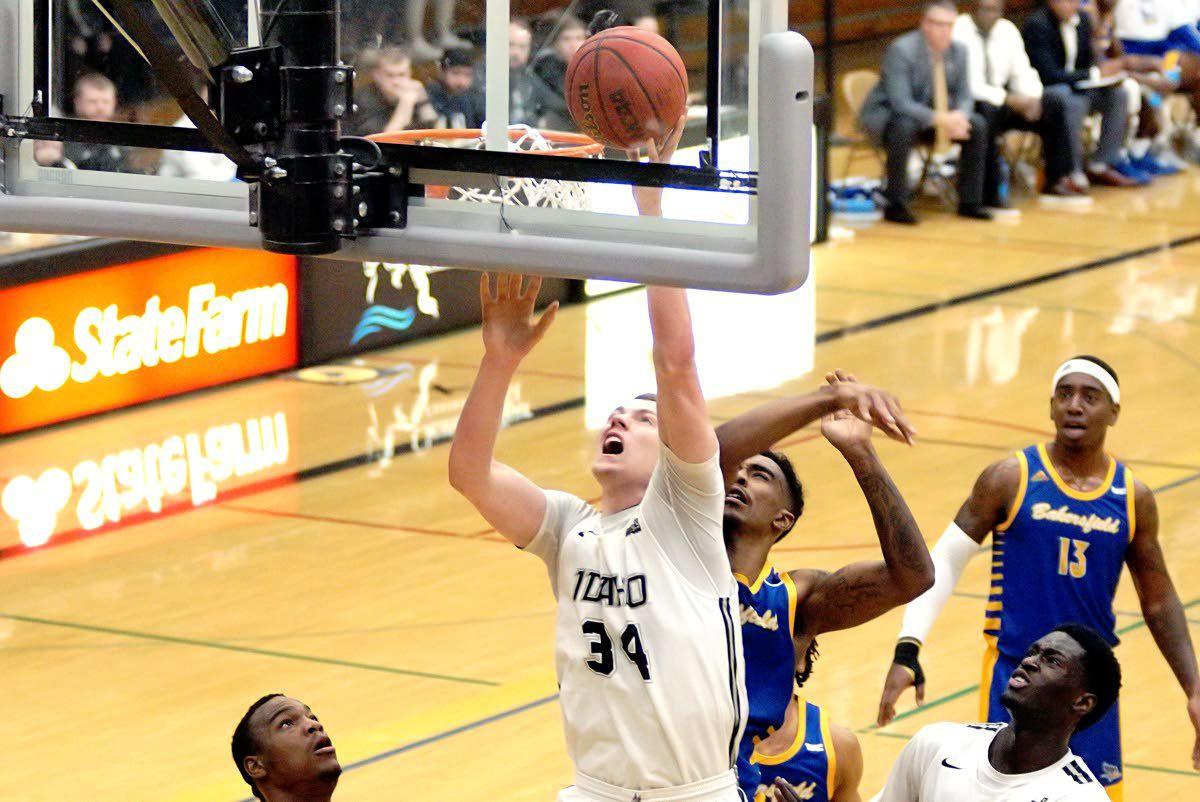 The basket put the Vandals ahead by three points in overtime and Idaho held on to top Cal State Bakersfield 76-70 on Saturday at Memorial Gym.

The win arguably was the biggest for Idaho men’s basketball in more than two seasons, and it ended a three-game drought against Bakersfield going back to 2017, when the Vandals (4-6) lost to the Roadrunners (4-8) twice in the same season.

“Beyond excited for our guys more than anything,” Idaho interim coach Zac Claus said. “We talked nonstop about how good Cal State Bakersfield is, how relentless they are on the offensive glass and what a quality opponent they are.

With only eight healthy bodies, every available Vandal was called into duty.

But it was a trio of veterans that led the way in Allen, junior forward Scott Blakney and junior guard Chance Garvin. All three had been on the losing end of the past three games vs. the Roadrunners and all three contributed big minutes for Idaho in this one.

Allen led with a game-high 23 points, including a game-tying free throw in the waning moments of regulation. Blakney battled with the Bakersfield bigs in the paint, picking up 13 points on 50-percent shooting from the floor. And Garvin provided 16 points and a 4-for-4 mark from 3-point range.

“All three of those guys answered the bell,” Claus said. “They’ve been around this program, they’ve seen good days and bad days. They know what it takes to win. For all three of them to contribute in such a positive way was fabulous ... we’re lucky to have all three in our program.”

In a game with 16 lead changes and eight ties, there was hardly a dull moment for the 956 raucous fans in attendance.

Idaho built its largest lead of 11 points late in the first half, when Garvin came off the bench to drill three 3s in a span of 91 seconds, the last of which put the Vandals up 30-19.

But the Roadrunners closed out the half on a 16-5 run to cut Idaho’s lead to 35-34 heading into the locker room.

The second half was more of the same: gritty half-court defense by both teams with neither one allowing an easy bucket or a chance to garner a comfortable lead.

Bakersfield seemed to grab the momentum after an alley-oop by Justin McCall put the Roadrunners up 61-55 with 2:23 to go. But UI bounced back with back-to-back layups by Blakney, including a traditional three-point play that cut the lead to one.

Again down one with 11 seconds left, Allen missed his first free throw before making the second to tie it at 63. Taze Moore’s dunk attempt was short on the other end and the teams headed to overtime.

The Vandals took a hit when Blakney picked up his fifth foul just 35 seconds into overtime — leaving Idaho with seven players and Allen with four fouls himself.

But it didn’t matter.

“The bench was full-on support, the energy was there from the fans and they believed in us to finish out the game,” Allen said.

Forrest added 11 points and eight rebounds and Dixon had four assists, none sweeter than his 30-foot pass to Allen.

In many ways, Idaho’s season has paralleled its 2018-19 campaign as the Vandals have a host of new players and again have been hit with the injury bug. But this season’s Vandals already have four wins — one short of last season’s total.

“I think a lot of guys are buying in,” Allen said. “This is a group of guys that I know for sure have my back even after basketball. So I think that’s a huge piece.

“Everyone is out there playing for each other.”

The 7-foot center joined UI in the spring and can start play after the semester closes next week, per NCAA transfer rules.

Claus said they’ve been counting down the days until Wilson can play.

“He has worked as hard as anybody in this program to get himself ready,” Claus said. “We have had a daily countdown where ... we talk about a number, we text each other at night and we’re now down to six days (until he can play) hopefully as long as everything finishes up the right way school-wise.”

WALKING WOUNDED — Wilson’s presence will be a huge boost to a team with only two players taller than 6-6 (6-8 Blakney and 6-7 Thiombane).

Claus is tight-lipped about injuries but several Vandals have missed time this season, including Marquell Fraser, BJ Simmons and Ja’Vary Christmas, who was seen in a walking boot. All three were on the bench in street clothes. Three others — AJ Youngman, Khadim Samb and Michael Hanshaw — have not yet seen the floor this season. That makes almost as many ineligible players on the bench as available ones.

Claus said none of the injuries are expected to be season-ending.

“We’re working on it,” he said. “We keep waiting that X-rays show that bones are healing. We keep wearing out Justin Pomar, our terrific trainer.

“He’s working above and beyond and making sure our guys are getting back.”

Stephan Wiebe can be reached at swiebe@dnews.com and on Twitter at @StephanSports.