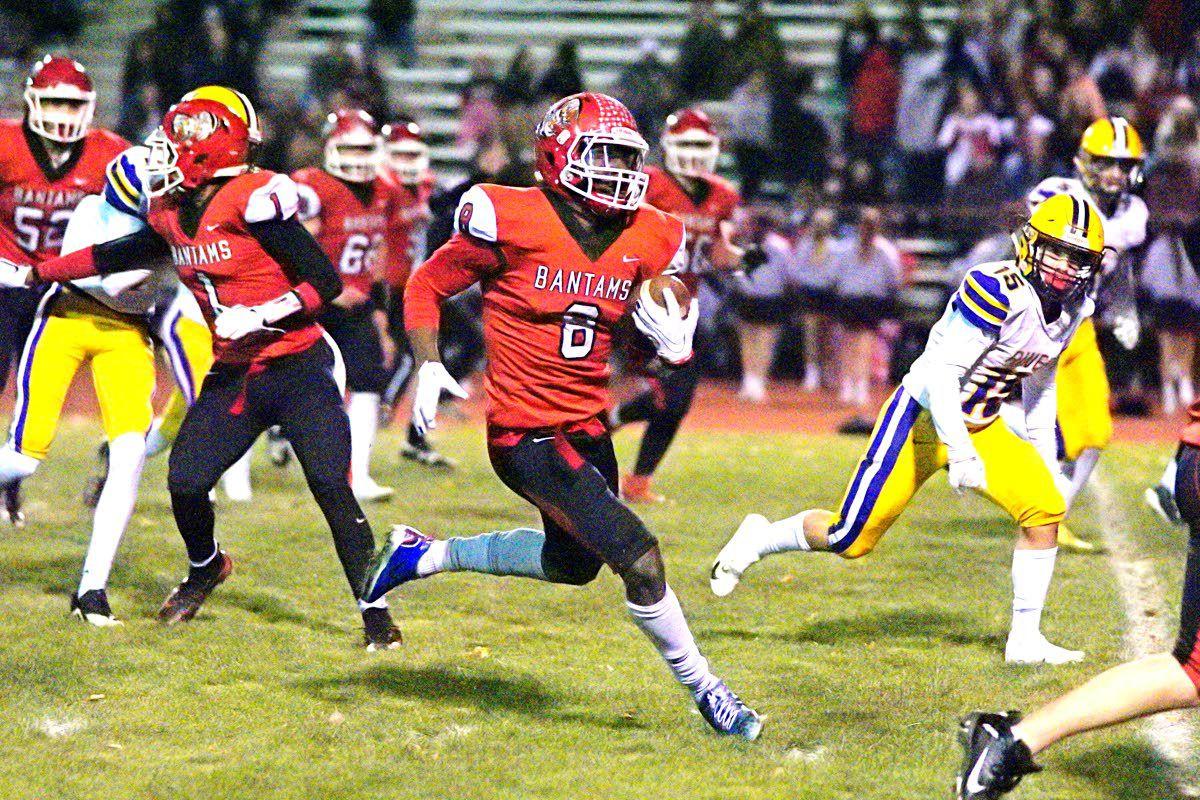 Moscow-Pullman Daily NewsSteve Baiye romps to a touchdown for Clarkston High last November in a home game against Columbia River. 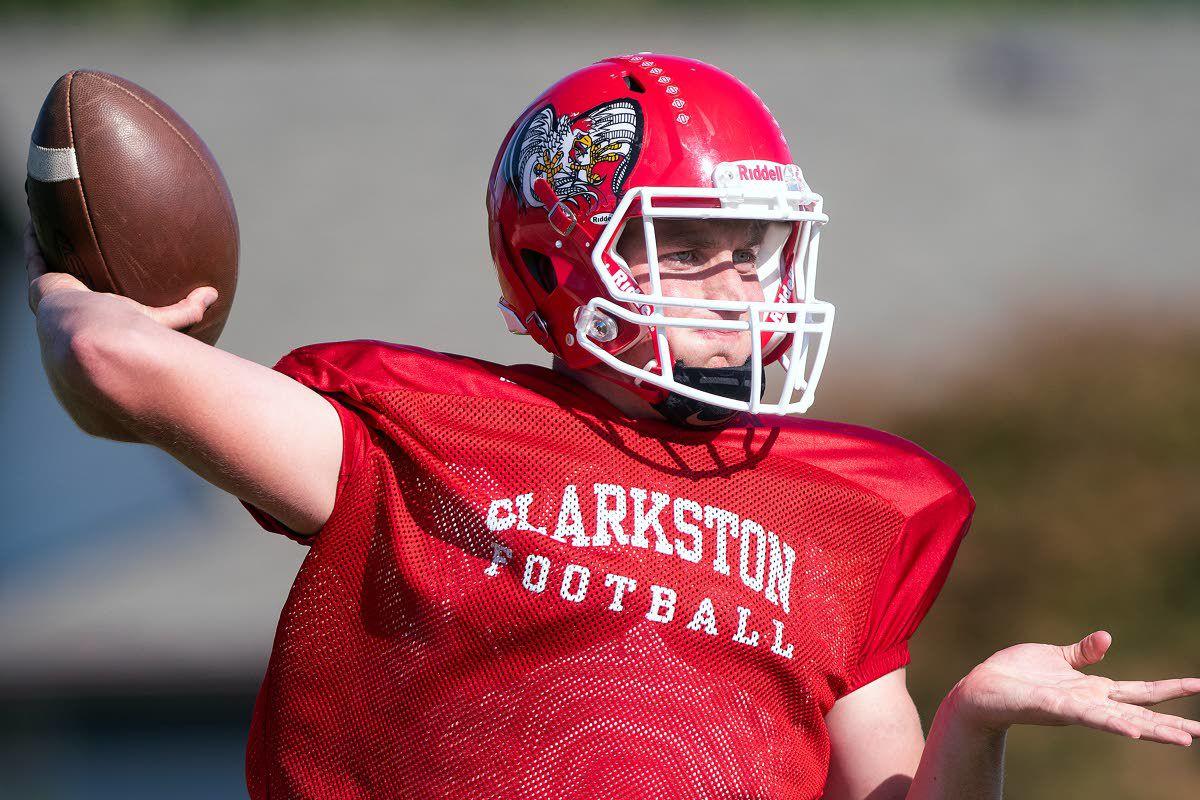 Moscow-Pullman Daily NewsSteve Baiye romps to a touchdown for Clarkston High last November in a home game against Columbia River.

Kaeden Frazier, then a lanky incoming freshman quarterback at Clarkston High, pulled Bantams coach Brycen Bye aside one day during the summer.

“I always tell kids to let me know if they want to play college football,” Bye said, “and he made that his goal. He looked me in the eye and said, ‘I’ll work to make it happen.’ He backed his words up.”

About two years later, a relative newcomer to Clarkston from Cameroon also made it apparent that he had collegiate prospects. Steve Baiye, on his first-ever varsity kickoff, booted the football through the end zone, and clunked it off the goal post.

“‘Oh my gosh, did that just happen?’” remembered Bye. “He has a God-given gift for kicking the ball. I’ve never seen a guy who can kick it like he does, and as a receiver, he’s really turned into an explosive athlete.”

Come fall, both Bantams will realize their Division I dreams when they suit up for the Vandals of Idaho. Each took preferred walk-on offers this year from offensive coordinator Kris Cinkovich.

“It’s really a cool thing that we’re going up there together,” Frazier said.

Frazier, the Great Northern League’s co-offensive MVP as an unshakable senior, has had his intentions set for a while now.

Beginning his sophomore year — when he first made varsity — he has toured the Northwest along with some contemporary Vandals on Spokane Bulls 7-on-7 teams, and he’s honed himself under Post Falls QB guru Craig Shaver, with whom Frazier still trains.

“Getting a little antsy, too.”

He’s thrown well against elites at events in Las Vegas, Seattle and Portland, among others. Frazier tossed a touchdown on a comeback route last year in Vegas against four-star Florida State cornerback Akeem Dent.

“That was surreal, like, he was a top recruit in the nation,” Frazier said. “(7-on-7) was the closest thing to a real game for a QB in the offseason. And it definitely helped me with recruiting. Going to camps, some people would know who I am.”

For the past two years, the CHS valedictorian has added agility in his sessions with local mixed martial artist Austin Arnett. Frazier’s career thus far has been defined by annual, marked improvements — both in his physical development and from a mental standpoint.

“He’s just a tireless worker,” Bye said. “He’s very physically talented, but it was more of the continual effort he put in.”

As a freshman, Frazier checked in at around 6-foot, 140 pounds. Now, he’s 6-3, 215. The pro-style signal-caller prefers slinging it from the pocket, but can run over a linebacker on an RPO if need be. His time on Justin Jones’ basketball squad was key in his versatility.

“My size, that’s an intangible, and I’d say my arm strength,” Frazier said of his top traits. “And I’m more into the playbook, with making reads. I pride myself on knowing the offense better than anyone else. And my mentality, I play the game calm and try to slow everything down.

“I think I fit well (at UI), because I can learn the playbook quickly, and I’ll make smart decisions.”

Bye said the “light bulb clicked” late in Frazier’s junior year, with the Bantams sitting on a 2-4 record. Frazier began to play more freely, and proceeded to guide Clarkston to four straight wins, passing for 10 TDs against one pick.

That encouraged Cinkovich — who’d been keeping Frazier on his radar since a Spokane Showcase in 2017 — to make the trip to CHS on a school day, and have Frazier called into the office.

“He told me he thinks I’d be a good fit, that he could see me playing there,” said Frazier, who had interest mostly from Frontier Conference teams, but worked out for Eastern Washington once. “I was stunned. I get to play D-I football. That’s every kid’s dream.”

As a senior, Frazier threw for 31 TDs against nine interceptions, finishing his career with 5,609 passing yards, 61 scores and a 2019 GNL title by way of a 9-2 record.

“I was a whole different player,” he said. “It was because of all the extra work, with my QB coach, and Austin. I got stronger and more comfortable. It all built up.”

Frazier will take a pre-med major in hopes of becoming another in his family of doctors. When he departs in August, he’ll join his golfer sister, Grace, as a Vandal athlete. Frazier, already wont to despise Boise State and Idaho State, has been studying UI’s schemes intently. His focus is on earning a scholarship.

“I’m ready to start the next chapter,” he said. “I’m going to control what I can, grind and trust the process.”

Baiye hadn’t touched a football until he was a freshman, prompted to try it out by his older brother, Theo. On the Bantams’ C team, Steve was a reserve — collegiate soccer seemed to be his direction.

“When I started, I didn’t know anything, and that kept me from playing,” said Baiye, who moved with his family to the valley from Africa in middle school. “But I started learning plays, and I started getting it.”

Baiye concluded that his odds to play at a higher level were simply better in football. He would likely have had to start out at junior college in soccer.

He’d had an eye-opening conversation with Cinkovich, and his Clarkston peers who nudged him toward the sport. Last fall, after viewing some footage Bye had sent, Cinkovich pulled the trigger.

“When he gave me the offer, it’s not like he was promising a spot, but he said I have a chance to play,” Baiye said. “Since junior year, people told me I could play for a D-I school. But I hadn’t really picked up on it yet.”

Baiye stands 6-foot and weighs about 180 pounds. He’s exceptionally coordinated — priding himself on route-running — and has been clocked at 4.5 seconds in the 40-yard dash. The first-team all-leaguer compiled 1,242 yards and 13 touchdowns on 78 grabs in two years.

And considering the circumstances, Baiye’s football IQ has developed at an astonishing pace.

“He’s really come into his own,” Bye said. “He’s grabbed onto everything we’ve taught him.

“Steve has a carefree personality, but you’re not gonna find a more competitive guy. He has that switch to turn it on.”

Baiye, who had some recruiting interest from Montana State and EWU, was mostly scouted by UI for field goals and kickoffs. The Vandals are known for producing All-America-caliber legs, with incoming senior Cade Coffey being their most recent.

“It’s all been pretty natural for him, so I’m excited to see what happens when he has a kicking coach,” Bye said of Baiye, who once nailed a 63-yarder in practice.

Cinkovich hinted that Baiye will get a stab at proving himself as a pass-catcher, given his athleticism — much of which came from soccer.

“I know it’s gonna be hard, but I feel like, if you know that, it won’t be as troubling,” said Baiye, who’s been augmenting his strength and size with local trainer Nathan Hoffmann, and traveling with Frazier for guidance from Shaver.

“Both those guys have really worked their tails off,” Bye added. “They’ve developed a lot every year, and they continue to improve. With (the Vandals), part of it is the athletic ability, and the other is sending good people their direction. A lot of being a walk-on is earning your way, and they’ll accept that challenge.”