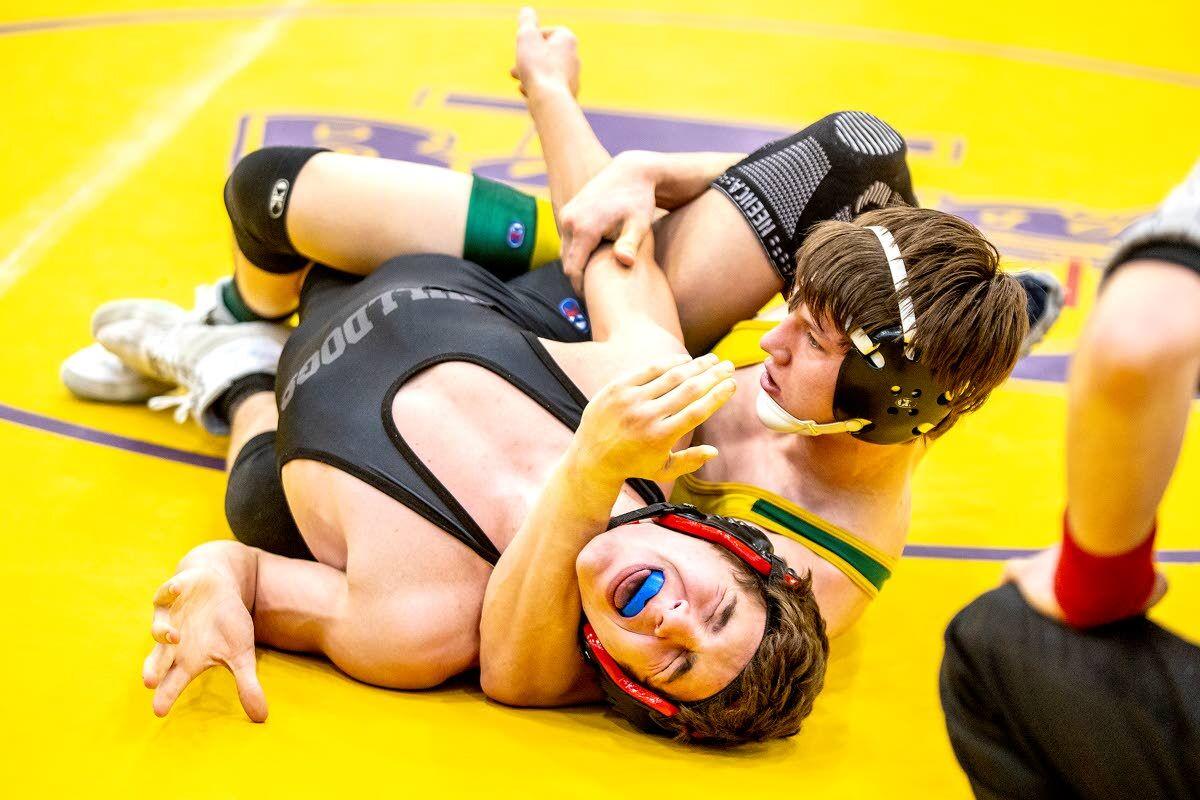 August Frank/TribunePotlatch’s Gabe Prather has Sandpoint’s Darrian Resso locked up in the third period of their match at the Clearwater Classic at Lewiston High School on Saturday. Prather won all three of his matches during the weekend. 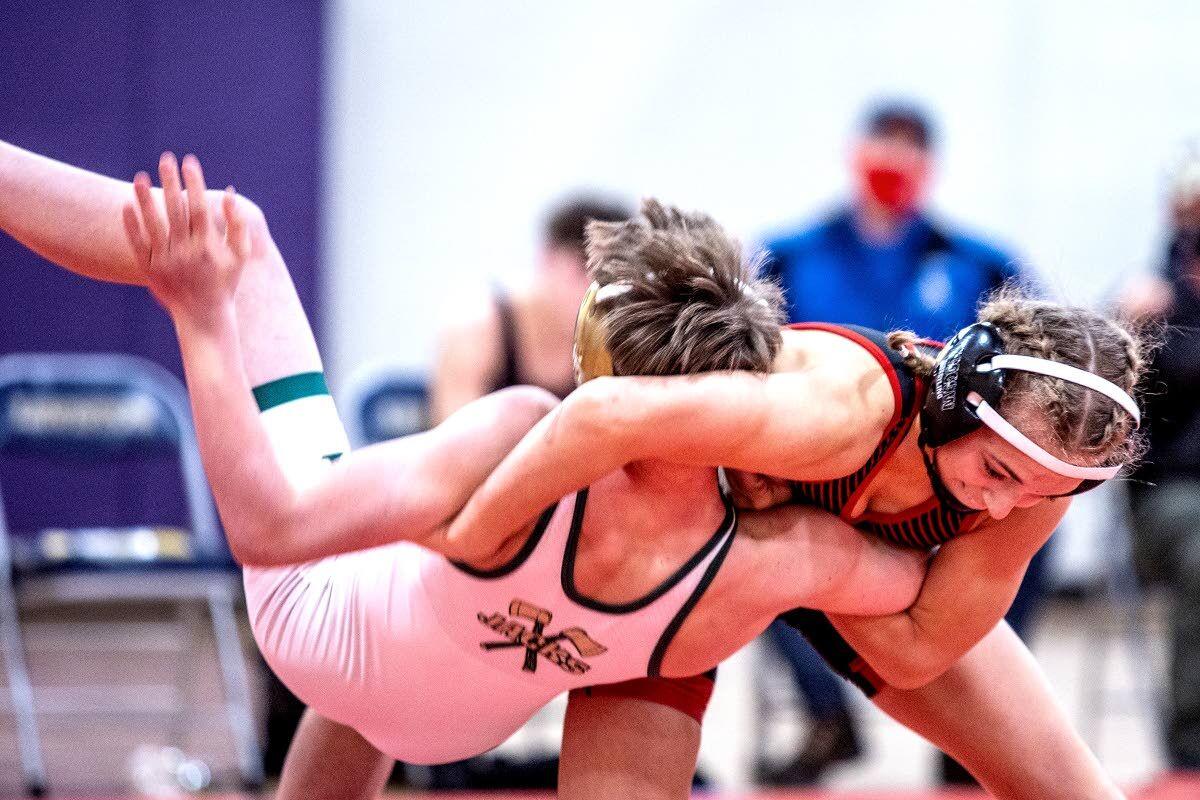 Moscow's Skyla Zimmerman flips St. Maries' Brock Anderson to the mat for a pin in their final round match of the Clearwater Classic at Lewiston High School on Saturday. ,

August Frank/TribunePotlatch’s Gabe Prather has Sandpoint’s Darrian Resso locked up in the third period of their match at the Clearwater Classic at Lewiston High School on Saturday. Prather won all three of his matches during the weekend.

Moscow's Skyla Zimmerman flips St. Maries' Brock Anderson to the mat for a pin in their final round match of the Clearwater Classic at Lewiston High School on Saturday. ,

There were major changes in the venue and format for the 35th annual Clearwater Classic conducted at the new Lewiston High School in the Orchards on Friday and Saturday, but key names in area high school wrestling were happy to return and get in their first tournament action of the season.

Moscow’s Skyla Zimmerman (4-0), Xzavier Brown (4-0) and Logan Kearney (5-0); Potlatch’s Gabe Prather (3-0) and Taylor McPherson (5-0); Lewiston’s Reuben Thill (5-0) and Clearwater Valley’s Anthony Fabbi (6-0) each went undefeated in individual competition, although weight class titles were not allotted since the event utilized team duals (structured to limit the number of teams exposed to one another as a coronavirus precaution) instead of individual brackets. In team competition, Lewiston placed fourth overall and first among area schools, buoyed by four dominant victories and one forfeit win from Thill, who was the individual champion at 182 pounds last year and wrestled at 195 this time. Coeur d’Alene took top team honors this year, followed by Weiser and Kellogg.

“We had a lot of kids that did well, but we also succumbed to a lot of injuries,” Lewiston coach Stuart Johnson said. “We wound up in the top four team-wise, but couldn’t really crack that top four because we ended up giving up a lot.”

With the event winding down, Prather, a returning Class 1A state finalist at 145 pounds, wrapped up his unbeaten run with a notable showdown on the main floor against Sandpoint’s Darrian Resso. On paper, it had potential to be competitive, as Resso was also was undefeated in the event, and the dual between the teams was tight. But Prather dominated, almost continuously holding the top position and piling up points as he applied vise-like pressure to Resso’s limbs from behind. Resso looked questionable as he got up limping heavily with Prather leading 9-1 after two periods, but Resso was game and held out through the third to become the only Clearwater Classic opponent to take Prather the distance.

Prather’s 14-4 decision victory helped the Loggers squeak out a 43-42 team win against Class 4A Sandpoint.

As Prather was finishing his business on the main floor, Bear girls’ standout Zimmerman squared up on an adjacent balcony to face St. Maries’ Brock Anderson at 106 in one of the final matches of the weekend. It was her second time taking to the mat (she also won twice by forfeits) during the event, and it would end in her second first-period dismissal of a male opponent. Zimmerman and Anderson spent a few moments upright on even terms as they pushed one another back and forth before she caught him off-balance and achieved a 59-second pin that was set up with a distinctly martial-arts-esque throw.

The resemblance to another form of wrestling was not coincidental.

“I’ve had a bigger background in judo, so that really helped with this match,” Zimmerman said.

Now a brown belt, Zimmerman took up judo at the age of 4 under the tutelage of her father and sensei Derek. Several years later, her grandfather, George Germer — who worked as a wrestling referee — had the idea to see how her talents crossed over.

“He kind of got me into wrestling, thinking that I’d be good at it,” she said.

Zimmerman has since won seven girls’ tournament titles, and defeated a field of boys for a Class 4A district title to earn a state berth last year.

“Skyla’s always fun to watch — don’t push into her,” Moscow coach Pat Amos said. “She keeps getting better and better.”

While the field lacked some of its usual notables from Washington because of the delay to the high school season, coaches and athletes alike expressed satisfaction with the competition and the chance to build tournament toughness.

“It was pretty exciting,” Johnson said. “A lot of hard wrestling. Everybody seemed to be enjoying the tournament, so that’s always a good thing, as far as trying to host something.”