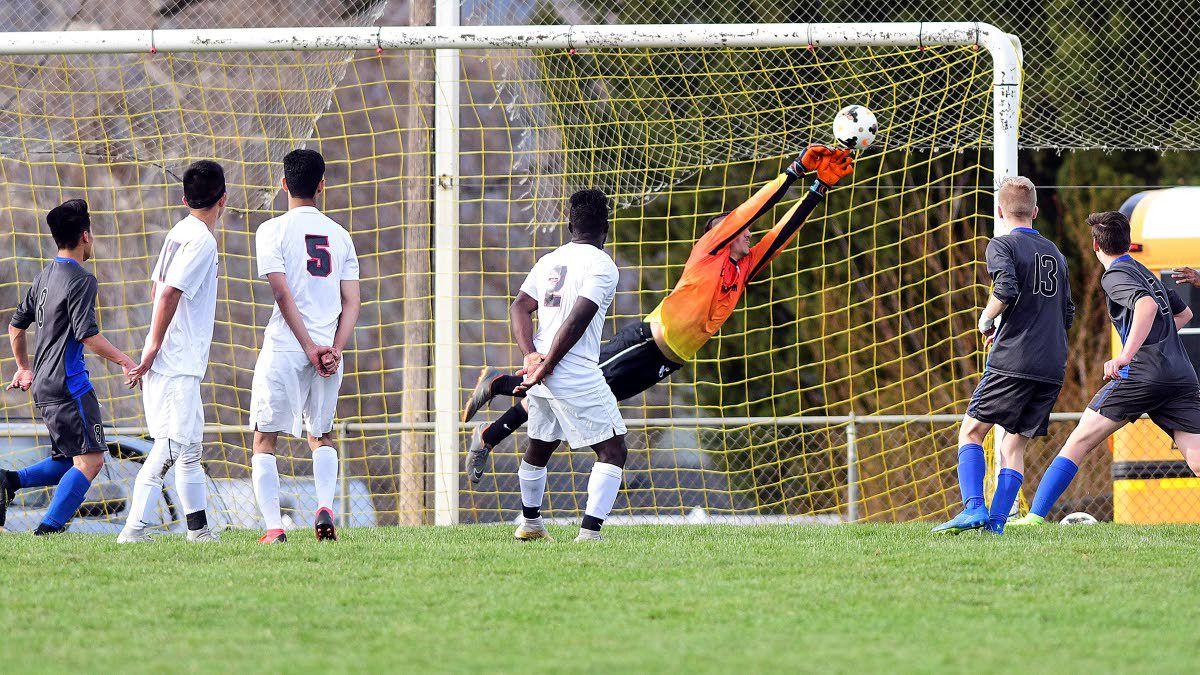 Pete Caster/TribuneClarkston HIgh goalkeeper Alessandro Italia deflects a free kick during a soccer game against Pullman in March 2019 at Walker Field in Lewiston. Italia has signed a letter of intent with Peninsula College in Port Angeles, Wash. 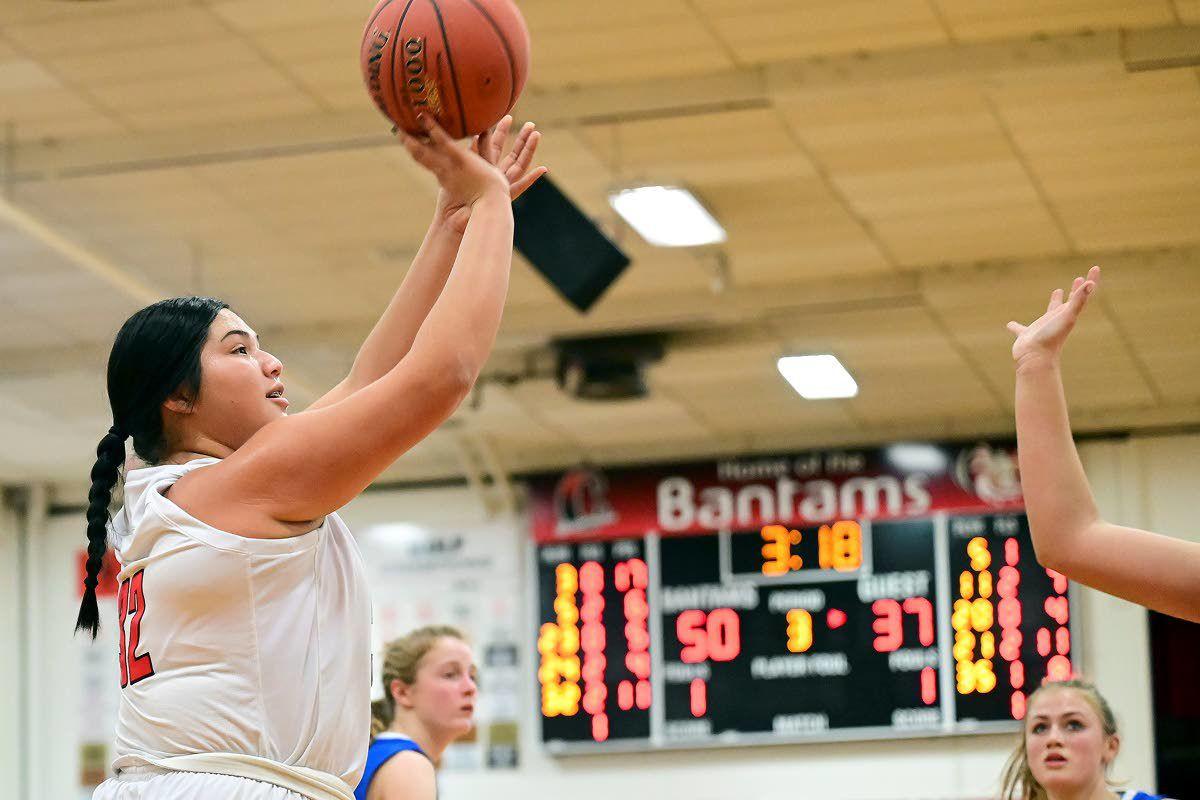 Pete Caster/TribuneJalena Henry of Clarkston shoots from the baseline against Pullman in a game at Clarkston last December. 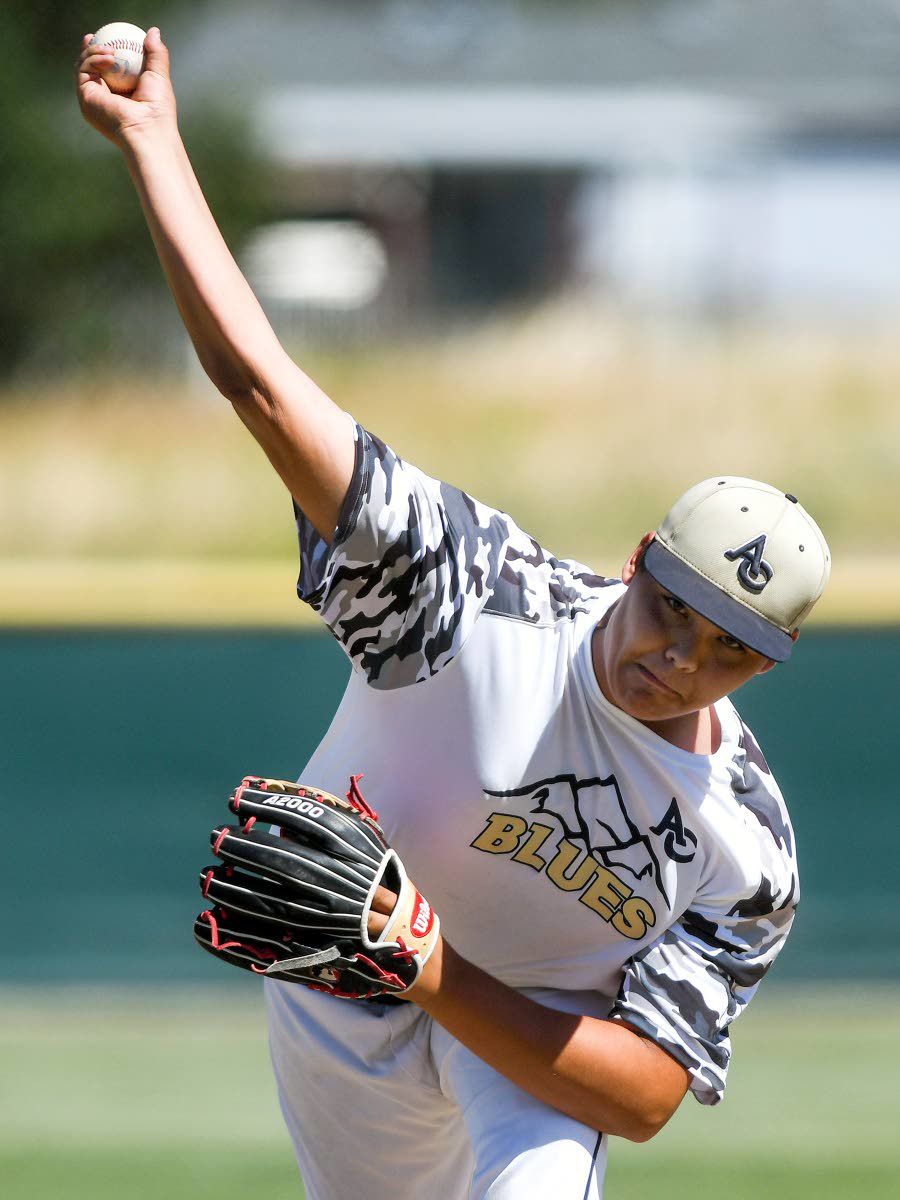 Asotin County's Damon Peace delivers a pitch to a Mead batter during the first inning of an American Legion game at Pryor Field in Clarkston on Tuesday afternoon.

Pete Caster/TribuneClarkston HIgh goalkeeper Alessandro Italia deflects a free kick during a soccer game against Pullman in March 2019 at Walker Field in Lewiston. Italia has signed a letter of intent with Peninsula College in Port Angeles, Wash.

Pete Caster/TribuneJalena Henry of Clarkston shoots from the baseline against Pullman in a game at Clarkston last December.

Asotin County's Damon Peace delivers a pitch to a Mead batter during the first inning of an American Legion game at Pryor Field in Clarkston on Tuesday afternoon.

When it comes to developing collegiate talent, the Bantams seem a step ahead of the game.

Italia a standout in goal

This Bantams’ boys’ soccer team boasted more wins in a stretch of three years than any of its predecessors. At the forefront of one of the Class 2A Great Northern League’s top groups was Italia, who Clarkston coach Corinthia Richert is certain owns the program record for most career shutouts.

“He’s been a captain basically since he was a sophomore,” Richert said. “He’s just a natural leader, and he always says the right things.”

Peninsula has been recruiting the 6-foot-2 shot-stopper since late in his sophomore year, when former Eastern Washington assistant Max Weber watched him at a team camp, then helped spread the word.

Italia took two visits to the school earlier in his high school career, during which he practiced with the team — the defending Northwest Athletic Conference champions who have Italia’s former Clarkston teammate, Theo Baiye, on the roster.

“It actually boosted my confidence a lot in my junior year, knowing I could compete with those guys,” said Italia, who’d improved his stock by participating in top-tier showcase camps at Gonzaga and the University of Washington in past years. “I thought, ‘Maybe this is the place I belong.’”

“He reads the ball very well — he just can sense where it’s going — and he can learn players really quickly, just from watching them,” said Richert, whose 2019 team went 13-6, narrowly losing to Ellensburg in a state play-in game. “He’s quick on the trigger (leaping for saves) quick, but it’s not only that.”

With a 6-5 wingspan, Italia can ward off any shot, from most angles. That’s what Peninsula’s staff was so enamored with. But Italia hangs his hat on his ability to decipher opponents’ tells — like a facial expression, a plant foot or the angle of their approach.

“I think it comes from playing sports so long — not only soccer, but football and basketball too,” said Italia, who started on the Bantams’ state runner-up basketball team this winter. “It’s a defensive mindset. I’ve been through that stuff so many times that I can read what’s going to happen.”

Italia was intrigued by west-side Washington, and on his visits, immediately took a liking to the culture around Peninsula’s program. There, he’ll presumably vie right away for No. 1 on the depth chart. Who’s to say he wouldn’t have been the favored starter if he would’ve had a senior season?

Not a lot of posts follow when Henry drifts outside the key and sets up for a mid-range jumper.

It’s because not a lot of posts can shoot like that.

Henry, a 5-11 senior captain on last season’s girls’ basketball team — which made the state tournament — is known for it. She’ll bring her steady shooting touch and reliable presence as a defender and rebounder to the Seattle area this fall.

“I wasn’t sure if I wanted to continue playing, but the offer came in, and it fulfilled everything,” said Henry, who averaged about seven points and a team-high six rebounds per game last season for the 21-7 Bantams. “I’ve always had a dream to go to college in the Seattle area.”

Henry said Bellevue began ramping up its recruitment of her midway through the 2019-20 season, and had seen her play some of her best games against GNL adversary East Valley.

“They really liked my short jumper,” she said of what she’d heard. “I love getting the ball on the outside too, and taking those jumpers. Some people don’t think I’m a shooter, but low-key, I am.”

“I think they put in some good words for me,” Henry said. “I really liked (Bellevue’s) energy, and how much work they put into contacting me.”

Henry, originally from Lapwai, has been involved in the sport for the majority of her life, playing club ball alongside many of her future Bantam teammates, and under Clarkston assistant Pat Sobotta. She transferred to Clarkston as a freshman, then swiftly became a chemistry cog and a dependable scorer/rebounder in head coach Debbie Sobotta’s build of a tournament contender.

“I’m definitely going to miss all of them,” she said. “I’m just excited for the adventure, getting to know a different style, and continuing basketball.”

Jeremiah Robbins’ ears perk up when he hears of a potential prospect from this area.

“I really get excited about players from the L-C valley,” said Robbins, the former coach at Lewis-Clark State who is now in charge at Umpqua. “I know the coaches, and I trust their evaluations.”

In particular, Robbins liked Peace’s offensive aptitude. The 6-foot, 220-pound infielder — who did some pitching with the Bantams too — could drive baseballs over fences. He hit all three of Clarkston’s home runs as a junior in 2019, finishing with a .230 batting average, a .315 on-base percentage and a .752 on-base-plus slugging percentage for the 8-7 Bantams. He batted .270 as a sophomore.

“Damon has a chance to really hit,” Robbins said. “He’s a diamond in the rough. (Former L-C player/assistant Mike) Madrid sent me some video, and I was impressed. I also talked with (Clarkston coach Bruce) Bensching, and knew I had to get Damon. His future is very bright.”