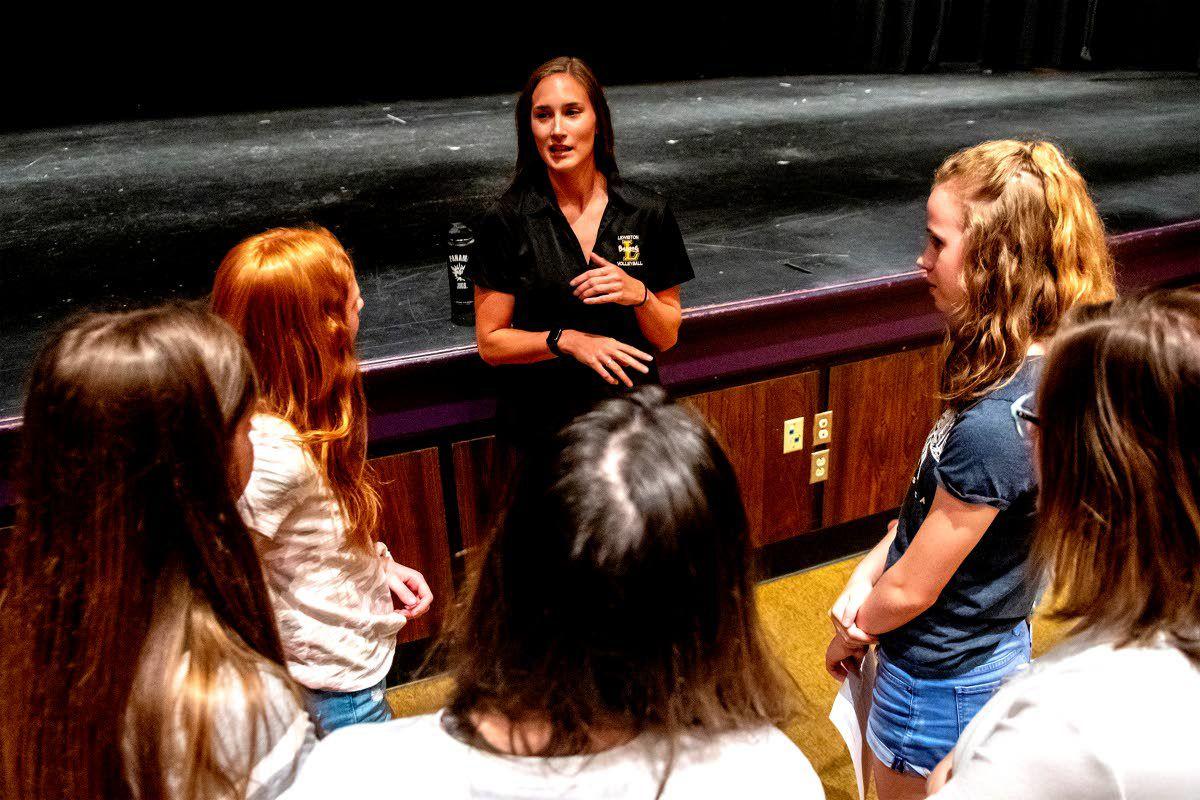 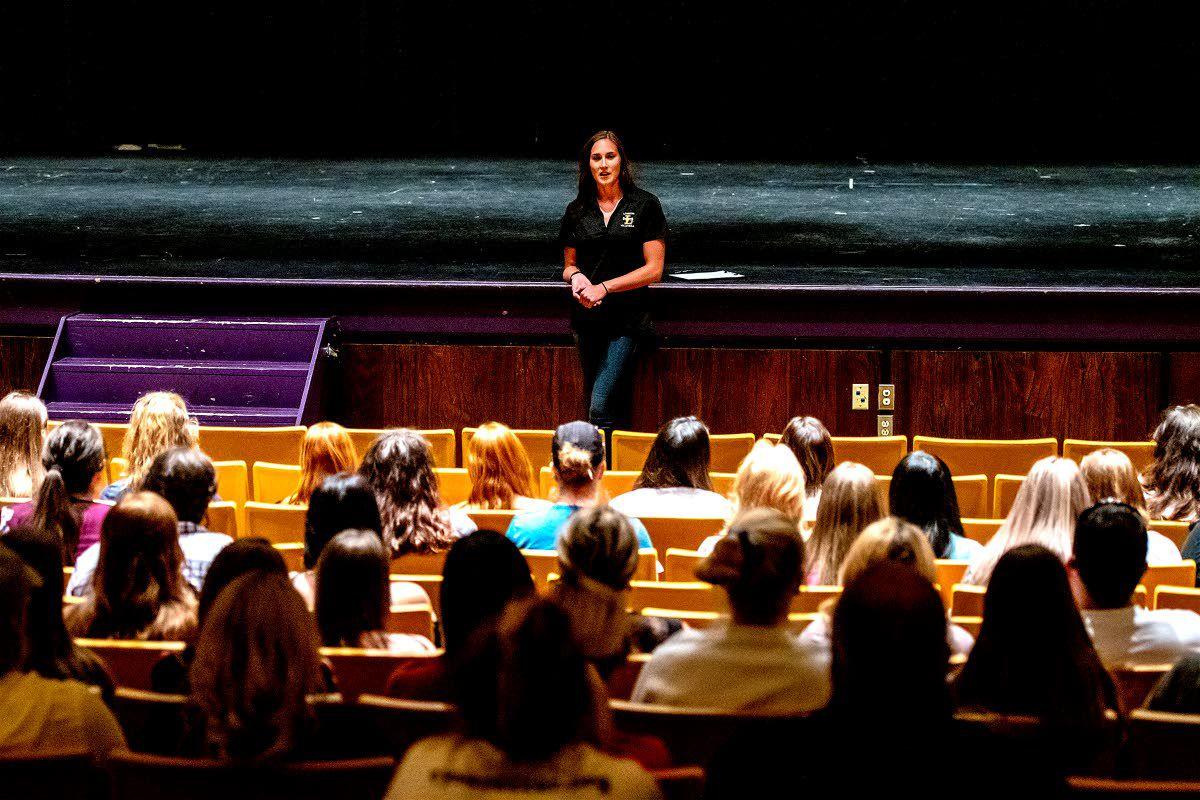 Thompson took questions from several parents about the upcoming season during a 40-minute informational meeting. 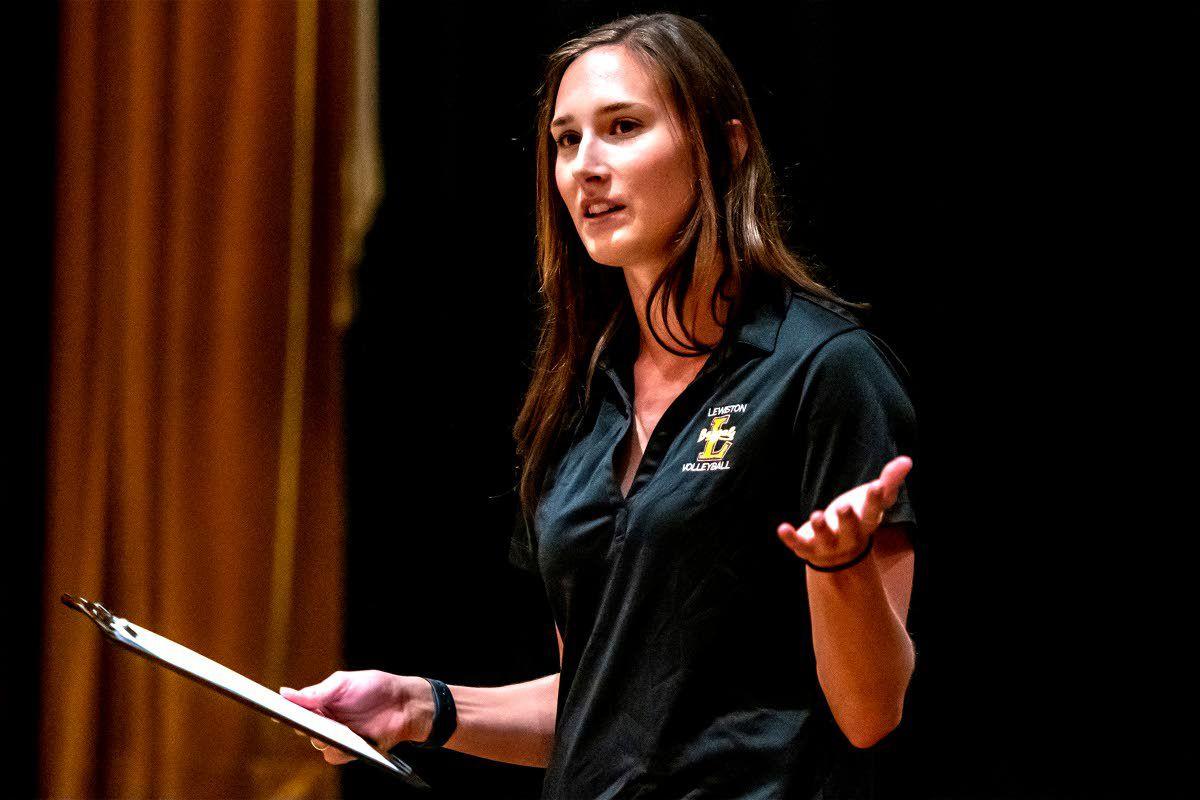 Thompson took questions from several parents about the upcoming season during a 40-minute informational meeting.

When Cassie Thompson takes the reins as volleyball coach at Lewiston High School in the fall, her practices never will lack intent.

There won’t be drills just for drills’ sake. Each workout will be specialized, and focused.

“She talked about body language on and off the floor, and having intention in her practices with everything she does,” Bengals athletic director Corey Williams said. “There were some things that made her at least come across wiser than her years.”

Thompson, a 2017 graduate of the University of La Verne (Calif.) and former star Garfield-Palouse student-athlete, was announced Wednesday as Lewiston’s new coach, replacing Mandi Hare, who has departed the area because of a family work conflict.

Thompson’s objectives resonated during a highly competitive hiring process. Noted by Williams was her enthusiasm — and long and successful background with the sport.

“She (had) a (player/parent) meeting (Wednesday), and she (was) two hours early, which I love. She’s eager to do it right.”

Thompson, who was born in Pullman, was a standout collegiate middle-blocker for the Leopards, earning a first-team All-Southern California Intercollegiate Athletic Conference nod as a senior. She helped guide La Verne to two NCAA Division III national tournament appearances.

Thompson, originally an outside hitter, was moved to middle blocker midway through college for her quickness on the block.

“I had a great experience there, I loved it, and it transitioned into coaching club,” said Thompson, who averaged 2.38 kills per set as a senior, hitting at a .330 clip and posting a career-high 19 kills in a win against No. 2 Claremont-Mudd Scripps. She registered almost a block per set that season, and had eight matches with double-digit kills for La Verne, a consistent national tournament contender.

“I’ve always known I wanted to coach at the high school level, and build a program. I’d been looking at opportunities over the last year or so.”

Thompson, after graduation, coached club in California for a year, then returned to the Palouse. She’s spent two years as one of two coaches in charge of the Club ZZU 17U national team — a program for next-level volleyball prospects from the area.

Lewiston’s Megan Halstead, Peytin Thompson and Julia Dickeson played for Thompson’s ZZU team, and had encouraged her to apply for the open position. Now’s the perfect time for her to “commit to it,” Thompson said.

She has one semester left to complete a master’s degree from Washington State in sports management, and has a goal to perhaps one day advise athletic operations, or teach — she’s been a substitute since graduation. At La Verne, Thompson studied international business and language with an emphasis in Spanish, with a speech communications minor.

So instructing her volleyball pupils shouldn’t be a tall task.

“I’ll communicate my expectations from the beginning,” she said of her coaching style. “You can only get what you expect if you communicate your ideas, and make sure they’re lived up to. Intent is big for me, and I like to focus a lot on progress and growth. I think growing and learning precedes performance. If I can get them focused on continued improvement, that’ll lead to sustained success.”

At Gar-Pal, Thompson — who’s father, Scott, is the Vikings’ athletic director — was a valedictorian and All-State volleyball player, who competed for Club ZZU and also ran track. She worked hard to earn academic assistance for college.

“I didn’t really play club ball to get recruited, I played because I loved volleyball; I wanted to play as much as possible,” she said. “(My success) was kind of surprising, but I realized I could do it, then it was like, ‘Let’s see where it goes.’”

Thompson has coached ZZU to a victory at a local Zoopalooza tournament, and a top-20 finish at a Las Vegas event in which the team entered with a low ranking. Many of her players have gotten recruiting attention. She intends to stay with the club team during offseasons.

“It’s such a supportive community. I think it’ll be a good time to come in with a new team and new vision,” she said. The Bengals graduated five from their 2019 roster.

“I’ve heard nothing but good things (about the team), that they all have great work ethic. I’m excited to capitalize on that. … We want to do a few things really well, instead of a lot of things OK.”