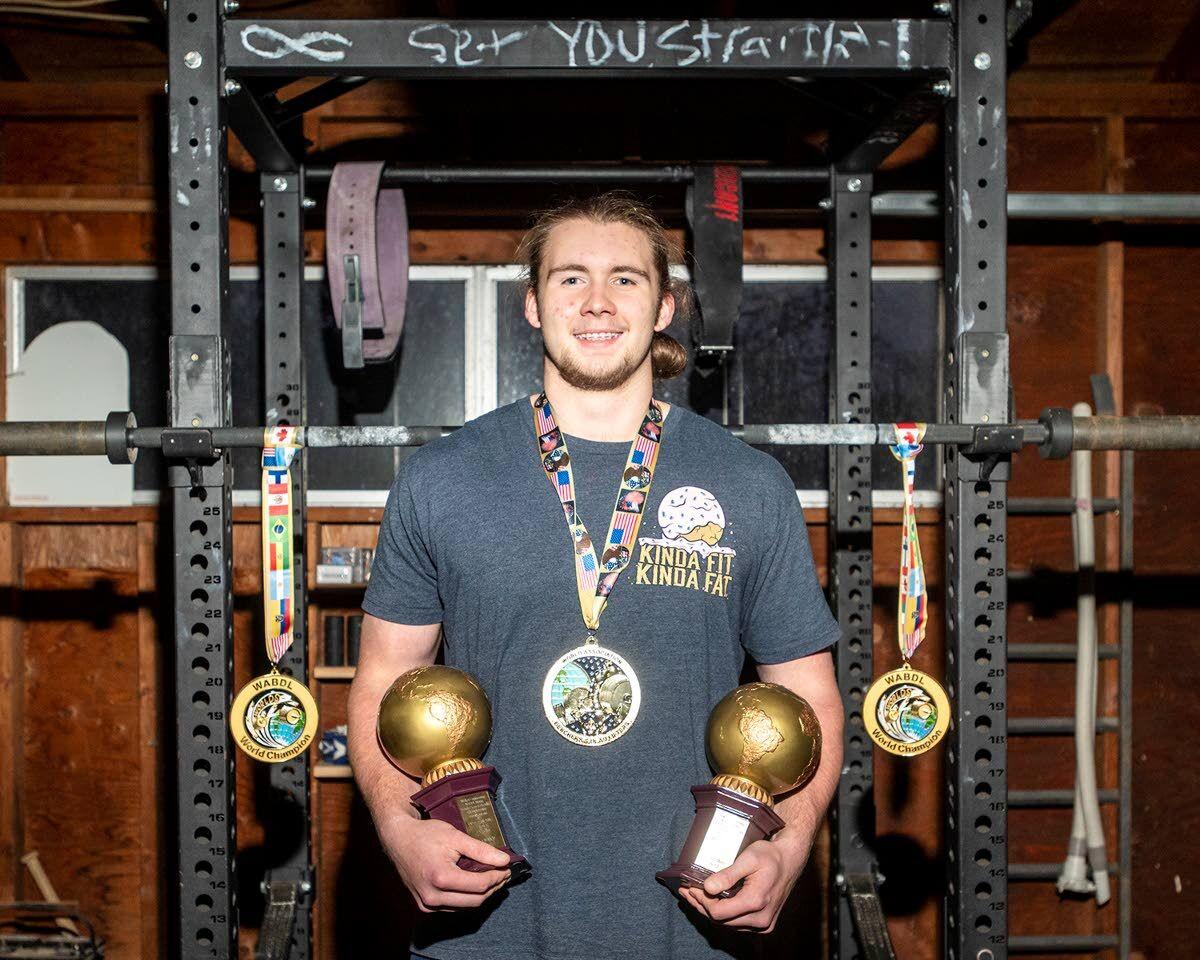 Trevor Baune, 16, poses for a portrait with a collection of weightlifting awards in his home gym in Lewiston. Baune holds national records of 319 pounds on the bench press and 660 pounds in the deadlift. 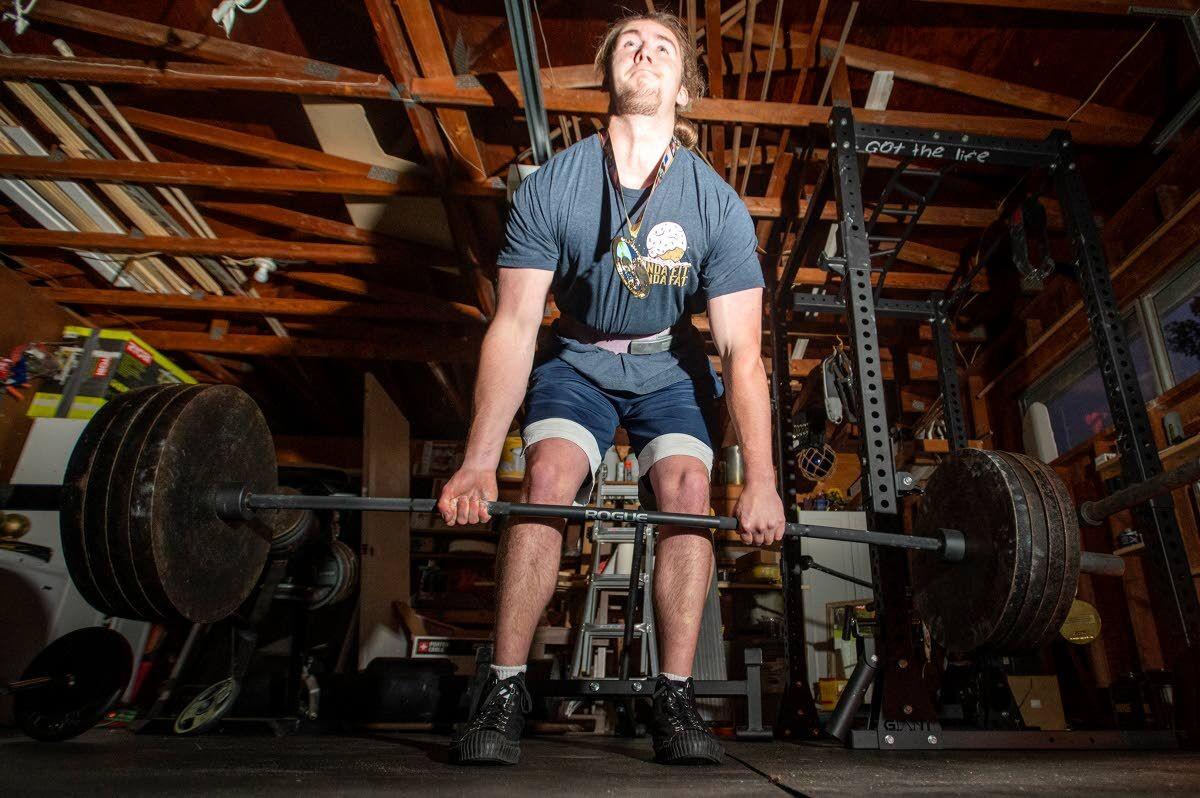 Trevor Baune deadlifts 405 pounds while working out in his home gym in Lewiston. Baune said his inspiration for lifting was “to simply be stronger than my peers.”

Trevor Baune, 16, poses for a portrait with a collection of weightlifting awards in his home gym in Lewiston. Baune holds national records of 319 pounds on the bench press and 660 pounds in the deadlift.

Trevor Baune deadlifts 405 pounds while working out in his home gym in Lewiston. Baune said his inspiration for lifting was “to simply be stronger than my peers.”

Most student-athletes compete in a sport or club — such as football, basketball, volleyball — that is sanctioned by a school or a state’s athletic association.

Trevor Baune is not your every day student-athlete.

The 6-foot-4, 259-pound Lewiston High School junior, you see, is a national powerlifting champion at the age of 16. He holds two national records in his age group and weight class for deadlift (660 pounds) and bench press (319).

Baune broke the two records at the World Association of Bench and Deadlifters World championships at the Sheraton Crescent Hotel in Phoenix, Ariz., in late October.

The record-setting performance didn’t come without some trials and tribulations. He’s a relative novice in the sport, he’s done all of his work without a coach and teaching himself via videos, and impressing almost everyone who has come in his path.

George and Trevor’s mother, Shannon, have been immensely supportive since he began his quest.

But it wasn’t always easy. Shannon Baune had dreams of Trevor playing for the Bengal football team, but he decided to hang up his cleats after a summer camp in his freshman year.

“He kept talking about how much he wanted to lift, and I always wanted Friday night lights,” she said. “I was pushing football, but after that camp, he said I’m not doing it anymore. Coming to grips with that was tough, but seeing him now, we couldn’t be more proud.”

Trevor Baune doesn’t belong to a gym in the area. In fact, he does all of his workouts in his garage. He and George started building an at-home gym at the start of the pandemic in 2020.

“All the gyms were closed because of COVID, so we decided that we were going to build a gym at home,” George Baune said. “We got weights at the Elks Lodge because they were getting rid of their weight room, so I bought weights there and got him a bench and we just put it all together.”

What started as Trevor’s only option of working out quickly turned into his preferred way of lifting. The junior hasn’t gone out to an outside gym since the gym was built.

“That gym is pretty beautiful if you ask me,” Trevor Baune said. “It’s helped a lot. You don’t get sidetracked like you do at an outside gym. You don’t have all the options, When you’re in the garage, your options are more limited so you can really focus on what needs to be done.”

When working out in the garage, problems that arise aren’t issues at an establishment. The example being when it’s hot outside, it’s twice as hot in the garage. When it’s cold out, it takes a while for Trevor Baune to warm up.

“During the summer when it was really hot, I would not let him work out. But, he would still find ways to fit it in,” Shannon Baune said. “He would work out at 12:30 in the morning, I was blown away.”

Trevor has been doing all of this without a coach. Everything he’s learned about powerlifting and working out has been through YouTube.

“I’ve probably spent more than a 100 hours on YouTube just learning strong man ideology,” he said. “I can’t even begin to explain how much I’ve learned, and that doesn’t even include videos that I’ve watched about form and technique.”

He used all of that form and skill in the competition in Scottsdale.

Baune was prepared to lift in the 274-pound class before the meet, but he weighed in at 264 pounds the day before the event.

“Before the meet, I had been trying to gain weight,” Baune said. “But because of some miscommunication, I ended up signing up for the 259-pound weight category, so I had to start losing weight as soon as I got there.”

Trevor and his father, George, found the closest available gym and hit the sauna.

“I was drinking a ton of cranberry juice and eating a bunch of food before I got there,” Trevor Baune said. “Then I had to adjust and sweat out the weight and reweigh. I thought that was going to take a huge hit on my electrolytes, but it helped the next day.”

The hard work paid off.

“Breaking that (deadlift) record was my main focus before I stepped on stage,” Baune said. “I wasn’t sure about the bench, but when I hit 281 and had an opportunity to break the record at 303, I calmed down a little bit.”

The officials at the event allowed Baune to do another lift at 319 pounds since he already had broken the record.

“When he first got into it, I didn’t necessarily know what a big lift was,” George Baune said. “So I thought 400 to 500 pounds was standard until we went to a competition and saw that most of the adult men weren’t even coming close to what he was doing.”

For now, Trevor Baune is just living in the moment and not thinking too far ahead in regards to his powerlifting career.

“If I get sponsors. then I could do it for a lot longer,” Trevor Baune said. “But I’m going to do as much as possible for as long as possible. I’ll do it until I don’t want to do it anymore. If I can make a career out of it then that’d be cool. If not, then I guess I have some cool records.”