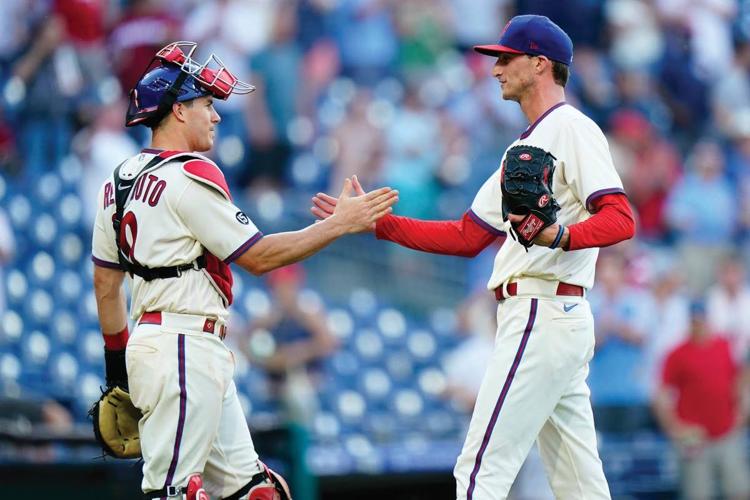 Former Lewis-Clark State pitcher Connor Brogdon, right, currently is 5-2 with a 4.19 ERA and 30 strikeouts in 37 appearances for the Philadelphia Phillies this season. 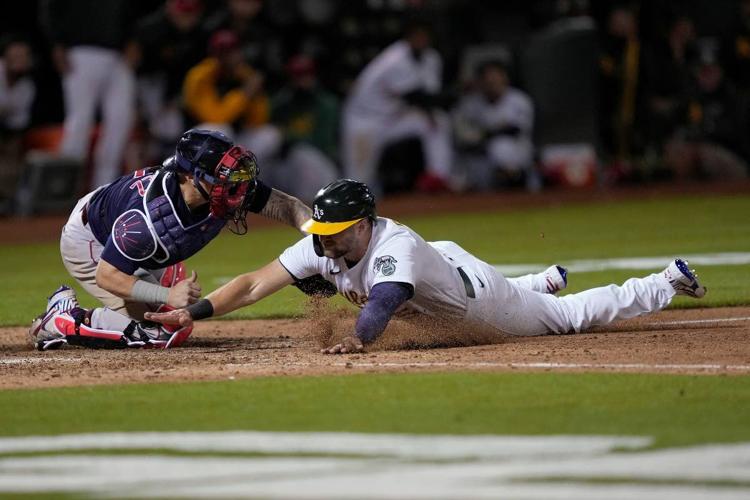 Former LCSC standout Seth Brown, sliding, is hitting .190 with 10 home runs and 28 RBI for the Oakland Athletics this season.

Former Lewis-Clark State pitcher Connor Brogdon, right, currently is 5-2 with a 4.19 ERA and 30 strikeouts in 37 appearances for the Philadelphia Phillies this season.

Former LCSC standout Seth Brown, sliding, is hitting .190 with 10 home runs and 28 RBI for the Oakland Athletics this season.

Two former Lewis-Clark State baseball standouts are settling in at the major league level, and another isn’t far from rejoining the MLB fold.

A pair of Washington State alums also are seeking returns, and two others are working to impress in Triple-A ball.

Meanwhile, many other local college products remain in the minor league grind, climbing the arduous ladder of professional baseball.

Here’s a look at where they’re at:

Connor Brogdon (Philadelphia/MLB): The second-year major leaguer oddly joined elite company early this season. Brogdon, the Phillies’ leaned-on late reliever, booked a 3-0 record in his team’s first six games. According to Fansided, that tied the spindly but strong-armed right-hander with Cy Young for most wins through six games — he’s one of just 13 MLB players to do it. Brogdon currently is on the 10-day injured list. As of Saturday, he’s tied for the lead among Philly ­relievers with 34 innings pitched. The former Warrior ace and 10th-round pick from Madera Ranchos, Calif., is 5-2 with a 4.19 ERA and 30 strikeouts against 30 hits and 12 walks in 37 appearances. He started this season with Philadelphia after splitting time between the MLB and Philly’s alternate training site in 2020. The 6-foot-6 Brogdon employs a high-90s fastball and circle change-up.

Seth Brown (Oakland/MLB): It seems Brown is learning how to stick. The one-year Warrior — an All-American in 2015 — played in 26 games for the A’s in 2019 after a late call-up, then went 0-for-7 in seven contests in 2020’s abbreviated campaign, spending most of his time at Oakland’s alternate training site. Brown, an outfielder who also sees time at first base, is through 71 games (45 starts) and 174 at-bats this season. It’s been more than three months since he made his latest return to the A’s roster. Brown’s batting average of .190 isn’t superb, yet he’s versatile — he’s made starts at four different positions — and sharp on the defensive end, and just enough of a threat at the plate. The product of Medford, Ore., has 10 homers, 28 RBI, a couple of three-hit games, five two-hit games and a walk-off shot this year. He hit safely in seven out of 10 games at one point in May.

Blaine Hardy (Milwaukee/Nashville AAA): A 13-year pro veteran, Hardy is eyeing a return to the majors after two seasons away. He is 3-4 with a 3.69 ERA in 39 innings across 15 games (six starts) for the Triple-A Sounds. The 22nd-round lefty from Shoreline, Wash., threw in 233 games for Detroit in six years, then landed with Minnesota in late 2019, only to elect free agency again one year later. The Brewers invited him to spring training this year. In his major league career, Hardy is 14-10 with a 3.73 ERA.

Seaver Whalen (Tampa Bay/Montgomery AA): Whalen, a 32nd-rounder in 2017 out of Vancouver, Wash., made his Double-A debut in May. In 40 games, the Biscuit infielder owns a .211 batting average and a .302 on-base percentage, with four homers, seven doubles and 19 RBI.

Tyler Burch (Philadelphia/Jersey Shore High-A): The former NAIA West Pitcher of the Year was promoted to High-A Jersey Shore in June. The right-hander from Wenatchee is 4-3 with a 3.70 ERA, 1.07 WHIP and 40 strikeouts against 18 hits and eight walks in 24 innings this season — between two teams. Burch, LCSC’s No. 4 all-time strikeout leader (179), is in his second full season in the minors. He pitched in Australia in 2020 while the minors were shut down because of the pandemic.

Brock Ephan (Independent/Ogden-Pioneer League): The reigning Cascade Conference MVP and an NAIA All-American, the first baseman is hitting a solid .343 in 15 games so far for the Raptors.

Jack Johnson (Independent/Ogden-Pioneer League): Johnson, about a month removed from completing an impressive two-year stint at LCSC, signed alongside Ephan. Playing outfield, the Seattle native is off to a tough start in the pros, batting .095 (2-for-21) in 13 games.

Dillon Plew (Independent/Santa Cruz-Pecos League): Having recently completed his college career after starting 197 games — at LCSC and Washington State — Plew signed with the Independent Seaweed, with whom the third baseman from Kennewick, Wash., is batting .359 with 11 doubles and 19 RBI through 20 games.

Gunnar Buhner (Independent/Lincoln-American Association): The former NAIA World Series Golden Glove Award winner at second base — and son of former Seattle Mariners great Jay Buhner — is hitting .103 through 30 games for the Saltdogs, his third Independent team since leaving LCSC in 2017.

Damon Jones (Philadelphia/Lehigh Valley AAA): The left-handed reliever from Twin Falls was promoted to the big leagues this past Sunday, only to be sent right back to Lehigh Valley on Friday. Jones, the Phillies’ No. 13 prospect, has worked his way up quickly from short-season Single-A in 2017, but has yet to make his MLB debut. He’s appeared in 16 Triple-A games this season, all as a reliever — he had started for three years in the minors, logging a sub-3.50 ERA. A 22-game starter in two years at Wazzu, Jones is 0-2 with a 6.33 ERA and one save in 21 innings this year. Opponents are hitting .224 against him, and he’s struck out 25 against 17 hits and 19 walks.

Ian Hamilton (Minnesota/St. Paul AAA): Hamilton, an 11th-rounder in 2016, pitched in four games for the Chicago White Sox in the shortened 2020 season, surrendering two runs on four hits and five walks in four innings. Between that and his call-up in 2018, Hamilton has 14 major league games under his belt, and a 4.50 ERA. The righty was scooped off waivers by the Twins in February and designated to the Triple-A Saints after spring training. The three-time All-Pac-12 pick from Vancouver, Wash., has been stellar. He boasts a 1.29 ERA and a 2-0 record across 28 innings in 17 games this season. Hamilton, a reliever who’s seen some spot starts, has 39 strikeouts against 15 hits and 19 walks.

Nick Tanielu (San Diego/El Paso AAA): The third baseman has been a minor leaguer since 2014, when he was snagged by Houston in the 14th. The Federal Way, Wash., native elected for free agency in November, and was signed by the Padres to a minor league contract two weeks later. He landed with the El Paso Chihuahuas after spring training. With his 11th minor league team in seven years, Tanielu — a .364 batter at WSU in two seasons — has played in 48 games, and is hitting .222 with five homers, 10 doubles, 22 RBI and 24 runs.

Ian Sagdal (Washington/Harrisburg AA): A four-year starter for the Cougs from 2012-15, the first baseman from Wenatchee is batting .167 with one home run and four RBI in 16 games (48 at-bats) for the Double-A Senators — his fifth minor league team in six years. He’s hitting .278 in his career.

Shane Matheny (San Francisco/Richmond AA): The second baseman from Bremerton, Wash., kicked off his fourth professional season with his first Double-A call-up. The 23rd-rounder, an All-Pac-12 pick as a junior in 2017, hits .202 for the Flying Squirrels, with 28 walks, two homers and 11 RBI in 129 at-bats across 42 games.

Ryan Walker (San Francisco/Eugene High-A): The four-year standout WSU pitcher from Arlington, Wash. — who’s second in school history with 87 appearances — was assigned to the Emeralds in April. Since going to San Francisco in the 31st round in 2018, Walker hasn’t advanced past Single-A. This season, he’s 1-0 with a 2.45 ERA in 29 innings across 22 games, with 44 strikeouts against just five walks and 27 hits.

Andres Alvarez (Pittsburgh/Greensboro High-A): Alvarez, a two-time All-Pac-12 selection, has jumped two classifications in the minors since the Californian shortstop was drafted in the 22nd round in 2019. In eight games with the High-A Hops — Alvarez was injured earlier this year — he’s batting .250.

Late-2000s Warrior infielder Donnie Ecker is in his second season as a hitting coach with the San Francisco Giants. ... 2017 shortstop Micah Brown was released by the Marlins early in 2020. He’d reached Triple-A the year before. 2017 outfielder Jacob Zanon, a former NAIA World Series MVP, retired in January after reaching Double-A for the New York Mets. 2017 catcher Cooper Goldby hasn’t appeared in a minor league game since 2019 with Oakland’s Double-A team. ... WSU 2018 third baseman Justin Harrer and 2019 outfielder Danny Sinatro each recently announced that they’d be retiring from pro baseball. ... Alex Burg, who played catcher for the Cougars in the late-2000s, is the Texas Rangers’ coordinator of run production. ... First baseman Kyle Manzardo was drafted by Tampa Bay in the second round last week, pitcher Zane Mills went to St. Louis in the fourth and fellow pitcher Brandon White was taken by Miami in the 12th. It’s expected they’ll start off somewhere in the Single-A ranks in the spring.

How do you feel about s'mores?

Check your email for details.

Submitting this form below will send a message to your email with a link to change your password.

An email message containing instructions on how to reset your password has been sent to the e-mail address listed on your account.

Your purchase was successful, and you are now logged in.

A receipt was sent to your email.