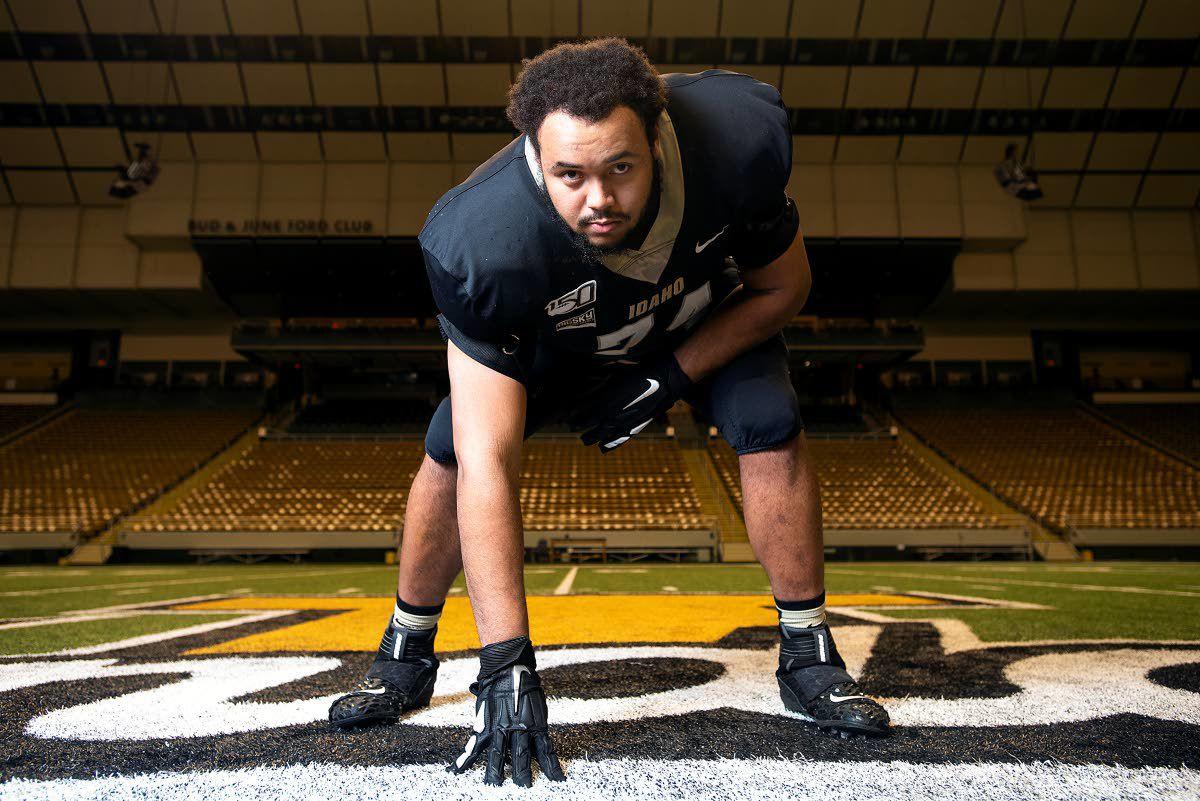 Tribune/Pete CasterIdaho senior offensive lineman Noah Johnson who has let his play on the field do the talking for him. He’s a Football Championship Subdivision All-American at his position and is a prospect for the upcoming NFL draft. 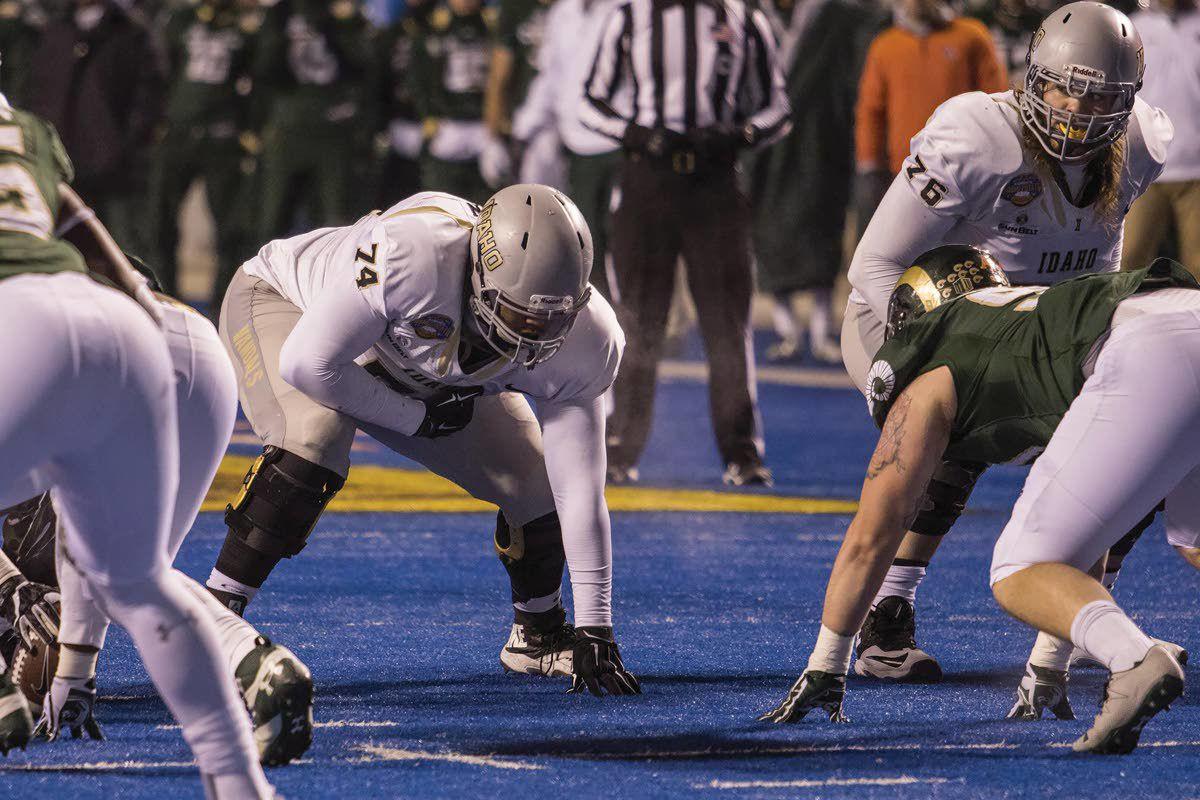 Tribune/Pete CasterIdaho senior offensive lineman Noah Johnson who has let his play on the field do the talking for him. He’s a Football Championship Subdivision All-American at his position and is a prospect for the upcoming NFL draft.

MOSCOW — Since his youth, Noah Johnson’s had a shell.

Growing up in Arkansas, he was the kind of guy to reply only with “yes” or “no” to yes/no questions. Johnson, the senior strong guard for Idaho’s football team, was a self-described “home body,” the “big, quiet kid” who didn’t mind an awkward silence.

“I never really talked,” he said. “I’d only talk to my group of friends, go home, do my homework and get on my video games with my friends.”

To some extent, he’s still reserved — the type of player that lets pancake blocks (“Vandal blocks”) do the talking.

But he’s been thrust into the limelight as a four-year starter, a Football Championship Subdivision All-American and a prospect for the 2020 NFL draft.

In other words, his shell has broken apart piece by piece with every defender’s shell he’s cracked, particularly when he does his favorite thing — pulling around the edge, making foes “feel it the next day.”

“He’s the perfect guy you want, really,” UI coach Paul Petrino said. “He steps on the field and plays with tenacious toughness, gets after people. And off the field, he’s probably the nicest guy you’ll meet in your life.”

It was basically right away that Johnson, an early graduate at Fayetteville (Ark.) High School, was forced into the spotlight. As a nervy freshman in Lewiston, during a 2016 spring practice, he had to go one-on-one in pass protection several times consecutively with defensive tackle Tueni Lupeamanu, a standout for the Vandals’ bowl-winning team.

“He got thumped a couple times,” offensive coordinator Kris Cinkovich said. “But he stayed in there, took a lot of reps and never flinched.”

Johnson said it was his “welcome to Division I football” moment, and it helped shape him. He weighed about 345 pounds then. Afterward, he “took it to heart” and began trimming. He checks in at 310 now, and stands 6-foot-4.

“Tueni was gonna have a field day with me; I needed to lose weight,” Johnson said. “I’d went home after that scrimmage and contemplated if I was cut out to play.”

Turns out, he was. Johnson earned the nod in fall camp, and made his collegiate debut against Montana State, starting at quick guard. He has started in all but three games in his career to this point, making the move to the strong side in the middle of 2016.

“When he missed a couple games (his freshman year), you could see the drop-off was huge,” Cinkovich said. “He just learns. You tell him something once, and he’s one of those guys where he doesn’t need a bunch of reps to pick stuff up.”

In spite of his bashful nature, and the fact he tore both his labrums two years ago, Johnson’s remained a mainstay, perhaps the program’s best guard since Mike Iupati. Johnson played through the pain late in his sophomore year, and had surgery in the offseason.

“You hear all these statistics about 0.7 percent of kids that play high school make it to the NFL,” said Johnson, who DraftScout has ranked among the nation’s top 30 guards. “Now that I actually have a chance, it’s unreal.”

At Fayetteville, he was a two-time All-State player who guided the Bulldogs to a title as a senior alongside his brother, UI freshman defensive end Coleman Johnson.

A few months before, Petrino reached out, somewhat unexpectedly.

The coach had been keeping an eye on Noah Johnson since he was a freshman — Johnson and UI quarterback Mason Petrino were classmates in junior high. They prepped and trained together, and Paul Petrino spotted Johnson when he was offensive coordinator at Arkansas in 2012.

“Knowing Mason and having that personal relationship with him made me want to branch out,” said Johnson, who’d also been recruited by his hometown Razorbacks, for whom his father, Willie, played linebacker in the mid-1990s. His family had season tickets, and Willie’s Arkansas jersey hung above Johnson’s childhood bed.

“I didn’t even know (Paul Petrino) was at Idaho, honestly, and my friends were asking me, ‘Noah, do you even know where Idaho is on a map?’ I pointed at Montana.”

Johnson said his familiarity with Petrino and his explosive Arkansas offenses played a part. He took a recruiting visit to Moscow during the winter, and admittedly, was “a little put off by the snow.” Fortunately, his tour guide was former UI linebacker and known nice-guy Kaden Elliss.

“You have all these ideas coming out of high school, you feel like college is gonna be crazy,” Johnson said. “Kaden definitely helped. He showed me it could be normal.”

Upon arrival, he found his niche, a “crew” that included fellow lineman Conner Vrba, kicker/punter Cade Coffey and Mason Petrino. The group has expanded, but the original three take much of the credit for chipping away at Johnson’s shell, partially through an ongoing gaming feud.

“I take 100 percent credit, just forcing him to go out and do stuff, and all those Ls I give him in Madden and 2K,” Coffey said. “I have a winning record against him in Madden, 2K, Connect Four, anything we play.”

Responded Johnson, teasingly: “He shouldn’t be taking the credit. If anyone broke me out of my shell, it’d probably be Mason or Vrba. ... Conner just talked to me so much.”

But in between all those group game breakdowns in Coleman’s room at the apartment, or those hangouts at Coffey’s digs in Rathdrum, Noah Johnson’s been blooming loudly into an on-field elite in the Big Sky — and the FCS.

The former All-Sun Belt guard has broadened his pass-protection expertise, and now engulfs rushers, locks them an arm’s reach away and anchors more firmly to the ground than in years past.

“I still kinda am, honestly, but I’m a little better,” he said. “I can ask you a question too. I can hold a conversation a lot better.”

On Saturday, he’ll join 10 other UI seniors on the Kibbie Dome turf for the final time.

Besides his tight-knit bunch of compadres, he’ll remember a couple of specifics: Staring up at “Vandals 61, Rams 50” painted on the big board at Boise’s Albertson’s Stadium in 2016, and an instance in the fourth quarter last year at Montana State, when he locked onto a Bobcats defensive back, and pushed him a good 20 yards into a snowbank.

“I buried him into it,” Johnson said. “That’s gonna be with me forever.”