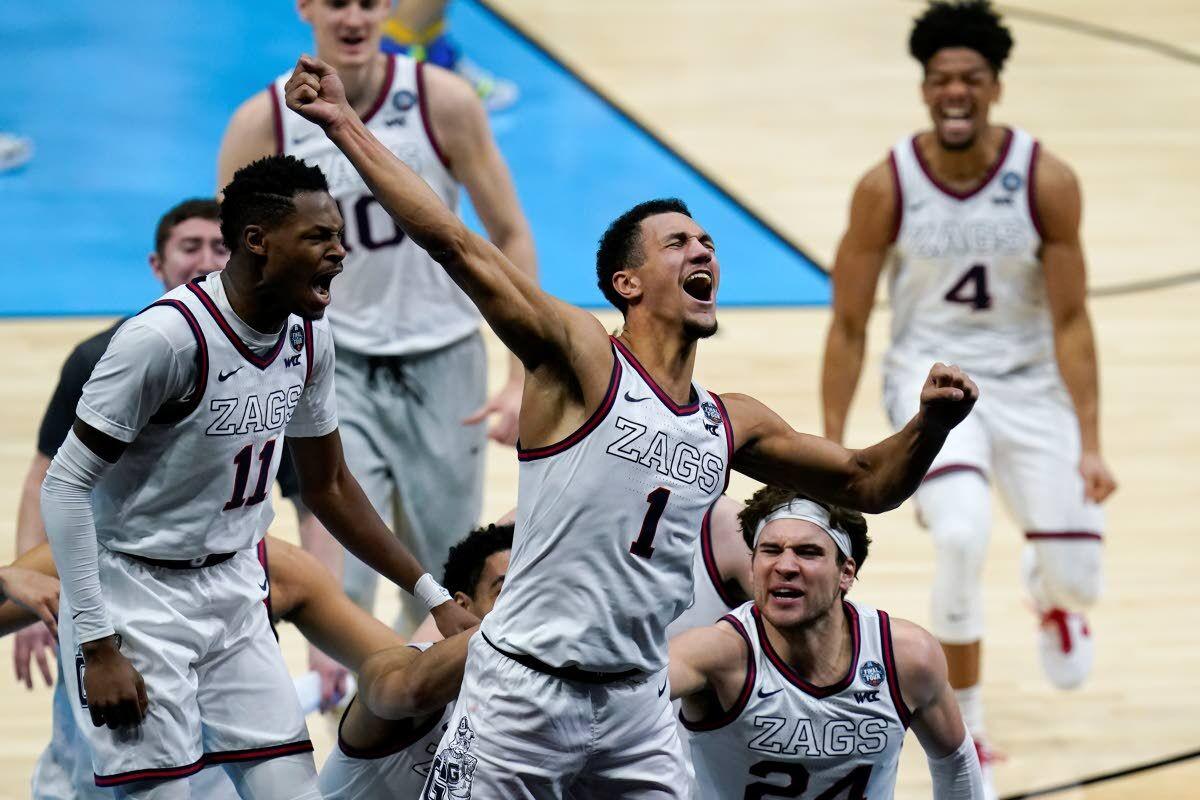 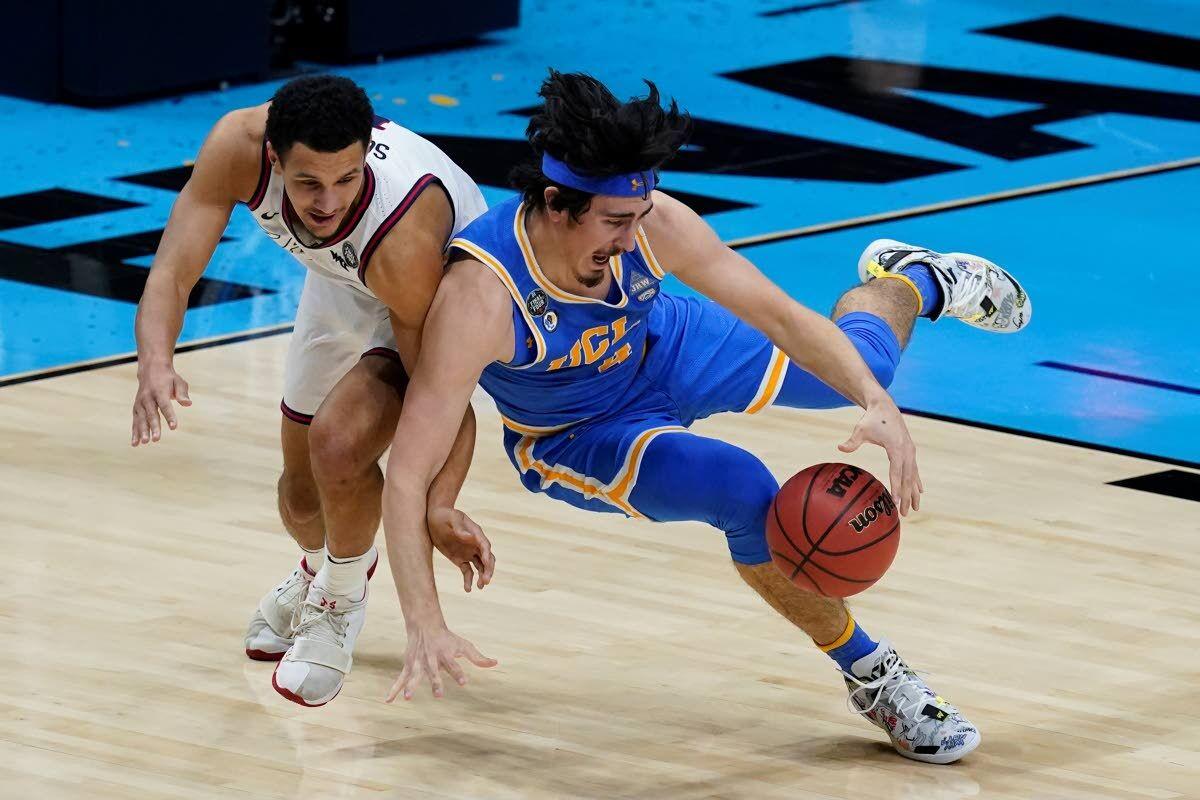 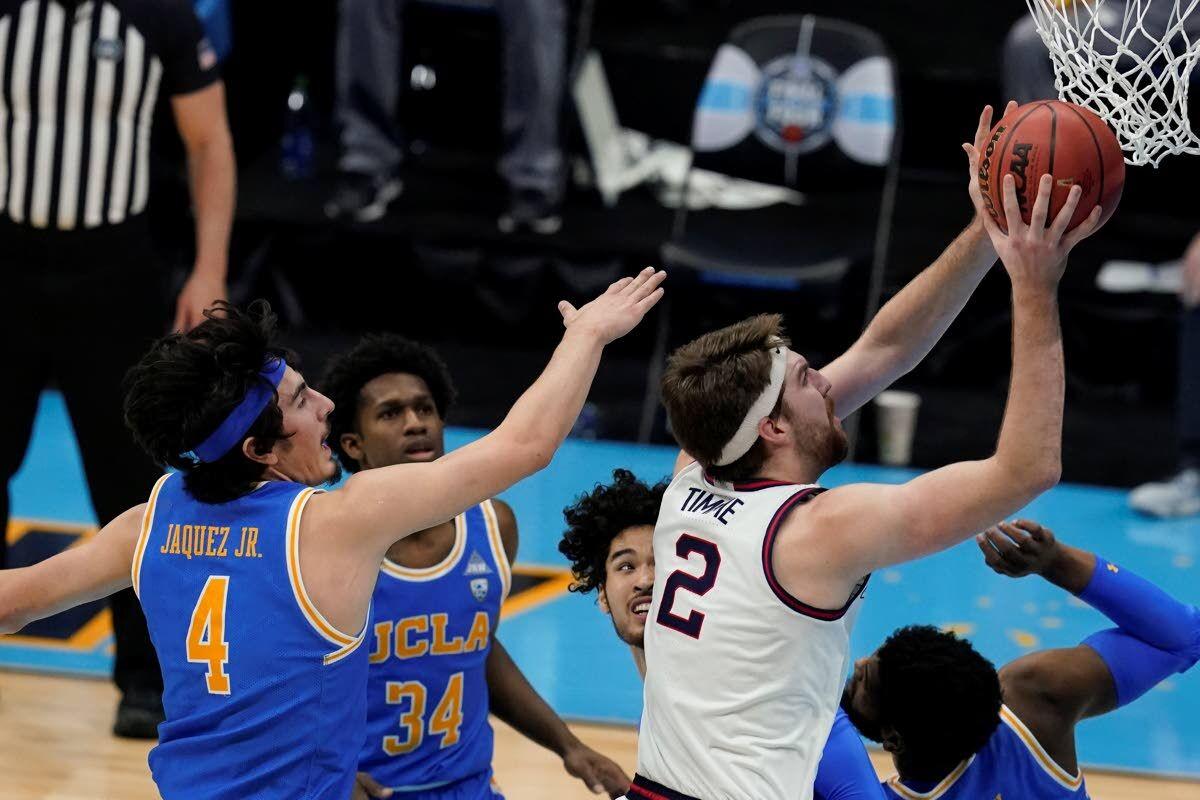 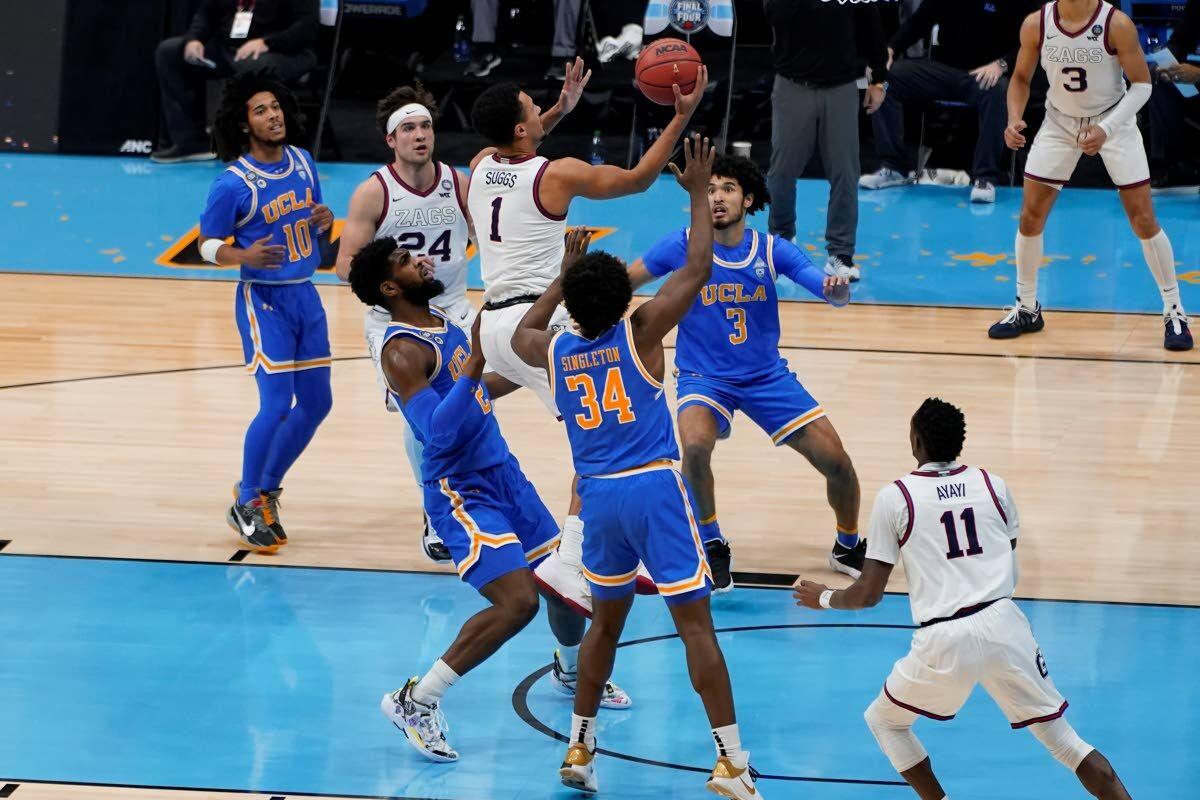 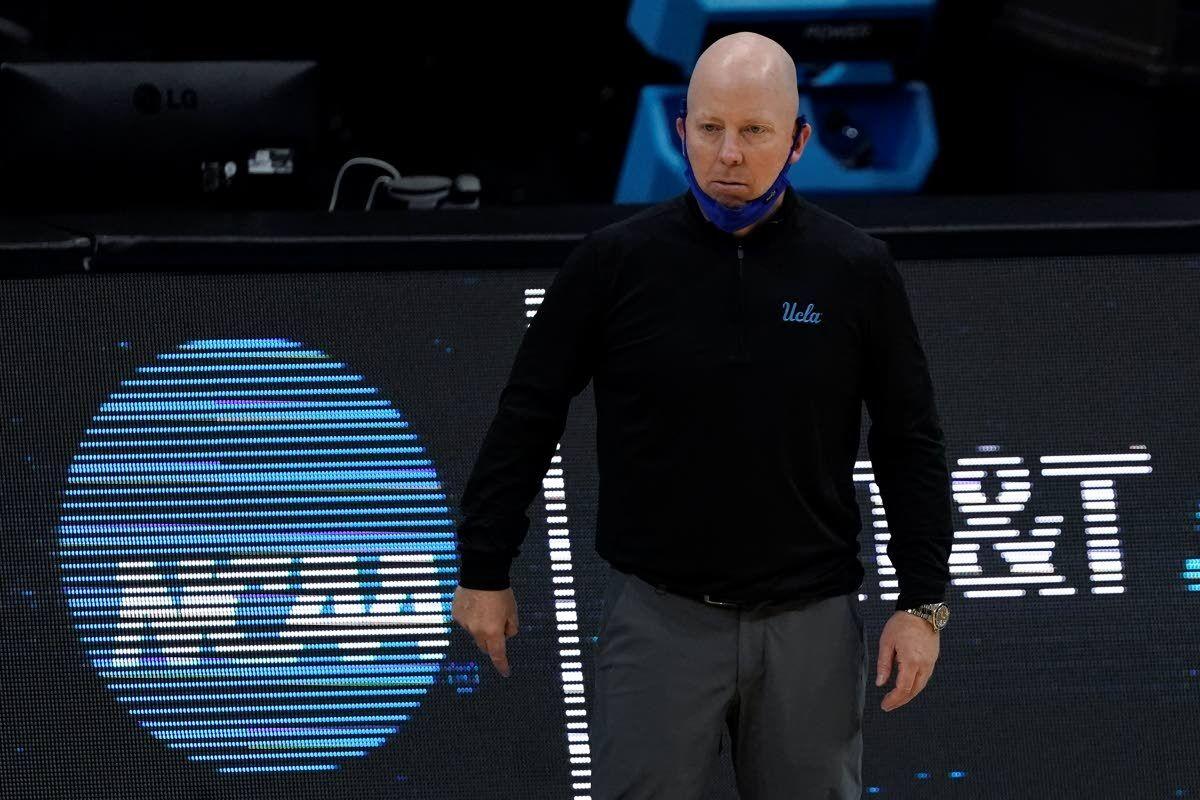 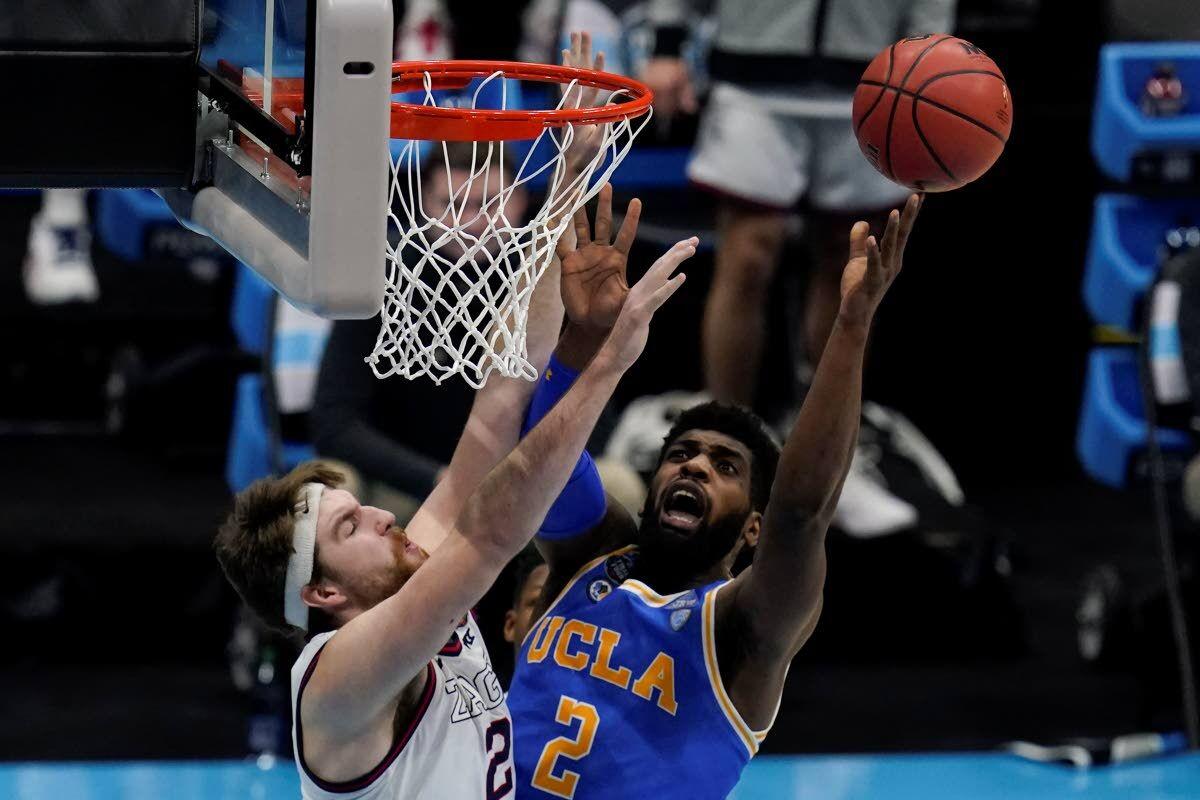 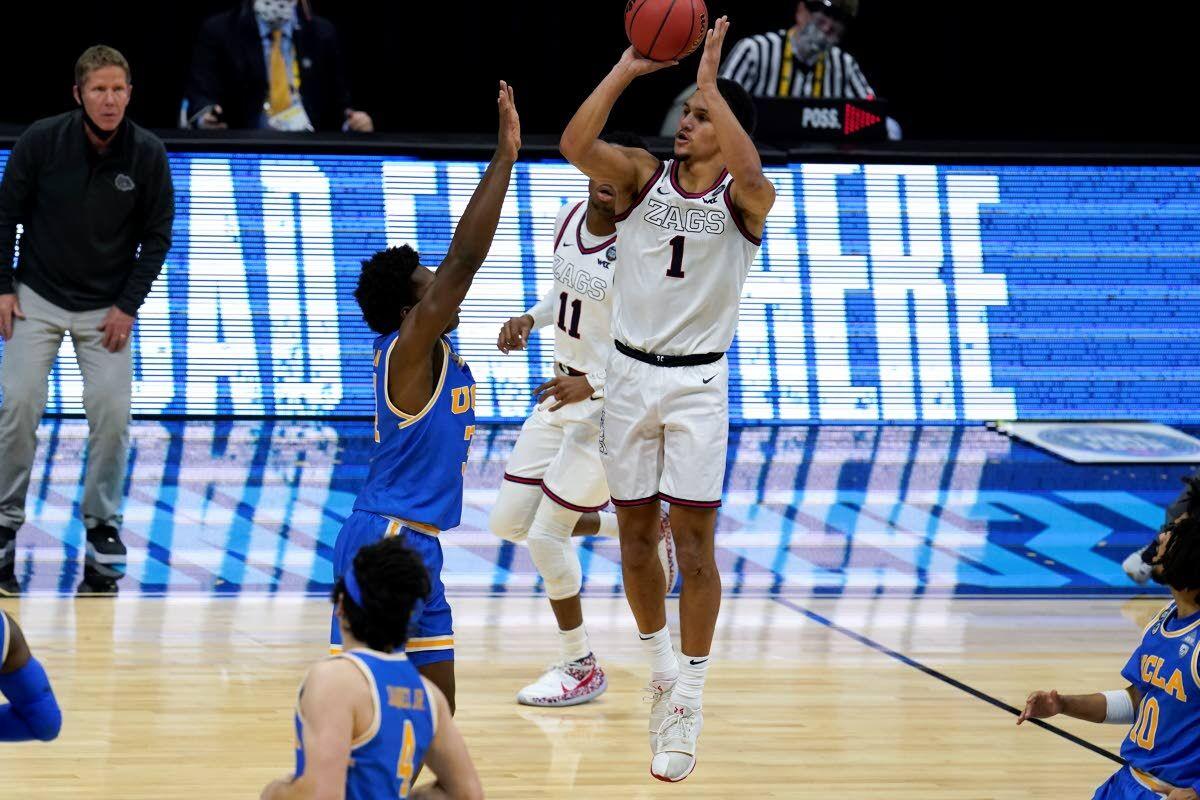 INDIANAPOLIS — Jalen Suggs took the inbounds pass and saw nothing but clear sailing. Three dribbles. Past the half-court line. A little stutter-step.

And straight into history.

The Gonzaga freshman banked in a shot at the buzzer from near the Final Four logo for a 93-90 overtime win Saturday against UCLA that vaulted the Bulldogs to within one win of an undefeated season and the national title.

This thriller in a national semifinal game was the best contest of the tournament, and, considering the stakes, it served up possibly the best finish in the history of March Madness — a kiss off the glass from near midcourt to keep a perfect season alive.

“Stuff like this is something you dream of as a kid and that you practice on your mini-hoop,” Suggs said.

After the shot went in, Suggs ran to the mostly empty press row, jumped up on the table, pumped his fists and let out a huge yell to the crowd of 8,000-or-so socially distanced fans. The refs checked to make sure he got the shot off before the buzzer sounded. He did, and the Bulldogs moved into Monday’s final, where they’ll play Baylor for the title.

They are the first team to bring an undefeated record into the championship game since Larry Bird and Indiana State in 1979. Bird lost that game to Magic Johnson and Michigan State. It means Gonzaga (31-0) could become the first team since the 1976 Indiana Hoosiers to go undefeated.

“We were lucky enough to hit a 50-footer,” Gonzaga coach Mark Few said. “So it helps when you have a magical, special guy like Jalen, special at the end of games.”

Even without Suggs’ shot, it would’ve been hard to beat this game for pure excitement — a welcome relief in a tournament that has produced mostly blowouts and duds, sort of like Baylor’s 78-59 snoozer against Houston earlier in the day.

The nightcap featured 15 ties and 19 lead changes and an 11th-seeded UCLA team that simply wouldn’t give in. Although they lost, the Bruins snapped a streak of 27 consecutive double-digit wins by Few’s juggernaut.

Some might say it was the greatest game ever.

UCLA (22-10) was the first team to lead Gonzaga in the second half in five tournament games and, in fact, had a chance to win at the end of regulation.

With the game tied at 81, Johnny Juzang was taking it hard to the basket in the final seconds, when Zags forward Drew Timme, playing with four fouls, stepped into the paint, planted his feet and took a charge.

Turns out, it’s a shot the freshman — who chose Gonzaga basketball over a chance to play Division I football — practices every day.

“I’m just telling you he makes those ones all the time in practice,” Few said. “He’s just got this magical aura about him. I knew when he shot it it was going in.”

Before that, Suggs’ best play might have been his rejection of UCLA big man Cody Riley (14 points, 10 rebounds), who looked to be going in for a dunk that would have put the Bruins up by two at the 2-minute mark. Suggs got the block, then fed Timme (25 points) for a dunk that instead gave the Zags the slight advantage.

UCLA deserved better than this.

The Bruins went toe-to-toe all night with the top-ranked team in the country. This was their third overtime out of six games in the tournament — they played an extra one in the First Four — and they never trailed by more than seven. They got everything they could have dreamed of on a magical night of college hoops. Everything but the win.

And so, they stay “stuck” on their nation-leading 11 titles, most of them won back in the John Wooden days.

“I just told them, ‘We’ve got to let that shot go,’” Cronin said. “We won. I sit in coach Wooden’s seat. When you sit in his seat, you have to channel the things that he taught. True greatness is giving your best effort.”

Who would dare say they didn’t?

Juzang had 29 points for the Bruins, including a 15-footer with 1:27 left in regulation that helped them claw back from seven down to tie it at 79.

It looked like it would be Timme’s overtime. He dipped and ducked for Gonzaga’s first six points of the extra session and an 87-83 lead that felt like breathing room in this one.

But Cronin called a timeout and UCLA chipped away again.

Juzang’s putback with 3.3 seconds left tied it at 90, and set the stage for a great shot. Maybe a rewrite of the history books too.

There was Laettner’s catch-and-shoot to help Duke beat Kentucky back in 1992. In 2017, Kris Jenkins made a 3 to help Villanova win the title at the buzzer. Eleven years ago, right here in Indy, Gordon Hayward of Butler launched a half-court heave that went in and out and almost toppled Duke.

But it went in.

“This is,” he said, “the greatest feeling I’ve ever been a part of.”