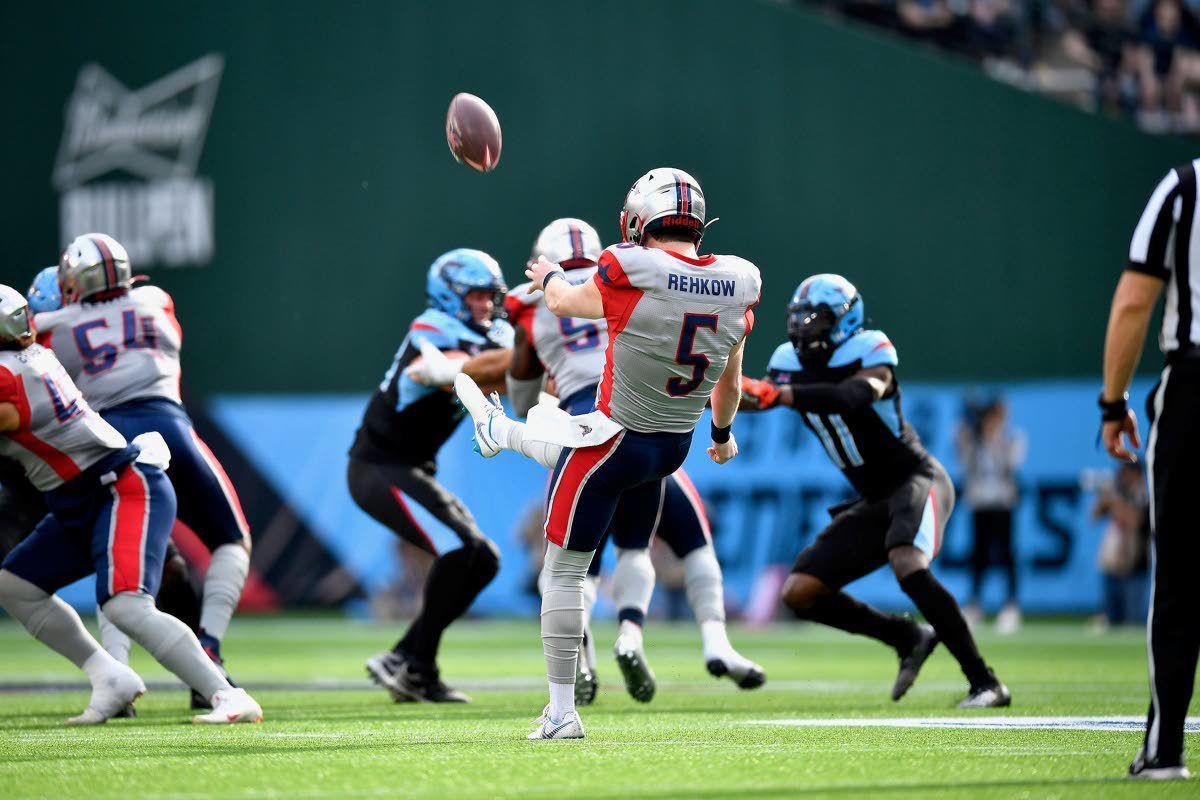 Former University of Idaho punter Austin Rehkow boots a punt during a Houston Roughriders XFL game this season. The Roughnecks were third in the XFL this season in net punting with an average of 37.4 yards per kick. 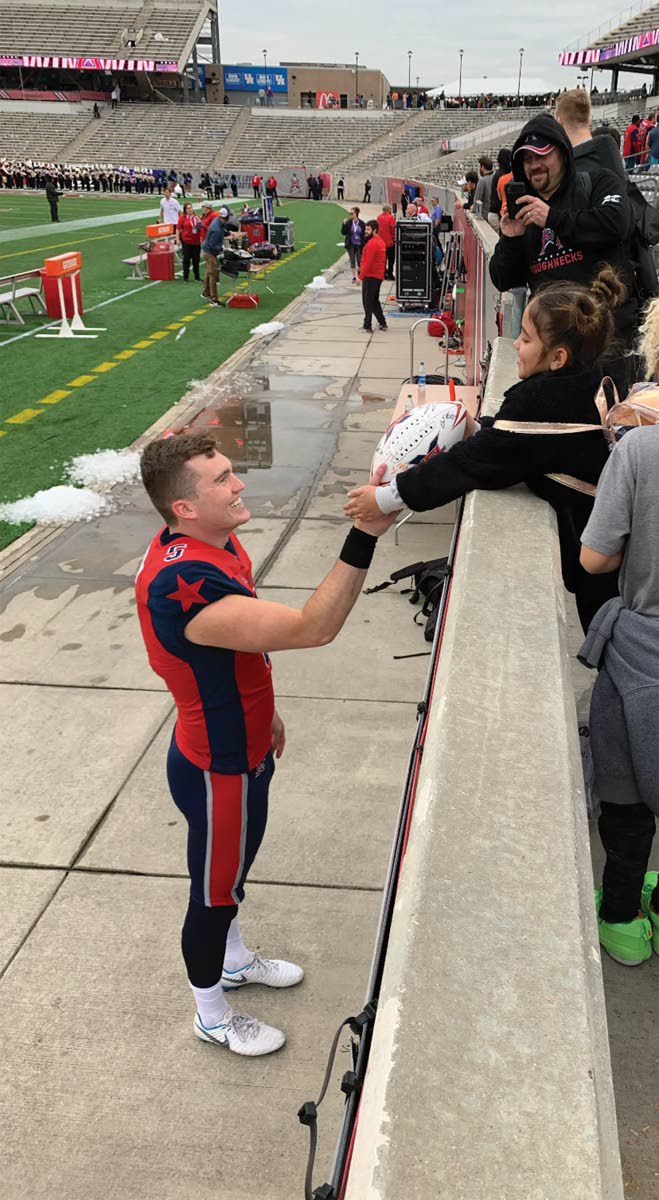 Former University of Idaho punter Austin Rehkow boots a punt during a Houston Roughriders XFL game this season. The Roughnecks were third in the XFL this season in net punting with an average of 37.4 yards per kick.

Austin Rehkow seriously considered hanging up his cleats and shell, stamping his career closed after the Alliance of American Football spring league suspended operations in April 2019.

Rehkow, a Spokane-raised former University of Idaho All-American punter (2013-16) — and big-leg kicker — was trending toward setting his mind fully on chiropractic school at Western States (Ore.).

That is, until Salt Lake Stallions general manager Randy Mueller expressed his desire to keep Rehkow, a former player of his in the AAF, on a team.

“After the AAF folded, I was thinking, ‘It’s been 2½ years since college; I wasn’t sure how the salary and schedule would work out, so I thought I was probably done,” said Rehkow, a Central Valley High School graduate and a player on the 2016 Potato Bowl champion. “Then, just talking with Mueller, I found out how the schedule worked. I just thought, ‘I’d be an idiot not to take this opportunity.’”

In June, Mueller was hired to work under coach/GM June Jones as personnel director with the Houston Roughnecks, a franchise in the second version of the XFL — a spring football league founded by WWE CEO Vince McMahon.

Mueller, familiar with Rehkow’s kicking versatility and weaponized leg, told him, “We’re interested in having you, if nothing shakes out in the NFL,” Rehkow recalled.

“We had a good working relationship in Salt Lake,” he said.

In October, just days before the XFL draft, Rehkow was given a sign of sorts that he wasn’t finished with football — the New England Patriots invited him for a workout.

“It’s never a bad thing to get your name circulating,” said Rehkow, who twice before had gotten NFL tryouts — with the Buffalo Bills in 2017 and the New York Giants in 2018. “It’d been a little bit since I’d kicked. I’d been so ingrained in punting. They liked my leg strength, but with the NFL, it’s always about experience.

“When I went to New England, it was like, ‘If something happens here, great. If not, the (XFL) draft was in like a week.’”

Mueller and Jones had their eyes on the former UI special-teams captain and “fourth-down quarterback.” In an open fifth “phase” of the XFL draft, which is ordered by positions for four rounds, Rehkow was selected by the Roughnecks.

“I was anxiously waiting to hear if I’d go to Houston, then after some phone problems with Randy, it turned out great,” Rehkow said. “I obviously wanted to play for him, and it worked out. I finished out the quarter (of chiropractic school) and headed out.”

Rehkow hasn’t had reason to regret it.

The Roughnecks, before the season’s cancellation amid concerns with the spread of the coronavirus, were the league’s best team at 5-0, boasting the No. 1 passing and scoring offense, and the top defense in terms of sacks and turnovers forced.

Houston’s fan base became fervent, with its average attendance just under 20,000. The Roughnecks featured stars like quarterback PJ Walker, the league’s MVP frontrunner, and defensive back Deatrick Nichols, both of whom signed with NFL teams after the second half of the season was scrapped.

“Our GM drafted well. Our results spoke to that,” Rehkow said. “It was rewarding, especially because we won all our games.”

The team, which was housed in a hotel and played at the University of Houston’s TDECU Stadium, was welcomed by the city. Players, Rehkow included, commonly were asked for autographs. They might even be hooked up by a golf club for some free rounds or have a restaurant send complimentary food.

“We had some places to go where’d you be treated like a pro team,” said Rehkow, who mostly just “lied low” and connected with the specialists, and Arizona State linebacker Carl Bradford. “There was a buzz about it. I’d usually spend time engaging with the fans. That was probably my favorite part. To get that kind of support in a startup league was great.”

And at the helm, Houston had the well-versed football mind of Jones, a journeyman coach at the collegiate and professional levels and a former NFL player who “I just have so much respect for,” Rehkow said.

“The guy just knows football. He’s laid-back and mellow, and he has some great quips here and there. It was awesome to see what PJ was able to do; he just took off with the run-and-shoot (offensive system).”

Rehkow saw the inner-workings of the AAF and XFL. He was impressed with the latter’s advanced facilities, multitude of focused two-a-day practices in training camp, timely pay and fan connections — made evident by the league’s viral and amusing Bud Light Seltzer promotions, which had winning teams perform a locker-room skit centered around the beverage. In one instance, Rehkow lateraled a can back from his holding position.

For the Roughnecks, there was only winning. Rehkow had a leg in a few, including a 27-20 decision March 1 at Dallas, when a 60-yard second-half boot in 25-mph winds pushed the Renegades inside the 20-yard line for their next drive, which ended with a strip-sack and recovery for a Houston touchdown. Against St. Louis on Feb. 16, Rehkow opened the fourth quarter with a kick finessed inside the 1, creating an XFL Twitter highlight and killing a Battlehawks possession in a 28-24 victory.

“It’s hard in punting, because you don’t think about it in the moment, but anytime you put one inside the 20, or someone muffs it, you can turn the momentum back in our favor,” he said.

Rehkow’s unit adjusted well to the new football — with a different “sweet spot” than normal, and a rubbery feel — and XFL rule changes. No one could cross the line of scrimmage until the ball was kicked, which motivated punters to sky kicks shorter for fair catches and save some yardage. The group finished the year third in net average at 37.4 yards.

On March 12, the XFL canceled the season, paid for players’ flights home and freed them to sign with NFL teams. The league also will maintain base pay for its players.

When it starts back up again, it’s possible Rehkow will be on board. Now, the focus is on family and school.

“We’ll see how it plays out, but if I can balance both, I’d be back in a heartbeat,” he said.