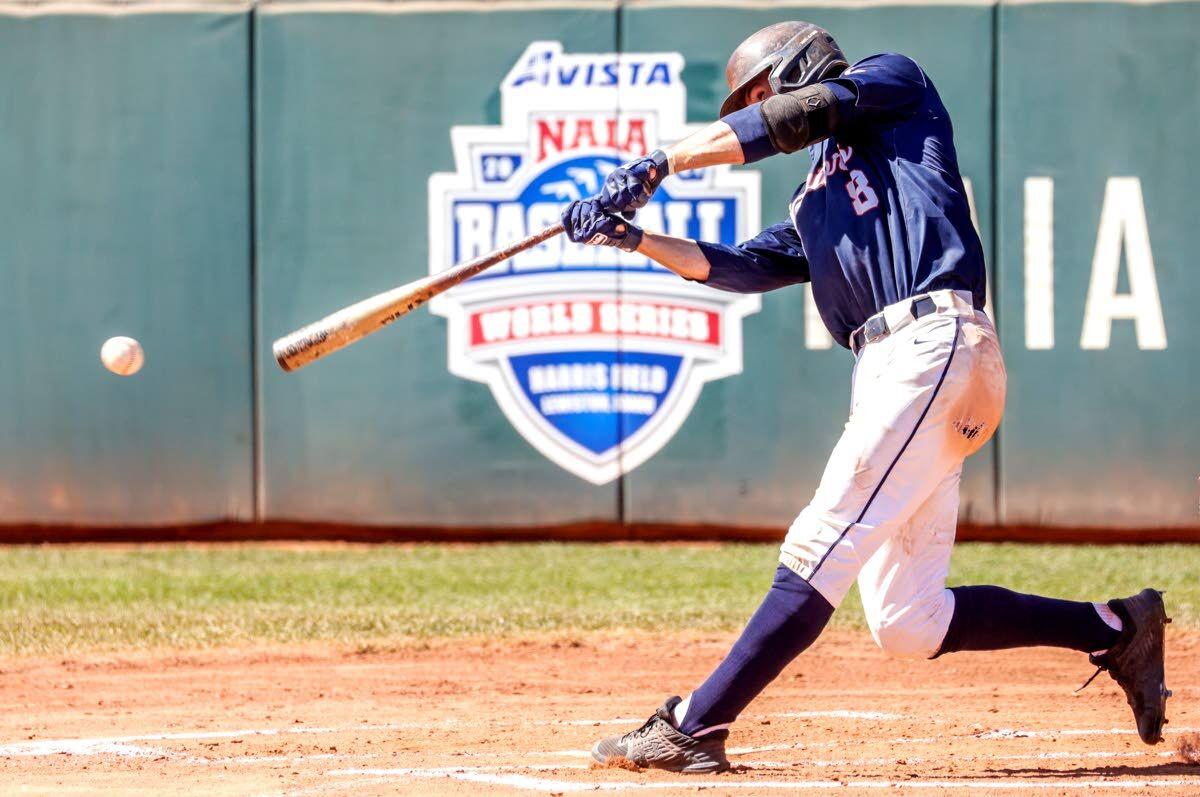 Lewis-Clark State’s Jack Johnson makes contact with a ball during a June 2 NAIA World Series baseball game against Central Methodist. Johnson played for the Warriors for two seasons, and was named to the Series all-tournament team. 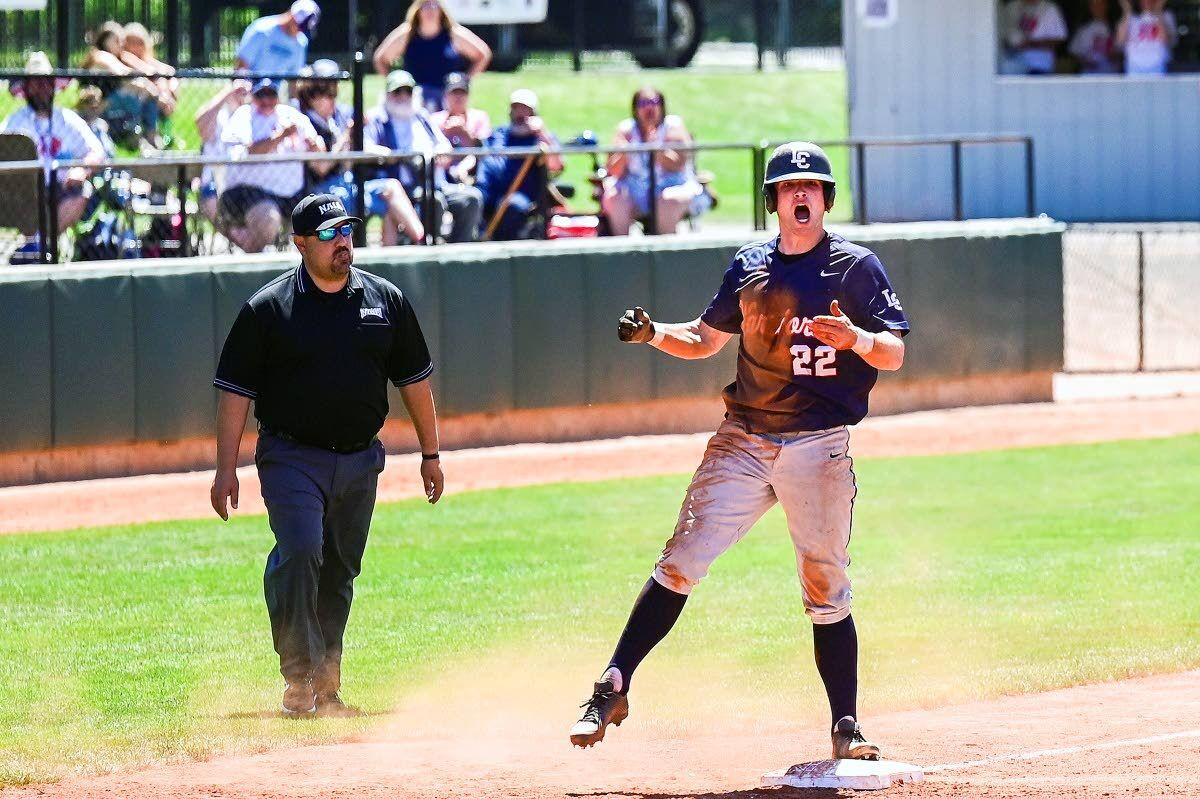 Lewis-Clark State's Aidan Nagle celebrates after hitting a three-run triple during a May 29 NAIA World Series game against Concordia (Neb.) at Harris Field. Nagle hit .384 this past season for the Warriors.

Lewis-Clark State’s Jack Johnson makes contact with a ball during a June 2 NAIA World Series baseball game against Central Methodist. Johnson played for the Warriors for two seasons, and was named to the Series all-tournament team.

Lewis-Clark State's Aidan Nagle celebrates after hitting a three-run triple during a May 29 NAIA World Series game against Concordia (Neb.) at Harris Field. Nagle hit .384 this past season for the Warriors.

Although Lewis-Clark State couldn’t end the title drought and tack up banner No. 20, the Warriors proved their point.

They still clearly belong in the national conversation, playing annually alongside small-college baseball’s best in the Avista NAIA World Series.

There have been many gripes from outside the valley about the Warriors’ automatic bid to the Series, their lack of an Opening Round qualifying tournament, and the absence of consistently challenging competition in their lower-tier Cascade Conference.

Despite all that, LCSC looked like one of the stronger teams in this Series. The No. 3 seed Warriors made a commendable showing, posting a 3-2 record. They claimed three consecutive loser-out victories before running out of steam in the semifinal round against eventual runner-up Central Methodist (Mo.).

Under third-year coach Jake Taylor, LCSC remains an NAIA heavyweight. That’s a certainty. But the Warriors now will need to prove such on a more regular basis — not just at the Series.

The school will stage a five-team Opening Round in mid-May, beginning next season. The Warriors no longer have a month of prep time between the end of their regular season and the start of the Series.

A World Series in Lewiston without the navy tops? That’d be bizarre.

The degree of difficulty will increase exponentially. To add another championship, LCSC needs to win a handful of games in a double-elimination Opening Round against Series-level foes, then win a handful more at the Series.

That won’t frighten next year’s Warriors, who should be comparably talented, yet with a few big shoes to fill.

Headlining the departing stars is veteran first baseman Brock Ephan. He finished the year leading the team in most offensive categories — a .406 batting average, an .827 slugging mark, 20 homers and 82 RBI (fifth nationally). Ephan was named a second-team All-American by the NAIA on Tuesday.

Several Warriors elected to hang in Lewiston for another campaign after the 2020 season was trimmed to 20 games by the coronavirus.

“We’ve been grateful for this group,” Taylor said after LCSC was knocked out of the Series. “They truly enjoyed being around each other. You could tell by all the tears at the end. They cared about each other.

“We couldn’t ask for more. We couldn’t be more proud of them. Obviously, we wanted to keep winning games. We ran out of gas, but we gave it everything we had. We competed hard.”

Provided everyone else sticks around and doesn’t take an early pro deal or something, then the prospects look all right.

The silky smooth duo of valley kids Riley Way and A.J. Davis will hold down the middle infield for a fifth season. Power-packing Lewiston High School grad Luke White, a designated hitter throughout much of 2021, will shift to first base.

In the lineup, a replacement at third base and another outfielder are “team needs.”

As for the pitching staff? The Nos. 1, 2 and 3 options come back, experience in tow.

Eric Chavarria had a quality start at the Series, taming the explosive bats of top-seeded Southeastern (Fla.). Wazzu transfer Trent Sellers shut out Concordia (Neb.) and was an All-Series pick, and left-hander Alec Holmes will be expected to take a step forward.

Reliever GT Blackman made a strong case for All-Series as well after holding Faulkner (Ala.) in check during a tourney-opening defeat. He also entered to get the Warriors out of a nobody-out, bases-loaded jam in the bottom of the ninth against LSU Shreveport — a 9-6 LCSC win.

On paper, the bullpen appears relatively deep, but someone will have to break out as more reliable, or L-C must sign an extra couple of arms.

The Warriors seemed to run out of sound pitching alternatives in their loss to CMU.

LCSC surely needs to make a few major moves in recruiting to prove itself in the Opening Round, then improve upon its most successful Series showing since 2017, when the program last won it all.

The Warriors compiled a 44-6 record this season, at one point winning 22 games in a row. Their winning percentage of .880 was the program’s highest in 11 years.

“I hope, after they put some distance on it, they’ll look back and be proud of the remarkable season we had,” Taylor said.