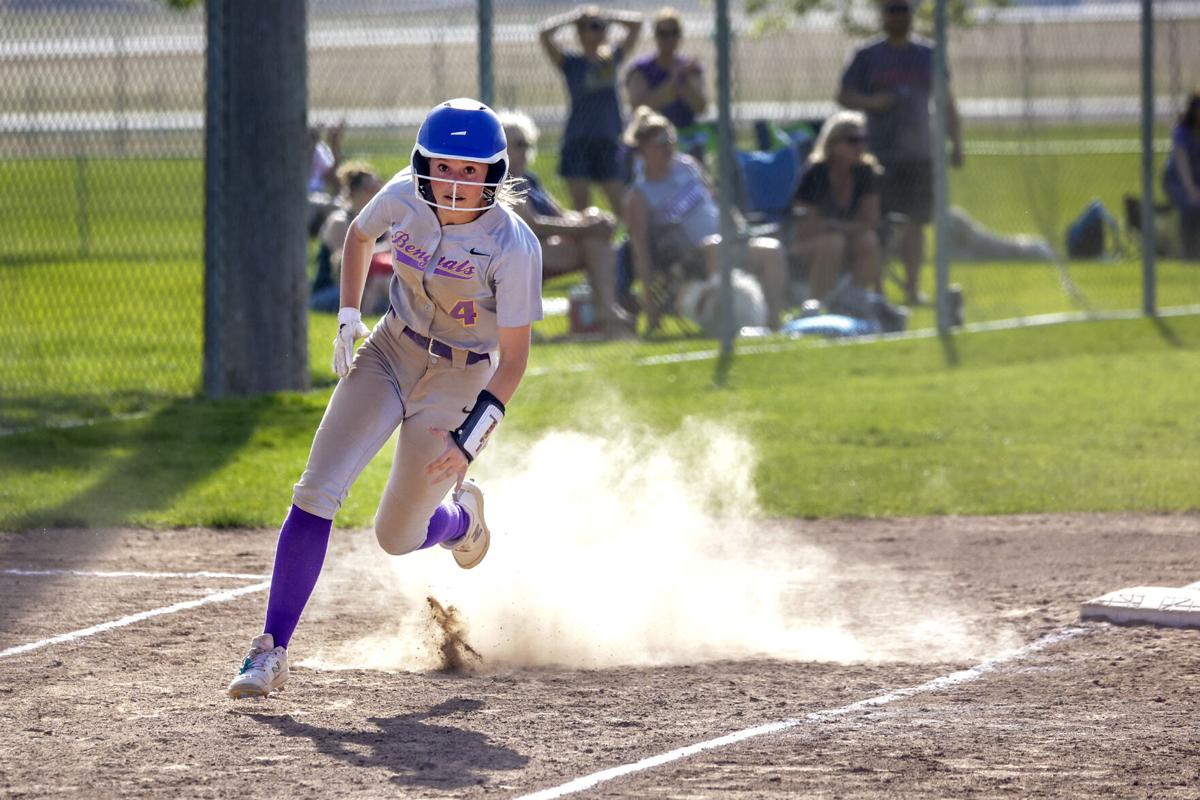 Lewiston right fielder Morgan Williams has her eyes set on home plate as she scores the game-winning run Tuesday in the Bengals' Game 1 win against Post Falls in an Inland Empire League doubleheader that gave Lewiston the top seed in the Class 5A district tournament that starts this Tuesday at Airport Park. 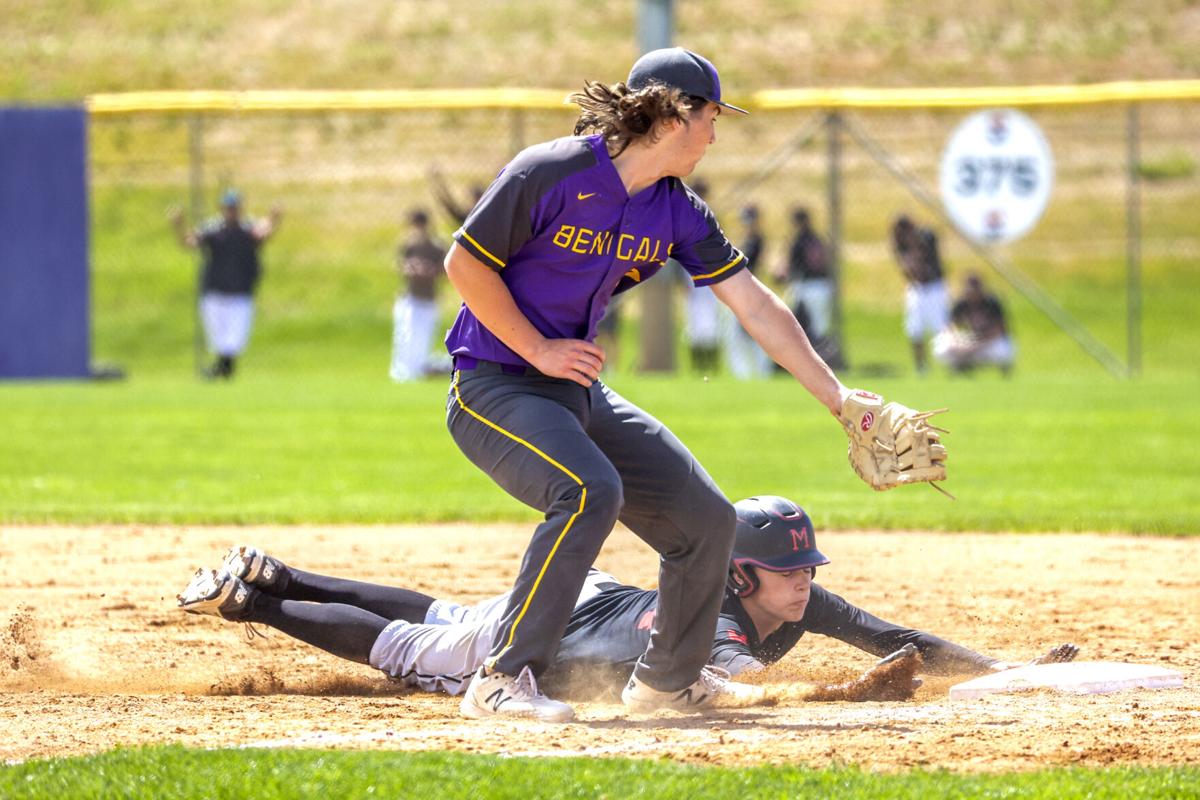 Lewiston right fielder Morgan Williams has her eyes set on home plate as she scores the game-winning run Tuesday in the Bengals' Game 1 win against Post Falls in an Inland Empire League doubleheader that gave Lewiston the top seed in the Class 5A district tournament that starts this Tuesday at Airport Park.

Almost 10 months ago, not many people thought we'd be at this juncture. But, here we are.

Idaho's high school sports season is sprinting toward the finish line the next two weeks as the spring athletic campaign is coming to the end, with district events taking place this week and state tournaments at the end of next week.

And several local teams have their eyes set on the ultimate prize: a coveted state champion.

That all begins Monday, when the district baseball and softball tournaments start in the area.

At the head of the list, the Lewiston softball team, which will carry the No. 2 ranking in the final state coaches poll into the Class 5A district tournament. The Bengals (19-5), who have won seven consecutive games, will host the event at Airport Park beginning at 2 p.m. Tuesday with contests on two different fields.

Lewiston, which won the Inland Empire League title with a victory in Game 1 of a doubleheader Wednesday at home against Post Falls, will have its full complement of players for the event after the Barney sisters, Taryn and Loryn, were suspended for unspecified reasons for the final three regular-season games. Taryn leads the team with a .629 average, 10 home runs and 49 RBI in 21 games played. She has a .675 on-base percentage and an eye-popping 1.400 slugging percentage. Taryn also has 14 doubles and five triples on the campaign. Meanwhile, Loryn is third on the team with a .432 average, second in homers with three and has driven in 20.

The hero of the win against the Trojans, senior Samantha Mader, is hitting .395 with eight of her 17 hits on the season for extra bases. But where the senior is best is in the circle. She has struck out 116 batters in 73 innings this season.

In Class 1A, Potlatch (15-1) has put it all together and went on an impressive run in the Whitepine League, running the table in 12 games and not losing since a 19-2 decision at Moscow on April 8 in the back end of a doubleheader. Since then, coach Dean Butterfield's team has won 14 consecutive games with an average margin of victory of 12 runs per game. The Loggers are the top seed in the district tournament that begins Tuesday at host sites, then shifts to Genesee's North and South fields on Thursday.

Jeff Martin's Prairie Pirates opened the season with seven consecutive wins before finishing 13-4 overall and with the No. 2 seed in the district. They've lost three of their past five, and were swept by Potlatch in a doubleheader Friday.

The storylines are plentiful this year in baseball.

It took a doubleheader sweep at Sandpoint on Tuesday by Moscow for the Bears (11-8) to sneak in as the No. 1 seed in the Class 4A district tournament, as Barrett Abendroth's six hits in the two games fueled Moscow's 11-7 and 13-4 wins.

Moscow will host the event, which begins at 3 p.m. Tuesday at the Moscow School Community Playfields with the second-seeded Bulldogs playing third-seeded Lakeland in a play-in game. The winner will face the Bears at 5 p.m. the same day in Game 1 of a best-of-3 championship series.

Lewiston's baseball team had everything it needed to win the Inland Empire League on Tuesday, The Bengals (13-5) beat Post Falls in Game 1 at Church Field, and just needed to beat the Trojans in the second game to claim the No. 1 seed in the Class 5A district tournament. However, Post Falls managed to win the nightcap to earn a split and the top spot. So Lewiston, which has the No. 2 seed, will host Coeur d'Alene at 4 p.m. Monday, with the winner advancing to Tuesday's 4 p.m. championship game. If Post Falls beats Lake City, the Trojans would host the title game. If the Timberwolves pull off the upset, the winner of the game between the Bengals and Vikings would host.

Class 1A is intriguing as well. It took a win by Prairie on Thursday against Clearwater Valley for the Pirates to clinch a share of the Whitepine League title. And Prairie did it, but the Rams made it a nailbiting experience.

The Pirates (11-4) were up 8-0 heading to the top of the seventh, but Clearwater Valley (12-7) scored seven times, including a grand slam by Connor Jackson, before Travis Alfrey got the final two outs for Prairie, which earned a first-round bye and will play at 3:30 p.m. Thursday at Orofino. The loss knocked the Rams all the way down to the third seed, and they will host a play-in game at 4:30 p.m. Tuesday against Kamiah.

High schools on this side of Washington state also will begin its culminating events this week. Pullman's baseball team is the cream of the crop, racing through the Class 2A Greater Spokane League with an unblemished 11-0 mark. The Greyhounds will host East Valley in the first of a two-game district tournament at 4 p.m. Thursday.

Clarkston's softball team finished fourth in the league, and will play at No. 1 seed Shadle Park at 4 p.m. Monday. Softball also will be a two-game culminating event.

A two-day GSL tennis tournament begins Friday, while the "winter" sports season, with basketball and wrestling, is expected to begin May 18.