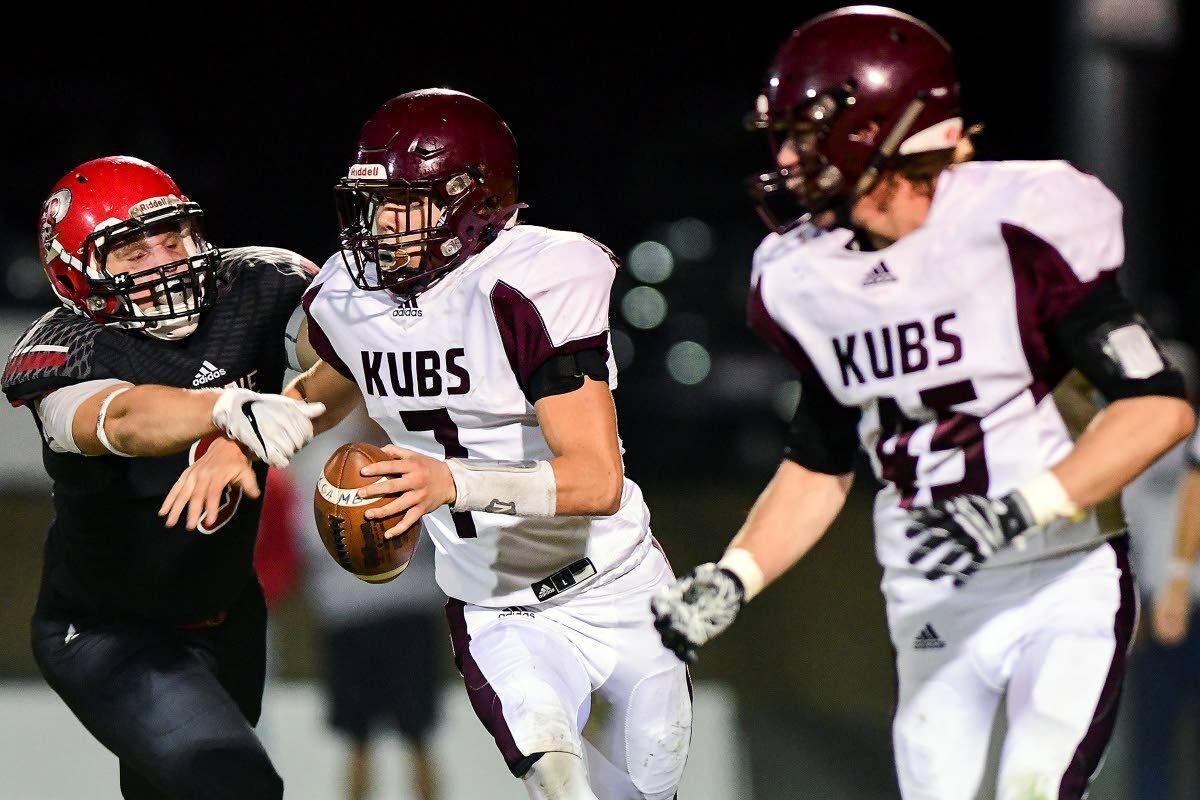 Prairie’s Dean Johnson attempts to sack Kamiah quarterback Gabe Eades during the second quarter of an Oct. 2 Whitepine League Division I game. The Pirates have won four state titles since 2008, and the league has claimed seven of the past 15 Class 1A Division I state championships. 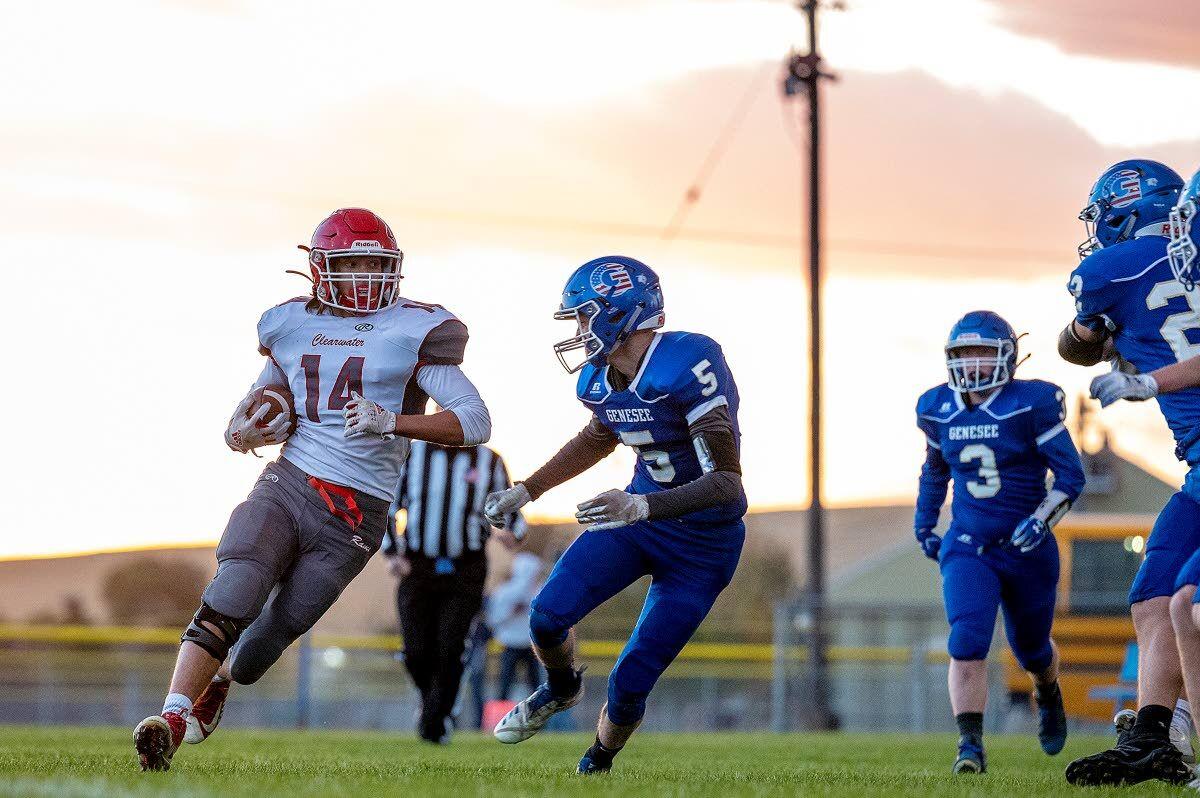 Clearwater Valley running back Dylan Pickering rounds the corner after taking a handoff as Genesee’s Cy Wareham looks to make a tackle during the first quarter of Monday’s Whitepine League Division I game. Four teams — Genesee, Prairie, Troy and Kamiah — have accounted for the league’s seven state championships since Class 1A Division I was established in 2004.

Prairie’s Dean Johnson attempts to sack Kamiah quarterback Gabe Eades during the second quarter of an Oct. 2 Whitepine League Division I game. The Pirates have won four state titles since 2008, and the league has claimed seven of the past 15 Class 1A Division I state championships.

Clearwater Valley running back Dylan Pickering rounds the corner after taking a handoff as Genesee’s Cy Wareham looks to make a tackle during the first quarter of Monday’s Whitepine League Division I game. Four teams — Genesee, Prairie, Troy and Kamiah — have accounted for the league’s seven state championships since Class 1A Division I was established in 2004.

Almost every November for the past 15 years, one of the final teams standing in the Idaho Class 1A Division I state football tournament has hailed from a 250-mile radius in north central Idaho.

Months earlier, during the summer that leads up to football season, many of the student-athletes that vie for those blue state title trophies spend full days bucking hay, driving combines or working other physically demanding agricultural jobs before heading to practice.

In some cases, they’ve been running the same plays with the same group of kids for a decade.

It all factors into the longstanding dominance of the Whitepine League, which has claimed seven of the past 15 state titles and has had a representative in the final 13 times since 2005.

“I think what makes it the most formidable (conference) is not necessarily the sports that the kids do. I think it’s so formidable because of the surrounding culture of the communities,” Genesee coach Alex Schnebly said. “If you look at a lot of these Whitepine towns, you have Potlatch and Troy, which are huge logging towns. Genesee is a huge agricultural community, along with Prairie (Cottonwood). Kamiah, (Kooskia), Lapwai, they kind of have that mixed bag of agricultural and logging as well. So it’s these backgrounds that these kids have in terms of … working hard and then immediately bouncing back to play sports.”

The Whitepine’s Genesee, Prairie, Troy and Kamiah have claimed state championships since the 1A DI classification was established in 2004. The conference had a state finalist every year from 2005-15, a run that finally ended when all Whitepine teams were uncharacteristically knocked out of the playoffs in the first round in 2016.

A year later, it was an all-Whitepine final between Prairie and Genesee.

While other Whitepine teams have had scattered seasons of glory, Prairie is a consistent title contender. The Pirates won their first championship in 2008 and have added four since.

Like many other successful programs, Prairie credits its steady success to its continuity throughout its peewee, junior high and high school teams. Athletes are indoctrinated in the same system for years until they reach high school, by which time the expectation is to have mastered the concepts and compete for a state championship.

“For us here at Prairie, it’s just about being consistent, doing the same thing and doing things over and over,” said Prairie athletic director Travis Mader, who coached the Pirates from 2005-11 and led them to their first state title. “Our plays are pretty much the same from junior high to high school and even all the way down to our peewee program. Our numbering, assignments, all that stuff stays the same.”

Prairie was nowhere near title contention when Mader took charge. In fact, he said, discontinuing the football program was an option.

But since things got rolling in 2008, it’s been hard to top Prairie. The Pirates have won three state titles in the past six years, more than any other team in all of Idaho during that span.

Legs can get weary by the time those fifth quarters roll around, especially in eight-man football, where the best players almost always have full-time roles on offense and defense.

That’s where conditioning — and toughness — come into play.

Although it’s rare for an eight-man football player to hit the big stage, Dallas Cowboys star linebacker Leighton Vander Esch has challenged the norm. He hails from Salmon River High School in Riggins, an erstwhile powerhouse in 1A Division II that peaked with four state titles in five years in the mid-2010s.

“I think if colleges looked more at eight-man football, I think they would see a lot more talent,” Schnebly said. “These are a great group of kids with a hard work ethic that could really (translate) to any college level.”

Heading into the final stretch of this season, Prairie (5-0) is the unanimous No. 1 team in the most recent 1A DI state media poll. But Kamiah (5-1) was the only other Whitepine League team to receive votes, and it wasn’t enough to crack the top five.

“We have a very competitive league up here,” Hutchens said. “I feel like a lot of us don’t get as much respect from the South as we should.”

But the league’s pedigree speaks for itself, and chances are good that there will be another Whitepine team fighting for a title come this November.