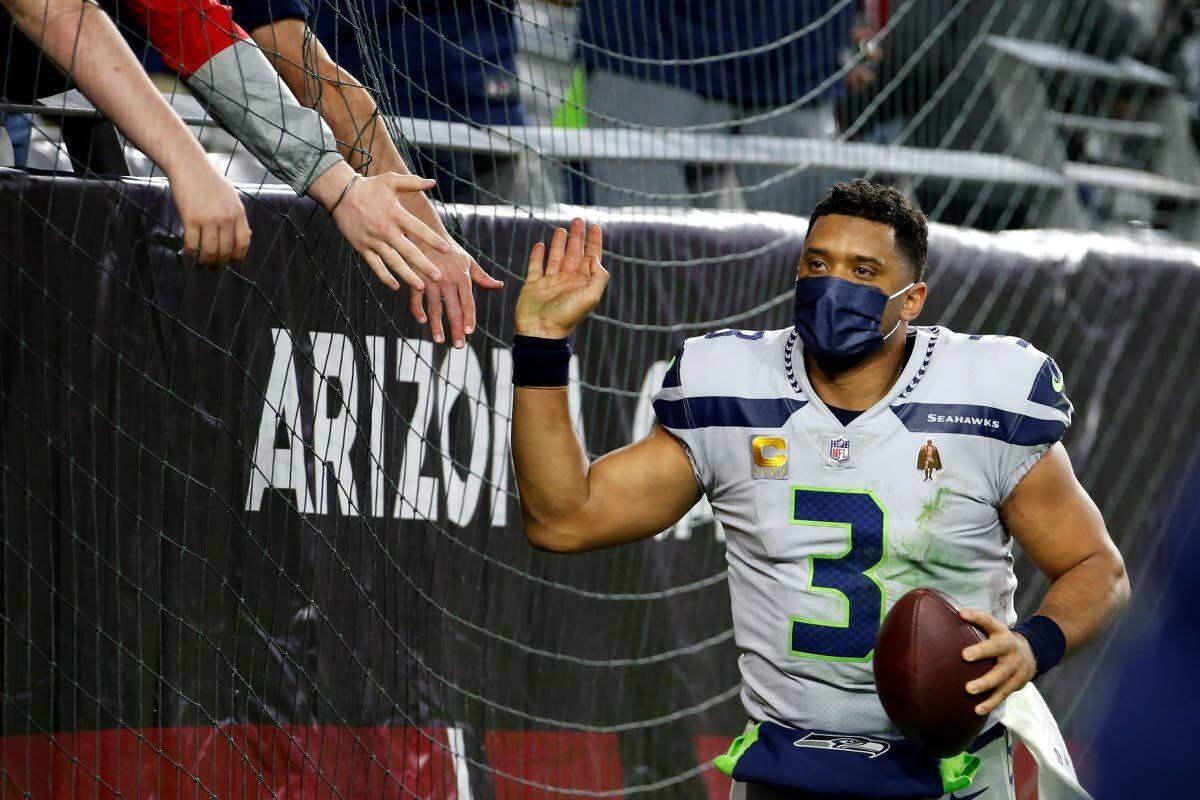 Seahawks quarterback Russell Wilson gets high-fives from fans after Seattle defeated the Cardinals on Sunday in Glendale, Ariz. 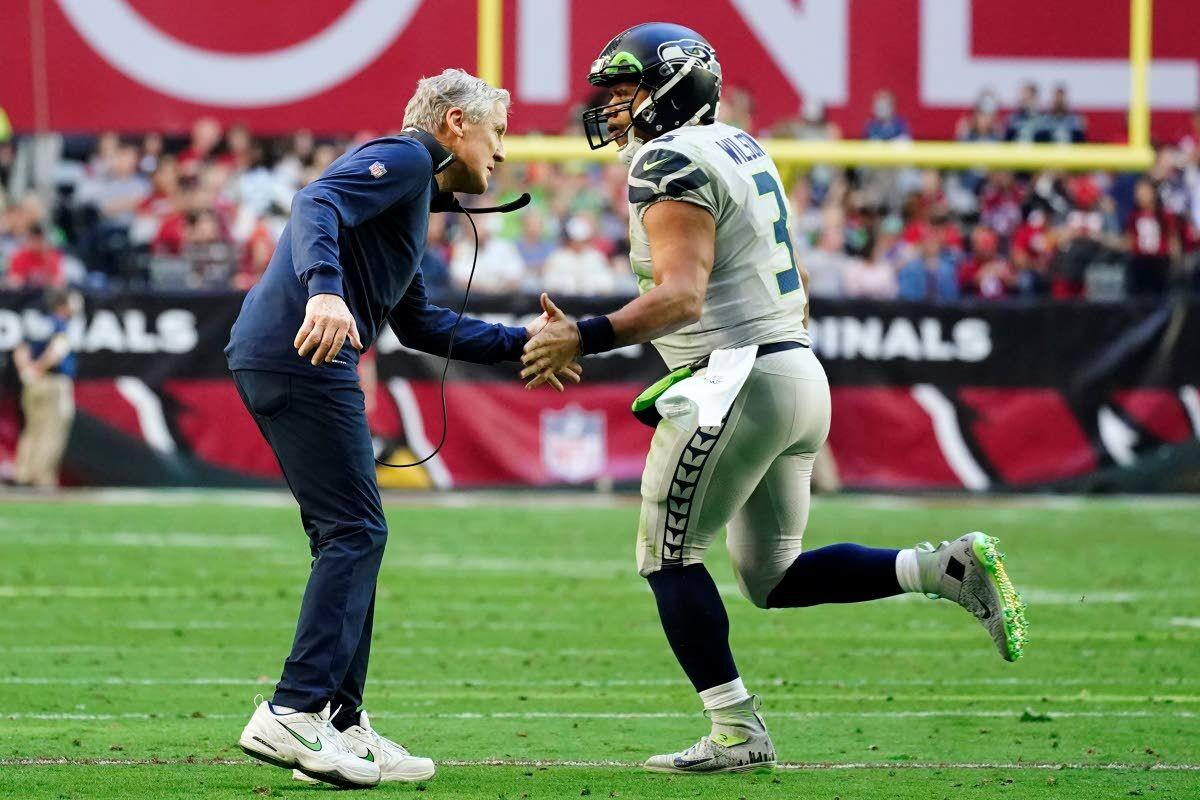 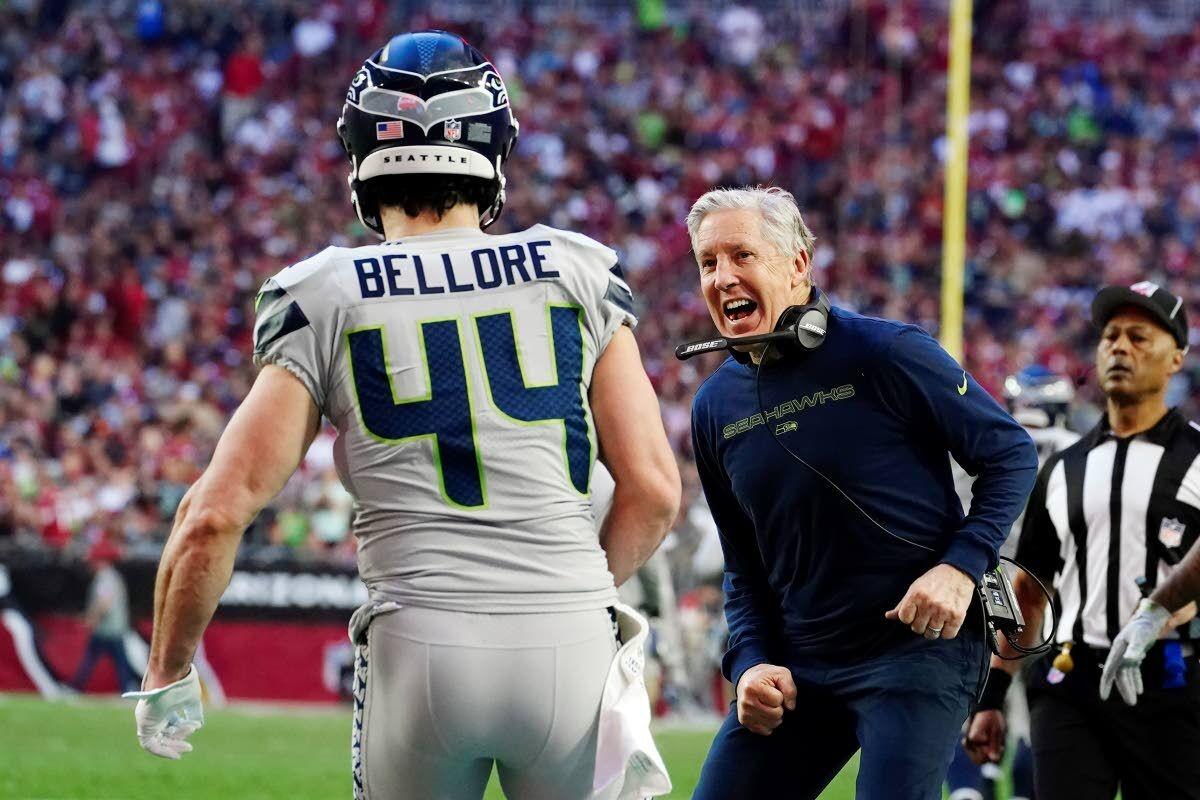 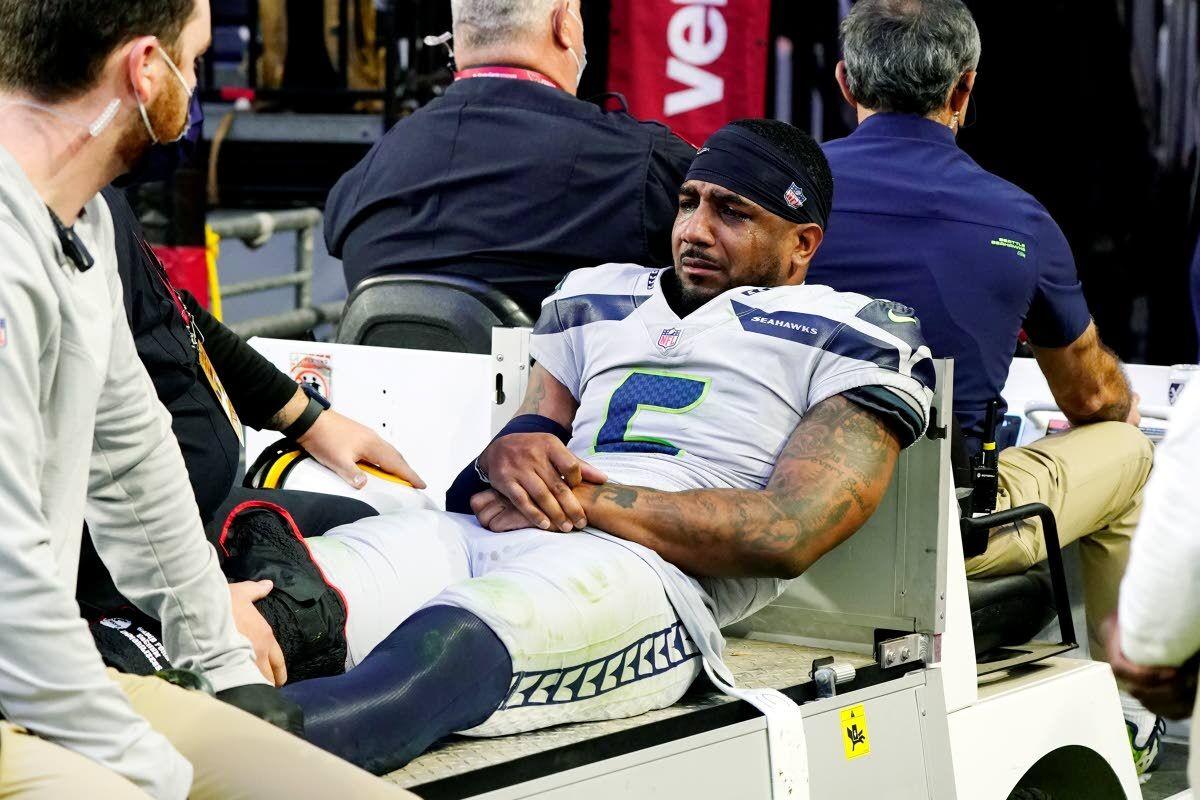 An injured Seattle Seahawks free safety Quandre Diggs is carted off the field during the second half of an NFL football game against the Arizona Cardinals Sunday, Jan. 9, 2022, in Glendale, Ariz. (AP Photo/Darryl Webb) 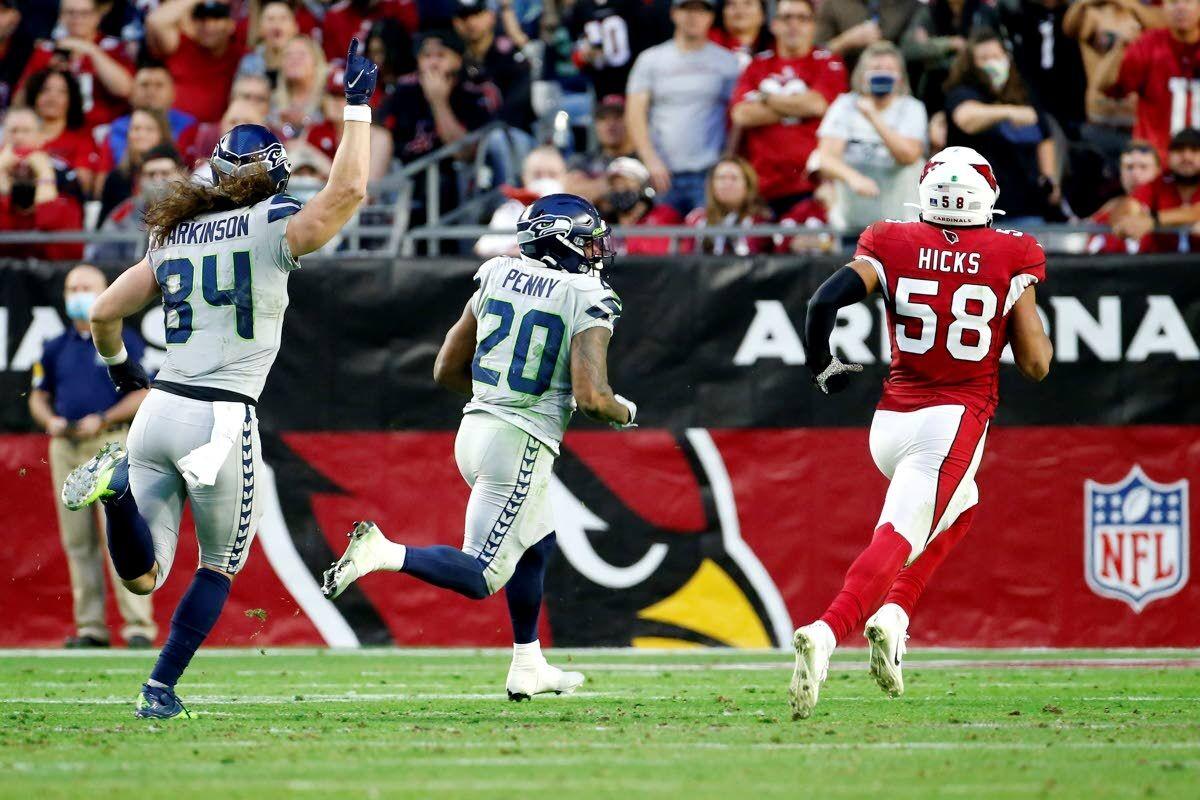 Seattle Seahawks running back Rashaad Penny (20) runs for a touchdown as Arizona Cardinals outside linebacker Jordan Hicks (58) and Seahawks tight end Colby Parkinson (84) look on during the second half of an NFL football game Sunday, Jan. 9, 2022, in Glendale, Ariz. The Seahawks won 38-30. (AP Photo/Ralph Freso)

Seahawks quarterback Russell Wilson gets high-fives from fans after Seattle defeated the Cardinals on Sunday in Glendale, Ariz.

An injured Seattle Seahawks free safety Quandre Diggs is carted off the field during the second half of an NFL football game against the Arizona Cardinals Sunday, Jan. 9, 2022, in Glendale, Ariz. (AP Photo/Darryl Webb)

Seattle Seahawks running back Rashaad Penny (20) runs for a touchdown as Arizona Cardinals outside linebacker Jordan Hicks (58) and Seahawks tight end Colby Parkinson (84) look on during the second half of an NFL football game Sunday, Jan. 9, 2022, in Glendale, Ariz. The Seahawks won 38-30. (AP Photo/Ralph Freso)

RENTON, Wash. — After the first losing season in more than a decade it seems as if there will, or should, be changes coming for the Seattle Seahawks.

The unknown is how deep those changes will go and how involved owner Jody Allen will be with the direction moving forward.

Could they be massive and possibly include head coach Pete Carroll, general manager John Schneider, or quarterback Russell Wilson? Maybe. More likely is that there are superficial tweaks and the group that has led Seattle to the longest run of success in franchise history remains intact for another season.

“She wants to make sure that we’re doing everything we can possibly do to get everything right,” Carroll said of Allen, who oversees the estate of her brother Paul Allen since his death in 2018. “She’s a terrifically competitive person in that regard and she doesn’t want any stone unturned. Exactly the way I look at it. I just feel so connected to that thought that that’s what we do.”

Seattle finished off its disappointing 7-10 season with a 38-30 win over Arizona on Sunday. Expected to be contenders in the NFC West, the Seahawks were left to play meaningless games at the end of the regular season and missed the playoffs for just the second time since Wilson was drafted in 2012.

The first losing season since 2011 doesn’t necessarily equal a complete overhaul. Wilson, Carroll and Schneider could all return in exactly the same roles and Seattle would likely again be considered a contender in the NFC.

But if the Seahawks are to graduate from playoff contender and back into the realm of championship caliber, this could be the offseason of a more significant change.

“Who knows how wide the spectrum is of changes that will probably take (place), but something has to change,” wide receiver DK Metcalf said Monday.

Moving Wilson seems cleanest of any of the outcomes, however unfathomable as it may be to trade the franchise quarterback. Wilson could yield a significant haul of draft picks to go along with what the Seahawks already own, along with the chances of getting a developmental quarterback and clearing significant salary cap space in the future.

Wilson said all the right things late in the season about a desire to stay in Seattle and win additional titles with the Seahawks. And he has some control over the situation with a no-trade clause as part of his last contract.

“What I’m really super passionate about, obviously my goal is to win more Super Bowls and my plan is to win them here,” Wilson said. “It is that simple, so there is nothing else really other than that.”

Moving on from Carroll or Schneider — or both — gets trickier and would declare that the quarterback is at the center of how Seattle moves forward. Both are under contract for several more years and the buyout of their deals, plus bringing in their replacements, would be a hefty expense.

Or the status quo remains in place and ownership chalks up this season to being an outlier where Seattle played without Wilson for 3½ games because of an injury and the Seahawks were uncharacteristically bad in close games. Seattle was 3-5 in one-score games. They were 18-5 in one-score games the previous two seasons combined.

Everything with Wilson’s season has to be framed around the finger injury that cost him a month of games and impacted him for several weeks after he returned. After the opener, Wilson seemed to struggle finding his way in the system of first-year offensive coordinator Shane Waldron, only to look fantastic running the show late in the season.

Wilson finished with 3,113 yards passing, 25 touchdowns and just six interceptions. But his completion percentage and passer rating were both his lowest since 2017.

The biggest offensive decision for Seattle is Wilson. Right behind him is how Seattle retools its run game and if what Rashaad Penny showed the final five weeks earned him a return to the Seahawks and a decent payday. Penny closed his impressive final stretch with a career-high 190 yards against a good Cardinals’ run defense. He rushed for 714 yards and six touchdowns over the final five games. Penny will be a free agent, but the franchise tag could be an option for Seattle to explore if a long-term deal can’t be worked out.

The tenuous nature of free agency was defined by the dislocated ankle and broken leg suffered by safety Quandre Diggs in the fourth quarter on Sunday. Diggs, a Pro Bowl selection, will be a free agent in the offseason and was due a huge payday after Seattle opted not to sign him to an extension before the season. Diggs had a career-high 94 tackles and five interceptions.

Brown, 36, and Woods, 34, both said Monday they would like to continue playing.