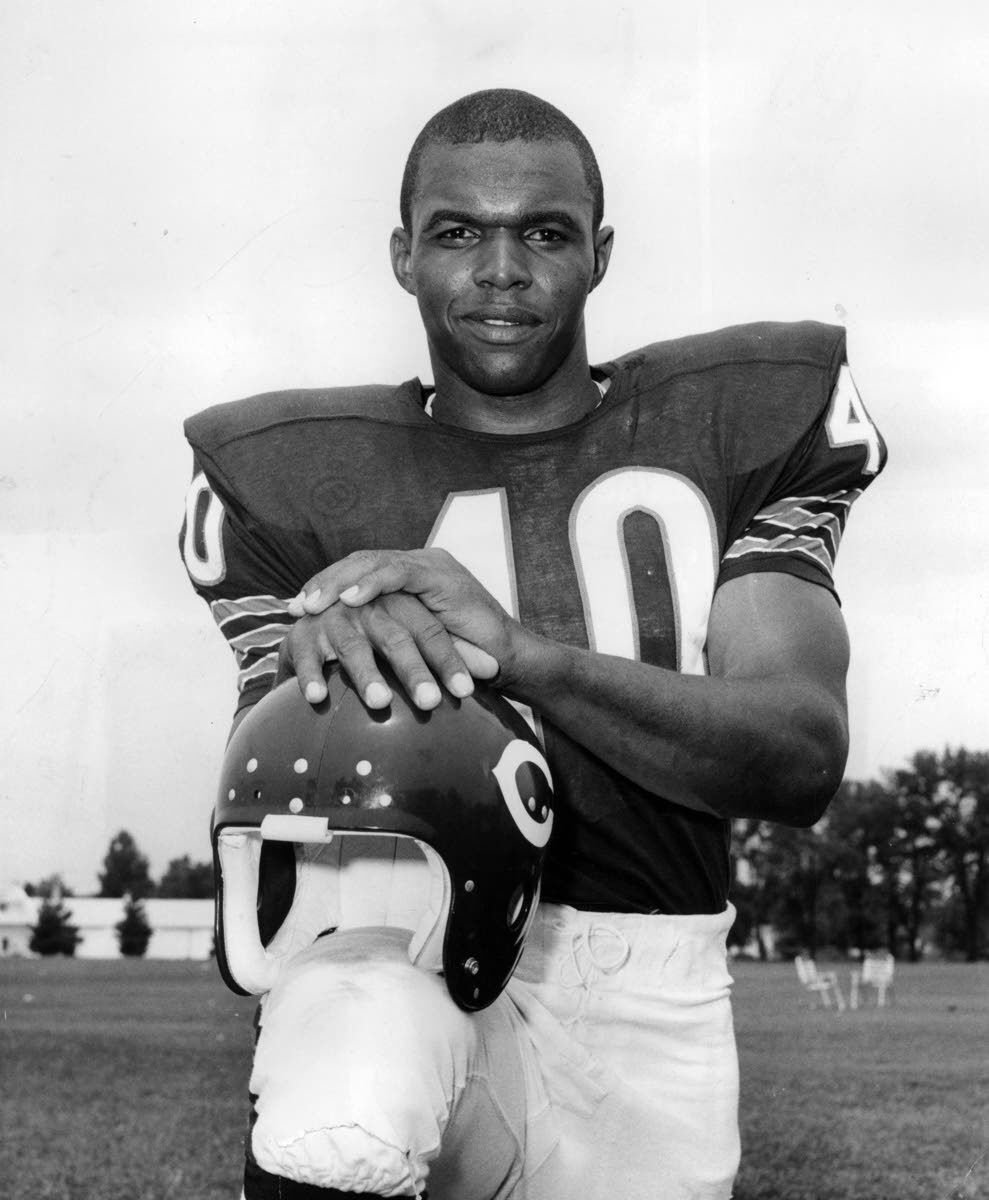 Gale Sayers poses for a photo while with the Chicago Bears in 1967. Sayers died Wednesday. 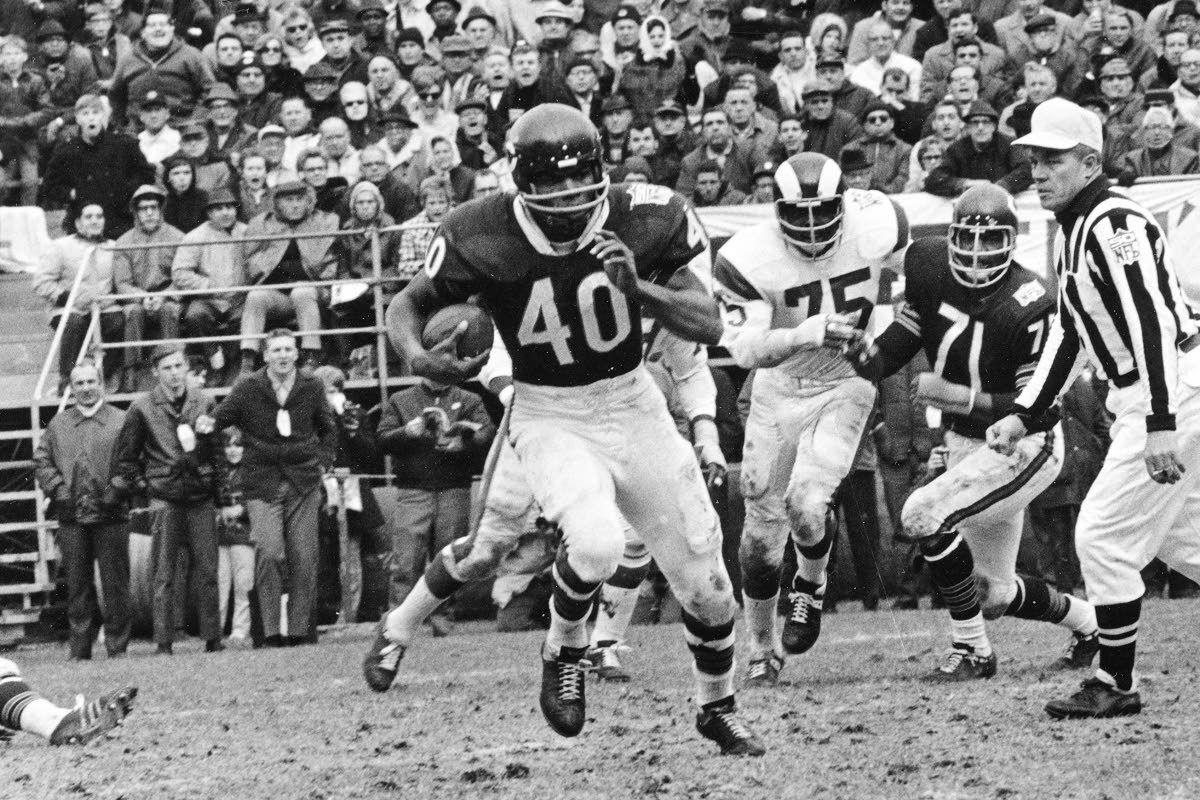 Gale Sayers (center) runs for a 28-yard gain during a 1969 Chicago Bears game against the Los Angeles Rams. The Hall of Fame running back died Wednesday.

Gale Sayers poses for a photo while with the Chicago Bears in 1967. Sayers died Wednesday.

Gale Sayers (center) runs for a 28-yard gain during a 1969 Chicago Bears game against the Los Angeles Rams. The Hall of Fame running back died Wednesday.

CHICAGO — The words of Gale Sayers that made every Chicago schoolboy cry actually were delivered by Billy Dee Williams, who played the Bears great in the TV movie “Brian’s Song.”

“I love Brian Piccolo, and I’d like all you to love him too.”

Delivering a speech in New York to accept the George S. Halas Award for courage, the movie version of Sayers paid tribute to his dying friend and teammate in a scene that crushed me and my brothers as we quietly watched in our living room and hoped Mom and Dad didn’t notice the tears falling down our cheeks.

Even to this day, just hearing the theme from the movie gets me verklempt.

Sayers died Wednesday, according to the Pro Football Hall of Fame.

As with many others who grew up here in the 1960s, Sayers was my first hero, an athlete so incredibly talented and enjoyable to watch, it made us forget just how bad some of those Bears teams were. He was unlike anyone we’d seen before. More than five decades later, we still can say the same.

The “Kansas Comet” was an obsession with Bears coach George Halas, who made him the fourth pick of the 1965 draft, right after selecting homegrown linebacker Dick Butkus at No. 3.

“I couldn’t stand to let Gale go elsewhere after I saw him make a totally unique move in a Kansas game film,” Halas said. “Gale started one way, left his feet and seemed to change direction in the air. When he landed, he was running the opposite direction. When I saw that move, I knew we had to get that young man.”

I never got a chance to see Sayers play in person at Wrigley Field, but we were fortunate enough to have a giant antenna on the roof of our house so we could watch the blacked-out home games from a South Bend, Ind., TV station.

The picture was grainy at times, but it didn’t matter. You didn’t need high-def to watch Sayers waltzing around defenders as if the laws of physics did not apply to him.

“I can’t define my running style,” Sayers once told former Tribune reporter Cooper Rollow. “Really, I don’t know where I’m going. I go where my feet take me. I like to think that if my blockers can get me 18 inches of clearance, I’ve got a shot at breaking a long one.”

That “18 inches of daylight” theme became a mantra of those NFL Films highlights that remain popular to this day on YouTube. While many other running backs put up better numbers, including the legendary Walter Payton, Sayers’ unique running style put him in a class by himself.

Sayers’ best day of running might have been at Lambeau Field in 1968, when he rushed for a career-high 205 yards. But his record-tying six-touchdown performance against the San Francisco 49ers at Wrigley in his rookie season is the one most Bears fans point to when trying to explain his greatness to nonbelievers.

Cutting in the mud like he was skating on ice, Sayers made Dec. 12, 1965, a day no one in Chicago would ever forget. Amazingly, Sayers could’ve had one more touchdown and the record all to himself, but Papa Bear took him out late in the game with the Bears on the 49ers’ 3-yard line.

Sayers was low-maintenance as well. In their book “The Twins: The Journey of a Lifetime,” former Bears ball boys Carl and Tony Ruzicka recalled that one of Carl’s jobs that afternoon was to clean the players’ spikes when they came off the muddy field.

“As the players sat on the bench extending their legs, Carl would go down the line scraping all the shoes he could,” the Ruzickas wrote. “One player motioned to Carl not to clean his spikes but to service the next player. That player was Gale Sayers ... (who) scored six touchdowns with mud caked at the bottom of his shoes.”

As with Los Angeles Dodgers pitcher Sandy Koufax, a stellar career shortened by injury could not prevent Sayers from being a no-brainer Hall of Fame pick, and in 1977 he became the youngest player inducted at age 34.

Despite Sayer’s unparalleled success and his popularity in Chicago, it took the Bears another 17 years to retire his No. 40, a decision that still boggles the mind. During the 1987 players strike, the Bears actually let a scab defensive back named Steve Trimble wear No. 40 because of an alleged “emergency.” They didn’t want to give out the numbers of Bears stars who were on strike, so they handed him the number no one had worn since Sayers’ retirement.

When asked that year why they didn’t retire the numbers of Sayers and Butkus, team president Michael McCaskey said: “It’s a difficult thing to retire a jersey on this team because of our long history and how many numbers have been retired.”

It was a bogus excuse, and the Bears finally rectified that injustice in 1994, when they retired Sayers’ No. 40 and Butkus’ No. 51 on a rainy night at Soldier Field.

“It’s about time,” former Bears linebacker Doug Buffone said. “I thought those numbers should have been retired a long time ago.”

While Sayers’ highlights always will be must-see, I’d love to rewatch the TV movie about his friendship with Piccolo. Back in the day, a TV movie about a Chicago athlete you loved was enough to make the school day drag as you counted down the hours until it came on the air.

Like today, there was much racial strife at the time, and the film taught us lessons we never got to learn in school.

“In 1970 we were having some race problems, and the Vietnam War was going on and a lot of things were happening,” Sayers later told the Tribune’s Don Pierson. “But I think people saw that a Black and a white could get along together, could have a good time together and maybe be friends.”

The legacy Sayers leaves us is about more than numbers or highlight reels.

He taught us how to love one another.

Paul Sullivan is a sports columnist for The Chicago Tribune.