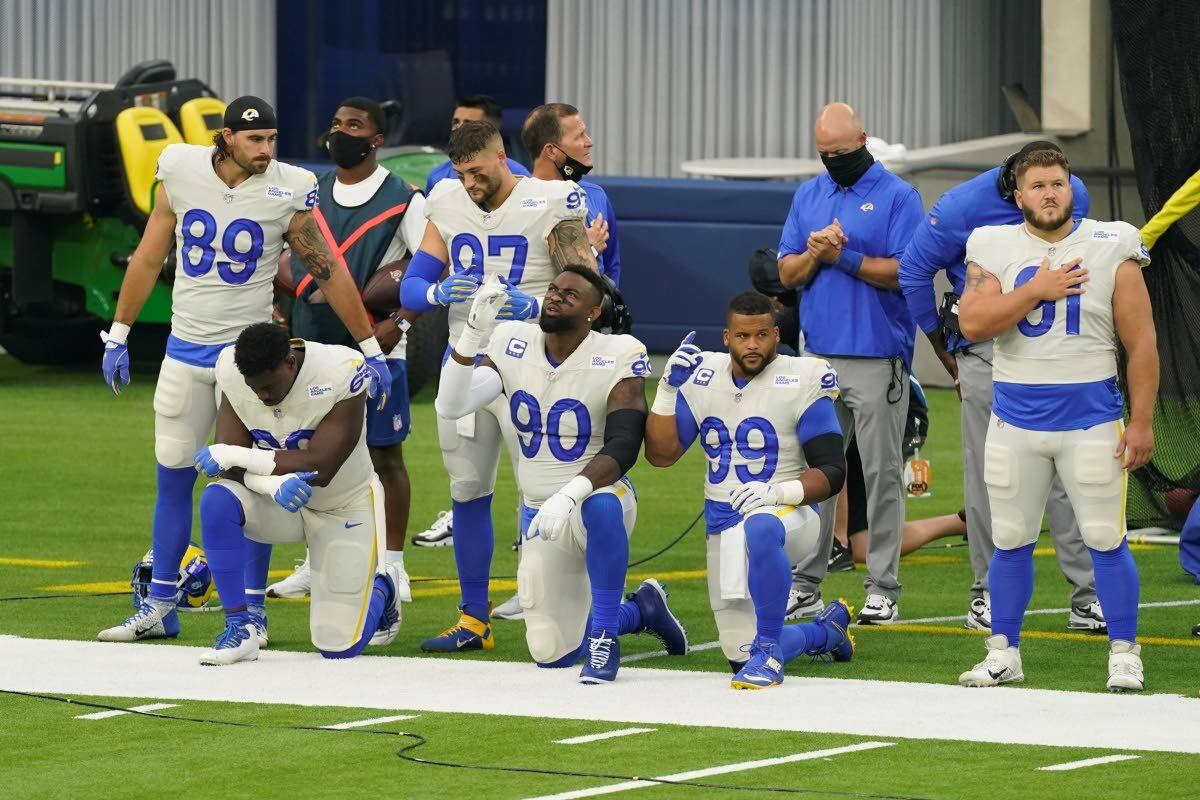 Members of the Los Angeles Rams stand and kneel during the national anthem before an NFL football game against the Dallas Cowboys Sunday, Sept. 13, 2020, in Inglewood, Calif. (AP Photo/Ashley Landis) 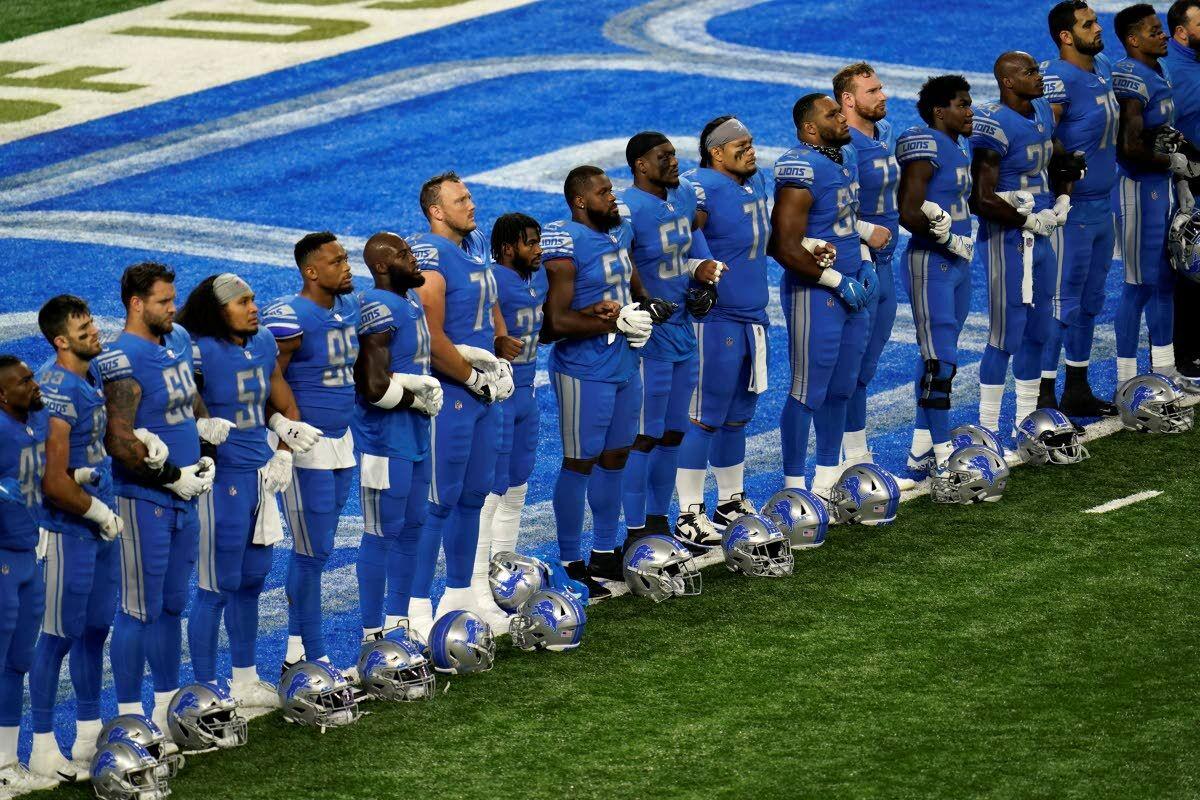 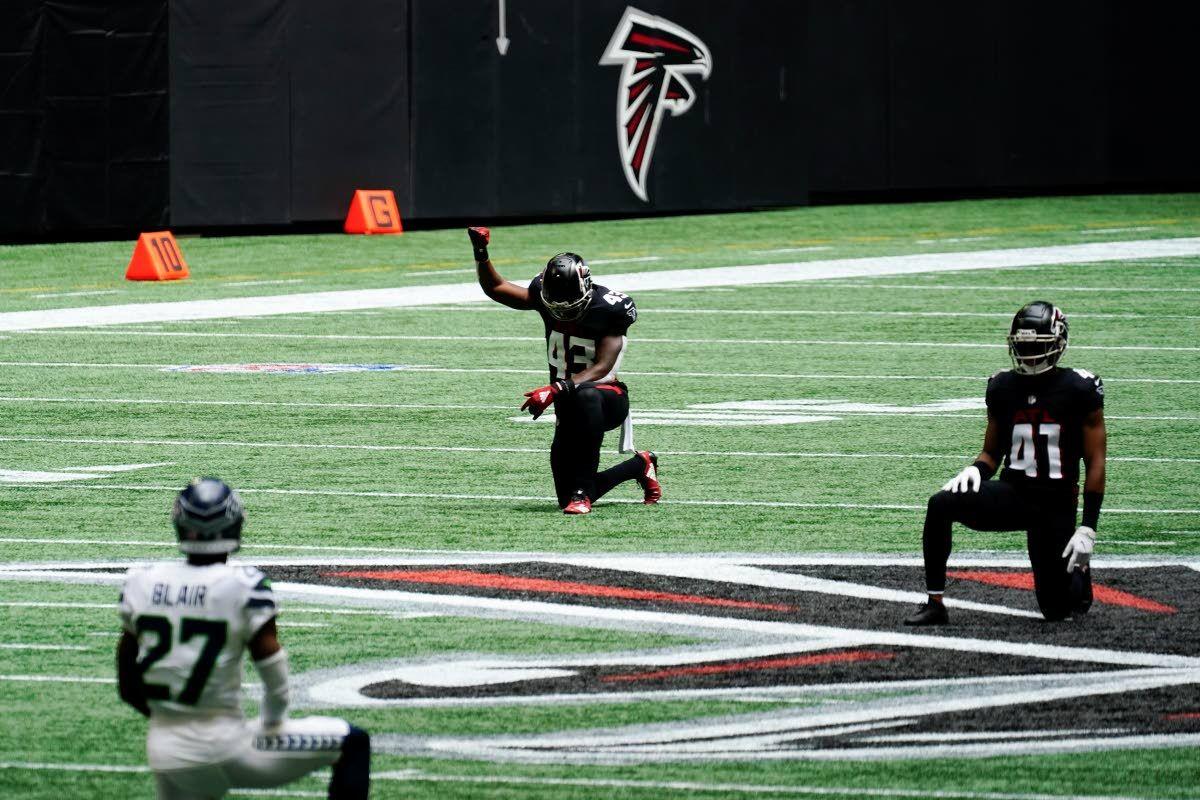 Players kneel in remembrance of Rep.. John Lewis, D-Ga., during the first half of an NFL football game between the Atlanta Falcons and the Seattle Seahawks, Sunday, Sept. 13, 2020, in Atlanta. (AP Photo/Brynn Anderson)

Members of the Los Angeles Rams stand and kneel during the national anthem before an NFL football game against the Dallas Cowboys Sunday, Sept. 13, 2020, in Inglewood, Calif. (AP Photo/Ashley Landis)

Players kneel in remembrance of Rep.. John Lewis, D-Ga., during the first half of an NFL football game between the Atlanta Falcons and the Seattle Seahawks, Sunday, Sept. 13, 2020, in Atlanta. (AP Photo/Brynn Anderson)

There’s a lot that can be said about an opening NFL week that featured a little of everything — except, perhaps, the positive coronavirus tests everyone feared most.

There was plenty of football, played at a surprisingly high level considering the circumstances. Plenty of protests too, but for the most part they seemed subdued in mostly empty stadiums.

There was a dazzling new $5 billion stadium in Los Angeles getting rave reviews in prime time Sunday. Two of the greatest quarterbacks of their time dueled each other in New Orleans.

There also was a bit of controversy on a call that could have cost the Dallas Cowboys their opener.

It’s just one week, and the sample size is relatively small. But it was the one week where everything could have gone wrong and didn’t.

Yes, stadiums were mostly empty — but it could have been worse. A lot worse.

The NFL rolled the dice and came up a winner, if only for one week. There’s no guarantee it can do the same for the next 15 weeks of the season, but there were a lot of people who never thought the league would get this far, either.

There’s still no real consensus on how social justice protests will play out, and there are real questions about how sincere the NFL is about putting the spotlight on them. Colin Kaepernick remains unemployed and far from satisfied as he called the NFL efforts “propaganda,” tweeting fellow protester Eric Reid remains blackballed by the league.

But players found different ways to get their message across, even if the league’s own efforts fell short in the eyes of some. Most notable was in Atlanta, where players on the Falcons and Seahawks dropped to one knee after the opening kickoff as the ball sailed through the end zone and in Minneapolis, where the family of George Floyd was on hand to watch the Vikings lock arms in the end zone as the Black national anthem, “Lift Every Voice and Sing,” was played.

Most importantly, perhaps, President Donald Trump remained largely on the sideline on the subject until most of the games were played.

“It’s a start,” Falcons running back Todd Gurley said after the game in Atlanta. “Are we going to keep doing this? ... You don’t want to make it a one-time thing — just like having a good game, and then the rest of the season you do nothing.”

Indeed, the first week might have been the easiest week for the players and the league, at least when it comes to demonstrating for social justice. It’s a volatile issue that remains largely unsolved, and how the players and their teams address it during the course of the season might look a lot different than it did in the opening games.

Then there’s the coronavirus, which could still ruin everything. That it didn’t during opening week is a testament to improved protocols, a ton of testing and the buy-in of players around the league.

There were no quarterbacks being suddenly yanked off the field before kickoff. No positive COVID-19 tests at all, in fact, which was the most remarkable stat since the NFL is doing 5,000 of them per day.

There were some wardrobe malfunctions, to be sure. Chiefs coach Andy Reid became an online meme with his fogged up visor, but what got more notice in league offices was the haphazard way some were wearing their masks on the sideline.

That led to a memo Monday stressing the importance of face coverings and warning that those who have them pulled down — like Rams coach Sean McVay — could face punishment from the league.

“Becoming careless or ignoring face covering and physical distancing requirements will put the 2020 season at risk,” the memo warned.

But other than the visors and masks, the first week of games looked pretty much like any NFL week. So did the football, which portends well for eliminating the entire preseason in future years as the league inevitably shifts to a 17- or even 18-game regular season.

The fake crowds sounded realistic on TV, and with few wide camera shots it was easy enough to forget there were no fans in most of the stadiums. Drew Brees vs. Tom Brady might not have been as exciting as anticipated, but that largely was because of a shaky first game for Brady under center for Tampa Bay.

The initial TV ratings were mixed, so it’s hard to tell how many people screaming they won’t watch the NFL again because of protests really won’t be watching.

Still, the first week is done. A season that seemed so uncertain for so long is underway.

Now, suddenly, a Super Bowl in February no longer seems out of the question.